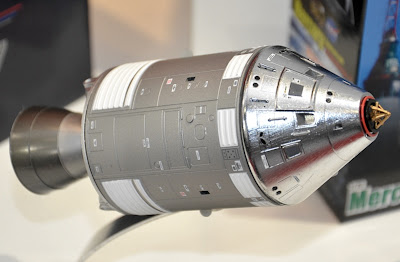 MAT IRVINE REPORTS
The Hong-Kong based company Dragon should be congratulated for introducing so many brand new factual ‘real-space’ items.


However my enthusiasm is slightly tempered by the fact that while Dragon issues spacecraft in both ready-built and kit form, sometimes it’s not clear as to which is which. Some are made only as ready-builts, some just as kits, others appear in both forms. Then some of the subjects - kits especially - have odd errors, and assembly instructions may rather lack clarity. 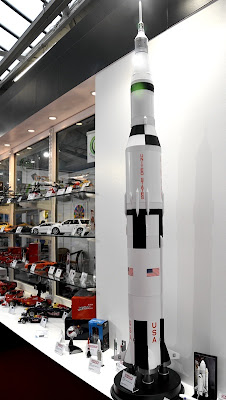 Mighty Saturn
Where ready-builts are concerned, the latter point may not matter much, and at London Toy Fair 2013, the UK-based distribution company Amerang had many of these on display. Dominating the display stand - literally - is the largest commercially-available ready-built model of the Saturn V rocket (above, below). The Dragon model of the launcher that sent men to the Moon is a 1:72 scale giant, standing more than 1.5m (5 ft) tall. 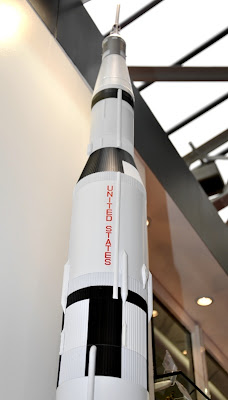 Bigger and bigger
At this point, I should add that there are larger flying versions of the Saturn V made, but for generally available ready-builts, this is the current record-holder. 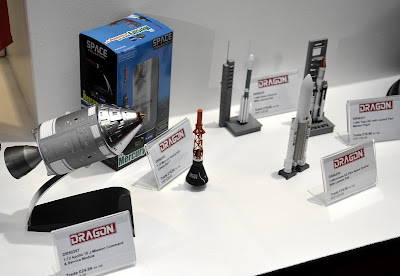 Capsules and mini-shuttle
Also on display from Dragon were the 1:72 scale Apollo Command/Service Module and Mercury capsules, though - somewhat oddly - the two-man Gemini capsule hadn’t been included. Apollo and Mercury are also available as kits, though the 1:72 scale Boeing X-37B automated mini-shuttle, used by the US Air Force for secret orbital missions, unfortunately isn’t. The pic above shows the 1:72 Apollo CSM and Mercury (left) with some of the 1:400 scale launchers on the right. 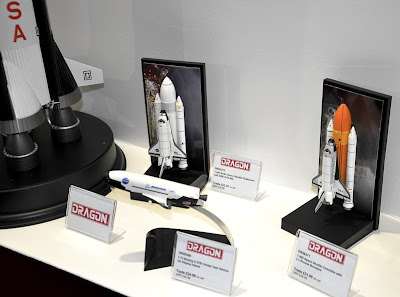 Smaller scale launchers
Other Dragon models concentrated on launch vehicles such as the Space Shuttle, Ariane 5, Titan IIIC, and the Proton D-Type. These models are all to the much smaller 1:400 scale, which may not fit with the previous items I mentioned, but they are all to the same scale, so work as a group and don’t take up much shelf space. 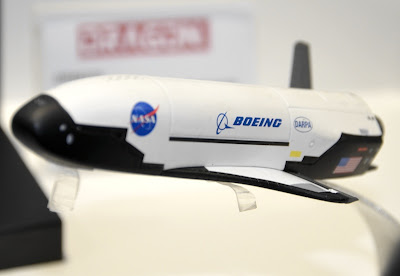 Secret spacecraft
The Boeing X-37 mini-shuttle (above) is now a veteran of several months-long military flights - in fact, its third top-secret orbital mission is underway as I write this.

*** SMN Note - A kit version of the Boeing X-37B would be good to see, especially if it included landing gear, and perhaps opening cargo bay doors with some sort of ‘top-secret’ military load. Even better would be if some ground crew were included, as official pix have shown technicians wearing science-fictional suits (below) which would be ideal for a mini-diorama. 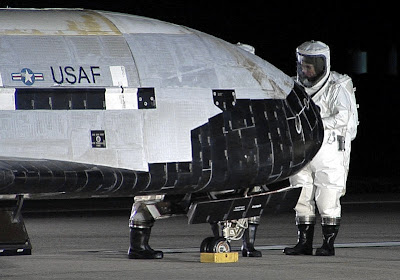