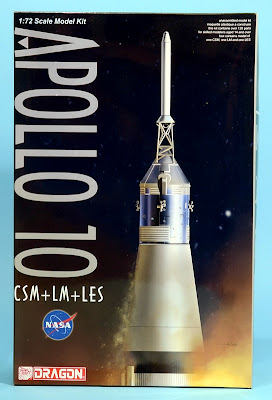 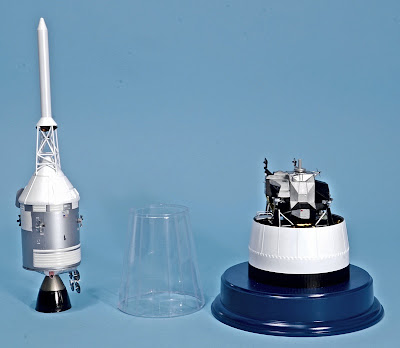 To the Moon
The kit represents what is often termed ‘the fourth stage’ of the Saturn V launcher - the crewed Command and Service modules (CSM) with Launch Escape System (LES) on top. Below the CSM is the Lunar Module (LM), encased in the conical Spacecraft Lunar Module Adaptor (SLA). 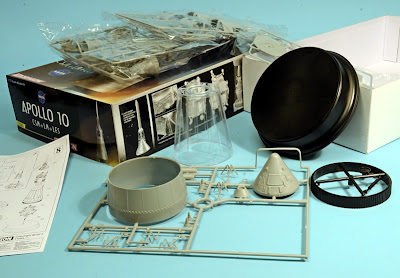 New components
The kit is based on the existing Dragon 1:72 scale CSM and LM, with a runner for the new parts. Also supplied is a new component for the Command Module’s Boost Protective Cover (BPC). This was the outer shell used at launch, and to which the escape tower was fitted. Parts are supplied in grey and clear, though note the SLA’s lower ring (right) is moulded in black, as is the circular stand, borrowed from Dragon’s Kirin range. 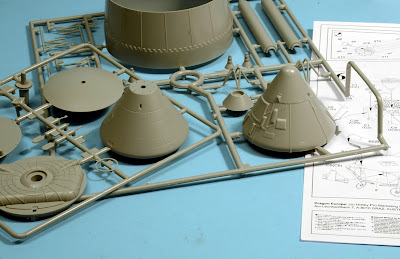 See inside
The upper section of the SLA is neatly moulded in clear styrene, so the Lunar Module can be seen inside, its landing legs neatly folded for launch. The 1:48 scale Revell kit of the same subject has realistic opaque parts, and they are hinged to be folded down for viewing. The 1:70 scale Tamiya kit is a closer match to this kit, but suffers, like the Revell, from being based on the earlier-design Block I SM, not Dragon’s correctly-moulded Block II version.


You don't actually have to include the Command Module - if the model is assembled as per instructions, it is hidden inside the Boost Protective Cover. 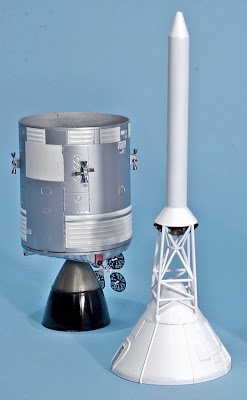 Quad antenna
Construction details for the CSM and LM follow previous Dragon kits, though there are assorted ‘oddities’ with these Apollo kits, the one here being the SM’s high-gain quad antenna, the dish structure at the end of the main SM body. Its flight configurations were probably glossed over when the kit was being planned, as the antenna can be built only in cruise mode, sticking out at 90 degrees - which means it won’t fit in the SLA. There’s an easy solution though - just cut off the support bar end, then cement it to hang parallel to the engine bell, dishes pointing inward. 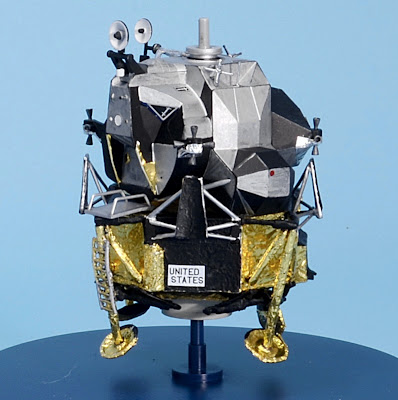 Assembled kit
The Dragon Apollo 10 kit has some 120 parts, and the finished model stands around 355mm (14in) high. It then sits on the circular base, taken from one of Dragon’s subsidiary trading brands, Kirin.

What’s in a number?
There is one other oddity, and that’s in the name. Exactly why does Dragon list the kit specifically as Apollo 10? While it isn’t suitable for Apollo 7 or 8, as those missions didn’t carry an LM, it suits any Apollo flight from Apollo 9 onwards. 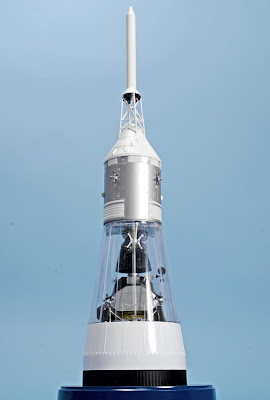 Summation
A useful addition to the ranks of Apollo kits, especially as it's in model aircraft standard 1:72 scale.

For more, see my article in the hardcopy Airfix Model World magazine, issue 23. 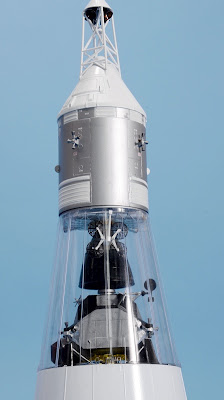