MAT IRVINE
Take one 1959 Miller-Meteor bodied Cadillac Ambulance, add an overloaded roof-rack, flashing lights and signs, and what ya gonna call it? The famed Ectomobile from the movie Ghostbusters II, that’s what. And now it's back again.

This four-wheeled star of the 1989 movie Ghostbusters II (preceded by Ghostbusters in 1984) was an obvious subject for one of the major ‘star car’ kit producers, AMT, and the company duly produced one in 1990. 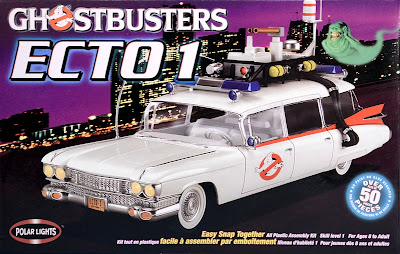 Rivals join forces
The lack of an original Ecto-1 kit was rectified in 2002 when Polar Lights made a snap-together model of it above). At that time AMT and Polar Lights were rivals, AMT still under the Ertl banner, while Polar Lights was a part of Playing Mantis. Since then, things have changed and both names have come together as Round-2 brands. 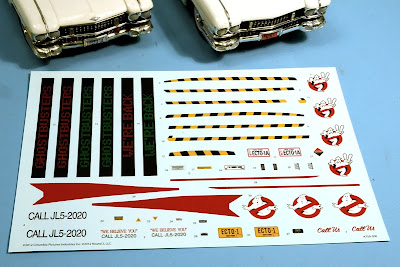 Which Ecto is which?
So the question is, despite the name on the new box, are we looking at a kit of Ecto-1 or 1a, as decals for both versions are included. Well, the answer's simple: it's an Ecto-1a vehicle, equipped with two sets of decals, including ones for Ecto-1. 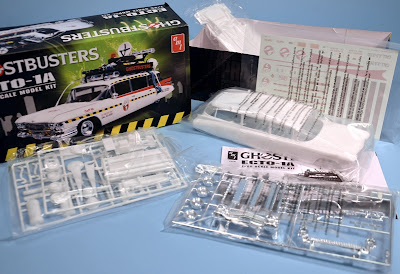 There are some instruction details that indicate building the Ecto-1 version, but this cannot really be done accurately, as the roof rack especially is completely different from one car to the other.

Accuracy
To the uninitiated, all seems to be in the box - 82 detailed components to 1:25 scale, which assemble nicely to make a vehicle some 250mm (10in) long. So that’s OK, then. But to make an accurate Ecto-1 you have to consider that while the basic centre-section is more or less the same, that’s about it. 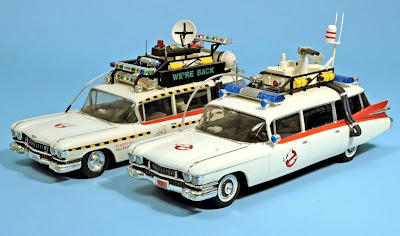 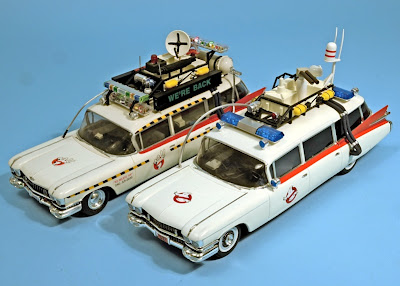 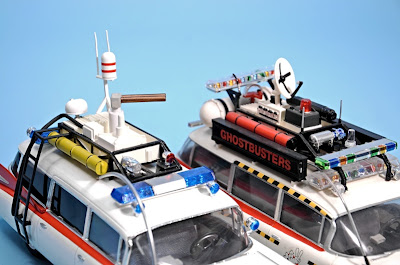 Details
All the bolt-on details - light bars, antennas, tanks, and the all-important ectoplasmic detectors - are different. A conversion is possible if you omit the large tank at the rear, the signs each side, convert the main emergency lamps to blue at the ends and silver in the centre, omit the dish and the third, upper, light bar, you are halfway there. 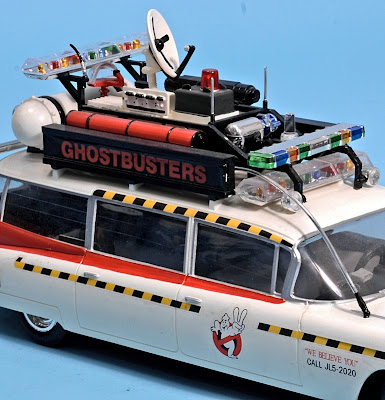 Polar Lights version
But you’d have to scratch-build the ladder and piping on the passenger side, along with the electron gun, weather radar dome, and other smaller details. Even the wheel-embellishers ( aka hub caps) are different. It’s easier if you can find an old Polar Lights version, as the parts will transfer over reasonably easily to the AMT kit. 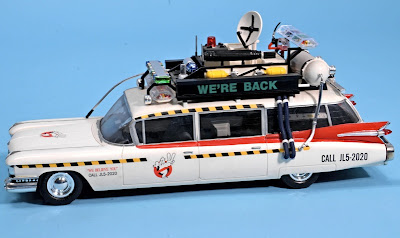 Good to be back
But whichever version you build, it’s good to see the kit back - and don’t forget that the basic Cadillac structure is a great starting point for making other customs - heavens, maybe even a stock ambulance!

Ghostbusters return?
Latest on the long-mooted third Ghostbusters movie is that an all-new cast will start shooting in Summer 2013. If Ghostbusters III finally gets the green light, it’ll be interesting to see if the Ectomobile appears as Ecto-1, 1A, 1B - or even, to match the movie title - Ecto-3.

Thanks to Round-2 for the review kit

Original AMT box for Ecto-1A (below). 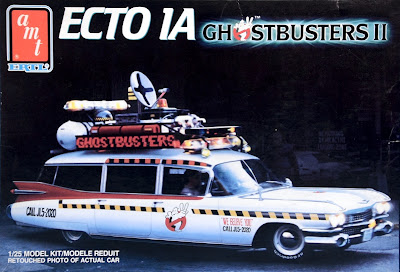 Either kit would be a prime candidate for supplied figures of Dr Peter Venkman and his colleagues, but unfortunately it’s no-go in that department. Instead (below) try this Kenner Mr Stay Puft figure! 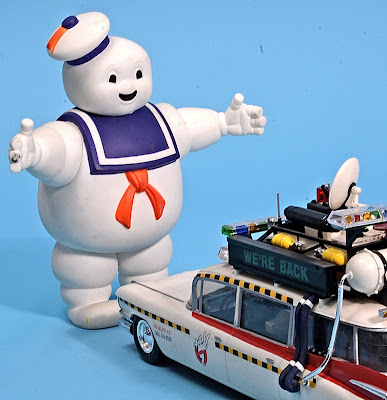 The real thing? Not quite - this is a lookalike (below) I photographed at an auto show near Phoenix, Arizona, in October, 2011. It’s also an earlier model than the Ectomobiles, being a 1956 car, not a 1959. 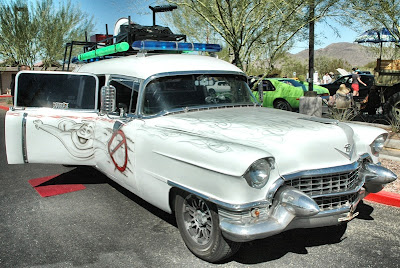 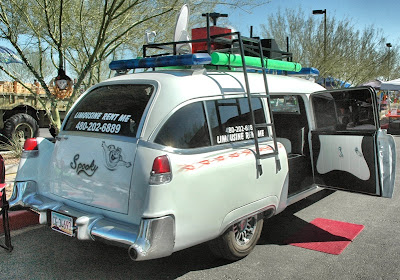 ***SMN note: The two Ghostbusters movies were great fun, and we're looking forward to the next one, provided it's not just a retread! This private 'Spooky' custom is truly excellent - who cares if it's three model years out?!