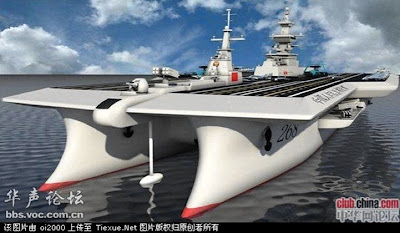 SMN REPORT:
Is this a subject for maritime modellers or aircraft builders? We don’t know the answer (though suspect it’s probably both) but either way, these Chinese Navy illustrations have surfaced on the internet and, concept or not, the cat-carrier is just made for an impressive what-if miniature display piece. 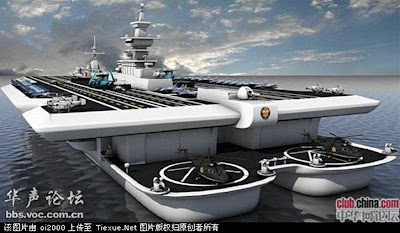 It’s not known if this is a genuine project for the expanding Chinese Navy, but the idea seems to be a quantum leap-and-a-half above anything being conceived elsewhere. 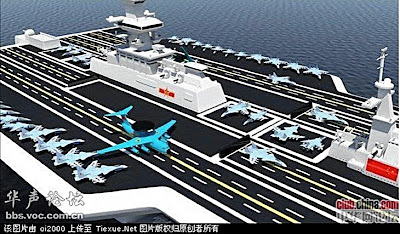 Multi-purpose design
A catamaran design isn’t so crazy, as it offers huge capacity and stability, plus twin flight decks that allow takeoff and landing ops to be carried out at the same time. The space between the hulls would come in useful, offering servicing facilities for submarines and amphibious landing craft. 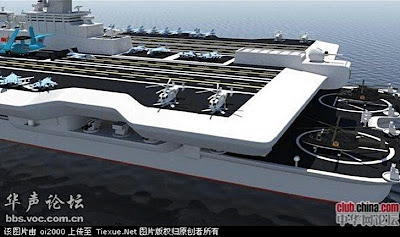 Kriegsmarine cat
Not that the Chinese are unique in thinking about catamaran aircraft carriers, as scale modeller Halsted Morris conceived a what-if World War II German Navy version some time ago. 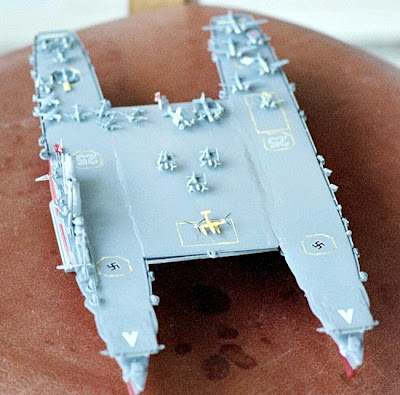 Luftwaffe vs. Kriegsmarine
In Halsted's scenario, the failure to produce a German transatlantic bomber must have frustrated those in the Luftwaffe high command, but their opposite numbers in the Kriegsmarine would have been thinking about long-distance warfare too, and could have come up with an unusual solution.

Revell Graf Zeppelin
Halsted’s concept model is based on a pair of Revell 1:720 scale Graf Zeppelin aircraft carrier kits. The aircraft were upgraded by using items from the Japanese Pit-Road and British White Ensign garage kit companies. They weren’t quite the same scale as the Graf, being 1:700 scale, but in a concept model like this, an exact match doesn’t matter too much.

Swastika afloat
On the flight decks are a wide mixture of types - two He 177A bombers and Bf 110 AWACS, three He 111H and Ar 123 bombers, and four each Ju-88A, Ju 87G, Me 262s. Perhaps the most interesting of the lot is Halsted’s scratch-built Fa 223 twin-rotor helicopter, complete with floats for waterborne ops.

As Halsted puts it: “Who knows, the German could have had their own version of the Doolittle raid on Washington DC.” To which we can add: “Good thing it didn’t happen!”

US cat-carrier plan
Back to the Chinese concept, and we reckon a good alternative model-build could be a US equivalent, using a more modern carrier, such as the Revell USS Enterprise (below) made to 1:720 scale, with 102 parts. The kit comes with 30 aircraft, so two of them would provide a squadron the size of many a small air force. You’d probably need only one superstructure (choose which hull you like, or use the centre-section) but with a length of some 480mm (18.9in) the result could be extremely impressive. And if that’s too large, there is a 1:1200 scale version of the kit available, too. 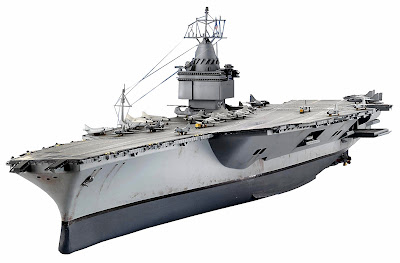 China’s new aircraft designs
Note all the aircraft shown in the Chinese cgi visuals. They include new-design stealth fighters, quad-jet cargo carriers and of course there’s plenty of room for helicopters of all sorts. 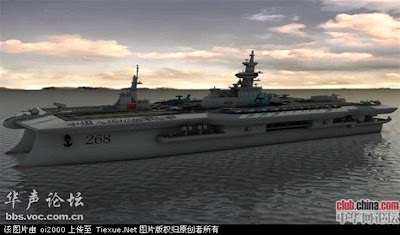 World-wide reach
One sabre-rattling expert reckons that six of these cat-carriers would make a good diplomatic ‘big stick’, if half a dozen were at sea - two in the Pacific, two in the Atlantic, plus one each in the Indian Ocean and the Mediterranean Sea. The Chinese certainly have reasons for having some form of extended naval presence, as they are presently drilling for off-shore oil and gas in many areas.

Summation
An amazing piece of overkill technology for China if such a vessel is ever built. For model makers, the catamaran carrier is a fun idea that would make a terrific display and conversation piece.