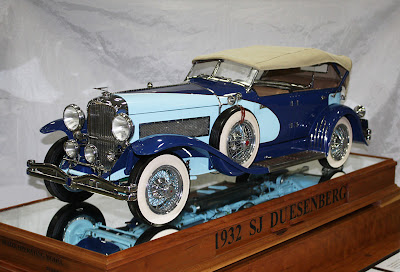 SMN REPORT:
Appearance to the contrary, the picture shows not a real 1932 Duesenberg, but a beautifully constructed 890mm (35in) long working replica, made to 1:6 scale by skilled US craftsman, Louis Chenot.


Lou's 40-year career was spent as a mechanical engineer. In the 1960s he spent seven years restoring a vintage 1930 Cadillac convertible that was on the show circuit for years, but now he prefers to work on smaller projects in the comfort of his home workshop.

Working features
Louis Chenot has spent much of the last decade building this incredibly detailed model, specifically a 1932 SJ Duesenberg LaGrande dual-cowl Phaeton. Not only does it look good, but the engine runs, the lights work, the folding-top functions, and the transmission and driveline are complete. 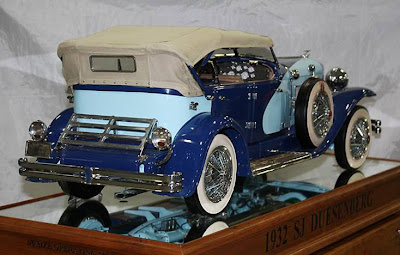 Half-century project
It’s been a long project - Lou started his researches over 50 years ago, with the purchase of a book on the SJ, and through the following years collected many drawings and studied various Duesenbergs while they were being restored, taking photos and recording dimensions, allowing the model to come to be as accurate as possible. 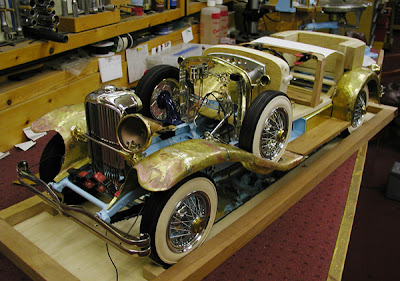 Perfection the aim
The model’s bodywork is all-metal, and here it is (above) in Lou’s workshop, before priming or painting. Accuracy is all in a project like this, and Lou will always remake a part that does not meet his exacting standards - for example, it took nine attempts to get the especially difficult brass radiator just right. 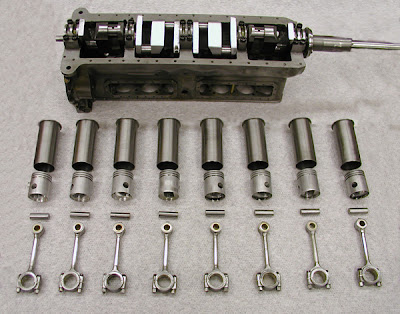 Heavy metal
The engine (below) is shown removed from the model, on its test stand, gearbox in the foreground. Unsurprisingly, the complete car is an extremely hefty item, weighing in at some 27kg (60lb) and is displayed on a specially-made table. 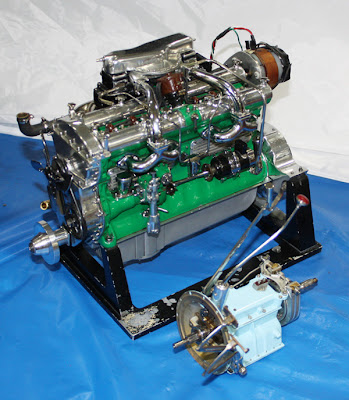 Micro problems
Most working auto models are built at larger scales like 1:3 or 1:4. Working in the smaller 1:6 scale magnifies the problems caused by miniaturization. Remember that to scale, components have 216 less volume than the original. Complicating the process of building a running engine at this size is the fact that fuel molecules and electricity don't scale down, making it difficult to get tiny carburettors and spark plugs to work like the originals.

Custom parts
Inside the straight-eight engine are all the correct parts, custom-machined to scale from steel, cast-iron and aluminium. Block and crankshaft are fully detailed and operational, as are the cast-iron cylinder sleeves, pistons, wrist pins, and assembled connecting rods. 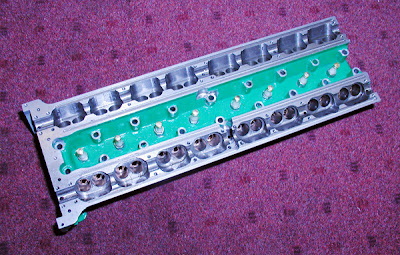 No cheating allowed
Even though there would be no way to tell once it is all assembled, the cylinder-head shows that Lou hasn’t cheated - his 1:6 scale engine has 4 valves per cylinder, just like the real one, while the camshafts have 16 lobes per shaft. 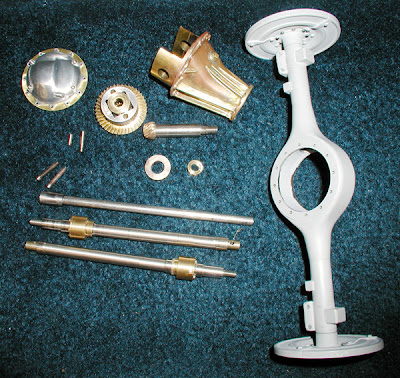 The gears inside the differential will never be seen by anyone, but Lou cut them as hypoid gears like the real thing, rather than taking a short but by machining simpler, bevel gears.

Instruments
The dashboard and interior (below) with the body primed, but not yet with its final paint finish. Note the detailed instruments and engine-turned finish on the dash. 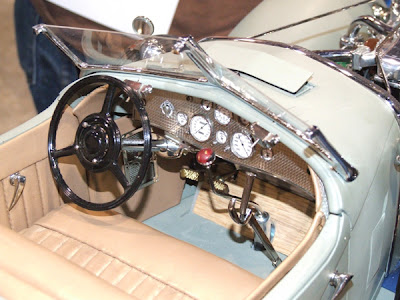 Scissor-action fold
The complex convertible-top mechanism is shown (below) in the lowered position, before the material for the canvas top was installed. 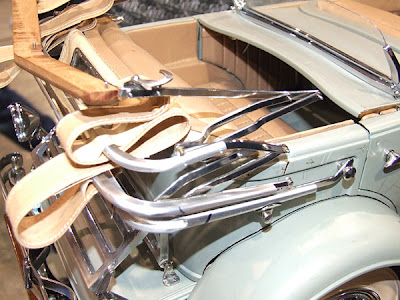 Louis Chenot (left below) and Joe Martin with the completed chassis and engine. 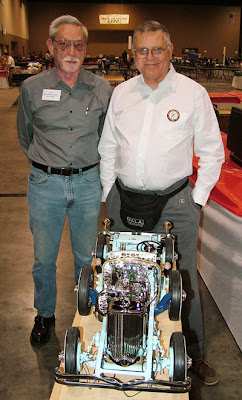 Achievement award
Lou was presented with a special Lifetime Achievement award by the Craftsmanship Museum in 2009. The model was nearing completion but the engine had not yet run. Now that the engine is in working order, and the model complete, Lou has been selected as the foundation's ‘Metalworking Craftsman of the Year.’ 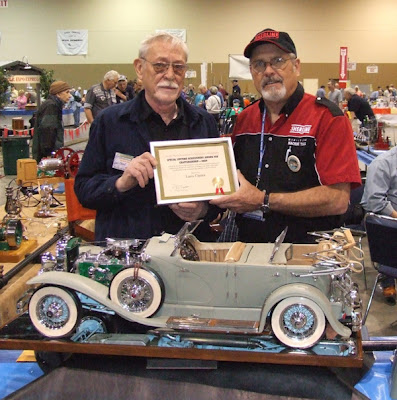 The award includes an engraved medallion and a $2000USD cheque. Lou is the 15th person to receive this coveted annual award. Because it is likely that this could well be the finest running model car ever built in this small a scale, Lou's award this year will be presented as the ‘Craftsman of the Decade.’

Visit the Museum
There’s plenty of droolworthy stuff at the online home of The Joe Martin Foundation Museum and Machine Shop Facility in Carlsbad, California. There are hundreds of projects, including cars, planes, tractors, guns, engines, clocks... you name it, there’s a fantastic craft construction to see.

Thanks for the heads-up from The Motor Museum in Miniature, a travelling display that exhibits at model shows around the English Midlands. Read more about the MMIM here.