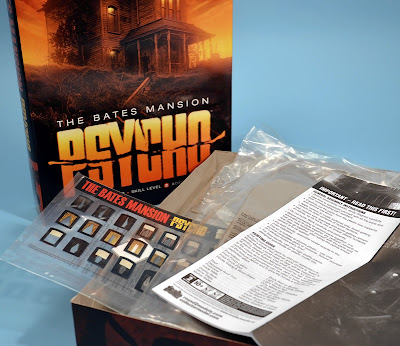 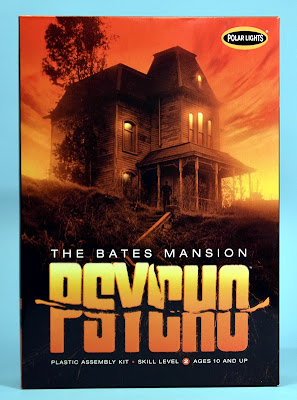 The bottom of the box (below) has additional details, a feature that is now common with many Round-2 kits. 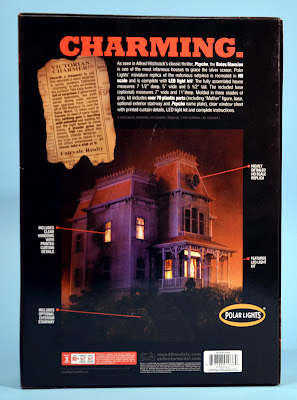 Base included
Overall there are 70 parts to the Polar Lights Bates Mansion kit, and it is designed to sit flat on the supplied base. In this case the structure stands almost 150mm (6in) high when fully assembled. However, if you want to go down the movie-history route and have the building perched on a hill - as it appeared in Psycho - the kit also includes the extended stone stairway leading down to the Bates Motel below the mansion, though in this scenario you’d have to find a suitable motel structure kit. 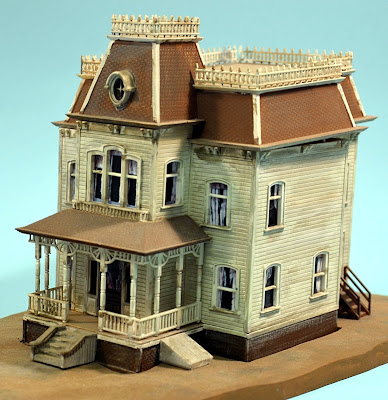 Mansion complete
Note that the base is included, as are the short steps. For the diorama modeller, you also get the full steps that in the movie lead down to the motel. However, the mansion needs raising to accommodate them, in which case the short steps are not used. 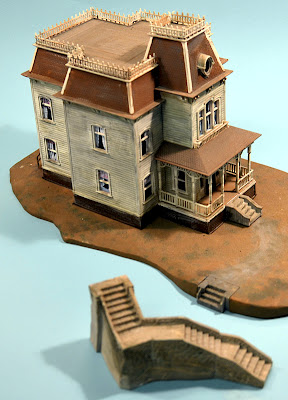 Build a hill
If you want to use this feature, you will have to supply your own hill. Polar Lights instructions give some details for the construction of this ‘Hilltop Option’ with ‘Landscaping Tips’, including carving a suitable hill from expanded polystyrene, also known as Styrofoam. To that, you’ll need to add landscaping elements, such as grass, earth, shrubs and bushes from materials obtainable from any model rail layout suppliers. 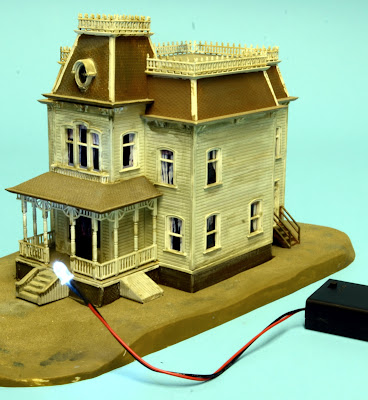 Shades of grey
The Polar Lights Psycho Bates Mansion features finely engraved surface detail, and also a ‘Mother Bates’ scale figure, to place in the second-storey window. The memorable structure comes in several shades of grey and tan plastic, and you also get an LED lighting kit for a taste of night-time horror. The windows and drapes are printed on thin, pre-cut acetate sheet. They aren’t numbered, but some are of a size that fit in only one location, while positions for the rest are optional.

The LED light
It's used in the shot below so you can see Mother Bates at the window. Note that you need to paint the interior black, so the light doesn’t glow through the plastic. It does here slightly, showing as a patch just below the window. 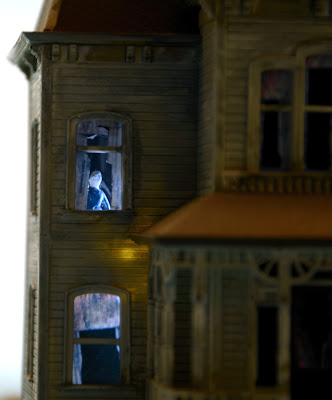 Summation
A well-made kit that has a range of uses - as a display for movie buffs, a background building for rail fans, a diorama accessory for the rest of us. The secret to making its final appearance convincing will be in the finish, as detail and painting could turn it into a show-winner. The LED lighting kit is a debatable inclusion, as it really lights only a small area, though placing it behind ‘Mother Bates’ would seem to be the only logical place for it to go. 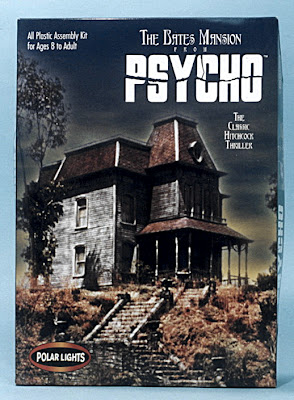 Earlier versions of the kit
The box (above) for the first issue of the Polar Lights Psycho Mansion, in 2004. The third issue of the same basic kit (below) was in 2012, a limited edition in a Collector's Tin - it also included a ‘pseudo newspaper’ with appropriate headlines! 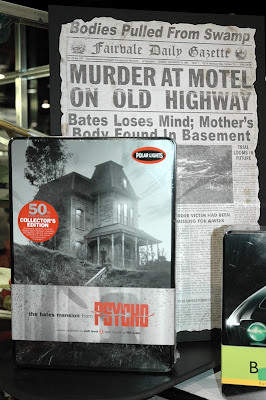 Motel and railroad
An example of the Bates Mansion fitted into a railroad layout, seen a decade ago at the 2003 RCHTA Show in Chicago, now called the iHobby Expo. Note the other building at bottom left, modified from an existing 1:87 H0 kit. This is the Bates Motel that featured in the movie. 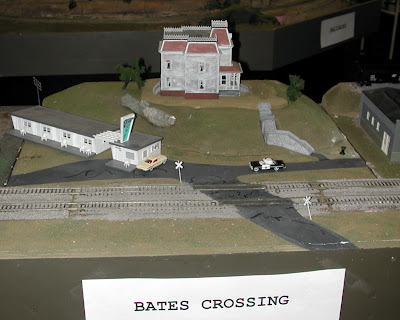 Other horror stuff, including the new kit of 1313 Mockingbird Lane, otherwise known as The Munsters House, by Moebius Models here.

History lesson - earlier versions of the kit
The issue of a Bates Mansion model kit might seem slightly odd, but it does have a precedent that goes back to the model company on which Polar Lights based its name, Aurora. Way back in the 1960s one of Aurora’s oddest kits - and this from a model company renowned for odd kits - was a building in H0 scale. This was because the most popular model rail scale is 1:87 (H0) and many model companies made accessories and buildings. To this end Aurora, along with Revell and various specialist railroad modelling companies, made a wide range of H0 scale buildings, including a Colonial House, Ranch House, Church, Railroad Station - and The Addams Family House, at the time, the subject of a long-running TV series.

The Aurora Addams Family House was originally issued 1964-65, and that was it for many decades. Then the new Polar Lights company came along, and playing on its adaption of the original Aurora name, re-engineered and reissued many classic Aurora kits, including the Addams Family House. Then Polar Lights began to extend its range, and began issuing brand-new kits, and so came up with another classic ‘house of horror’, perhaps the most infamous in movie history, the Bates Mansion.

To match the existing Addams Family House, the Bates Mansion was also made in 1:87 scale, and to date has been issued three times. The parts have been identical each time, just the packaging changed. The first box-art used a colour still from the filming of the movie, making it useful for reference. This kit was issued in 2004. In 2010 the reformed Polar Lights, by now part of Round 2, reissued the kit with another new box design, this time with a colorized black and white image.

In 2012 a third issue was released to celebrate (if that is the right word) the 50th anniversary of the movie premiere. This was a limited edition in a Collector Tin, a method Round 2 has used for many of its kits. This issue used the image from the previous kit, but in black and white, to match the movie. It also contained the LED module, and a reproduction of a supposed local newspaper with suitably grisly headlines.

The movie and the ‘reel’ mansion
Alfred Hitchcock has been in recent headlines anyway. First came the BBC TV production, The Girl, that centred around the filming of the movie The Birds with Toby Jones as Hitchcock, and his relationship with Tippi Hedren, played by Sienna Miller. Then came the more recent theatrical release, Hitchcock, starring Anthony Hopkins and Helen Mirren, this time concentrating on the making of Psycho itself, a plot based on a story by Robert Bloch. The Bates Mansion took centre stage and has become the iconic image for anything involving gothic horror. Intriguingly, the original design for the house was apparently based on an Edward Hopper painting House by the Railroad, a building in Haverstraw, New York, that wasn’t known to have had any ‘gothic horror’ connection at all - it just looked the part!

The ‘reel’ house used for filming was built on the back lot of Universal Studios. It was a true piece of scenery, as originally only two walls were built, held up with scaffolding and based on a partial existing structure, moved from one of Universal back-lot buildings on ‘Colonial Street’ to a new location. It was only used for the exterior shots, the interior scenes were made on a film stage. It later appeared in the Psycho sequels, and many other movies and TV series including Larado, Alias Smith and Jones and The Six Million Dollar Man. Where necessary, more walls were built, and it has been re-located twice to different areas of the back lot. More details here.

Psycho was shot in black and white, the story being that the idea of blood from the stabbing was thought to be too off-putting in colour! In reality true Hitchcock fashion meant that most was ‘suggested’ anyway. Three sequels were made, though generally all thought to be somewhat unnecessarily. However these were shot in colour, so if you want more reference for the house, finding the relevant DVDs could be useful. The oddest movie though has to be the 1988 remake, which used different actors, but was done shot-by-shot, to match the original exactly. It even used the original Bernard Hermann soundtrack, though exactly why it was made this way is something of a mystery.

And that of course isn’t all with ‘small scale gothic houses of horror’ as we now have a third, this time from Moebius Models and it is of course the companion to the Addams Family, the long-awaited 1313 Mockingbird Lane, the family residence of those ‘just plain folks’, the Munsters. But more of them another time…