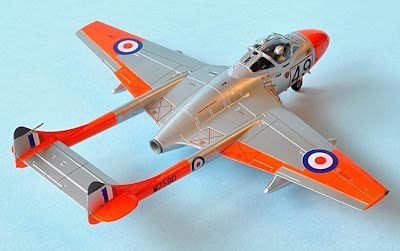 SMN Report:
The 1:72 scale de Havilland DH100 Vampire T11 from Airfix is now widely available. A look inside the box reveals that the new-tool kit is a good one. 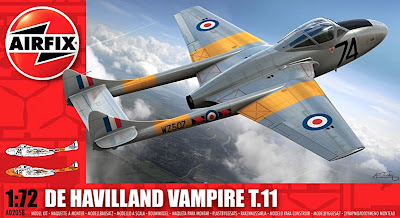 What’s on offer with this kit? How about neatly engraved panel lines, some decent cockpit detail including an instrument panel with accurately printed instruments. On the build front, it’s important to note that the Vampire T11 is a confirmed tail-sitter, so to display the aircraft balanced comfortably on its landing gear, you need to weight up the nosecone, though this is detailed in the instructions. When assembled, the 55-part Airfix Vampire T11 has a length of 146mm (5.7in) and wingspan of 161mm (6.3in). 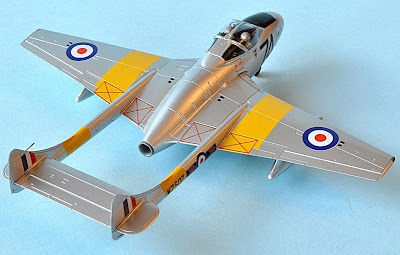 Wide-view canopy
Being a side-by-side two-seater, the cockpit canopy is relatively large, and it’s good to see that Airfix designers are putting in the extra mile where 1:72 scale components are concerned. An example is in the neatly moulded and very clear three-section canopy, which includes the front windshield, opening mid-section, and rear glass.

Decals and markings
Airfix has supplied two optional marking schemes. First up is for the Vampire preservation team machine, based at North Weald, 2012. Also supplied are markings for No 5 Flying Training school, based at Oakington, Cambridgeshire, more than half a century ago, in 1962.

Day-glo days
The fluorescent red panels remind me of times I spent as an RAF Air Cadet, when, on one occasion I was able to score several sheets of self-adhesive day-glo sheet, to be applied later on many things, including a motorcycle top box!

About the Vampire
The single-engine de Havilland DH 100 Vampire was a British jet fighter, first flown in 1943, at the height of World War II. Following on from the successful Gloster Meteor twinjet, the Vampire became the second RAF jet fighter to enter service.

Big success
The Vampire was developed too late to go into combat during World War II, but remained in front-line RAF service until 1953, and continued as a trainer until 1966 - 731 of these were built. The Vampire was a big export success, and served with many air forces worldwide. Nearly 3300 Vampires of all types were built, the design also forming the basis for the Venom fighter-bomber and the naval Sea Vampire. 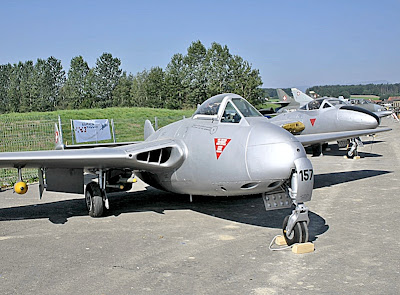 The pictures
The flight lineup (above) shows a single-seat Vampire FB5 in the foreground, with a comparatively portly T11 behind it. Picture courtesy Arnaud Gaillard.

De Havilland Vampire T11 (below) at Point Cook, Australia, was pictured just before taking off for a flying display at the 2010 Royal Australian Air Force (RAAF) Museum Air Pageant. The aircraft had previously flown on operational duties in the Rhodesia/Zimbabwe Air Force, being shipped to Australia in December, 1988. Picture courtesy Phil Vabre. 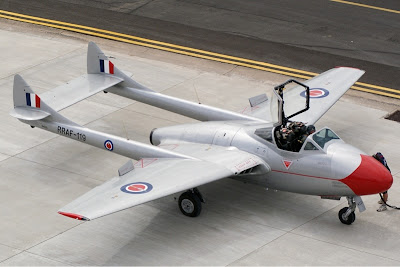