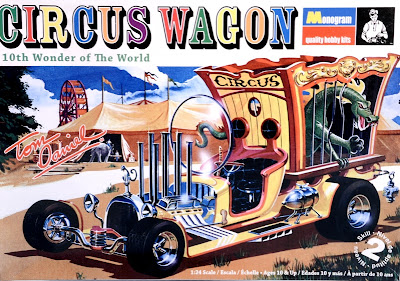 The Tom Daniel ‘Dragon Wagon’ from 1970 has been updated with a mould re-tool, a new name, and a new box. For 1:24 scale custom fans, it’s one of many similar kits on the launch pad from Revell-Monogram, even if this one is now called a ‘Circus Wagon.’ 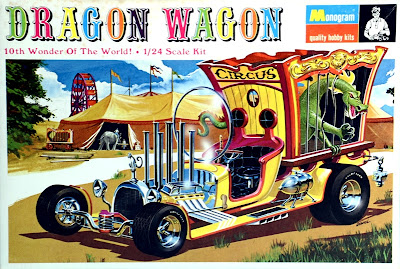 According to the kit’s designer, famed US auto customizer, Tom Daniel, “I was on a roll with these hot-rodded work trucks when I did the Dragon Wagon. Of course, the ‘Dragon’ was a metaphor for ‘Draggin’ or drag racing. So I put a baby dragon in a circus vehicle. I dressed it up with calliope injection stacks, a monkey for the hood ornament and tiger tail for the shifter. Overall it turned out pretty neat!” 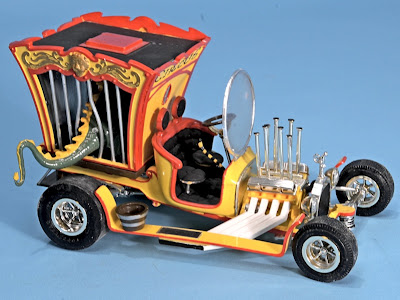 Tom’s dream
There’s more from Tom in the kit instructions, “It all came… in a dream… being pursued by this fire-breathing dragon…” which he promptly captured (as you do in dreams) and built the wagon so he could, “…take it on circus tours, as the 10th Wonder of the World.” So the vehicle has a circus theme, with a caged dragon at the rear - though note that the bars are already bent. 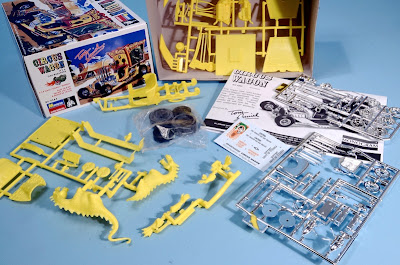 Mods for the new kit
Because the mould has been retooled, a few modifications have been made along the way. Most noticeable, though it doesn’t change the overall look, is that the dragon now has four separate legs and two body halves, whereas the original made do with just two components for the whole thing. 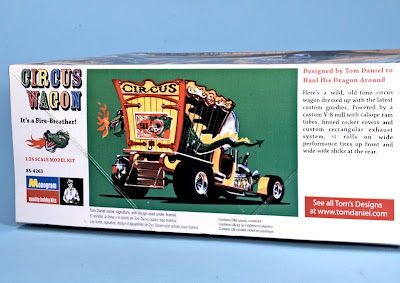 Parts list
The kit has 76 parts, mostly moulded in yellow, with two chrome-plated runners for the bright shiny bits, and a clear, circular windshield. There are also four vinyl tyres - two front performance designs and a pair of wide rear slicks. When assembled, the 1:24 scale machine measures 160mm (6.3in) long. 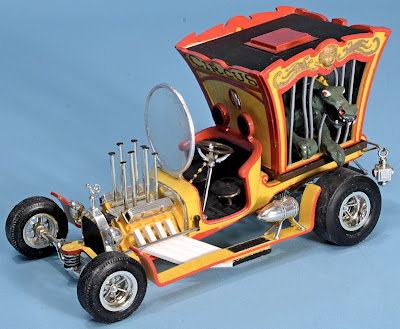 Summation
An interesting kit from 1970, and it’s such good news that Tom Daniel’s designs are seeing the light of day again. I do wonder though, why he called it the ‘10th Wonder of the World.’ Given that there are usually only seven wonders, what happened to numbers eight and nine? 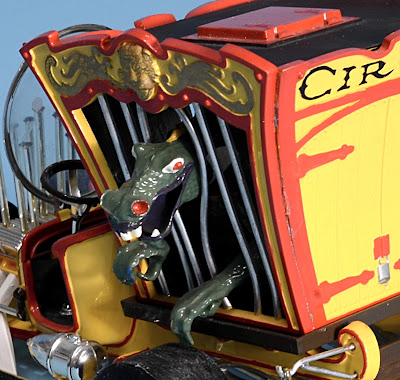