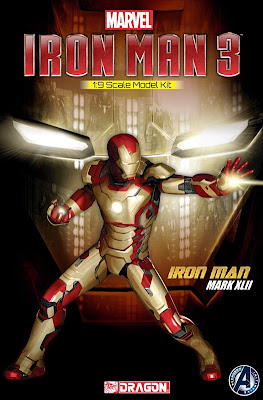 
Both kits are due out in May 2013, and represent two figures from the Iron Man 3 movie: the red-and-gold Mark XLII (Mk 42) and the black-and-steel War Machine version. 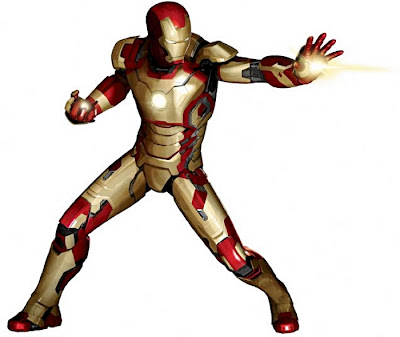 There are not too many details available yet, so we’ll stick to Dragon’s basic information about the 1:9 scale kits’ special features:

* …faithfully reproduced in model kit form, allowing collectors to assemble their figures individually.
* …end product of exhaustive CAD design, and the heroes are made with an eye to perfect accuracy and authenticity.
* …separated into as few parts as possible to ensure they're extremely easy to assemble. 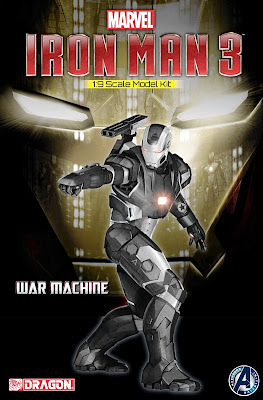 Too simple?
For those of us that like at least 100 parts (and preferably more!) it sounds like Dragon has come up with what could be two easy-but-boring kits. But maybe not - if assembly is speedy and relatively simple, then that leaves more time to devote to super-detailing, weathering, even a decent diorama setting. So the final result will probably balance out, timewise.

Summation
Great pair of kits for superhero and sci-fi fans alike. Yes please, and the kits fit with other Dragon superhero figures nicely. Even so, at one-third smaller than standard 1:6 scale, these Iron Men might just look a little feeble in a lineup with the bigger scale. Answer: display Dragon superheroes on their own and they'll look excellent. 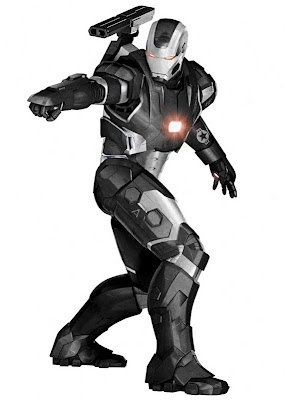 About DML
DML was established in 1987 to manufacture plastic kits, with world-wide exports as a prime aim. Since its founding, DML has released more than 1000 items, and its high-quality products have won many awards from magazines and model societies around the globe.

DML today
Currently, DML's business scope includes plastic models, action figures and diecast collectibles, as well as resin, PVC, vinyl, and radio-control. According to Dragon, the company, “…sets the industry standard in many areas, and is a market leader in many of its lines. Its fine products are much sought after by collectors on ebay and suchlike, and truly, DML has set an example for other manufacturers to emulate.” So now you know.

Dragon superheroes and other kits here.