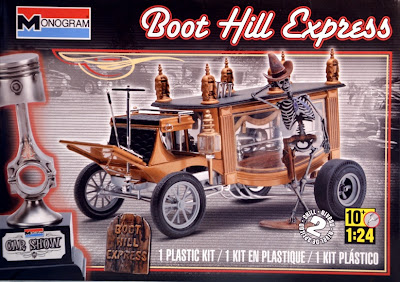 Mat Irvine: A classic custom car kit from the days of hippies and flower power, now a 1:24 scale reissue from Monogram.


Boot Hill Express was created by Ray Farhner, a US custom car designer and builder who ran the Farhner Custom Shop in Independence, Missouri, until his death in 2005. He built a number of custom cars for the show circuit, but the best known has to be the Boot Hill Express, and now Monogram has reissued the kit, first produced in 1967. Box-art for this (below) showed the real 'wild hearse' vehicle in a Wild West town setting, with designer Ray Farhner dressed in suitably western gear. 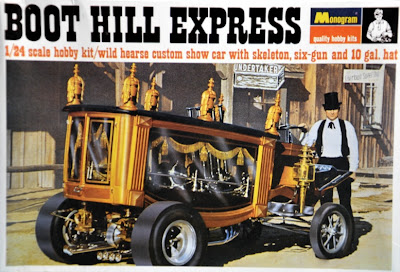 The real thing was based around a horse-drawn hearse of 1850 vintage, built by Cunningham of New York. But Ray ditched the original equine motive power, replacing it with a 426cu in (7 litres) Chrysler Hemi V8 engine with Hilborn fuel-injection, generating 450hp, running through a Chrysler A-727 TorqueFlite three-speed automatic transmission, all controlled by push-buttons. 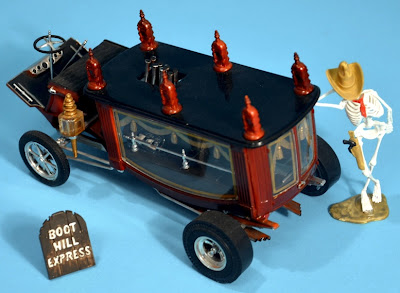 The mechanical layout included a tubular straight front axle, steering from a VW Beetle, and suspension that used a transverse-leaf spring. At the driven rear end, there was a differential and axle from a 1948 Ford, complete with drum brakes. 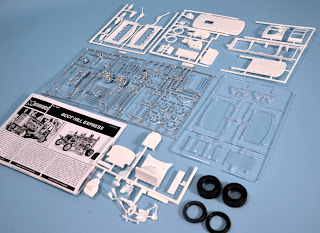 All this is faithfully reproduced in the Monogram kit, which consists of 93 parts in white, chromed, and clear plastic, plus skinny tyres for the front, and drag slicks for the rear. Previous issues have been moulded in a variety of shades, including yellow, but white is the best colour for any model kit if you intend to paint it. 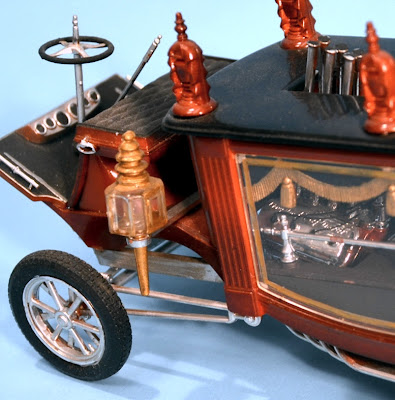 To complete the theme, Monogram supplies a 'wood tombstone style nameplate (below) plus a skeleton figure wearing a 10 gallon hat, and toting a six-gun in a holster. 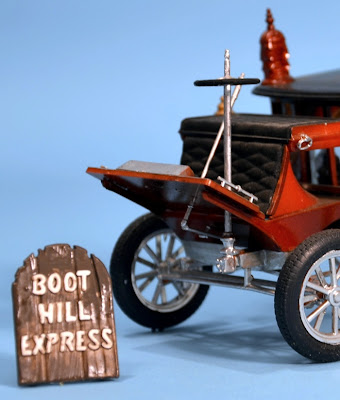 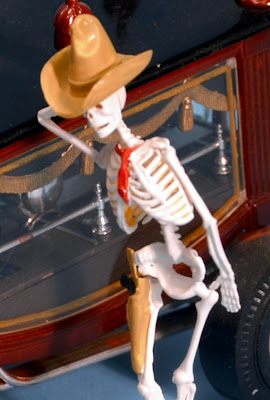 Supplying a skeleton figure was a very ‘sixties’ thing with American custom car kits. There are over half a dozen examples of this, mostly from Monogram, though MPC and Pyro also got into the act. 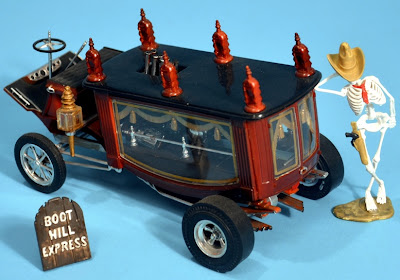 The Boot Hill Express is a natural to place in a suitable setting. Here I built a simple wood base, planted with cacti from the Woodlands Scenics ‘Scene-A-Rama’ and Pegasus Hobbies sets, finished off with a mixture of fine sand, rocks and stones. The latter are also from Woodland Scenics, and marketed principally for use as ballast for model railroad tracks. But of course they are adaptable for use anywhere you need such scenic additions. 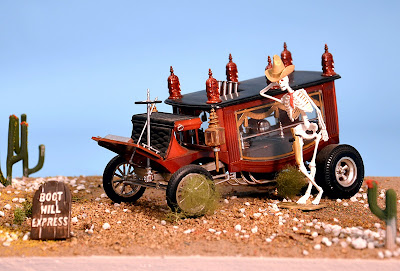 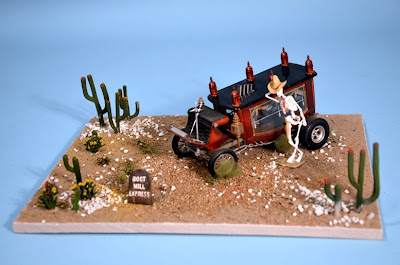 Note: Fahrner's custom vehicle is known variously as ‘Boot Hill Express’ and ‘Boothill Express’. I have used it as stated on the kit box, but some sources - for example, the website Kustomrama, regarded as the wiki of custom cars - uses the latter.