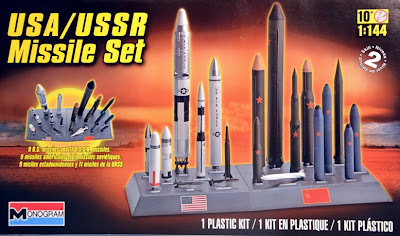 Mat Irvine: A newly-reissued Cold War missile set from Monogram, featuring 20 missiles from the opposing forces, all to the same 1:144 scale.


This latest reissue kit dates from 1985, a time when, although the Cold War was approaching its end, the USA and USSR still had vast stockpiles of missiles. Reflecting this, the kit features nine missiles from the USA and 11 from the USSR.

This is the third missile set Monogram has made over the years. The first, the US Missile Arsenal, was issued as long ago as 1958. This was modified as the US Space Missiles set in 1969, itself reissued in Monogram’s Heritage Edition in 1983. Both sets were in the larger, though non-standard, 1:128 scale. 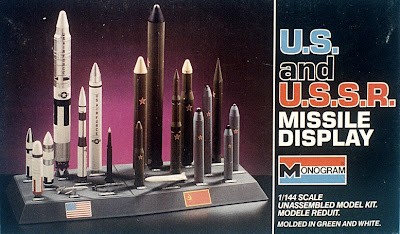 The 1985 set (above) on which this latest reissue is based had no tooling connections with the earlier sets, and was titled US and USSR Missile Display. It was reissued in SSP (Selected Subjects Program) Phase 4, in 1993. Now in 2013, this latest reissue has modified box-art and an adjusted name, the ‘US’ becoming ‘USA’. 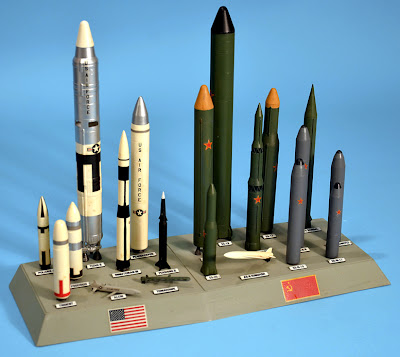 It’s an impressive kit to build and display, though not so much if you like lots of components. It has just 45 parts in all, about the bare minimum that you would need to build all those missiles, as well as a display base and decal sheet. The base measures 323mm (12.75in) across, divided into USA at left, USSR on the right. 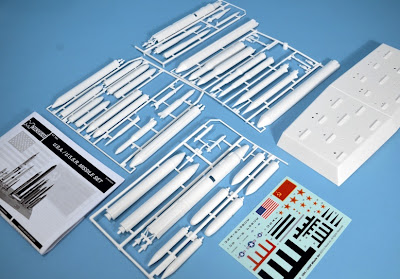 For the USA (below) you get the land-based Titan II, Minuteman III, Peacemaker and Pershing II. Then there are the sea-launched Polaris A3, Poseidon and Trident. A pair of cruise missiles are included, the ALCM (Air Launched Cruise Missile) and sea-launched Tomahawk. 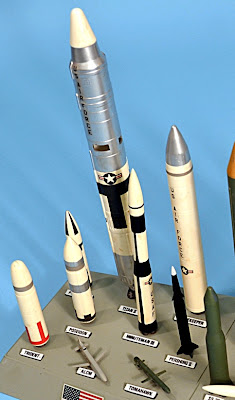 The Soviet contributions to the set (below) are listed by their US Department of Defense designations, consisting of ‘SS’ plus a NATO codename. These are the SS-18 Satan, SS-4 Sandal, SS-13 Savage, SS-17 Spanker, SS-19 Stiletto and SS-20 Saber. Sea-launched missiles are the SS-N-8 Sawfly, SS-N-17 Snipe, SS-N-18 Stingray, plus the air-launched AS-6 Kingfish. 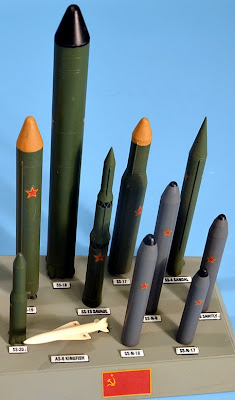 The construction of each missile model is by its very nature fairly simple, and each, bar one, consists of just two halves. This applies even to the Titan II which could have had separate engines, though an exception is the SS-18 which has four separate parts for the sustainer engines. However, each missile can be individualised with varying paint schemes and the odd decal. The colouring ends up with US missiles being mostly white, Soviet missiles mainly green or grey. There is one vice-versa however - the Soviet Kingfish can be finished in white, the two American cruise missiles painted grey.

For the record, most of the Soviet missiles are surface-to-surface types, so have the logical ‘SS’ designation. The SS-N-X series are sea-launched equivalents, while the AS-6 Kingfish is air-to-surface.

The SS-4 Sandal has the Soviet R-12 title, and was a development from the SS-3 Shyster, a missile not that far removed from the German V-2 rocket, of which both the Soviets and Americans got large numbers as spoils of war, after the defeat of Germany in 1945.

The SS-13 Savage (Soviet RT-2) is comparable to the US Minuteman, though with an open-truss inter-stage section, an arrangement also seen in the Vostok/Soyuz A-type space launcher.

Summation
A particularly interesting 1:144 scale Monogram reissue - the Cold War is now history, and the missiles are part of that. The assembled model looks extremely impressive on the display shelf, and while we could ask for more detail, the nuclear aggression represented here makes for fascinating viewing.
Email ThisBlogThis!Share to TwitterShare to FacebookShare to Pinterest
Labels: Cold War, missile set
Newer Post Older Post Home