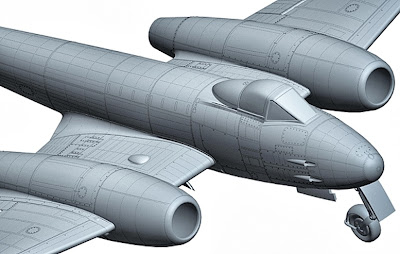 
The Meteor was a single-seater, so even at 1:32 scale, the model is not going to have the same arms-length wow-factor as HKM’s heavy bomber kits, the Flying Fortress and Lancaster. 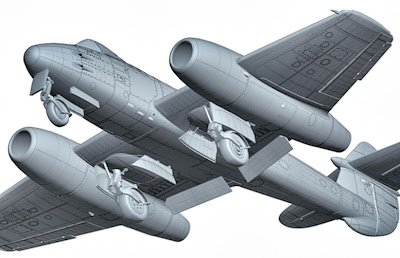 But this ‘Meat-box’ jet isn’t at all tiny, having a wingspan of 355mm (14in) and fuselage length of 394mm (15.5in). As with the HKM Avro Lancaster, we don’t yet have build-up pix, but the cgi images are mouthwatering enough, particularly for anyone interested in either World War II or first-generation combat jets. 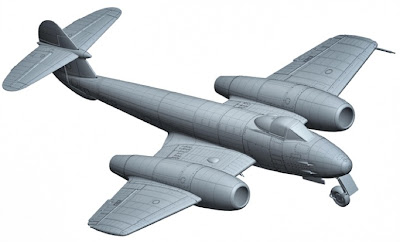 About the Meteor
The Meteor prototype first flew on March 5, 1943; the following summer, production machines were in service, flying against German V-1 flying bombs attacking London.

The Meteor (F Mk3 shown below) proved to be an effective machine, with a total of 3947 being built for the RAF and 17 other air forces, including those of Australia, Belgium and Israel. 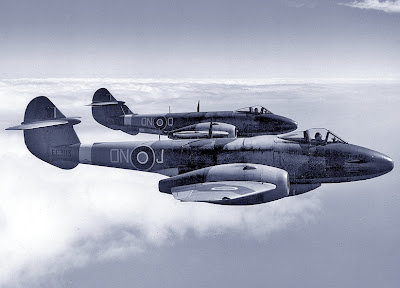 Despite its simple design, the Meteor was a record-breaker, and in 1945 Group Captain HJ Wilson took the first official jet aircraft speed speed record, at 975km/h (606mph).

The last RAF Meteor was retired from duty in the 1980s. However, there are plenty of survivors on show in air museums, and five remain in airworthy condition.

Summation
Looks like another interesting HKM kit. There is no release date yet, but expect the HKM Gloster Meteor to be available soon.