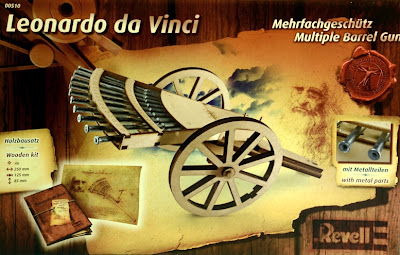 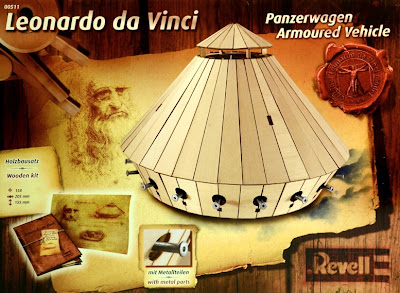 These kits reflect Leonardo’s fascination with the ‘machineries of war’ as they are the Multiple Barrel Gun or ‘Mehrfachgeschutz’  (‘Multiple Protection’ in German, according to Google Translate) and what is almost certainly one of Leonardo’s most famous and most recognizable designs, a circular tank-like vehicle that runs on wheels. On the box-top Revell calls it an Armoured Vehicle (‘Panzerwagen’). 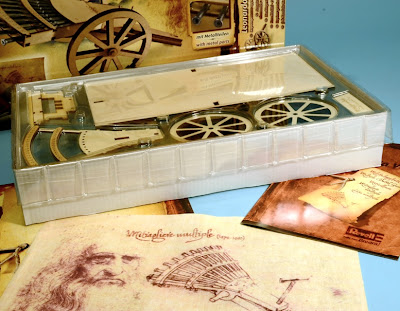 Multi-material kits
As with other Revell Leonardo kits, and unlike those currently available from other model companies, ‘contemporary materials’ are used, not plastic. These are mostly in wood, though both kits also employ cast-metal parts for their gun barrels. 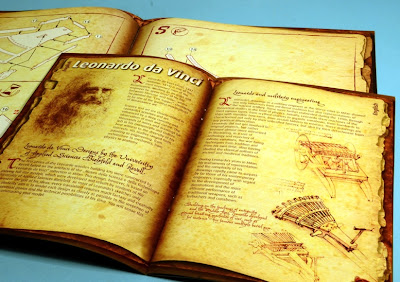 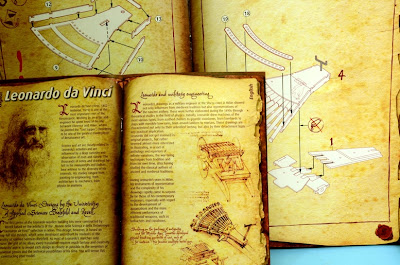 Metal guns
The 1:16 scale Multiple Barrel Gun (above) is the simpler of the two models. It has 34 laser-cut wooden parts, (29 for the gun, five for the base), and ten metal gun barrels, plus one metal ‘adjusting screw’. All these kits are scaled, although some seem more speculative than others! 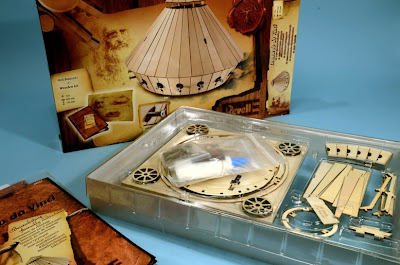 Complex kit
The 1:24 scale circular Leonardo tank (above) is one of the most complex kits in the whole Revell series, with 125 components in laser-cut wood, plus 18 cast-metal gun barrels. The superstructure can be left loose if you wish to view the interior, and the four drive-wheels rotate if you want to run it along the ground. Incidentally, there is no engine in there - had it been built, Leonardo's design would have moved under muscle power alone, with two crewmen turning crankshaft-linked handles.

Comparisons
Intriguingly, the kit’s 1:24 scale means that you immediately have a size comparison with other 1:24/25 scale vehicles. The most common military scale is 1:35, but Tamiya, for example, makes a few tanks in 1:25, plus there are various 1:24 scale Jeeps and other military soft-skinned vehicles. See the recent SMN article on Italeri releases. 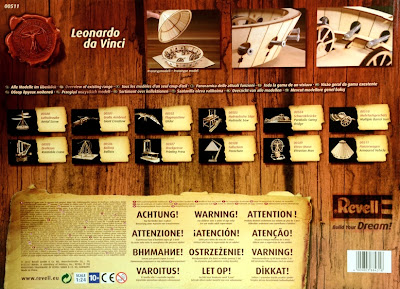 Extras included
As with previous Revell Leonardo kits, you get full-colour instructions, an explanatory booklet, and a reproduction of Leonardo’s original design on cloth. It’s ‘suitable for framing’ according to Revell. 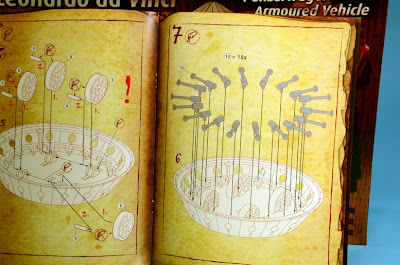 End of the range?
With this pair, Revell’s Leonardo series appears to be complete, a dozen kits in all. Still, there may be more sometime in the future, for Leonardo’s ideas leave no shortage of design inspiration.

Summation
A fine pair of semi-educational kits. The tank is perhaps the most interesting for its production to a common scale.