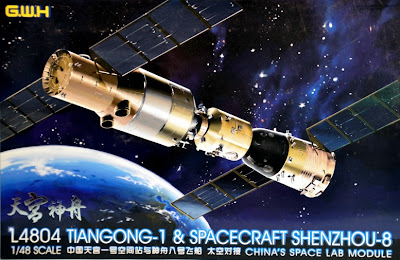 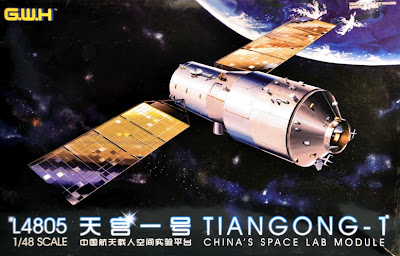 You have a choice of kits: the Tiangong alone (above), or supplied together with the Shenzhou as a double-kit (top). Exactly why the company has done this is a bit of a mystery, but if you just want to build a space station, the single kit is for you.

Components are moulded in mid-grey plastic and of the fine quality now expected from a Chinese model company, something that perhaps could not be said of some early model kits. 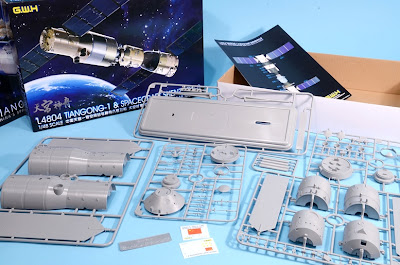 The bulk of the Tiangong kit consists of the main sections, simply two halves with end-bulkheads, and smaller detail parts, making it the simpler of the two. Shenzhou’s design is based loosely on the three-module Russian Soyuz, so there's a lot more to the kit. The solar panels are slightly too thick, but that’s a penalty you have to live with, when trying to represent a full-size structure only a few millimetres thick. 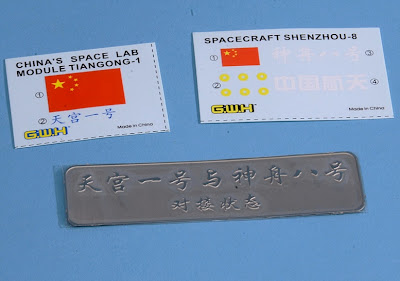 Decals (above) are provided, and there is also a rectangular metallized plaque written in Chinese for the base. 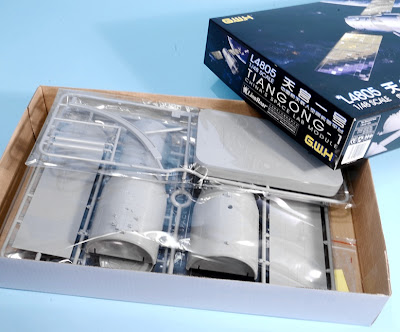 Instructions (below) are simple but adequate, with colour images showing the craft in orbit, and a plan view to indicate the colour scheme. Paint numbers are given for Tamiya colours and GSICEROS (sic), actually GSI Creos, the parent company of Gunze Sangyo. But either range can be duplicated using the modelling world’s other main paint producers: Testors, Humbrol, or Revell-Germany. 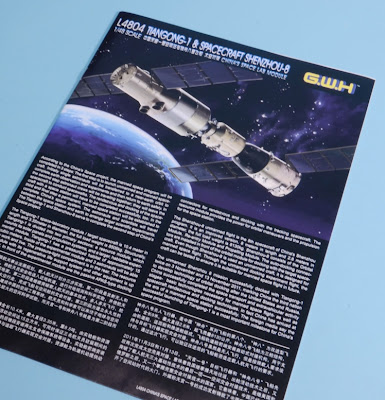 These kits have been known about for some time, but availability has eased only recently. In the UK, they are imported into the UK by Creative Models, review kits supplied by Paul Fitzmaurice of the model paint and accessory supplier little-cars.

New name
A word here about the company name, as there has been some confusion. The overall company that makes these kits is the Shanghai Lion Roar Art Model Company Ltd., which started in 1996. Initially all models were sold under the Lion Roar name, but more recently, the subsidiary Great Wall Hobby (GWH) was introduced. This is now used for all complete kits, leaving Lion Roar for accessories, including conversion kits and a wide range of photo-etch parts for other model companies.

About the real spacecraft
Tiangong-1 was launched in September 2011 on a Long March rocket. Shenzhou-8 was launched at the end of October 2011, and docked with Tiangong-1 on November 3. It then undocked and redocked on November 13. Shenzhou-8 was uncrewed for this mission, which was designed for rendezvous practise. The first crewed flight was Shenzhou-9 in June 2012, the mission that also included Liu Yang, the first Chinese female taikonaut (astronaut). The third and final scheduled mission to Tiangong-1 is due in mid-2013. 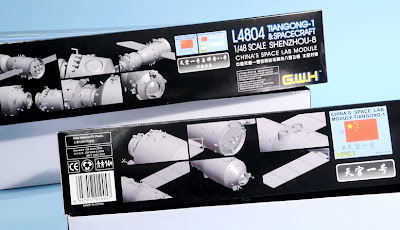 Summation
Basically, a fine pair of kits. I haven’t built them yet, but will do so at some point, so ‘watch this space’ for comments. However, for photographs of assembled models in realistic settings, visit expert space modeller Keith McNeill’s website here. He has plenty of other spacecraft on show, so scroll down to find the Chinese pair.