Mat Irvine: Here’s a blast from the past with a reissue of the first Alien kit ever issued, a 1:8 scale science-fiction monster from MPC, now produced by Round 2 LLC. Over the years there have been a number of model kits from Alien and its sequels, but this Round 2 reissue is based on the very first Alien kit, made by MPC in 1979, initially when the company was still part of General Mills. Now Round 2 LLC, current owner of MPC, has reissued the kit almost as it was, more than 30 years ago. You get a near-identical box (old one, left above) complete with classic MPC logo, containing a set of parts moulded in the original colours - 22 of them in black styrene, with a further, transparent piece for the head carapace. 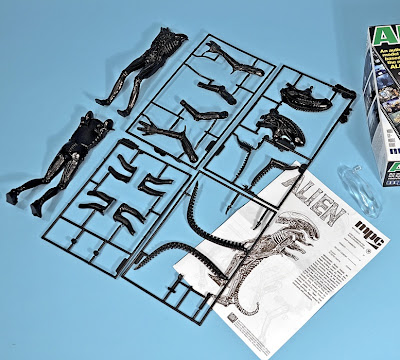 It’s not a difficult kit to assemble, as you can put those 23 parts together in just 15 minutes or so. But, as with any model kit, the final appearance really depends on the time and effort you put into the painting and finishing. 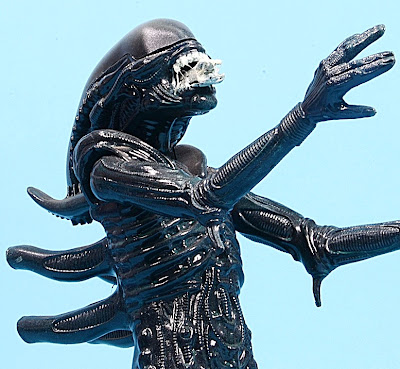 Yes, this Alien is moulded in black plastic, but you can do a lot to add realism and bring out the detail by carefully applying various washes, and dry-brushing sections. I used a translucent greenish tint for the carapace, and to add a touch of slavering nastiness, supplied the inner teeth with some dripping ‘drool.’ 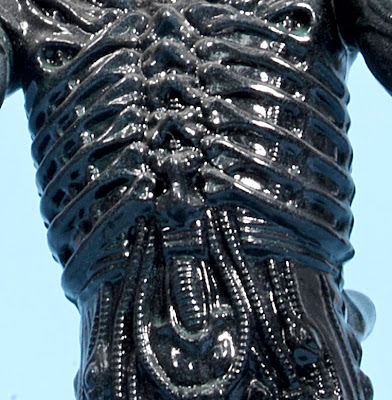 Perhaps an odd omission for this sort of kit is the base, or rather, the lack of it. I made the base you see in these pictures, the basis for which was a section of fine steel mesh, with extra parts supplied from the bits and pieces box. 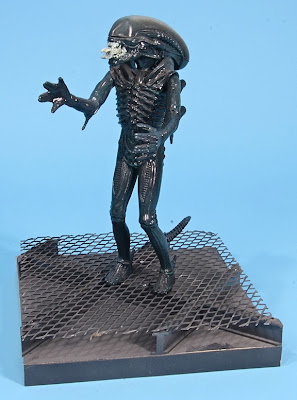 If you’re short of suitable construction materials to make such a base, you could try EMA Model Supplies, an outfit that markets all sort of useful stuff, from styrene shapes to scenic materials. Here I used EMA plastic girders to support the mesh spacecraft flooring, these items supported by a wooden base 203mm (8in) square. 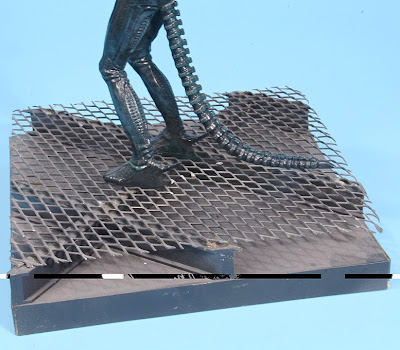 I sprayed the whole base satin-grey, but the choice of colour is up to you - silver-aluminium to simulate bare metal would be just as suitable, as would matt black. The result already looks fairly well-used, but you could go for a ‘battered spaceship’ look by denting the mesh, weathering all over, and perhaps adding some splatter effects. 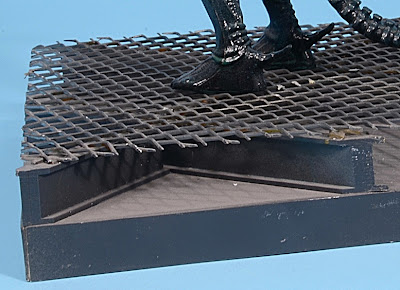 A neat feature of the MPC Alien is the selection of articulated parts - assemble the kit with care and you’ll be rewarded by arms and neck that pivot, and secondary jaws able to slide in and out. These are perhaps more fun toy than scale model, but are worth having when you come to show off your finished Alien to the outside world. 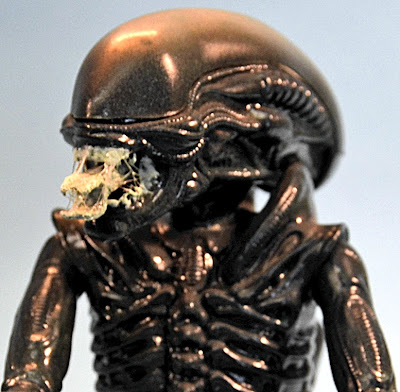 It’s worth pointing out that the 228mm (9in) height of the assembled model makes this Alien little more than a stunted teenager, as reference sources indicate a full-grown critter may grow to a super-scary 2.4m (8ft) or more, resulting in a 1:8 scale model that ought to stand some 300mm (12in) tall. 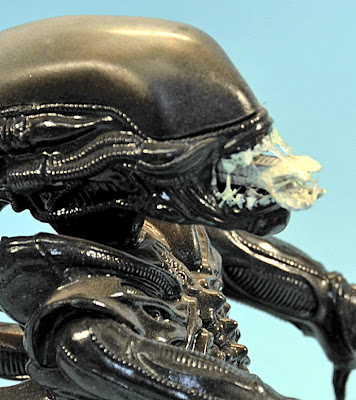 As for the nightmarish design of the Alien itself, this dark vision came from the Swiss surrealist, HR Giger. It’s a look that has lasted well, even when you know that the creature is only a tall, thin human actor, wearing a realistic suit. Whatever, Alien the movie came out tops.

Here's a piece of history, a pic taken at the 1980 London Toy Fair of the original Alien kit display. 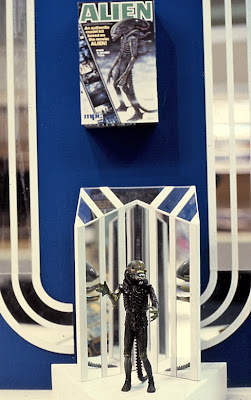 A useful extra is the printed box base, which includes movie background details. For app-equipped smartphone owners, there's also a barcode pattern which takes you direct to Round 2's website. 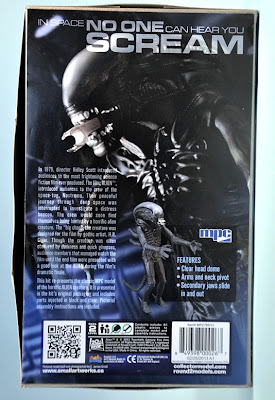 Summation
Don’t let the scale comment put you off, as the kit looks terrific when built. It’s good to see the original Alien kit reissued after all this time, and if you put in the detail and finishing work, it should compare well with current offerings. 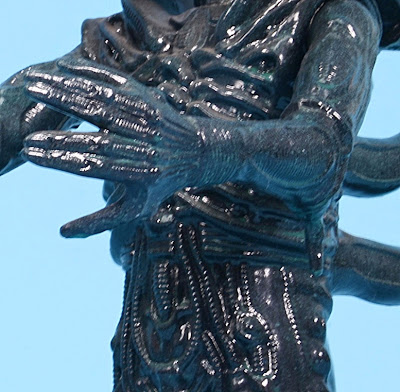 SMN note: Other Alien kits include the upcoming Kaiyodo Revoltech range, which should be released in a couple of months.
Email ThisBlogThis!Share to TwitterShare to FacebookShare to Pinterest
Labels: Alien, EMA, MPC
Newer Post Older Post Home