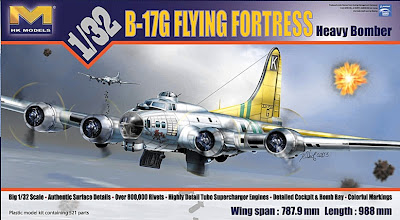 David Jefferis: The long-awaited 1:32 scale Boeing B-17G from Hong Kong Models is at last nearly ready, with orders being taken for July deliveries.


The Hong Kong Models (HKM) B-17G features one of the most famous aircraft of World War II, and the 1:32 scale makes it a massive model. Fuselage length is 788mm (31in) while the wingspan measures 988mm (38.9in) - nearly a metre, or more than a yard, depending how you like to measure things. Either way the HKM B-17G is a biggie that will take a fair while to put together, as it has a total of 577 parts. 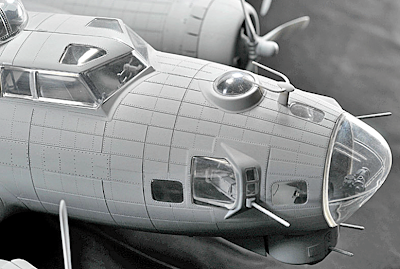 Detail is excellent throughout, with neatly-recessed panel lines and rivets aplenty on the outer surfaces - more than 800,000 of them, according to HKM. 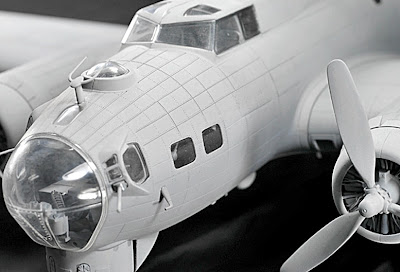 It’s worth noting that crew figures are not supplied, so if you like a crewed-up aircraft, then you’ll have to source these separately.

Photo-etch parts are supplied by HKM for detail items such as seat belts and intake grilles, though there is no choice where it comes to markings. Perhaps surprisingly, there is just one marking scheme provided as standard, for the yellow-tail aircraft depicted on the box-top, nose-art name ‘Milk Wagon.’ 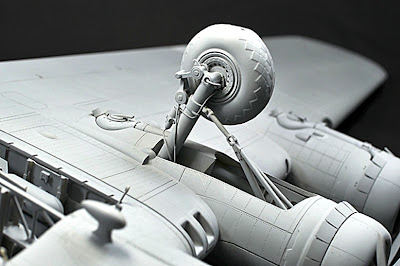 The landing gear can assembled up or down, and bomb-bay doors left open or shut. Unlike the crew, HKM has given the B-17G a full complement of bombs. Control surfaces such as the ailerons, rudder, flaps and elevators are supplied as separate components, to be positioned as you wish.

A nice touch is that part of the upper fuselage is supplied as a drop-on component, allowing you to remove it to inspect the intricate internal detail, from flight deck to radio room. 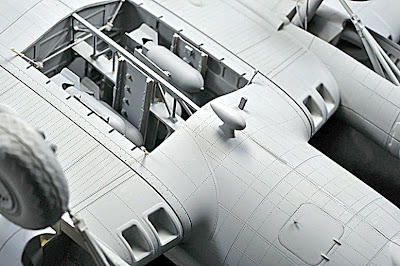 So you’ve built it, and you have a metre-square place to show the beast off. But what if you don’t have that sort of real estate? HKM have supplied an answer of sorts, in the form of a wall-mounting kit that connects to the inner bomb bay. It’s an HKM take on traditional TV-mount systems, in this case allowing the model to ‘land’ on the wall, with landing gear extended. The third display option is a standard one - just hang it from the ceiling, using lengths of strong nylon fishing line.

Summation
Looks like a winner for World War II aviation fans. Prices for the big beast are going to be variable depending where you live, but for the moment we are looking at a Japan-sourced price around the £180GBP ($280USD) mark, which for a metre-span megakit doesn’t sound too bad - but do make sure you have the display space.

The online Hobby Link Japan store is offering discounts on the B-17G here.


Other B-17 Flying Forts available here.