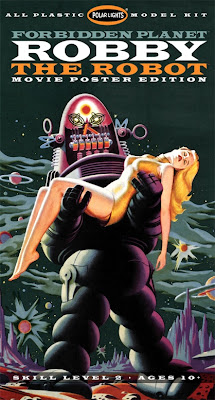 Mat Irvine: Robby the Robot, mechanoid star of the classic movie ‘Forbidden Planet’ is now available as a 1:12 scale ‘Movie Poster Edition’ kit that depicts the space-girl Altaira in its arms.


This new Robby kit (the second from Polar Lights) reproduces an excellent poster scene, in which the big robot is shown holding Altaira, the movie's lone female. To do this, Polar Lights designers have made a near brand-new kit, in which Robby’s torso and head remain the same as the earlier kit, but with new arms and legs, plus the Altaira figure.


New kit components are moulded in white, compared with the first kit’s tan shade. Notable differences in the mouldings include the legs (centre) and base (left). Oddly, the optional claw-grip hands (bottom centre in white) are still included, though cannot be used in the new version. 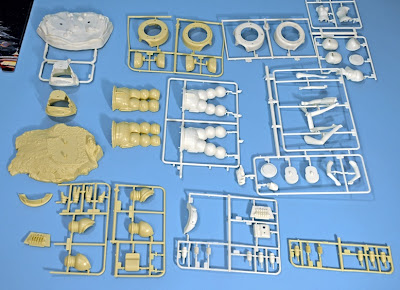 Translating dimensions
Talking with the designers at Round 2 LLC, I found that creating the kit wasn’t quite as straightforward as just deciding to make a straight reproduction of the poster. The image may work fine as flat art, but doesn’t automatically translate to three dimensions. In fact, the way that Altaira is held would probably  not work at all in model form, so some juggling of positions had to be made.

The stance of the robot is different for the new kit. The old Robby (below left) stands in an erect pose, the new one has its legs apart, ready to take the weight of the beautiful Altaira. 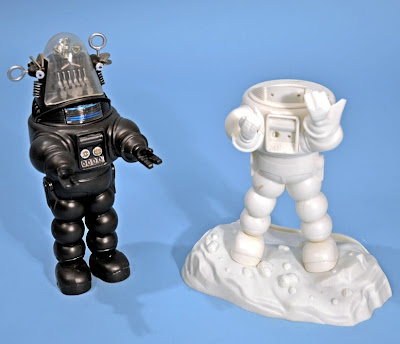 Differences left and right
There is another difference that the kit does not supply, but which can be corrected by a reasonably competent modeller. Robby’s ring scanners and transducers (‘ears’) are angled at 90 degrees, compared left-to-right. The right-hand scanner ring is horizontal, with vertical transducer semi-circular rings. On the left-hand side, the angles are reversed. However, the poster depicts them the other way round - so if you want to go the poster route, cement the transducer parts in place first, saw off the outer sections, then swap them over.

One change I made at a late stage (below) in assembling the old and new kits was to ‘swap over the ears.’ 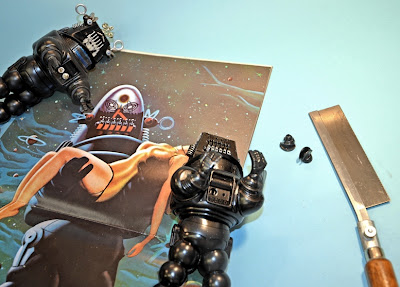 Colour shift
Some colours are different, though this is pointed out in the instructions. This most affects details under Robby’s clear domed head and the weapon neutralizers on his ears. They can be seen on both the box-art and poster, where they appear tinted red. In the movie itself, they are either clear or have a bluish tinge. The base is also different in the new kit, and a card backdrop is included.

A question of scale - is it 1:11 or 1:12?
Polar Lights lists Robby as 1:12 scale, though initially it was scaled at 1:11. And if you are wondering why this odd scale, blame Aurora. Although Aurora hadn’t made a Robby kit, it made the unnamed ‘Robot’ from the TV series, Lost in Space (LiS) for which it had used 1:11.

Polar Lights retro-engineered the LiS Robot to the same 1:11 scale. Then it made the brand-new Robby kit, and as this had to match, there is a direct lineage from the Robby special-effects prop to the LiS Robot. The first Robby issue even stood on the same base design that Aurora used for the LiS Robot.

However 1:12 scale is more conventional, and there is always the argument as to how accurate kit scales are anyway, so this new kit is listed at 1:12 scale.

Whichever scale you choose to believe, the assembled and painted new Robby and Altaira (below) look excellent, especially set against the supplied backer board. 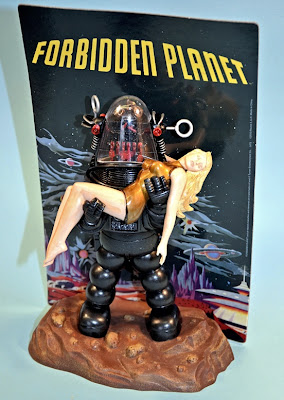 Early Polar Lights box-art for the old kit (below) also showed the poster scene, despite the fact that no Altaira figure was included. Sensibly enough, Polar Lights later featured different artwork that did not include her.

Kit history
For many years Robby the Robot was conspicuous by its absence as a traditional model kit, and was often called, ‘the classic kit Aurora never made.’ This lack was eventually rectified by a Comet Miniatures 1:8 scale multi-material kit, followed by the 1999 Polar Lights item in traditional injection styrene.

A kit of Robby carrying Altaira has also been done in a Jimmy Flintstone production (below left), albeit with Altaira's shapely legs in a non-poster attitude, and we featured it here. 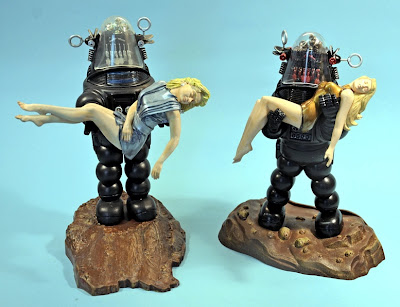 Summation
The 1956 movie 'Forbidden Planet' was made as a loose re-working of Shakespeare’s ‘The Tempest’, in which Robby the Robot played the spirit Ariel. The poster scene which is the basis of this new kit never actually appeared on-screen - Robby did carry various objects, but not Altaira! No matter - it made a great-looking poster, and now this Polar Lights kit makes it possible to match poster to model.

The Polar Lights kit is a neat production that echoes a classic piece of science-fiction imagineering. 1:12 scale makes Robby a perfect size for shelf-top display.