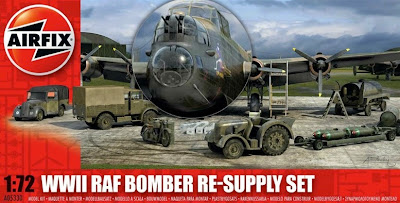 
Of course, aircraft themselves are the hard-core focus of attention in any diorama setting, but sets like this make the process of modelling the background detail relatively easy.

The Airfix Resupply Set is packed with useful stuff, and we suspect that two or more packs will be on many modelmakers’ must-buy lists.

In fact, you’ll need two kits to make up the Bedford trucks - a bit of cheapskatery means that alternative parts allow only one type to be made from parts supplied in the box. Still, the spare components would look OK as extras in a simulated airfield parts dump.

Apart from this quibble, an excellent and interesting kit that deserves to be popular 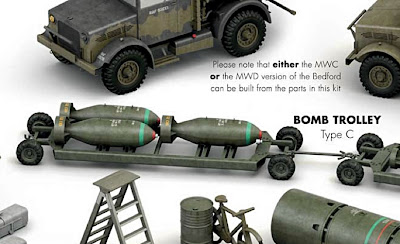 What Airfix says
“...As the air war over occupied Europe progressively developed, so did the equipment used by the RAF and its Bomber Command. Specialist vehicles were introduced to supply arms and equipment to waiting machines and maintenance tasks were made easier through the introduction of specialised equipment.

“The mechanization of these tasks and duties is well represented in this set. While not as glamorous as their flying counterparts, the contribution played by trucks, tractors, and vans, as well as the men that crewed them, cannot be forgotten, or underestimated.” 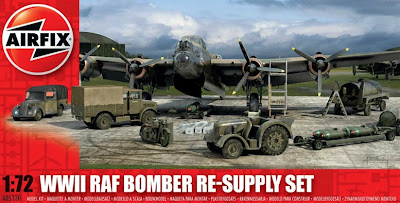