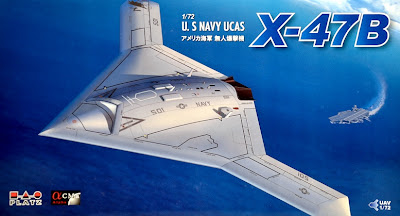 This kit, from the Japanese model company Platz, represents the Northrop-Grumman X-47B, an unmanned US Navy aircraft recently in the headlines for its aircraft-carrier flight tests.


Mat Irvine reports: The Platz kit has 53 parts on two runners of light grey plastic, plus a comprehensive decal sheet, with instructions in Japanese and English. 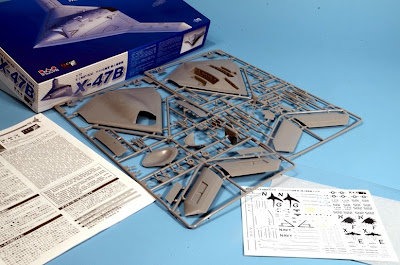 The kit is fairly simple to assemble, and the parts are an excellent fit, although care will be required with the tiny antennas on both upper and lower surfaces. 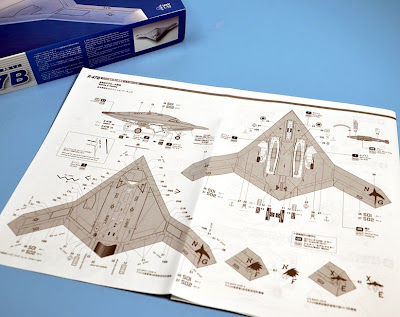 Most of the Platz X-47B is a dull neutral grey - FS (Federal Standard) 36270 - but the place where the cockpit for a human pilot might normally be is taken up by the engine intake. 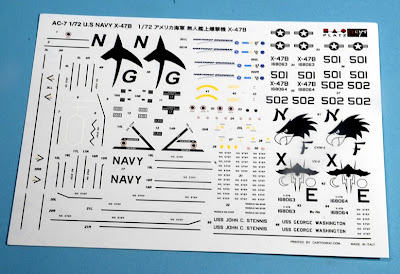 The recessed section of the intake is painted gloss white, a colour that also applies to the inner surfaces of the underside bays, wheel wells, and doors that close over them. 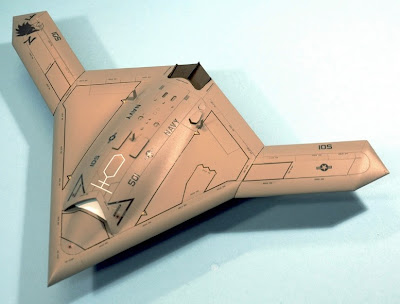 If you want to spray-finish in white, you will need to paint these parts first, then mask and apply grey over the top. This is also necessary as the kit is designed to be assembled with the landing gear down, all doors open, as shown below. Note that the edge seals are red, though this does not show up in many photos of the real thing. 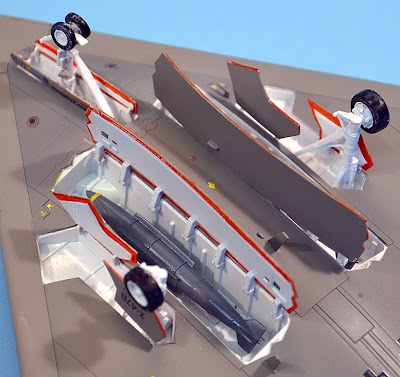 There is no option for building the model in flight-mode, and no stand is provided for this. However, it would be possible to remove the ‘hinge’ representations from the doors, and fit them in place, flush to the surface. These tasks would be relatively easy to achieve by any competent modeller. 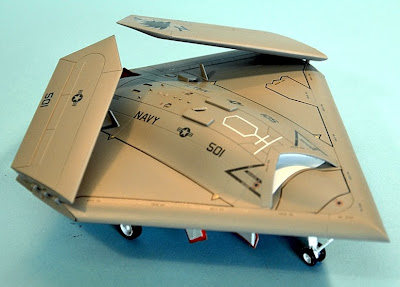 Even with the landing gear down, there are two options for finishing the kit. The X-47B is quite large, about the size of an F-18 Hornet, so it has folding outer wing sections for easy hangar storage. The kit can be finished with these sections folded, and the upper-wing airbrakes can also be assembled open or closed. Finally, two GBU-32 bombs are supplied, one for each weapon bay. 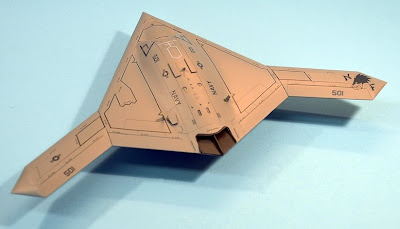 The only item not featured in the kit (an odd omission, as it is visible in many photos) is the arrester hook, necessary for aircraft-carrier use. 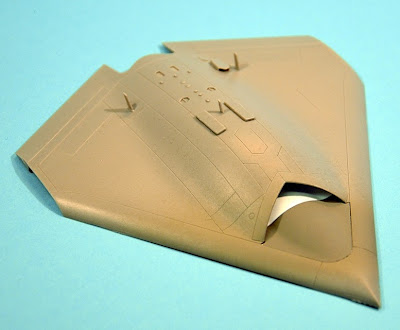 Note the upper surface intake and assorted antennas. The air intake is fitted into place from the inside (below). Note that it has already been painted gloss white on the external side. 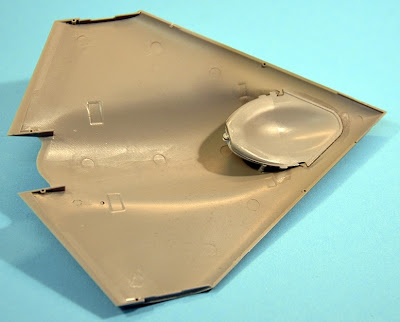 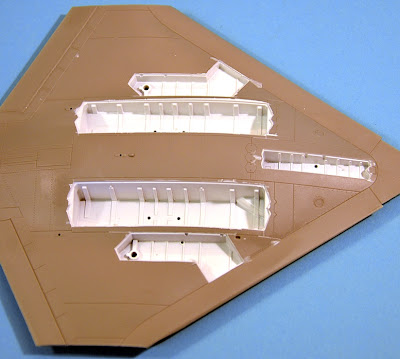 Painting the landing gear and weapon bays gloss white (above) is followed by masking them off, so the main neutral grey can be applied. 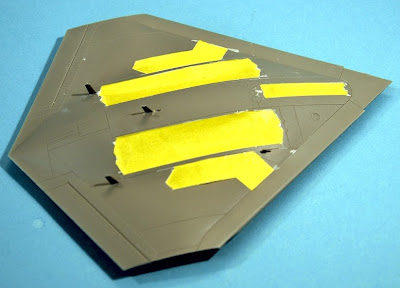 Probably the trickiest part of the build is in applying the decals. As with many modern aircraft, marker lines can be found on many of the surfaces. The decal sheet supplies all of these, and although they appear quite complex on the box-art, they are logical to apply. In some cases, other markings such as NO STEP, are part of the lines, which makes working out positioning easier. You can build either of the two X-47Bs, numbered 501 or 502.

The X-Planes
The X-Plane experimental aerospace craft series is the best known of all American research projects, and began with the Bell X-1 rocket plane, back in 1946. Below, X-47B 501 takes off from Edwards Air Force Base, California. 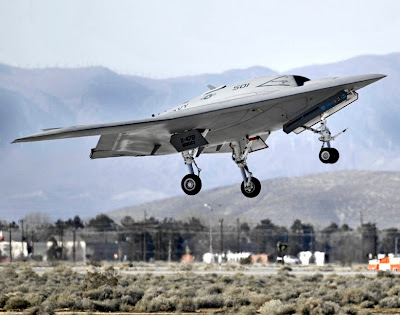 X-Series craft are not necessarily individual machines. They are designated primarily as overall research projects, so a single X number can be applied to several craft that may not be the same design. Below, X-47B 502 in flight, showing its upper surface markings clearly. Note the weathering, which on the Platz model can be replicated with some careful airbrushing. 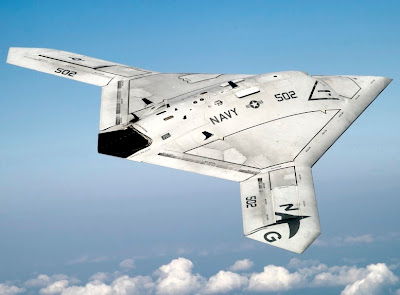 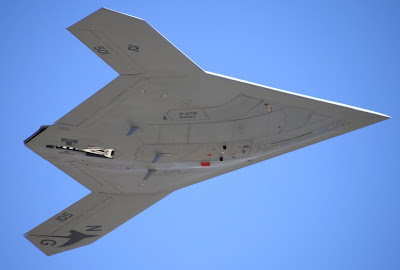 The X-47B took off from the aircraft carrier USS George HW Bush in May 2013. This was a record-breaker flight, being the first unmanned aircraft of its type to carry out carrier operations. The X-47B is shown below as it landed back on deck, and bottom, on a side elevator. 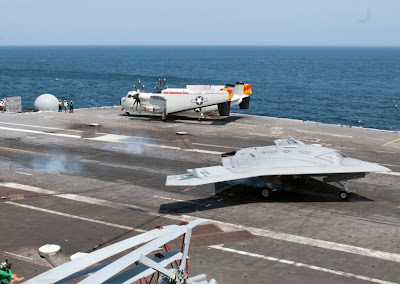 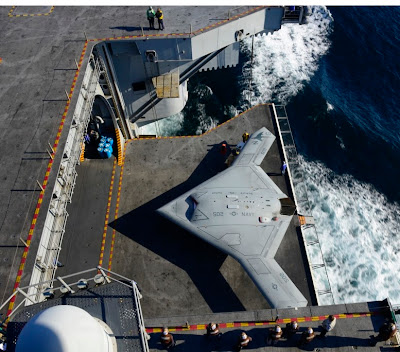