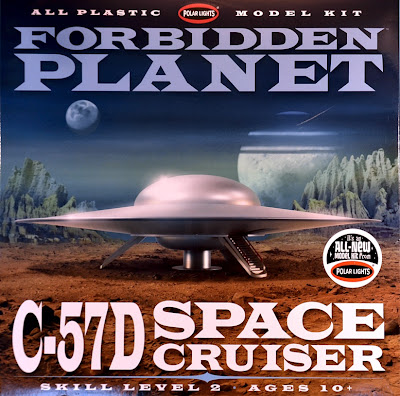 Forbidden Planet, ‘the’ classic 1950s science-fiction movie, memorably gave us not only Robby the Robot, but also the C-57D Space Cruiser. Polar Lights has already issued a larger kit of this flying saucer, but has now come up with a brand new, half-size version to 1:144 scale.


Mat Irvine reports: Opening the almost-square box reveals 22 parts in silver plastic and 17 in clear. This is a very simple kit to assemble, though it makes an impressive model when completed, being 304mm (12in) in diameter. 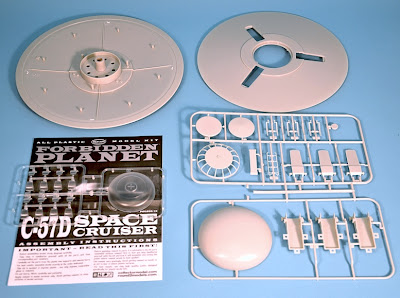 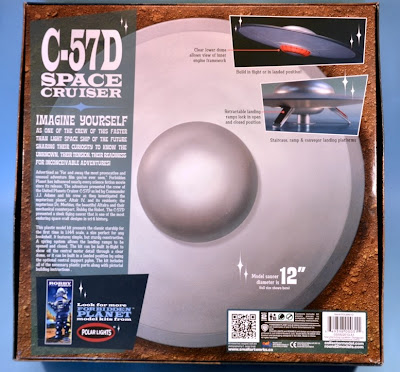 The main saucer components are individual upper and lower halves, held together with locating pegs. The upper dome is one large part while the lower dome that houses the engine is moulded in transparent plastic. This can be left clear to show engine detail, or overpainted to match the rest of the hull 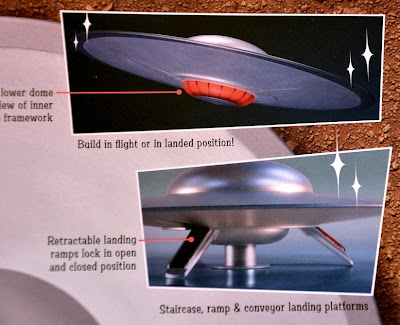 There are two basic build options. In flying mode, the C-57D has its landing gear retracted, the ‘glowing engine’ revealed under the clear dome. In landing mode on the desert floor of Altair IV (and how it is seen for most of the movie) the landing legs are down, as are the entry steps. 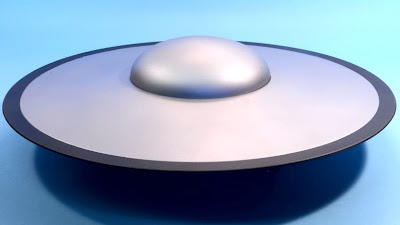 There is no supplied stand for flying mode, but the instructions indicate that you should suspend the C-57D by a nylon line, achieving this by opening up a hole in the upper dome, conveniently indicated with a dimple on the underside of the part. 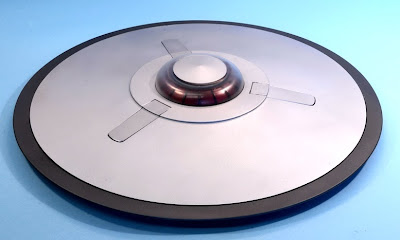 On the ground, the C-57D sits on the lowered engine centre-section, balanced with the help of three landing legs, one of which also forms the stairs for the crew, while a second has a conveyor belt for equipment. The third is just a leg, though some sources indicate it should also have a conveyor belt. The legs can be snapped in the raised or lowered position. 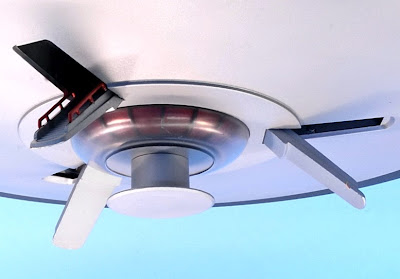 The colour of the craft is silver, basically the colour of any self-respecting flying saucer, though the saucer’s outer ring is a darker shade. I painted the review kit in Testors colours, using Gloss Metallic Silver spray, with the darker ring in Titanium. However, these shades can be matched with similar ones from Humbrol, Tamiya, Revell-Germany, or even Alclad, which makes excellent metallic paints for airbrushes.

The only splashes of colour are red handrails for the stairs and 16 engine panels. I brushed on Tamiya Clear Red for the latter. 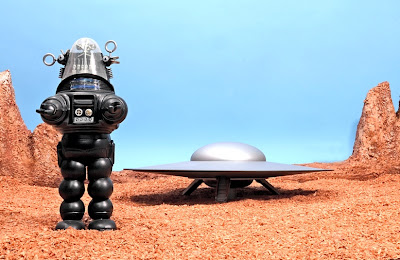 Unfortunately, no figures are included in the kit, which ought to be possible, even at the small 1:144 scale. However, I sat the completed C-57D model in the background of a desert diorama, with the Polar Lights Robby in the foreground to produce a classic scene from this classic movie. 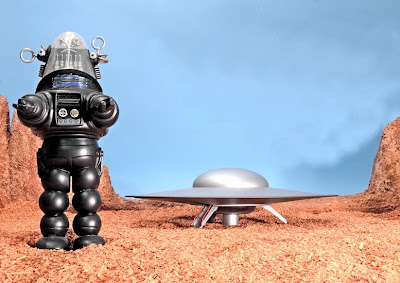 A word about the first Polar Lights C-57D kit. This was first issued in 2001, and is to 1:72 scale, with a saucer diameter of 710mm (28in). The kit has a complete interior, and lift-off panels, though originally this too had no crew figures, just Robby the Robot - and he didn’t even travel on the ship! However, Polar Lights reissued the kit in 2009, this time including a selection of figures. Alternatively, 1:72 scale figures are widely available, and with a bit of modification could be made to resemble the astronauts in the movie. 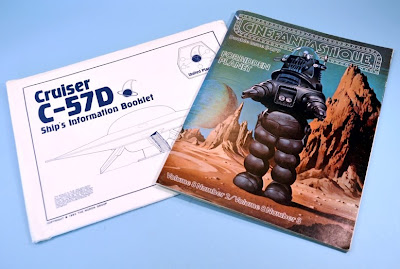 There is one overriding query with both kits, and that is scale, a quandary that applies to many, arguably most, models of science-fiction craft. 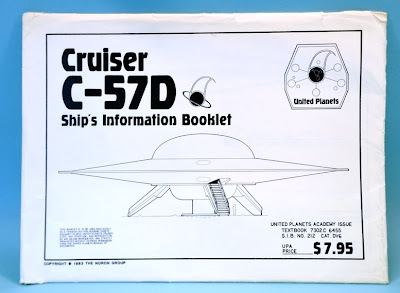 This is not helped as there doesn’t appear to be any definitive ‘real’ size ever given of the ship. The largest special-effects miniature was 2235mm (88in) in diameter (and there were also several smaller models) but this doesn’t give any indication of a what a full-size ‘real’ C-57D would be. 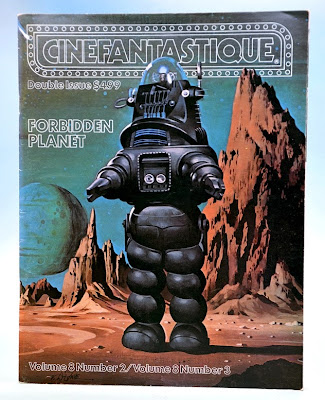 The nearest clue is a quote published in a 1979 double-issue of the specialist movie magazine ‘Cinefantastique’, that gives the intended size of the C-57D as 100ft (30m). This was based on quotes from various members of production crew at the time, borne out by taking calculations from stills of the movie, where the whole of the ship is seen and with figures in shot. If this is the case, the smaller model works out to around 1:100 scale and the larger to about 1:43 scale. 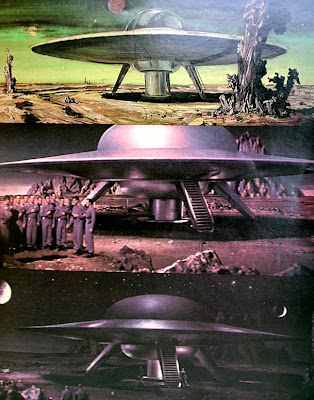 But with these film shots you are not usually looking at a real image. Part of the lower section of the saucer - the stairs and landing legs - was built as scenery, but other shots are composites using special effects miniatures or artwork, combined with real actors on the film stage set. Consequently the size of what could be a ‘real’ C-57D, is really arbitrary. 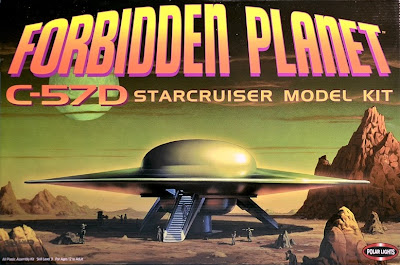 Other estimates have suggested the craft is as large as 175ft (53m) in diameter, which then makes the scales respectively 1:175 and 1:75. Then again, plans in the ‘Ship’s Information Booklet’ for the C-57D, issued in 1983 from The Norton Group, indicate the diameter as 162ft 9in (49.6m). So here, putting aside the dubious reasoning of a such a precise figure for what is after all a piece of fiction, you have potential scales of 1:163 and 1:70.

Old and new kit boxes are shown above and below. Reasonably enough, the 1:144 scale is the smaller of the two. 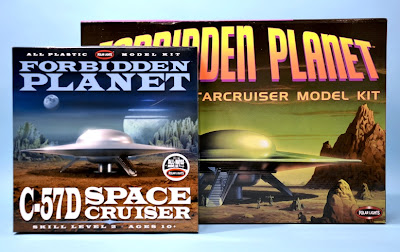 So you have to take your pick where scale is concerned, but it is still good to have a new kit of the spaceship from one of the best science-fiction films ever made.