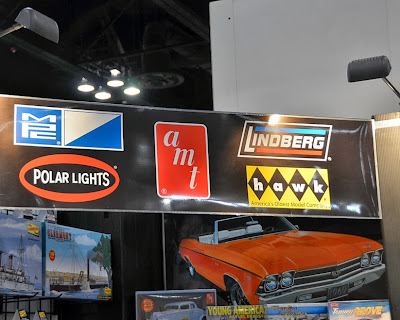 iHobby Expo, the main showcase for what’s new in US model-making, returned to the Chicago area from October 3-8, 2013, after a brief relocation to Cleveland, Ohio, in 2012.


Although it’s back in the Chicago area, the Show has moved venue, from the Donald E. Stephens Convention Center in Rosemont, to the Schaumberg Convention Center, located about 10 miles (16km) away to the west. 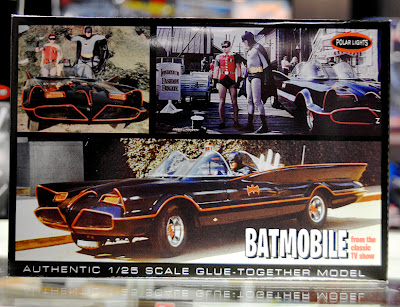 Reboxed Polar Lights TV Batmobile (above) in an AMT-style box. Reissued car kits from MPC and AMT (below). Some, such as the 1996 Nova, have new-tool parts. 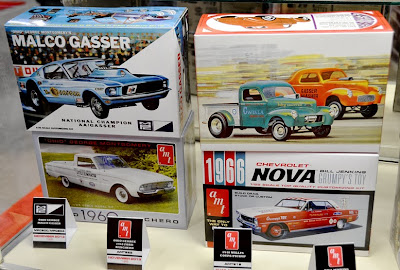 Schaumberg is one of the main business centres of the area, and is also home to the giant Woodfield Mall. The new venue is smaller than Donald E. Stephens though, and the number of exhibitors was down on previous years, though reportedly up on 2012’s Cleveland show. However, iHobby Expo 2013 still gave a reasonable cross-section of what modellers can expect to see in stores over the next 12 months or so. 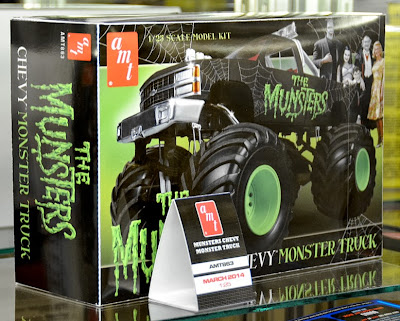 'The Munsters' theme (above) applied to one of AMT’s existing Chevy monster trucks. A presentation of Star Trek kits (below). Most are now under the Polar Lights name, but one (bottom left) is an original AMT Oddly enough, one of the major modelling names, Revell-Monogram, was not there, especially as R-M is located in Elk Grove, less than 10 miles away, but the no-show was a corporate decision by Hobbico, the company’s new owner. 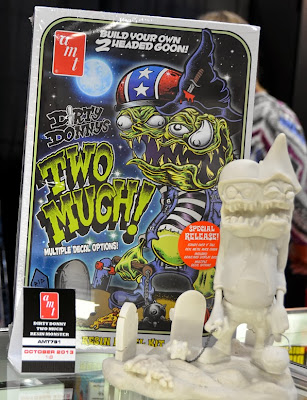 Perhaps a slightly weird new resin kit, especially under the AMT name, will be Dirty Donny's 'Two Much' (above) flagged as a two-headed goon. Maybe it's a potential successor to the zany world of Ed Roth. The 1:20 scale Surf Buggy (below) is a reissue of one of Lindberg’s classic kits. 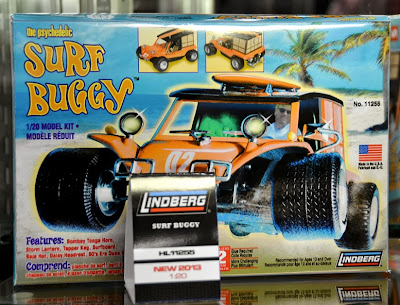 Most of the smaller companies had display stands, with Round 2 LLC being the largest. In fact, Round 2 is a major player these days, as it now owns five of the major American modelling names. Besides AMT, MPC, and Polar Lights, Round 2 recently acquired Lindberg and Hawk, both of which can lay claim to being among the oldest model names. Lindberg started in the 1930s, Hawk even earlier, in 1928. 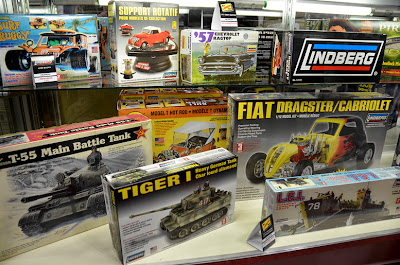 More from Lindberg (above)  that will become available from Round 2 over the next 12 months. Note that models such as the 1:32 scale 1957 Chevrolet (centre top) originated as Pyro kits.

A range of car kits (below) from three Round 2 names. The 'Back to the Future' DeLorean is the Polar Lights snap-together original, not the Aoshima kit that was also issued by Halcyon for the UK market and AMT for the US. The AMT Camaro police car is new in this form, while the MPC Monkeemobile was reviewed in SMN a few months ago. 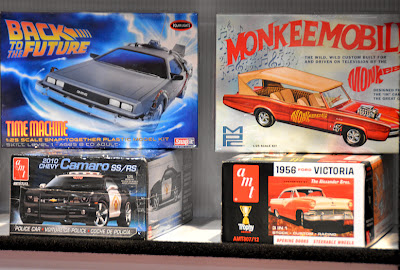 Even AMT is well past its half-century, as it began in 1948, though its all-plastic car kits did not come along until the mid-1950s. And it is with car kits that AMT is still best known, and although there is nothing totally brand new, many classic kits are being reissued, often with new-tool parts, such as the 1966 Chevy Nova. 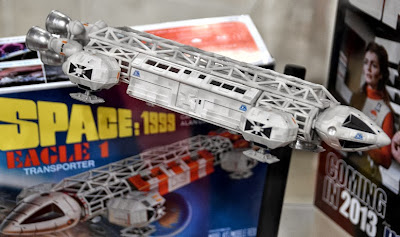 Three of the four MPC kits from Gerry Anderson’s TV series Space: 1999 are being reissued, the Eagle Transporter (above), Moonbase Alpha, and ‘The Alien’. The last actually only borrows the series name, as it is really a thinly-disguised modified reissue of the George Barris Moonscope, with a vac-formed base and alien figure. A fourth kit, the Hawk spacecraft, is still not listed, unfortunately.

Pleasingly for science-faction fans, the Lindberg US Moon Ship (below) will be launched again. Maybe the other three kits in this space series will follow - let’s hope so. The Moon Ship dates from 1958, and the new issue features a reproduction of the original box-art, though the box itself is bigger this time around. 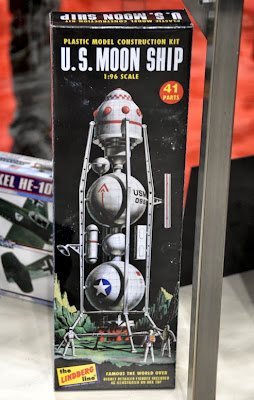 Polar Lights also has a number of Star Trek kits, the P-L brand being used for all new Trek kits, although kits that were launched originally under the AMT name will remain with the brand. There is also a reissue of the TV Batmobile, the first all-styrene kit of this to 1:25 scale. It will be available in an AMT-style box, though under the Polar Lights name. New Batman figures are also on the agenda.

Another welcome reissue from AMT is (below) the Star Trek Exploration set, 1:2 scale replicas, only ever issued twice, the last time in the 1970s. 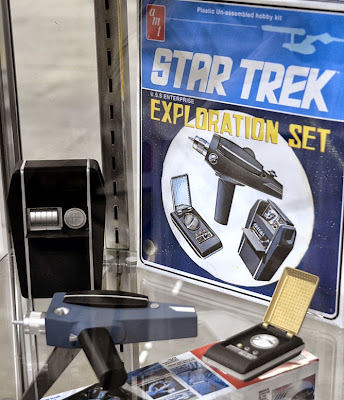 Polar Lights has a number of superheroes coming in 2014, including Thor, Superman, and Wolverine (below). All three will be snap-together kits. 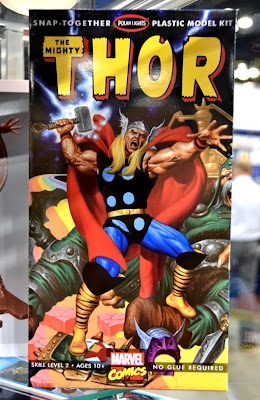 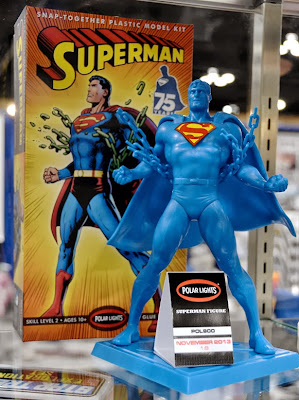 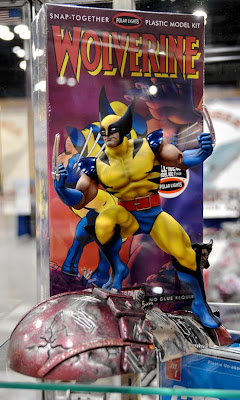 Two more Polar Lights figures will be from the classic science-fiction movie Alien (below). There’s a styrene-moulded Alien, and a kit featuring Executive Officer Kane (played in the movie by John Hurt) depicted kneeling over an alien egg case - and we all know what happened then!** 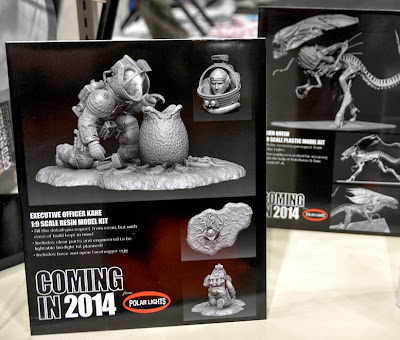 The Kane kit will not be a styrene kit, instead being moulded in resin, a material increasingly being used by mainstream model manufacturers, not just specialist ‘garage’ companies. This situation also applies to the AMT Dirty Donny 'Too Much' character, following on from AMT's two car kits with Dirty Donny decals.

An intriguing new fantasy kit (below) is from 'The Wizard of Oz', featuring the Wicked Witch of the West, with one of the Flying Monkeys. No details have yet been released as to whether it will be resin or styrene, or under which brand name - my guess would be a Polar Lights snap-together styrene kit. 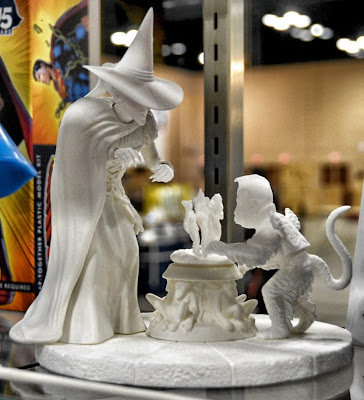 Most Lindberg and Hawk kits are being reissued as they were originally, though there are some exceptions. The Lawman Super Stock drag car (below) is a new version, based on the older Plymouth Belvedere, with new decals and over 20 new-tool parts. 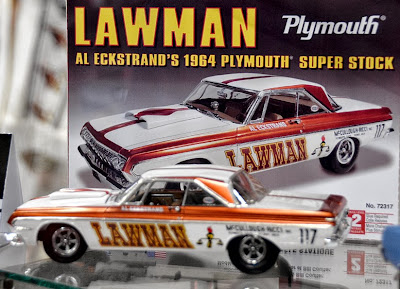 That's the end of this first iHobby roundup - another report coming soon.

*** Don’t know or can’t remember what happened to Kane? He was impregnated with an alien egg, culminating in the infamous chest-burster scene, an all-time shock-horror classic.

iHobby Expo takes over Schaumburg: US news-video report, with plenty of radio-control stuff. Wait for the ad to play first!