“WE’RE AT WARP 9.6 CAPTAIN: THE ENGINES CANNA TAKE IT ANY MORE!” “WRONG SHIP SCOTTIE: THIS IS A ROMULAN WARBIRD!” 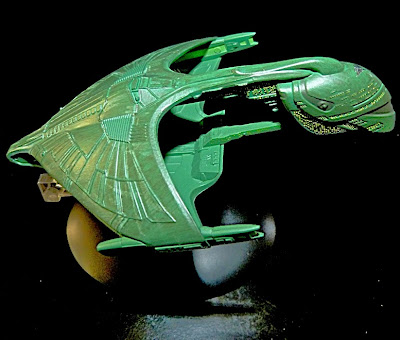 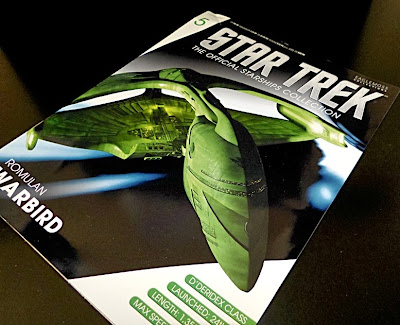 As usual with such publications, you get a colour magazine (above) in this case 20 pages long, packed with data and background information. The episode shown here is the fifth in the series, a leaf-green Romulan Warbird. 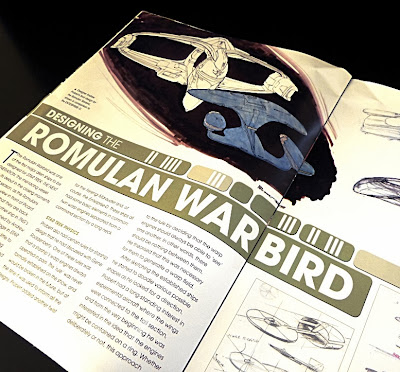 Conceptually a 24th Century design, the Romulan D’Deridex Class Warbird is a biggish ship, some 1.3 km (0.84 mile) long with power to match at a maximum Warp 9.6. The power supply is nifty, the Romulans having designed a mini-black hole that creates an enormously strong gravity field. So now you know - and there’s plenty more info like that to read in the magazine. 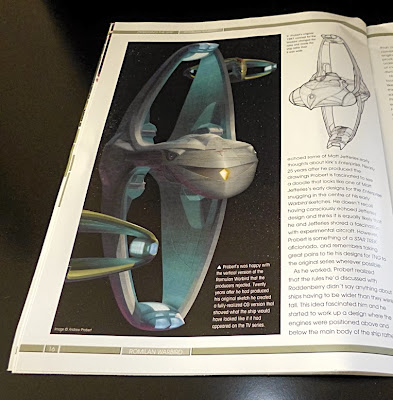 Apart from the pseudo-science, there’s a lot on offer in the mag, including designer details on the creation of the ship for the series. It's fascinating stuff for sci-fi nerds like me - note the alternative vertical design shown above. 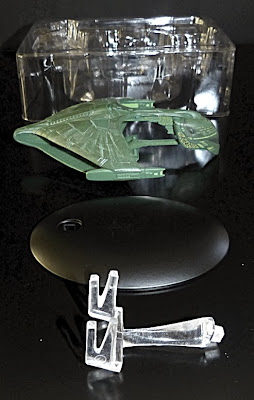 What do you get apart from the mag? There are three components (above) to this Romulan Warbird display, all contained in a neat card and acetate box. There's the starship, a black oval base, and a transparent support leg with twin slots at the top. Ship and base are satisfyingly heavy and cool, indicating resin as the moulding material, and it works very well, allowing for plenty of detail at this size.

How’s the model? Quite cute actually, with a length of some 135 mm (5.3 in) and wingspan of 85 mm (3.4 in). That translates to a scale of around the 1:10,000 mark - kinda small perhaps, but then again there’ll be room on the display shelf for an entire fleet of Star Trek spacecraft. There’s no point in displaying an in-scale crew though - at this size, a Romulan captain would stand no more than 0.2 mm (0.008 in) tall! 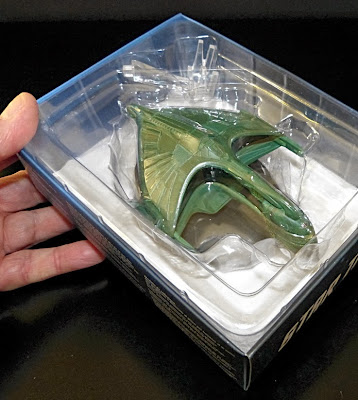 In fact, the level of detail is such that there’s not a lot even a keen modeller can add, apart from perhaps a slight whiff of airbrush weathering around the trailing edges of the ship. The black display base could be improved by adding some airbrushed stars, which would give it some character. 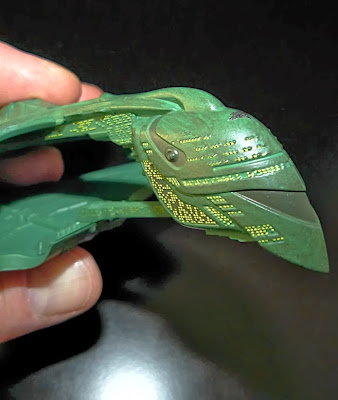 This is a neat series for collectors, and we’ll be looking at future releases with interest. 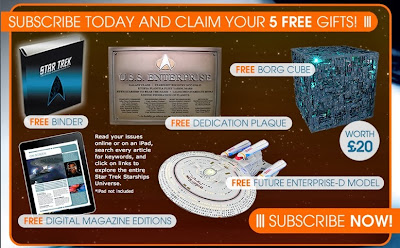