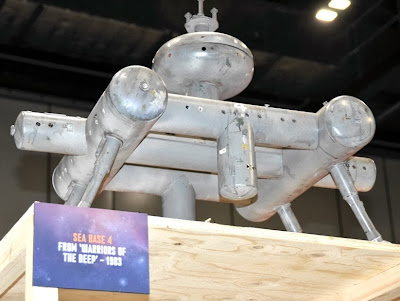 To coincide with the 50th Anniversary of the famed TV sci-fi series Doctor Who, a massive event was held at the giant ExCel exhibition complex in London’s Docklands last weekend, November 22-24, 2013. Among the exhibits was this Sea Base 4 from the 1983 episode, ‘Warriors of the Deep.’


Mat Irvine reports: Some 8000 Doctor Who fans passed through ExCel each day, taking in shows and talks by actors who have featured in DW stories over the 50 years. There were also props, costumes and scenery, and of course a wide range of merchandise, celebrating both the original TV shows (now called ‘Classic Doctor Who’) to more recent series (‘New Who’).

Visitors could also explore a display that celebrated the BBC Visual Effects Department, which of course was a large part of - especially - the Classic series. Visual Effects itself no longer exists, gone the way of most of the BBC departments that actually made the programmes. 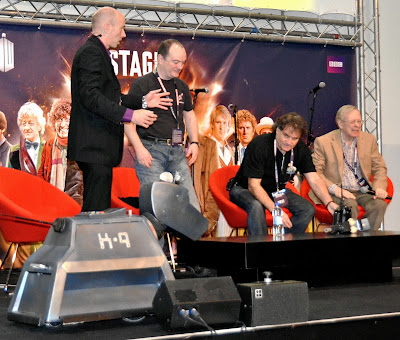 The Effects Team line up (below) in front of 11 Doctors. Left to right, Mike Tucker, Nick Kool, Alan ‘Rocky’ Marshall, and Mat Irvine. 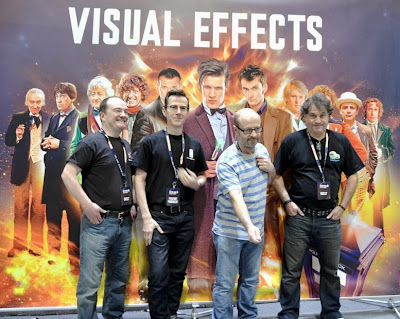 A set-up from Classic Who (below) features the miniature scene from ‘Warrior’s Gate.’ The unedited film was shown on the left-hand screen. 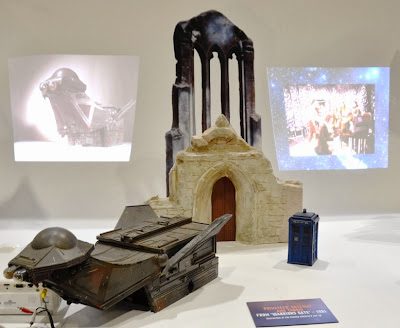 Now its work is done by a host of individual companies, many run by original members of the Effects Department. One is Mike Tucker, who now runs The Model Unit out of Wimbledon Studios, which has been supplying many miniatures for ‘New Who’ stories. This includes ‘The Day of the Doctor’ 50th Anniversary Special, broadcast on the actual anniversary day, November 23, 2013.

The Beam Machine (below) from ‘The Stones of Blood.’ 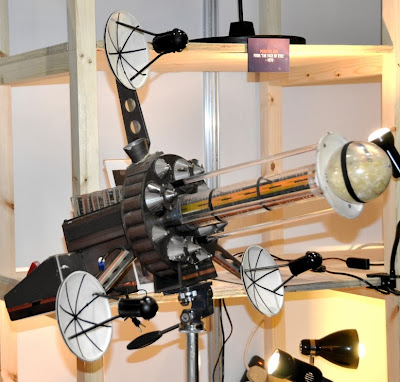 Also on the Visual Effects stand were long-time FX technicians Alan ‘Rocky’ Marshall and Nick Kool, and, I suppose representing Classic Who, myself. Between us we assembled a lot of props from down the years, and they were much admired by the hoards of visitors.

The larger gun (below) from ‘The Face of Evil.’ 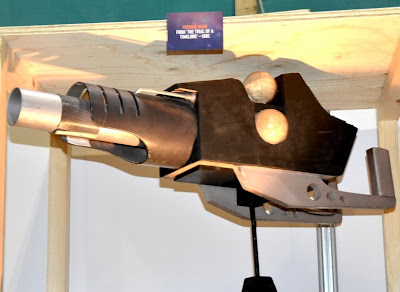 Intriguingly, the older props and models created the greatest interest, the oldest of these being a couple of items I built in 1972, as a very new FX assistant, for the Jon Pertwee story, ‘Frontier in Space’. Mind you, newer tales were represented at ExCel, including the large Russian submarine models built under Mike Tucker’s supervision for the Matt Smith story, ‘Cold War.’

The Gundan axe (below) from ‘Warrior’s Gate.’ 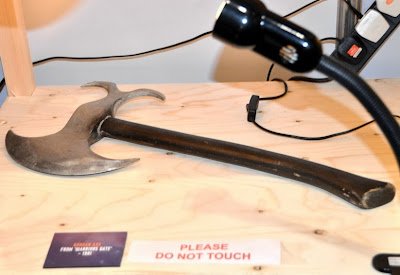 The ExCel event was a sell-out on all three days, but I can announce that for the fifth HaMeX show on December 8, 2013, I am planning to exhibit many of these props and models again. So if you couldn’t get to the Docklands event (or you want another look) come along to a slightly smaller version in December, and you can have your own special viewing!

Sentinel 6 (below) from ‘Warriors of the Deep.’ 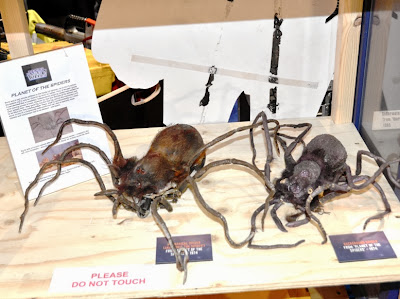 'Boris the Spider’ (and friend) from, ‘The Planet of the Spiders’ (above), while (below) the simulated ‘face’ from ‘The Face of Evil.’ 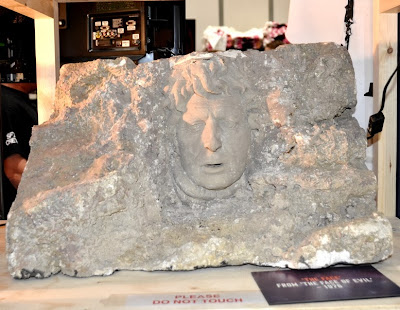 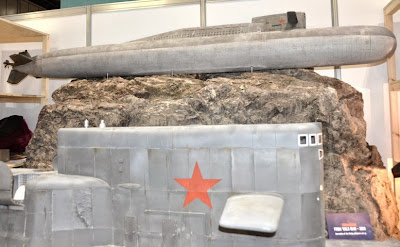 The large submarine models (above) were built for ‘Cold War’, while the centre of the cabinet (below) contains the oldest prop and model, the recording device (left) and small police spaceship (right) from the 1972, ‘Frontier in Space.’ 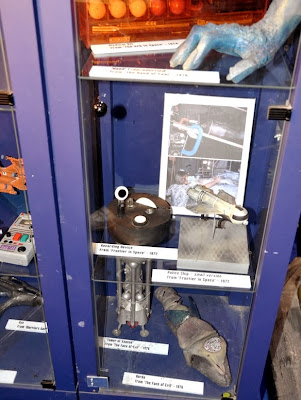 Real-life Mike Tucker (above left) meets a broadcast character of the same name. One of the many visitors to the Visual Effects stand, actor Terry Malloy (right) was there because he played the Mk III Davros in Doctor Who. In another BBC long-running programme (in fact, the longest-running) radio-soap, ‘The Archers’, he plays a popular character called Mike Tucker.

K-9 (below) meets his transportation mode for 1981’s ‘K-9 and Company.’ The Crayford convertible Austin Metro shown here was used in the original show, and loaned by its current owner, Alan Dowers. 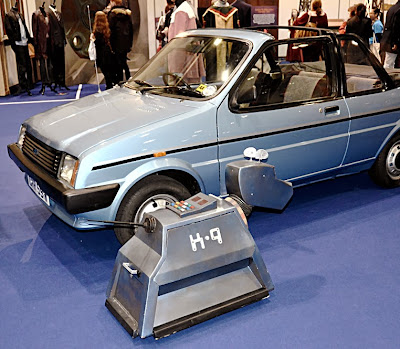