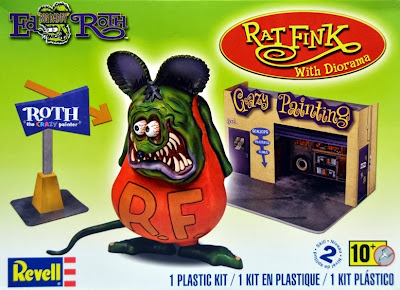 Here’s a homage to the late, great ‘Big Daddy’ Ed Roth, king of the Customizers and creator of the bulging-eyed Rat Fink rodent. Excellent news for all custom car fans, it’s available now from Revell. 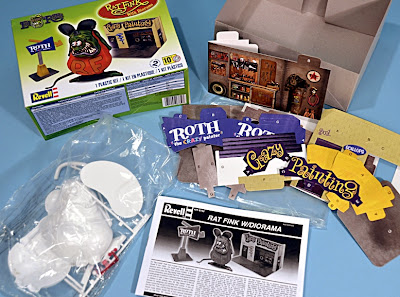 Mat Irvine: The late Ed Roth (he died in 2001) is probably best known for show cars such as the Beatnik Bandit, Outlaw and Road Agent, but he started his career as an artist, painting T-shirts and applying pinstripes to custom cars. This eventually led to his own auto creations, though he originally started these as advertising vehicles to show off his artwork.

Inside the box (above) with Rat Fink’s plastic parts in a polythene bag, while (below) the nine components reveal a super-simple construction job. 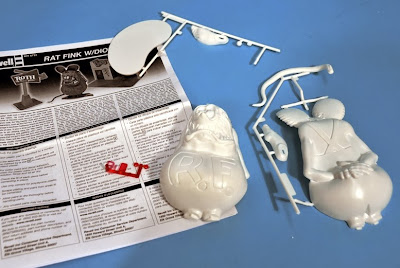 Revell’s latest Ed Roth model kit is a card diorama of one of his early garage workshops. It’s complete with the ‘Crazy Painting’ sign over the garage and, just in case people still haven’t got the point, a free-standing sign that adds ‘The CRAZY Painter.’ Card dioramas are not new to kit companies working mainly in plastic, for AMT did a wide range of them in the 1960s and 1970s, and Revell produced a Route 66-themed series a few years ago. 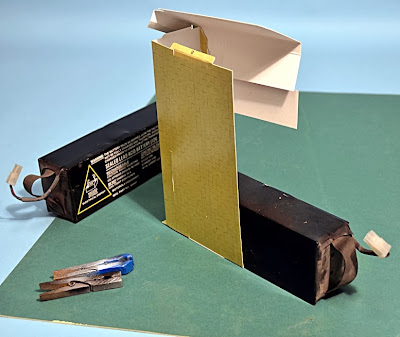 Battery packs from a long-defunct Motorola cell phone were used (above) as weights to hold garage sections down while the glue dried. The batteries also indicate why these phones were often nicknamed ‘bricks’!

The card parts are pre-coloured and pre-cut, so assembly is a matter of pushing the parts out, folding them, and gluing the tabs. For the last, a white (PVC) glue is recommended, though clear adhesives would also work, or even double-sided tape. 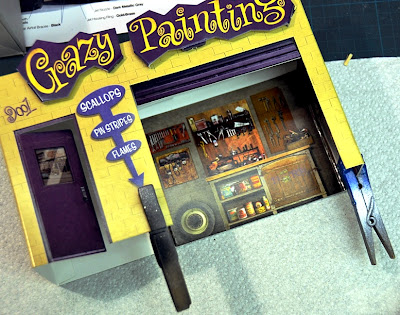 Weights and clamps are useful until the glue dries, with clothes pegs being a cheap option for the latter. Clothes pegs and scissor clamps (below) were used for holding other parts. 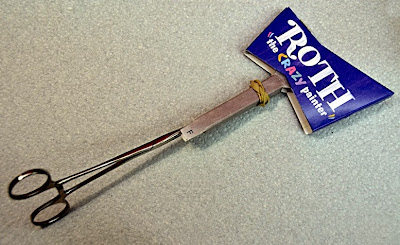 But that’s not all - you also get Ed Roth’s famous (or infamous) rodent creation, Rat Fink. Revell made this model of Rat Fink many years ago as a conventional injection kit, and he’s now included here. The rat is larger than the 1:25 scale garage, so although rats can be quite big, especially Rat Fink, perhaps he’s a bit oversized for this scale! A more in-scale Rat Fink was offered in the Revell kit of the Road Agent, along with an Ed Roth figure. 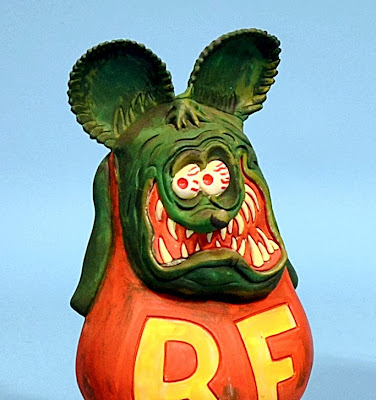 Giant-sized or not, Rat Fink is easy to assemble, with just nine parts in all, one of these being the base, so most of the work and final look is going to be in the painting. In some past images, Rat Fink been portrayed in grey, though here he is shown in green, wearing his usual, rather fetching, red romper suit with ‘RF’ in yellow. 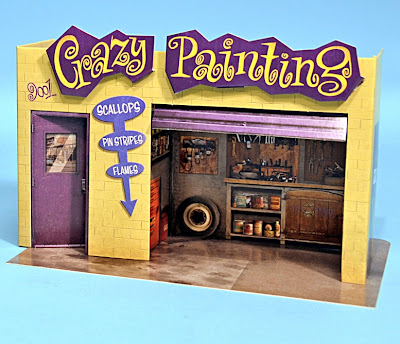 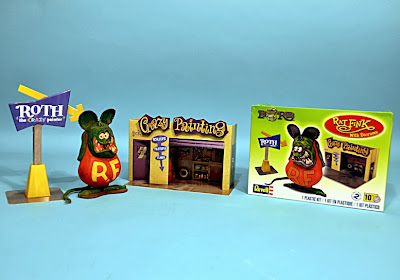 Thanks to Revell-Monogram for the sample kit. 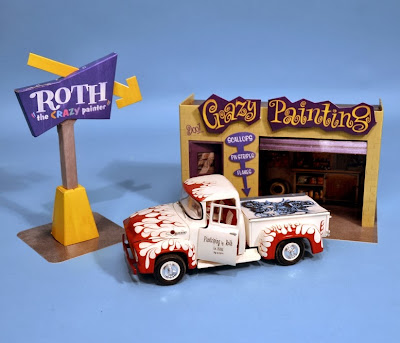 The garage with another Revell Ed Roth kit (above) a 1955 Ford pickup, finished as an Ed Roth mobile advertising vehicle.

The Outlaw (below) is another Revell Ed Roth car. Note also the 1:25 scale Ed Roth figure, this from the Beatnik Bandit II kit, and the much smaller Rat Fink (far right) is from the Road Agent kit. 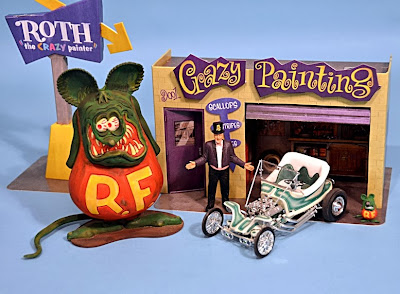 The Surfite model - real thing built on running gear from an early BMC Mini - included an injection-styrene Tiki Hut (below). There was no Ed Roth figure in the box, though the feet sticking out of the window could be his! 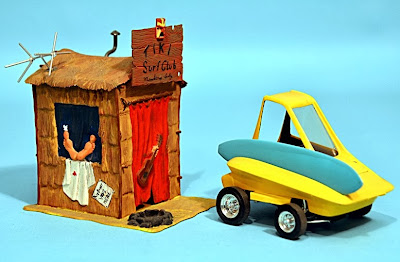