Excellent demo here from South African VFX-master Scott Newman. Being realistic, making a video this good might be beyond many of us, but no matter - it looks great and is something to aspire to.
The Russian Mil-24 Hind gunship is a big helicopter, and has been modelled well by various manufacturers, including Revell, with its 1:48 scale kit, which Scott used in this video.

Assembly is reasonably easy, with enough internal detail to be convincing, especially under the two big nose canopies. Plenty of weapons are supplied - rockets, missiles, and nose cannon - so the big beast can be modelled loaded for bear with minimum effort, or resorting to third-party suppliers. 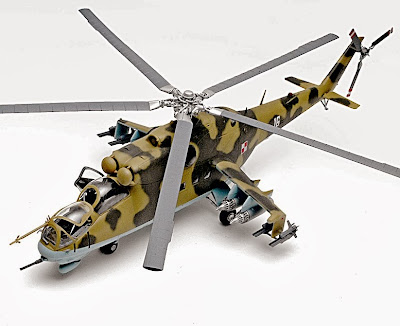 The kit has 150 components, and when assembled measures some 405mm (16in) long, showing what a big beast the real thing is. Crew figures are supplied, and if painted carefully, they can look really convincing.

As for the VFX side of things, Scott's tutorial looks interesting (thanks Scott!) and of course, you can use the information to make a convincing stills pic if you don't want to make a movie.

Plenty of Mil Hind gunships to choose from here.