JADE RABBIT ROBOT LANDS ON MOON: BUT HUMANS GOT THERE FIRST!

This movie dates back to the heady days of Apollo, when astronauts took the electric-powered Lunar Roving Vehicle (LRV) for a drive. The update here is to stabilise the video, allowing for a much better viewing experience.


The software used is called (wait for it) Deshaker v2.5 filter for VirtualDub 1.9.9 (blimey) and you can see the transformative effect, especially when you note the jiggling of the frame, which indicates just how much unwanted camera movement the software has managed to remove.

That was the real thing more than four decades ago, but today you only get to build a model. However, the Dragon 1:72 scale kit of Apollo 17 - the last Apollo mission - is a good rendering of the scene, a part of the Moon known as the Taurus-Littrow Valley.

The LRV covered nearly 36km (22.3miles) during its short stay on the Moon, astronaut-drivers Eugene Cernan and Harrison Schmitt being aboard the four-wheeled buggy for 4 hours 26 minutes in all.

The mission ended successfully, with crew and command module splashing down safely in the Atlantic Ocean on December 19, 1972 - 41 years ago today. 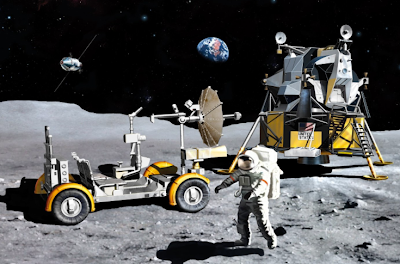 Meanwhile, we're betting that it won't take too long for the enterprising Chinese to bring out a scale model kit of the robotic Jade Rabbit rover (below) that landed on the Moon recently.

We're also laying odds that the next set of human bootprints on the Moon will be made by a Chinese Taikonaut (their name for astronaut). It'll probably take more than a spot of international competition to spur NASA and the US Government into meaningful action, so for now the SMN bet lies with Elon Musk and his aerospace outfit, SpaceX. 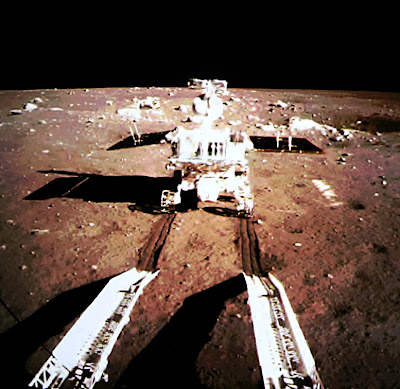