TEST FLIGHT: IN THE AIR WITH THE WORLD'S LARGEST SCALE RC MiG-25 FOXBAT 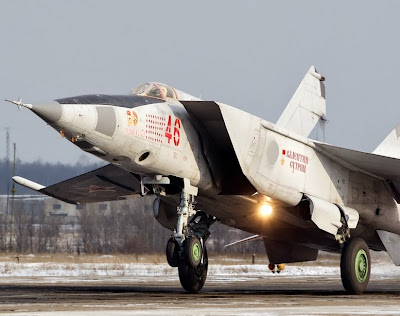 We don't do too much in the way of radio-control gear at SMN, though maybe we should if an amazingly huge model is anything to go by. In flight, it looks pretty much like the real thing (above) so be impressed with how they fly the mighty MiG-25 down under, in New Zealand.

The video shows the maiden flight of what is claimed as, "...probably the largest jet-powered scale model of a MiG-25." We're not going to dispute that, as at 4.2m (13.8ft) long and weighing some 42kg (92.6lb) the monster MiG is a mammoth model.

For this flight it was test-flown by 18-year-old Clinton on the first day of the ANZAC jet rally in Tokoroa, New Zealand. Unfortunately, the second flight did not go as well, and promised a video of that - and we can't wait to see the crunch!
Video posted by 'xjet' who has a video channel here.

Plenty of smaller scale MiG-25 kits and other stuff here.