INCOMING: NEW KITS FROM AIRFIX DUE FOR RELEASE IN 2014 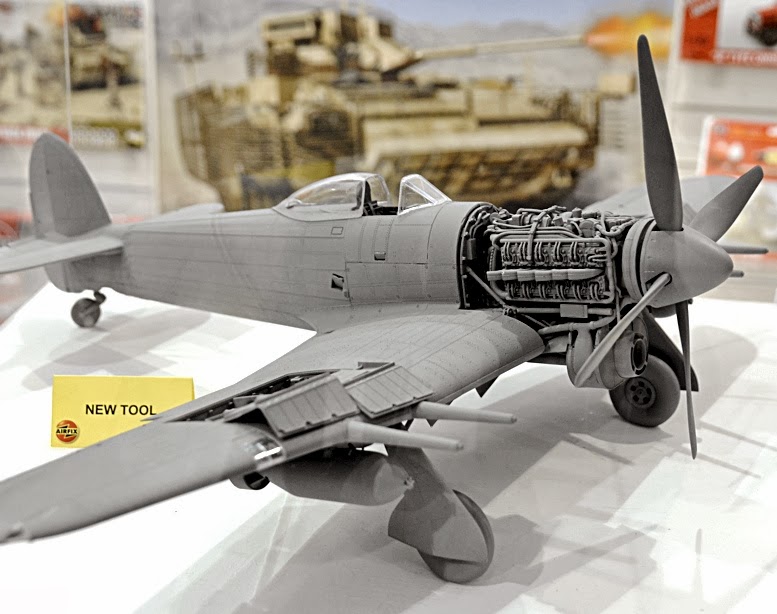 Mat Irvine: The 2014 London Toy Fair took place over January 21-23 at the Olympia Conference Centre. As I reported for last year’s LTF, the show is primarily concerned with ‘toys’ so the venue was full of items such as electronic games, teddy bears, and extras wandering around dressed up as cartoon characters.


However there were scale models at the 2014 London Toy Fair as well, so here is my roundup of what can be expected from the main kit companies during the year, starting alphabetically, with Airfix.

Airfix celebrates its 75th year in 2014, being started by Hungarian immigrant Nicholas Kove, in 1939. Initially the company made general items, plastic combs being the usual example given. The kit side didn’t start until a decade later, but when it did, the rest, as they say, ‘is modelling history.’

Many 2014 Airfix items were announced late last year at the IPMS Scale ModelWorld show in Telford, but London still had some newcomers to pore over.

2014 is certainly a significant anniversary for Airfix, but it is also of course the centenary of the start of World War I, so a number of diorama sets to recognize this are being prepared.

2014 is also the 70th anniversary of the World War II D-Day landings, providing opportunities for more sets, including vac-formed diorama bases, and a selection of Airfix vehicles and figures. Many of these are reissues from the vast Airfix catalogue, but there are a number of new-tool items.

London’s Olympia exhibition centre, venue for the 2014 London Toy Fair, which, on Press Day at least, was a bright and sunny, if cold, day. 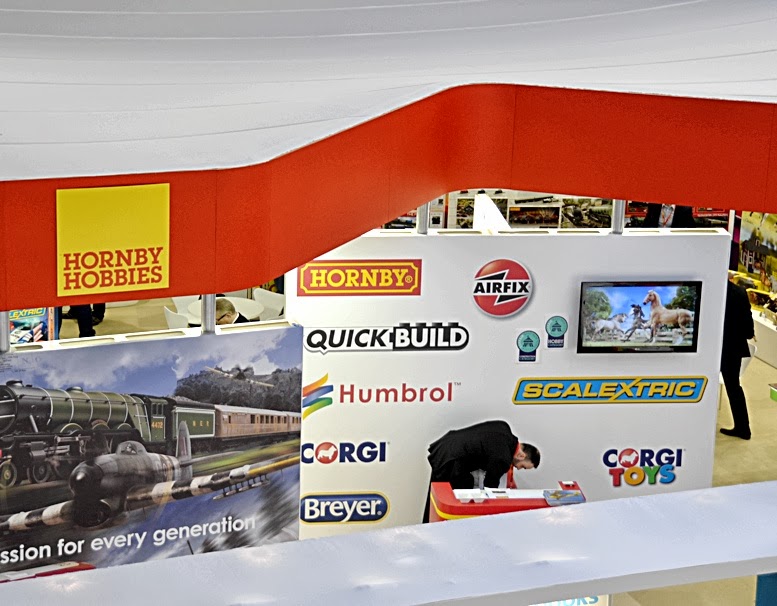 The Hornby booth (above) photographed from the first floor balcony. 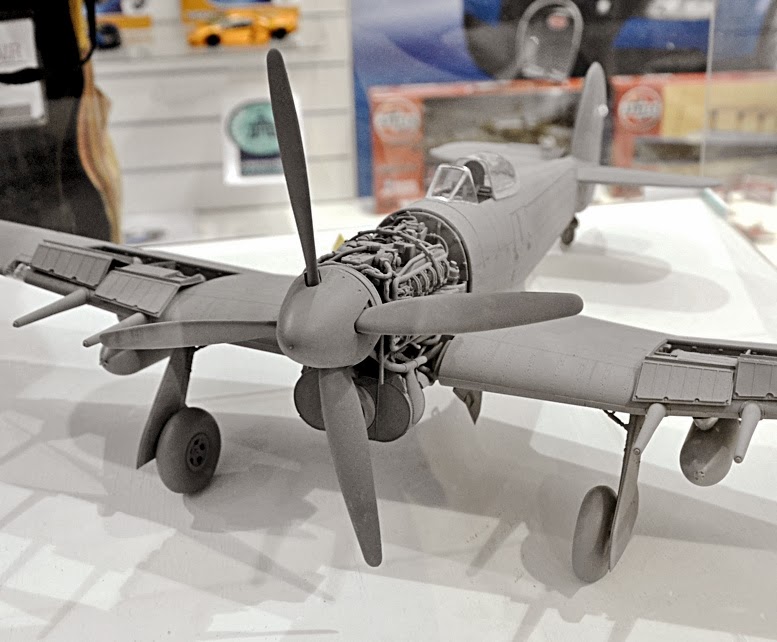 Sample box-art (below) for new WW I dioramas and reissues of the B-Type and ‘Old Bill’ buses. 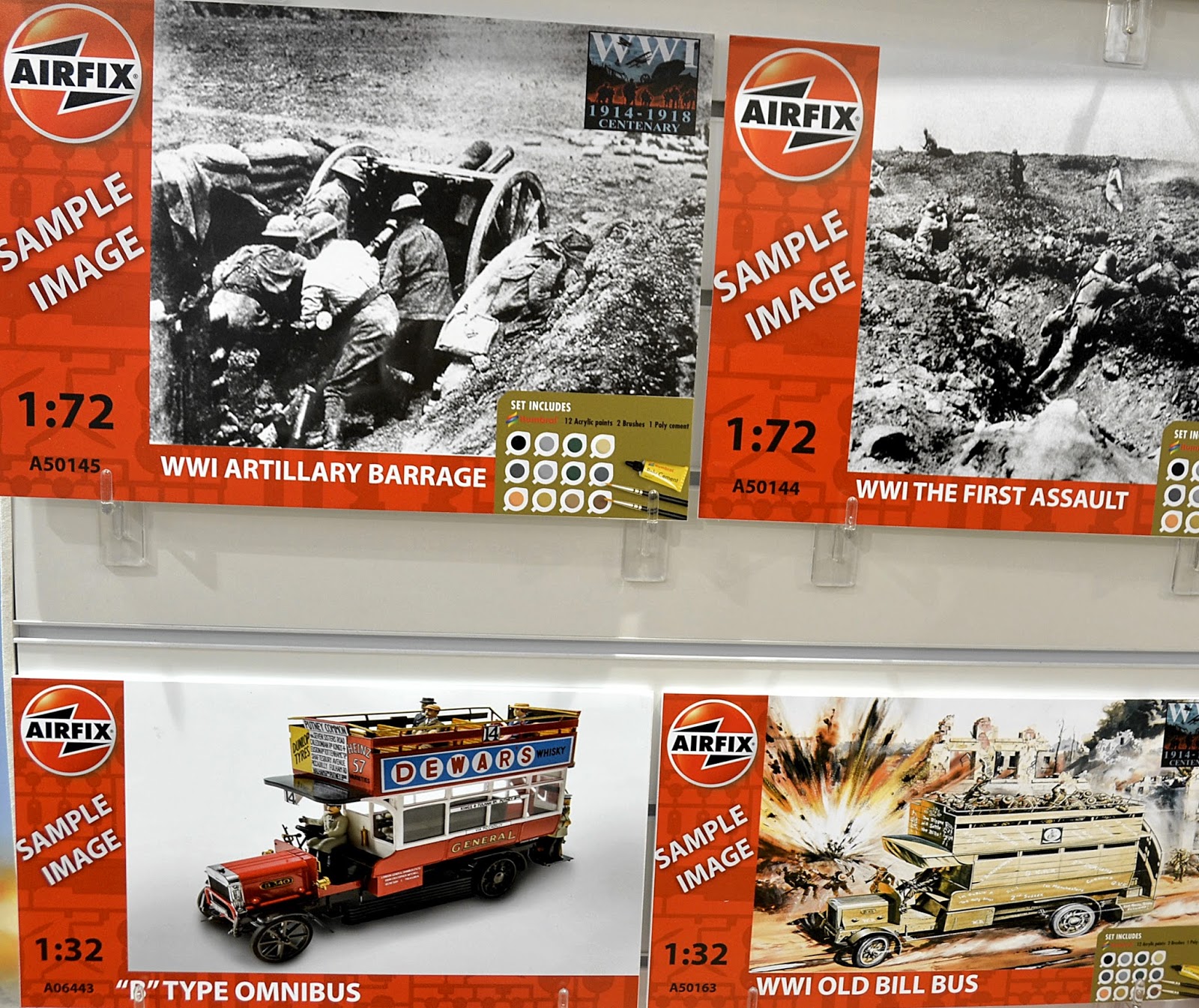 The third WW I diorama (below). 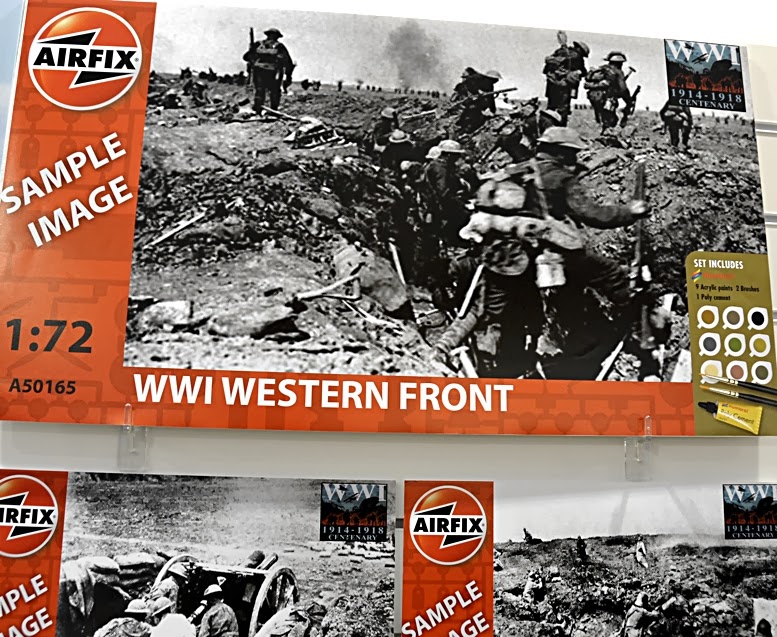 Another replacement for an old Airfix stalwart will be a new kit of the Douglas Dakota (below). This is one of two military C-47 versions, with the new Willys Jeep kit included in the box as a load. 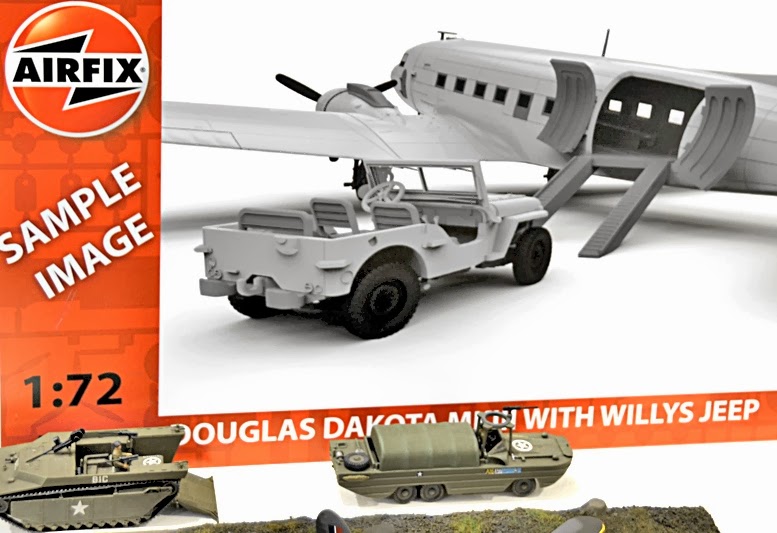 An alternative Dakota version (below) includes optional skis for an Alaska-based USAF machine. 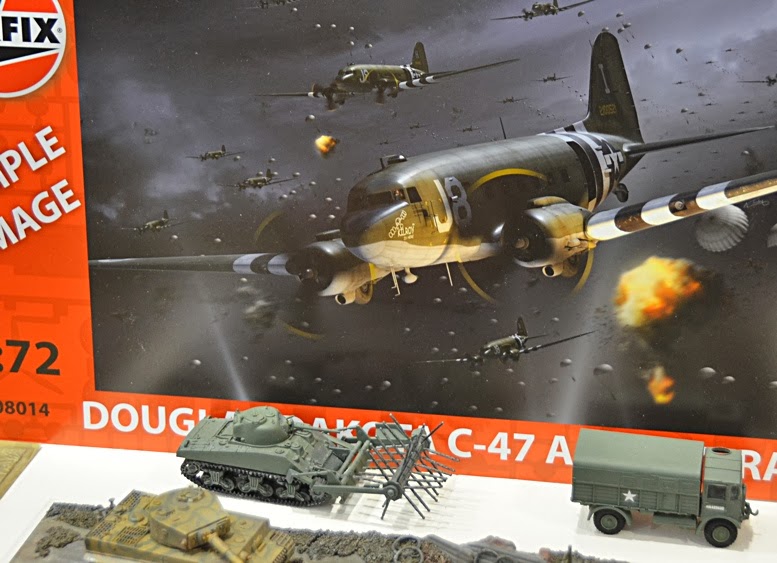 Built test shots and box-art for the brand-new 1:72 Austin Tilly and Bedford maintenance truck (below). A BSA motorcycle will also be included in the set. These will be invaluable for diorama builders. And to add to these, there will be more ready-made (though unpainted) ruined buildings and structures in resin, including a Polish bank, Czech restaurant, European city fountain, and flight of steps. 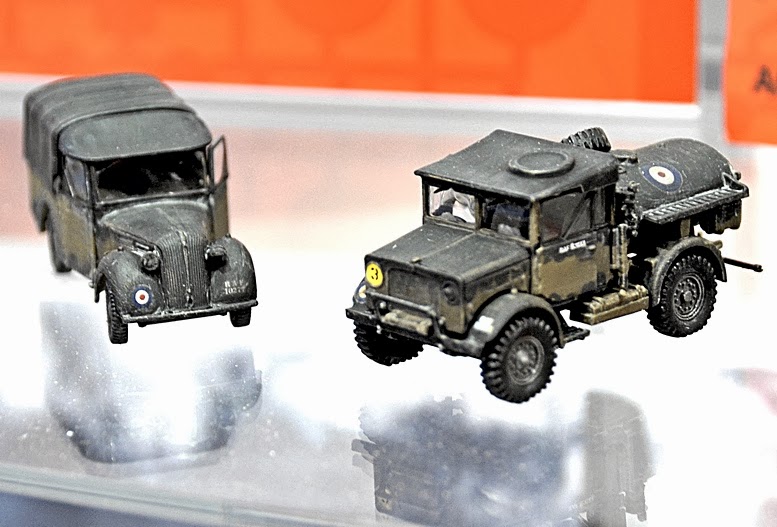 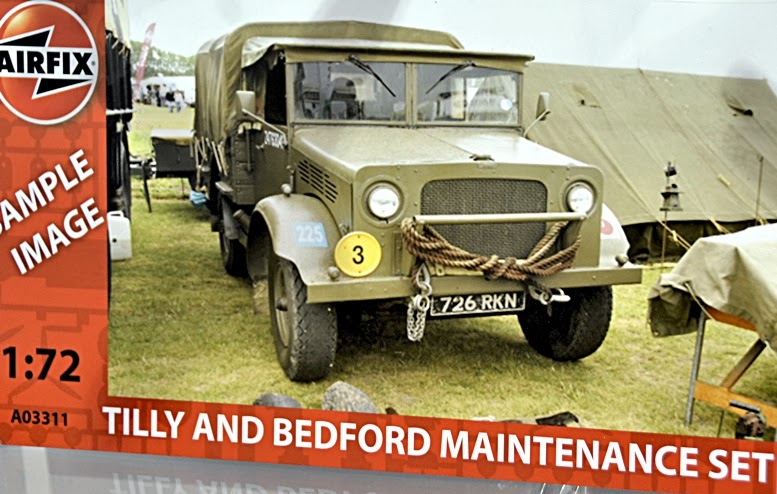 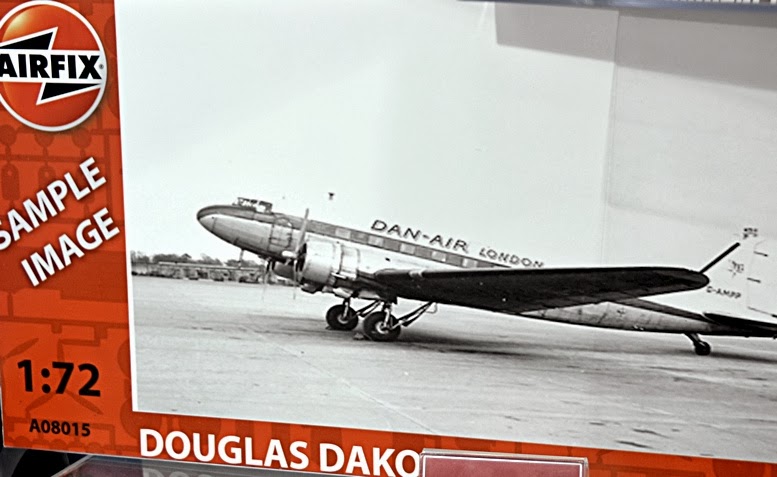 For 1:72 scale aircraft enthusiasts, the biplane Tiger Moth (below) comes as a new-tool kit with far more detail than the original model, which dates from early on in Airfix history. The box-art depicts a civilian version, the built test-shot, an RAF trainer. 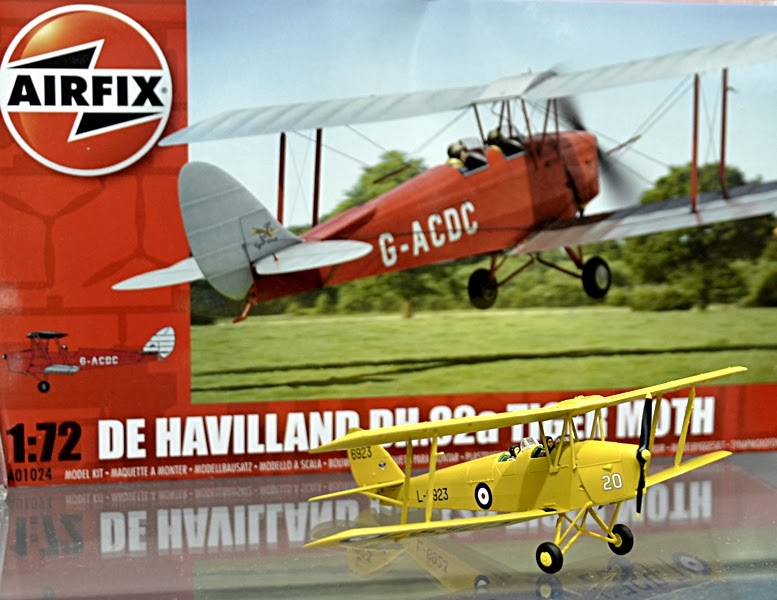 The Bristol Blenheim (below) is a new subject for Airfix, and will be made both as the Mk I bomber and Mk IV fighter variants, sample box-art here showing the Mk IV. 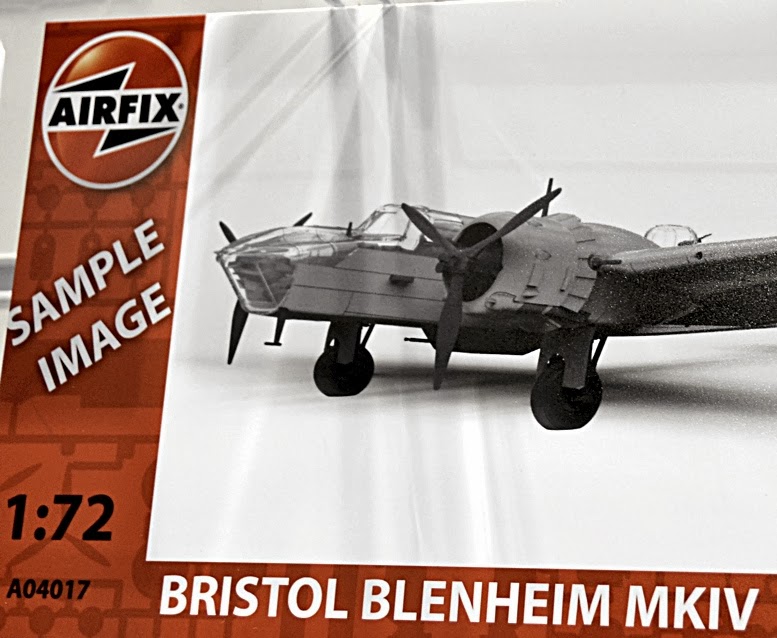 Also a new-tool replacement for an old Airfix kit, the Dornier Do-17 (below) to 1:72 scale. There will also be new-tool 1:72 scale kits for the venerable Hawker Hurricane Mk I, Messerschmitt Bf-109G-6, and Spitfire Mk IXc. Brand-new subjects will be from the jet age - a transonic Supermarine Swift FR 5 and Mach 2-plus English Electric Lightning F9, while in 1:48 scale, the Folland Gnat two-seater will come in both RAF trainer and Red Arrows air display versions. 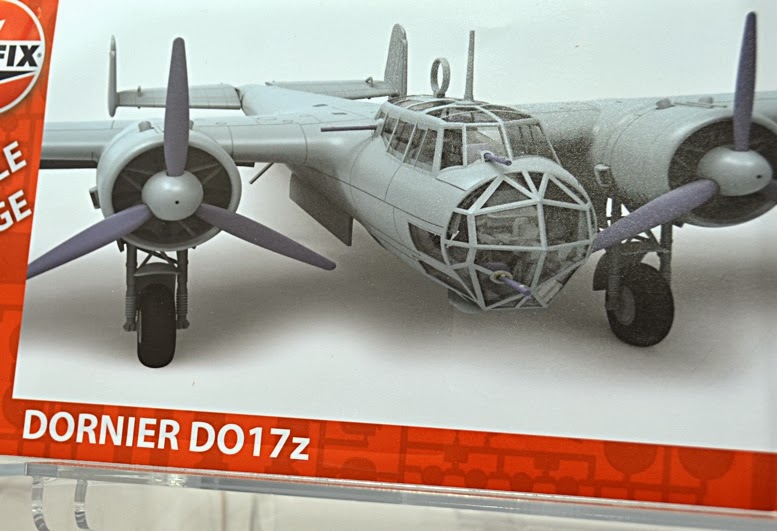 Sample box-art for the US Higgins Landing Craft, and Willys Jeep with six-pounder gun. The test shot for the latter sits in front here. 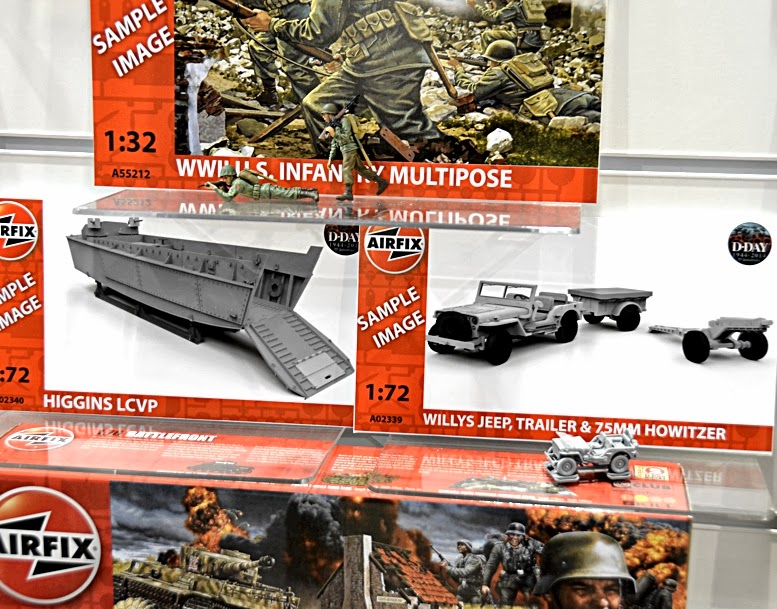 Many of the kits, including a number of new ones, will come as Airfix Starter Sets, complete with included paint and cement. 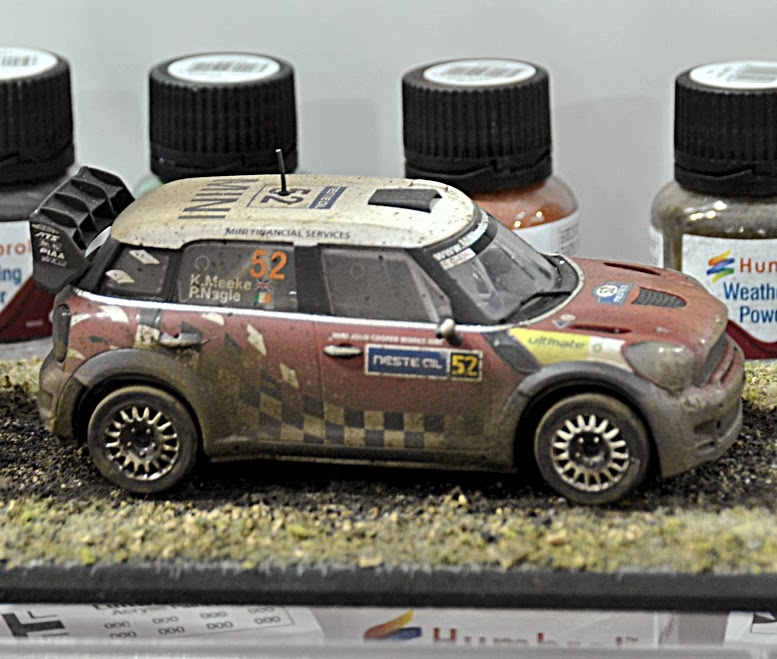 The Humbrol range of paint and accessories grows. Here, two sets of weathering powders have been used for the 1:32 scale BMW Mini Countryman rally car (above) with washes giving the 1:48 scale Supercat Coyote (below) a realistic finish. 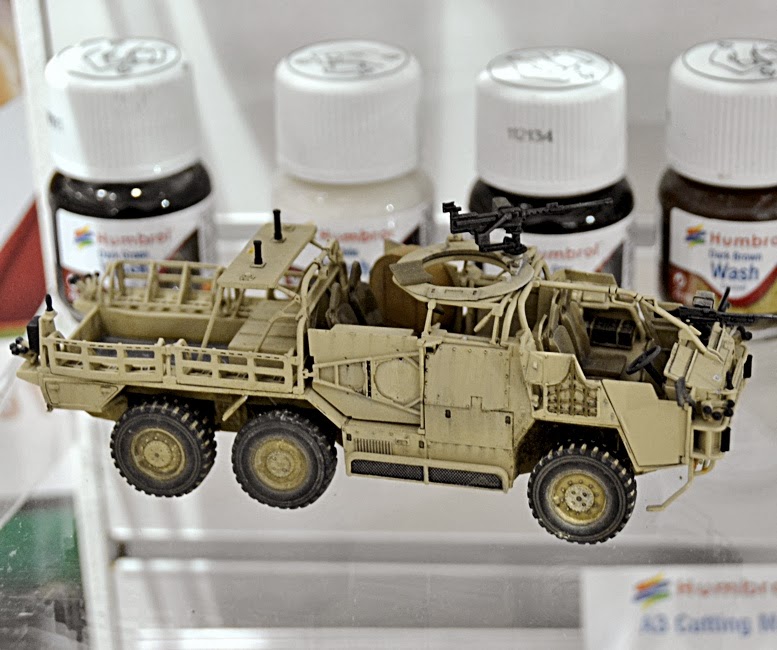 The Lamborghini Aventador is from Pocher, not exactly Airfix, instead being an Italian name acquired by the Hornby Group. The big, 1:8 scale car kit is packed with precise detail and multi-material components. 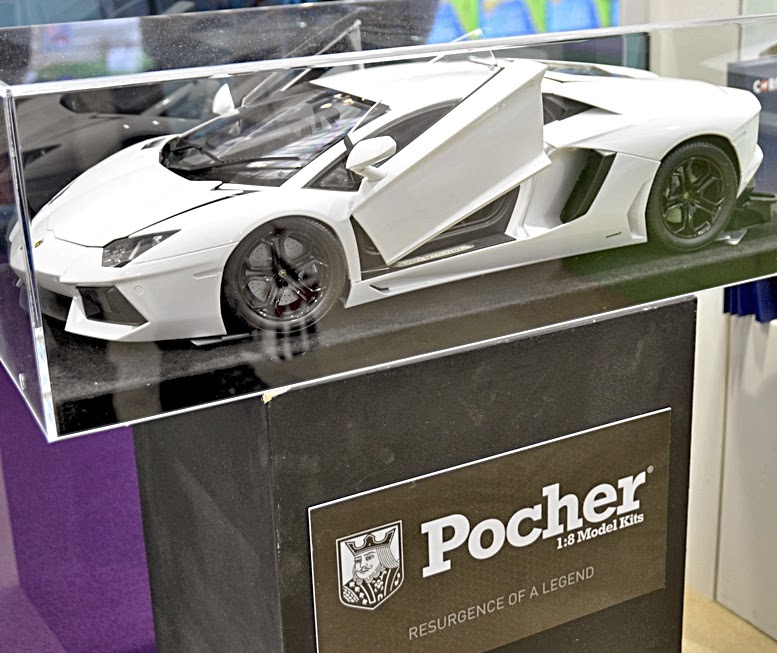 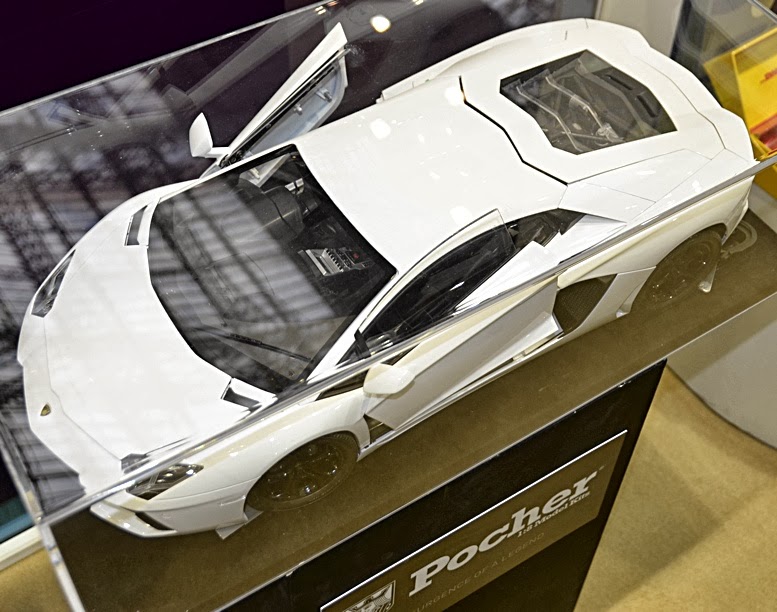