This 1:48 scale Glencoe kit is a reissue of an original Strombecker production dating back to 1958. It's a simple kit, and the moulding is not exactly up to modern standards. But it is accurate overall, and it is the only injection plastic X-1B to this scale - and a brand-new decal sheet is included, which really sets off the finished model.


Mat Irvine: At just 25 components, the parts-count is small, and the moulding in places very heavy, this especially applying especially to the undercarriage doors, which are way too thick for this scale. Although there is a clear cockpit canopy, there is no interior cockpit detail. This kit came from a time when the cockpit interior was usually ‘solid’ with a semblance of the pilot built in! But you can cut out this area, and even, if you feel so inclined, scratch-build a simple interior. 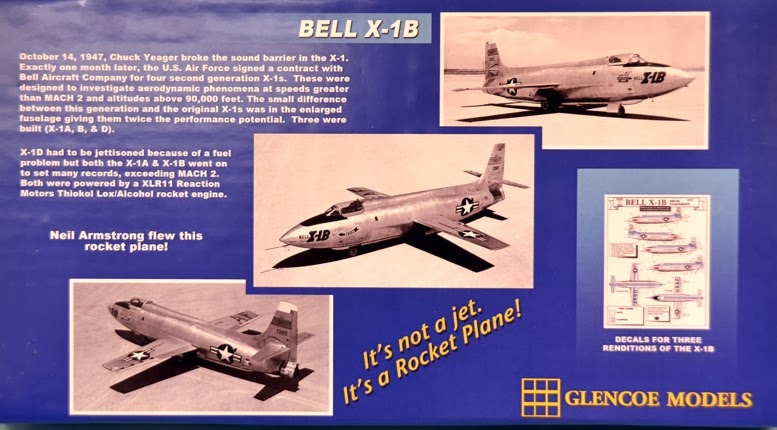 For the review kit, this was done and a seat was added from an Italeri F-117A Stealth Fighter. This is not correct - not least because the F-117 first flew decades later - but here the seat does the job in helping to provide a reasonably convincing cockpit interior. Glencoe’s decal sheet has an instrument panel included, so that provides another reason to do a bit of work in this area. 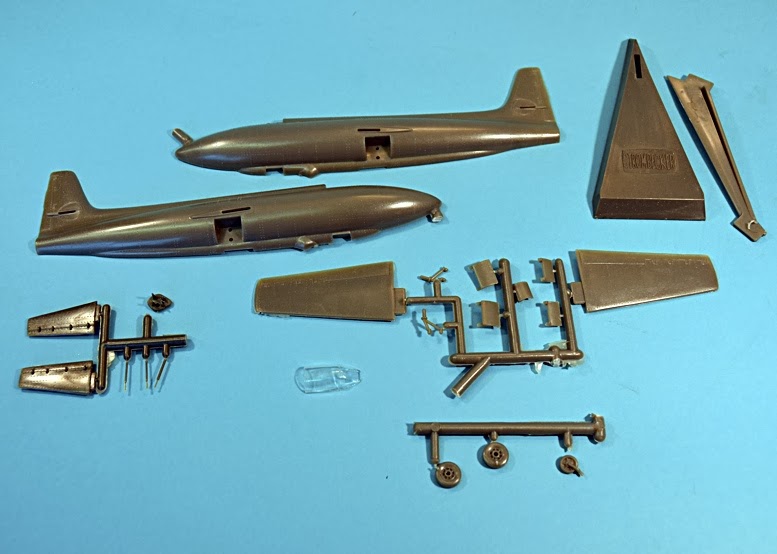 Parts layout (above) and note the stand base still has the Strombecker name engraved on it. Rivet detail is quite heavy, but a quick sand with fine wet’n’dry will reduce their prominence (below right) compared with the original at left. 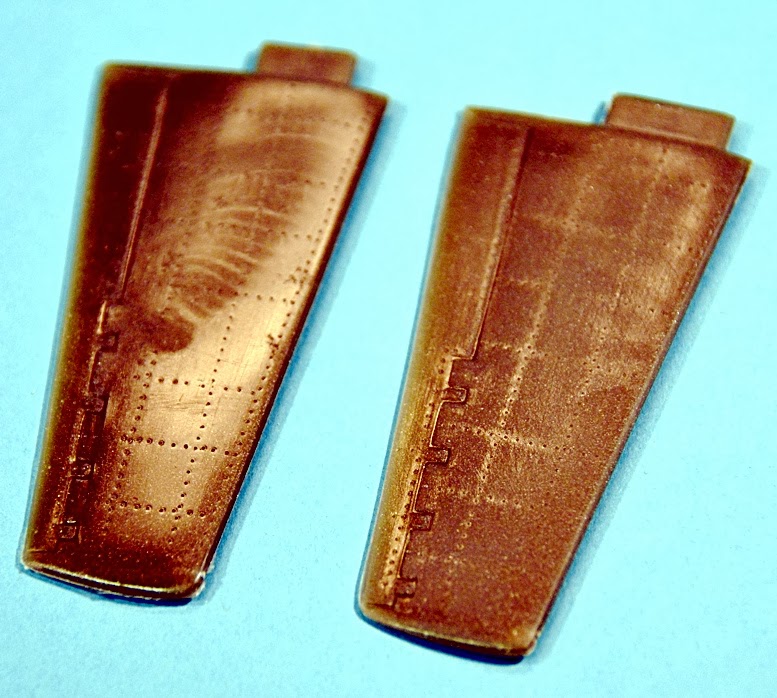 The kit’s wings are port and starboard one-piece items, instead of the more usual top and bottom halves. They are very thin, with only an 8 percent thickness/chord ratio, so are close to scale. Plus, even for this old kit, the tags and slots where they fit into the fuselage, are handed left and right, so they fit only on their correct sides. 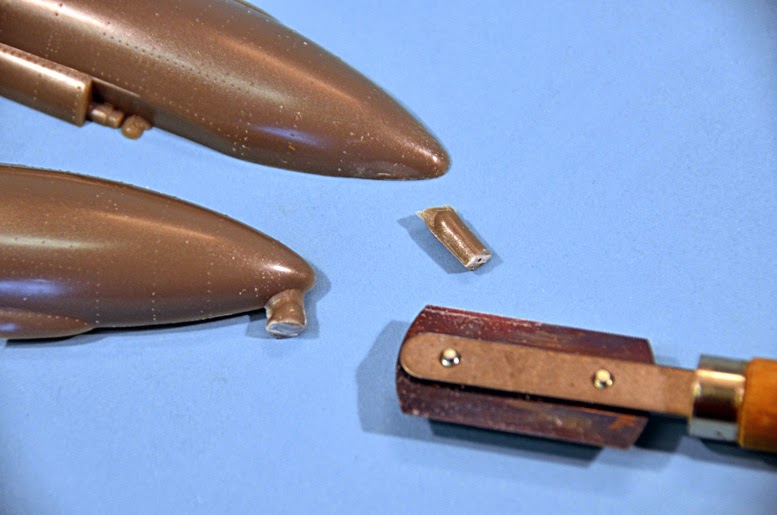 The kit has some very thick gates (above) where molten plastic flows through from the runners into the mould cavity, but a fine razor saw will deal with them. The ‘cockpit' (below) is little more than a blanking plate, but it can easily be removed.

I built a simple cockpit interior (below). The instrument decal is provided in the kit, the seat comes from an F-117A - not historically accurate, but it looks reasonably convincing. 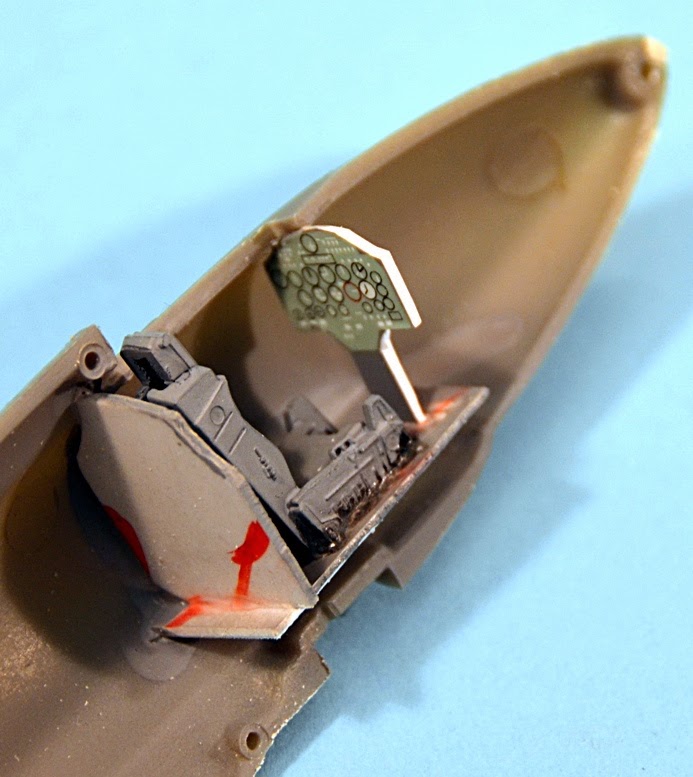 The three sensor tubes are finely moulded, though do need a bit of flash cleaning up from their edges. On the real thing, the tube for the nose was actually located underneath, whereas the kit has it directly on the tip, but the full-colour plans show the correct position, and it’s easy to fill the provided hole, and drill a new one. The provided hole for the nose sensor tube is in the wrong position. It is correctly shown (below) seen here re-drilled. The original hole can be filled. 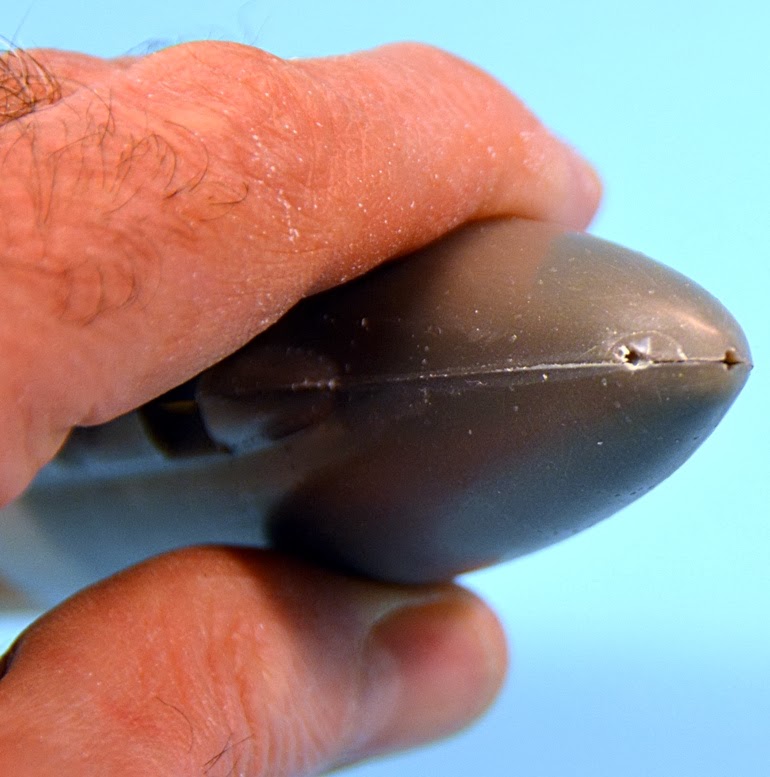 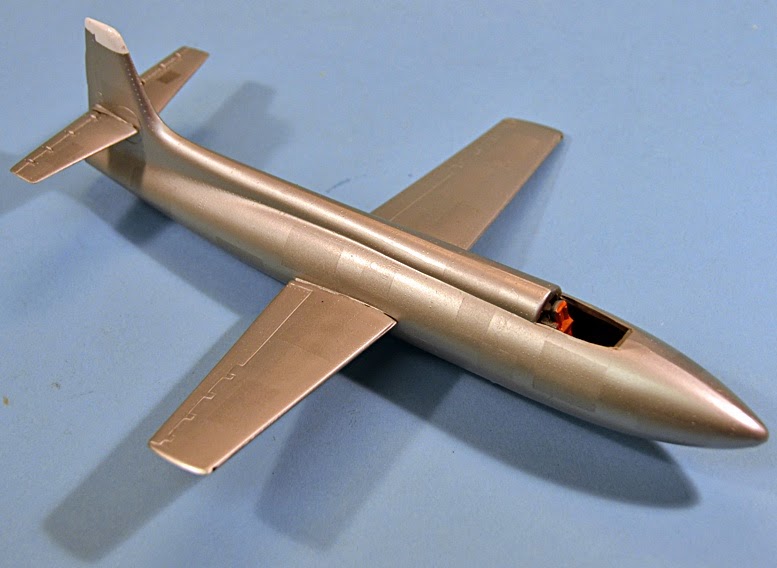 The basic X-1B, primed and painted with silver and aluminium. I covered panels with masking tape and sprayed over the top to give a ‘different materials’ look. 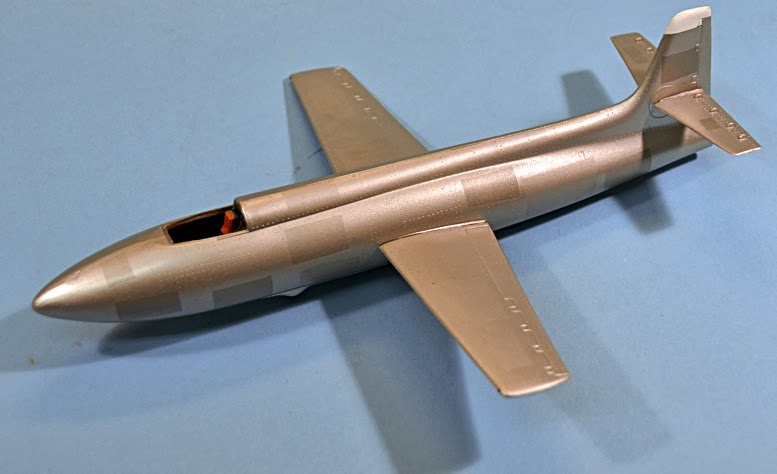 The decal sheet (below) provides a number of marking schemes, ranging from the original USAF markings, in which the X-1B was rolled out from the Bell factory, to NACA, the predecessor to NASA; and on to NASA itself. 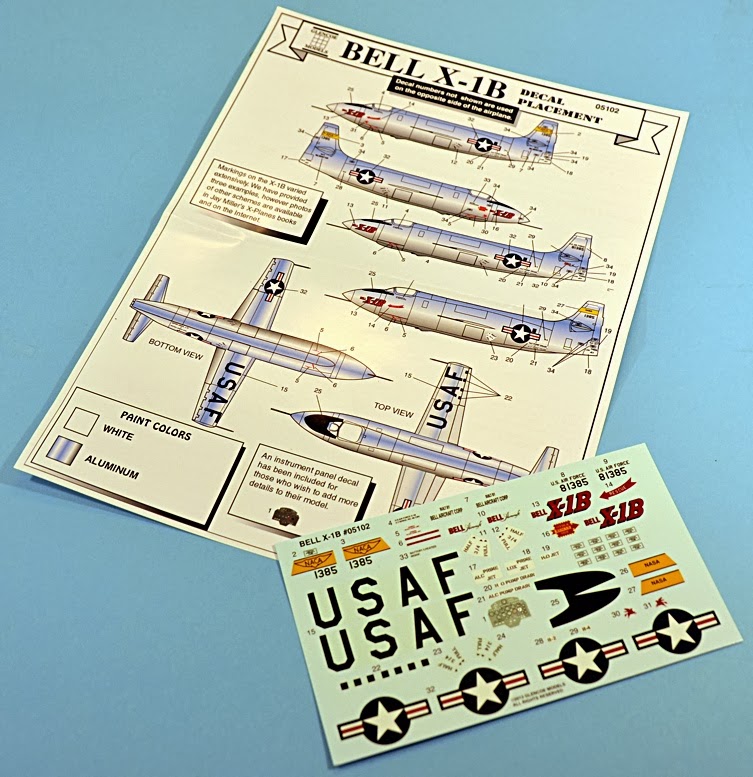 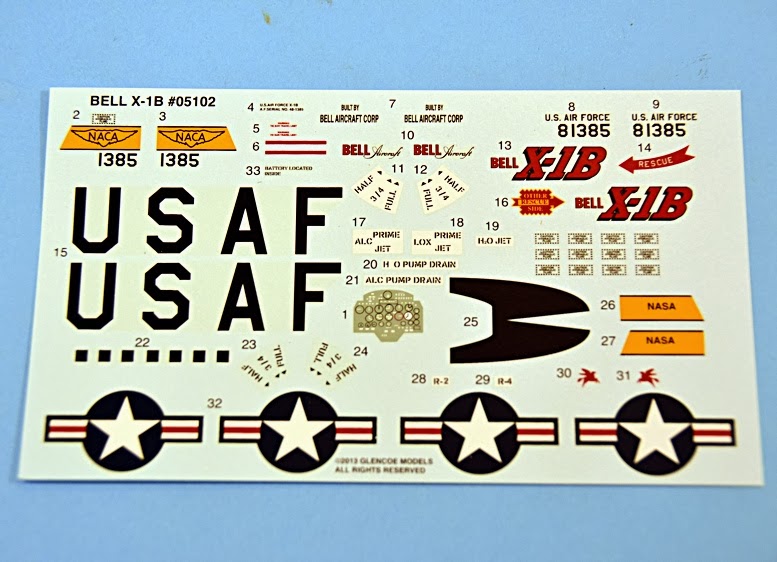 The completed X-1B (below) in bare-metal finish, mounted on the Strombecker stand. 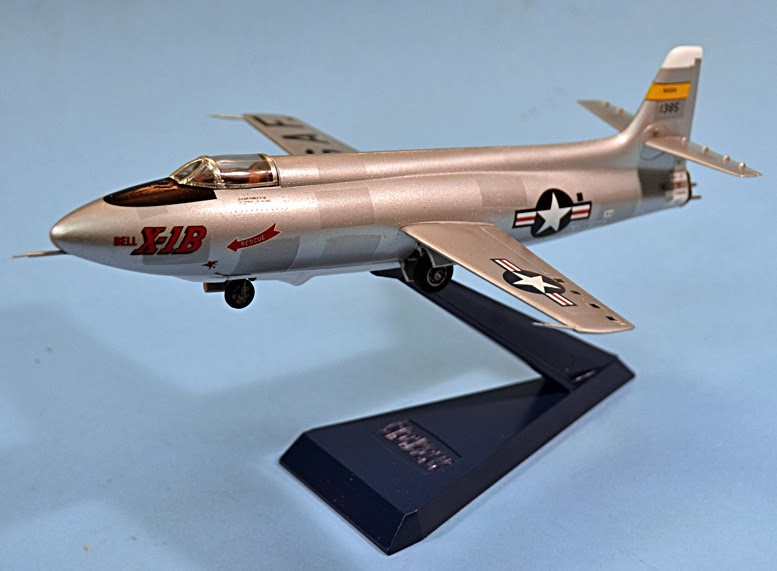 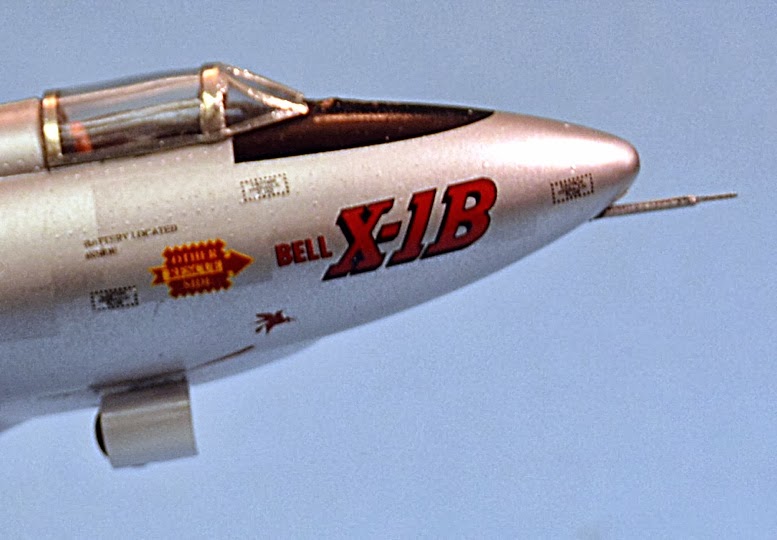 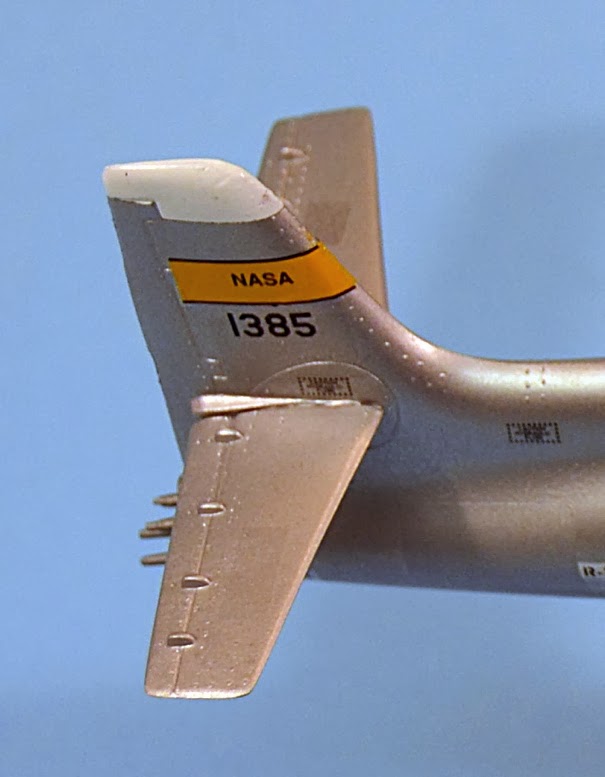 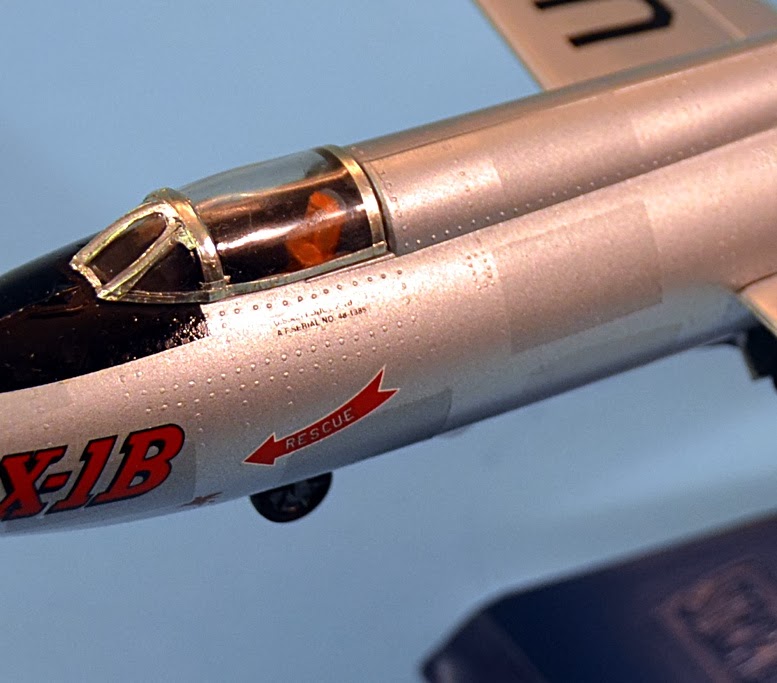 The X-1B’s colours vary, and although most of the time the rocketplane flew in natural metal finish, with white details on the fin-tip and under-fuselage sponson, it was possibly also rolled out in orange. The X-1A certainly was, as was the very first X-Plane, the Bell X-1. 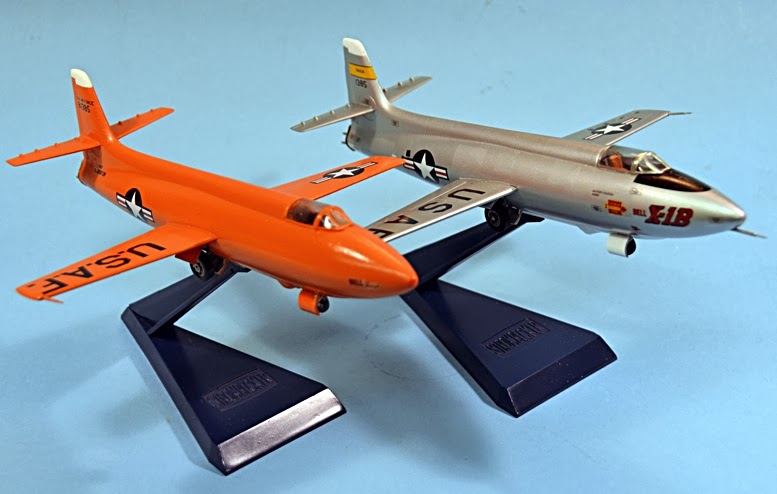 An all-orange finish was used on the Bell X-1 and X-1A. Perhaps the X-1B featured it at one point, as shown here. 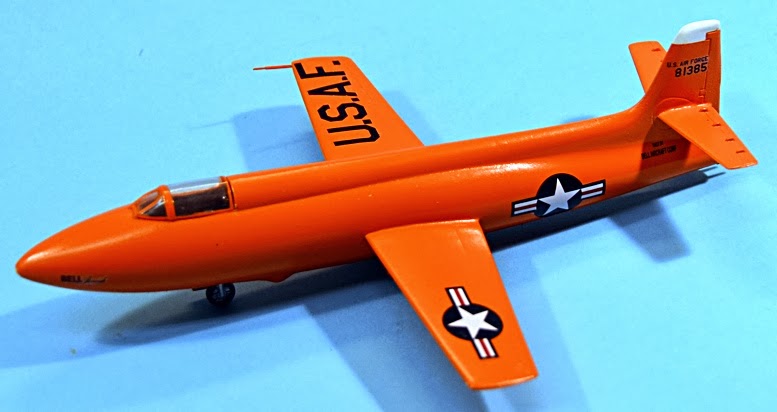 Four second-generation X-1 planes were planned, numbered X-1A through X-1D. However only three were built, the missing one being ‘C’, which would have been the most advanced. The X-1A was destroyed after it had to be jettisoned from the B-29 mothership following an explosion. A similar fate befell the X-1D, which contrary to its number, was the first of the second-generation to be completed and flown, though it made only one glide flight. 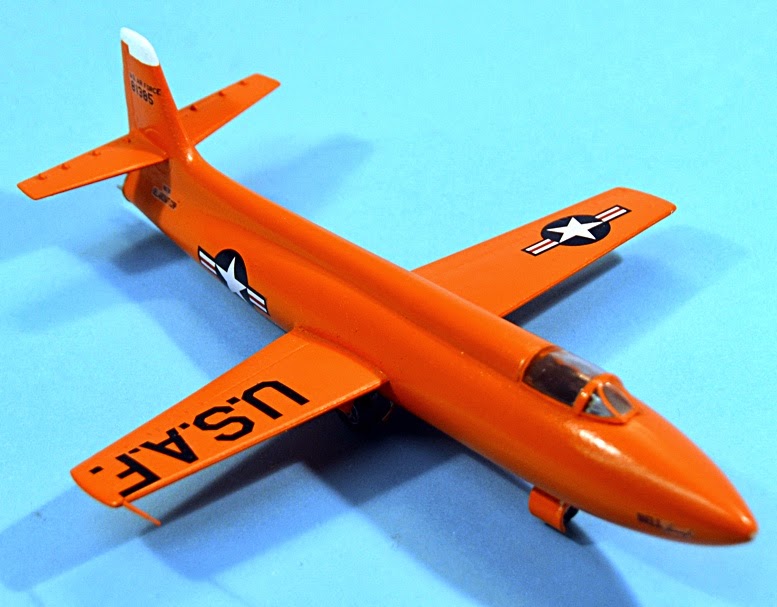 The explosions were caused by a reaction between liquid oxygen and chemical-impregnated gaskets, made from Ulmer leather. This was a factor unknown before it caused the loss of these two craft, plus two other X-Planes, the third original X-1 and the second X-2. 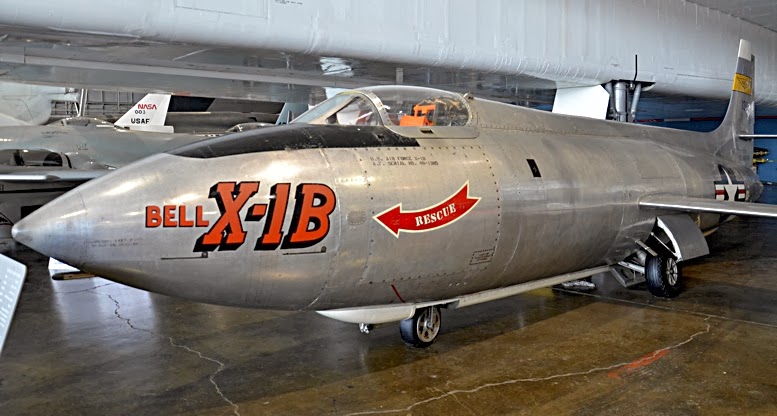 The single survivor today is the X-1B (above, below) on view in the USAF Museum, Dayton, Ohio. During the test programme, it completed 27 flights, both gliding and powered. 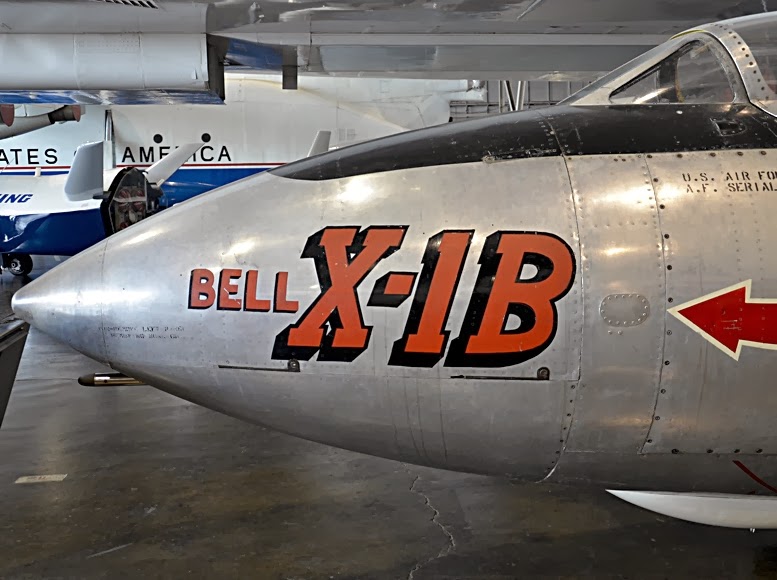 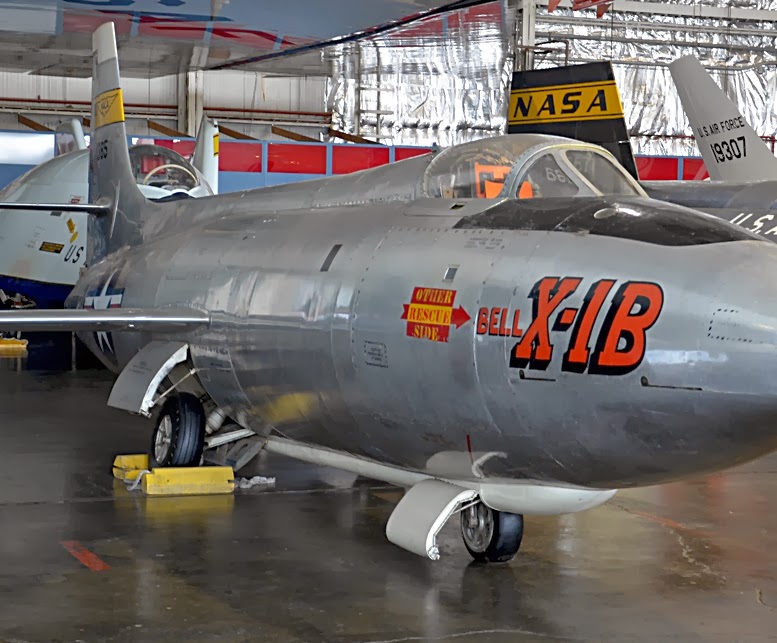 For full details, I can highly recommend The X-Planes X-1 to X-45 by Jay Miller (below). 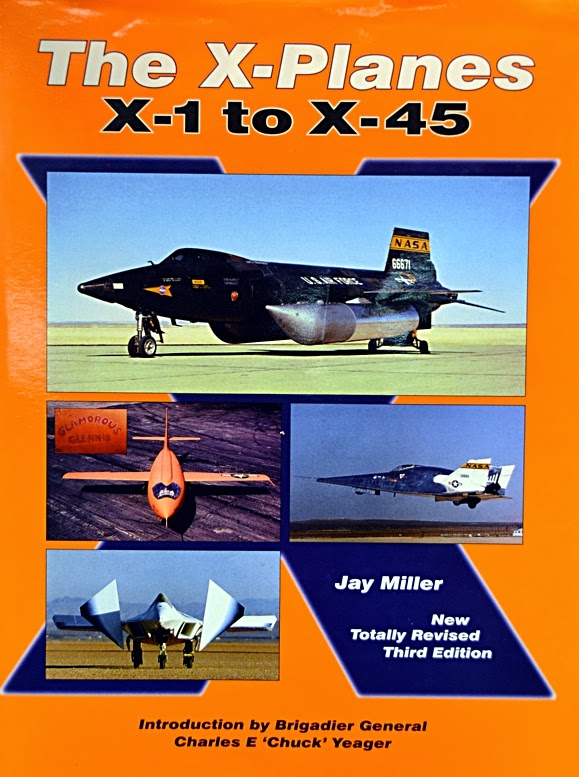 The third, and most recent, edition of Jay Miller’s excellent book goes up to the X-45, in real life, the series has now reached X-56. 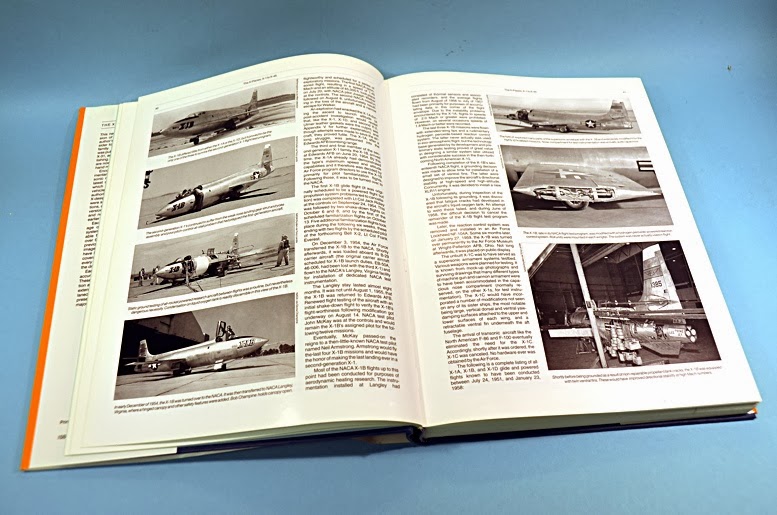 The colour page( below) shows the X-1A painted orange. Below this is a rare photo of the X-1A and X-1B together. 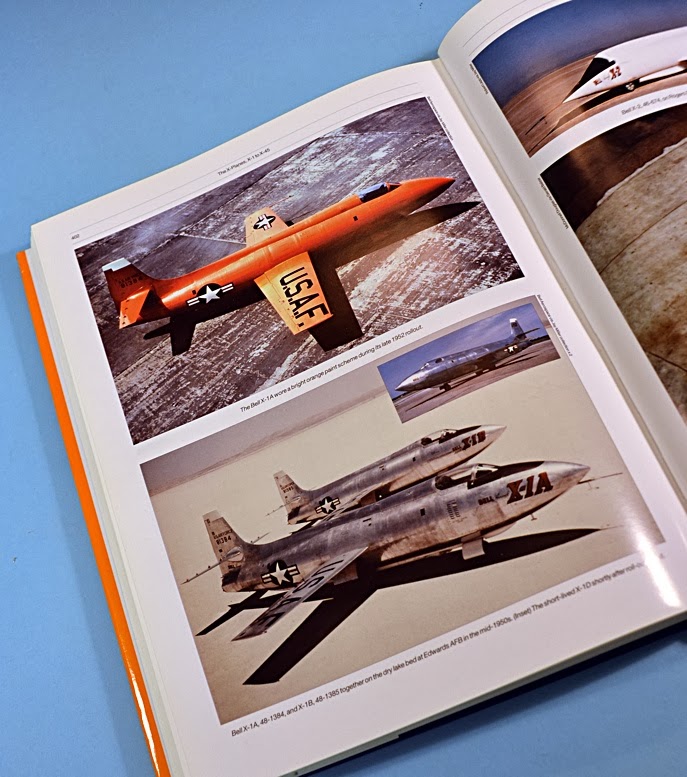