STEPHEN KING’S ‘CHRISTINE’ PLYMOUTH FURY: BACK FROM THE DEAD WITH THIS AMT REISSUE 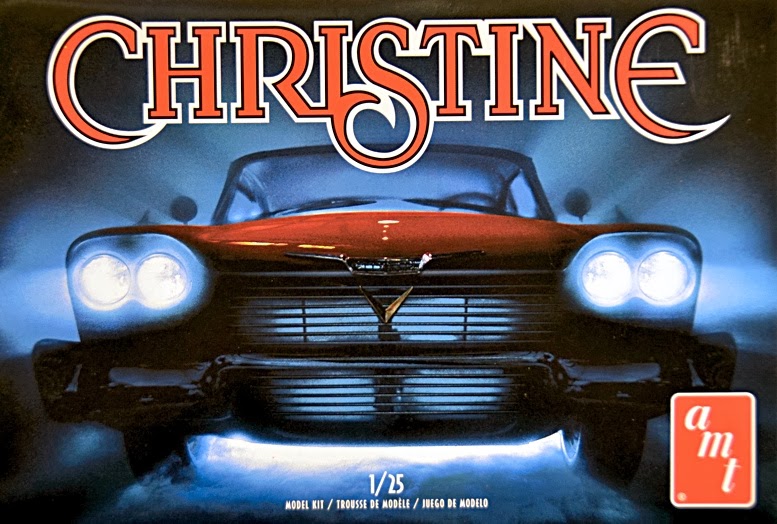 This Plymouth Fury kit is a reissue of AMT’s 1:25 scale 1958 Plymouth Belvedere, first released in 2002. This was a new-tool kit at that time, using modern features such a separate chassis and underside detail, unlike the classic ‘annual’ kits that had just started to be issued in 1958. These had a one-piece chassis with built-in detail such as axles, suspension and exhausts. 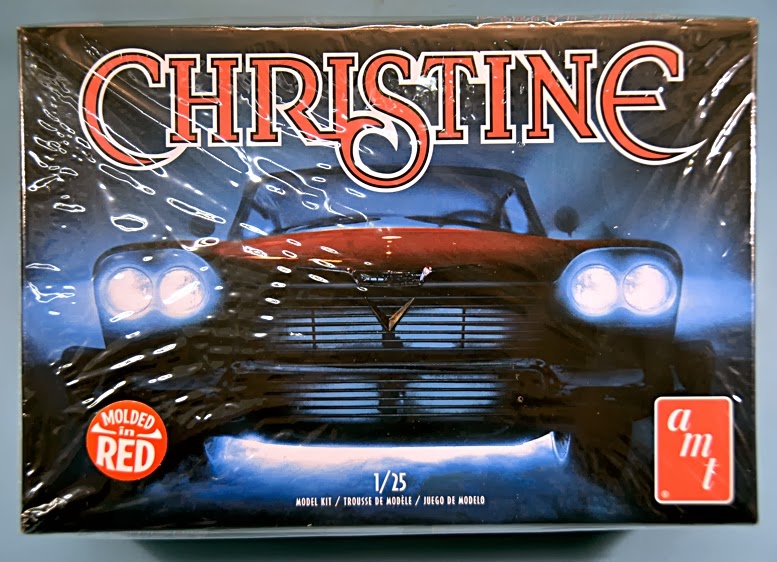 Mat Irvine: With this AMT reissue (above) showing the shrink-wrap with a small sticker to tell you the colour of the plastic, in this case, red.

In the box, you get a multi-piece interior with separate floor pan, side panels, plus front and rear seats. In the original annual kits, the interior would have been a one-piece ‘tub’, the sides and rear seat moulded in, and in many cases, the front seats as well. This set-up made painting more difficult than if the interior structure had separate parts, hence the new approach. This time round, there are also more details under the hood, such as separate breather pipes, fuel pump, and oil filler cap for the engine block. 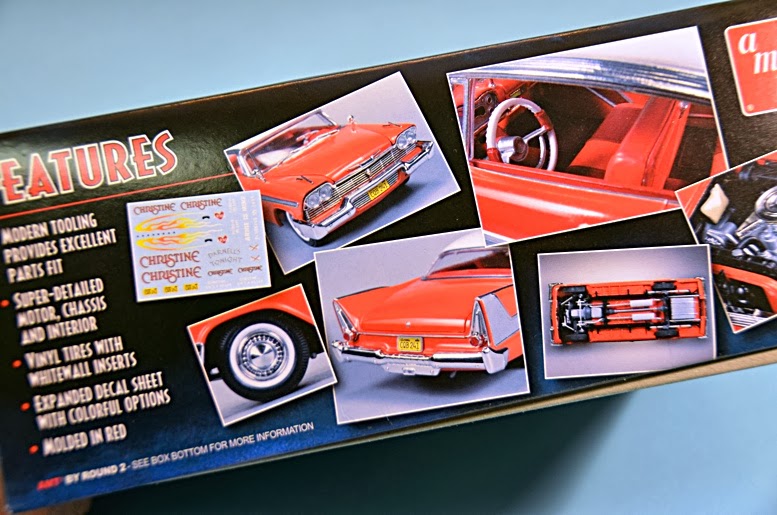 The underside has separate drivetrain and rear axle - the Plymouth Belvedere was still in the front-engine/rear-drive’ era after all - and separate exhaust pipes. The windows are also individual components all round, whereas in the early days, the ‘glass’ would have been moulded all in one. However, bodywork details remain much the same as a late 1950s or 1960s ‘annual’ kit. Such details, even in those early years, were already very good, with nameplates and trim all inscribed into the tooling.

Of the decals (below) only the license plate is really necessary, though oddly you get three of them. 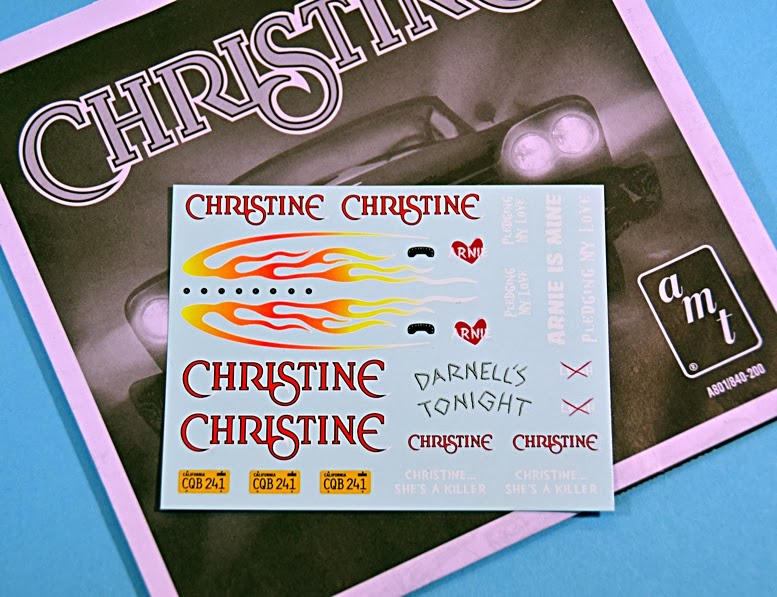 When first issued, the car was described purely a 1958 Plymouth Belvedere. Recently though, Round 2, owner of the AMT name, has started a ‘movie car’ range, so this kit represents the ‘star’ of the 1983 horror film Christine, directed by John Carpenter, and based on the book of the same name by Stephen King. Here the car really is ‘the star’, and both book and movie revolve totally around the demonic nature of this particular automobile.

Parts layout (below) is far more comprehensive that would have been if this kit was a 1958 annual kit. Note the separate interior side panels, and chassis frame at bottom left. 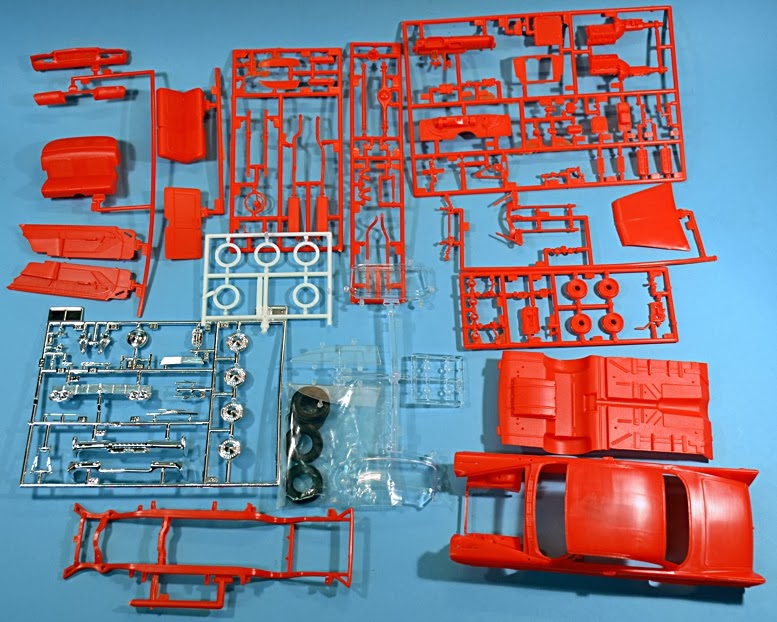 To this end the kit is available in two colours. One comes in standard white styrene, the other in red. Purists will prefer the former, as it gives a far better base on which to apply paint. But red is a starting point for this particular version if you don’t want to paint everything, though bear in mind that Christine’s roof is white, so that will need painting. 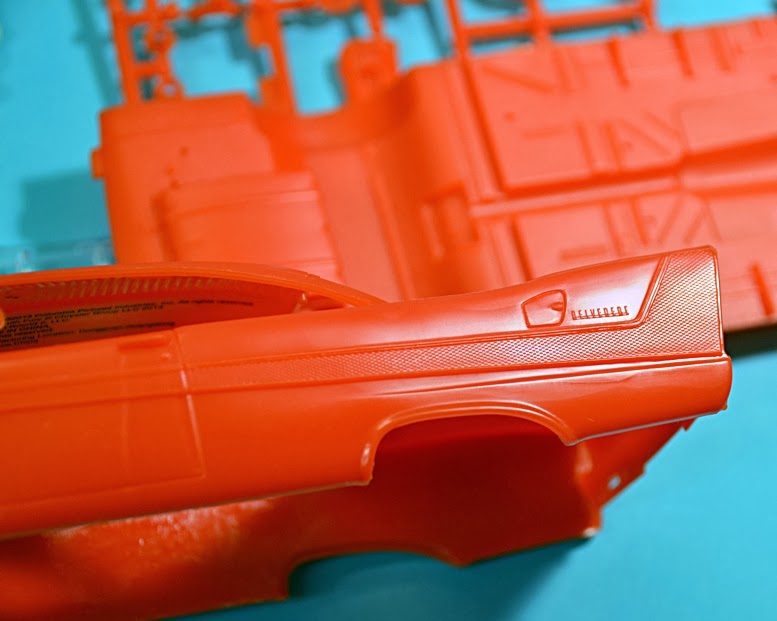 However, the red pigment used in polystyrene is extremely prone to ‘bleed’ through any paint, so to get a pure white roof on the red kit, you will need to prime the roof very, very, thoroughly. Ideally, spray first with a dense grey primer, maybe even black, followed by white primer, then gloss white top coat. You’ll need to do this to have any hope that the red pigment won’t bleed though and turn the roof pink.

The ‘Belvedere’ name (below) is inscribed on the rear quarter panel. Strictly speaking, it should be sanded off. 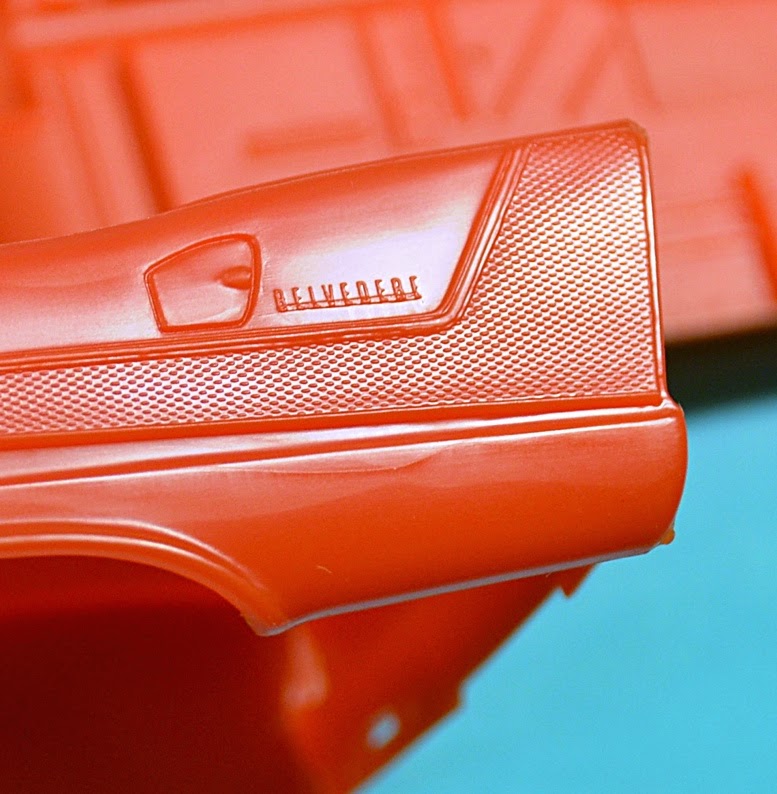 There has always been an argument as to exactly which version of the 1958 Plymouth, King’s Christine actually was. If we start with the description in his novel, it’s a, “1958 Plymouth Fury four-door”. Except that we have a slight problem, as for that year, the Fury was only ever available as a two-door, so we already have a discrepancy. Plus it is described as, “red and white”, but the real Fury was only available in cream, with a gold stripe. Also, the interior is described as, “red”, while the Fury only had a ‘buckskin beige’ interior.

The completed model (below). The roof, once suitably primed and painted gloss-white, was masked off, then red applied over the rest of the bodywork. 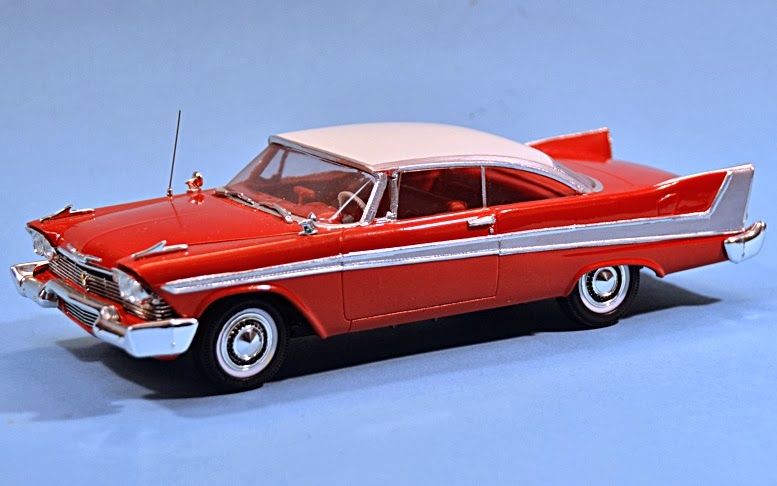 But Christine (below) is a work of fiction, so perhaps King could afford to be ‘creative’! In addition, Roland LeBay (George LeBay in the movie) the brother of Christine’s original owner, who eventually sells to the human hero, Arnie Cunningham, says in the opening chapters that the car was ordered as a ‘special edition’ in “red and white”, so that gets around that! 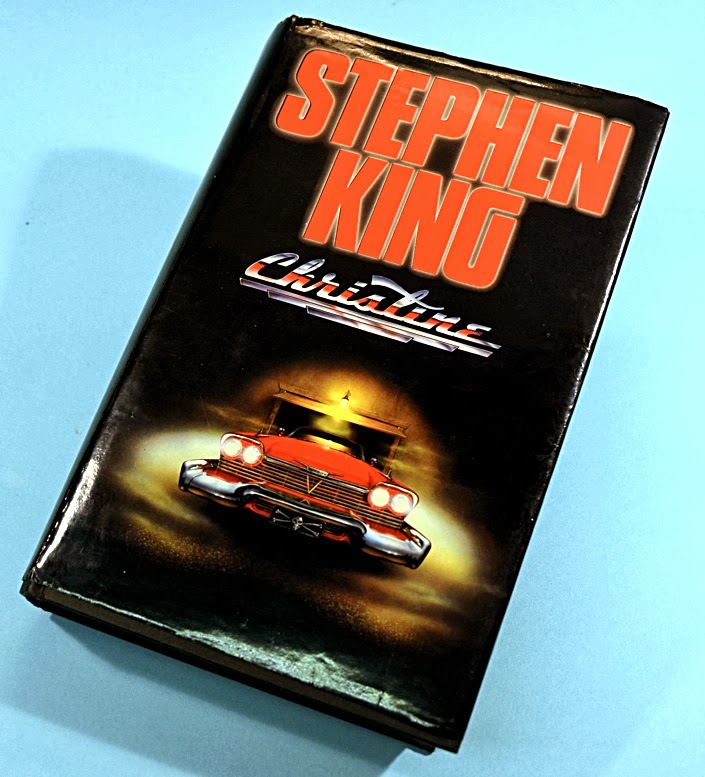 The original description actually better matches a 1958 Plymouth Belvedere, which was available as a four-door, available stock in red and white, and is the same overall bodystyle as the Fury. Indeed, the Fury at that point was a special sub-version of the Belvedere. But the name Fury sounds better (more demonic?) than Belvedere, so a Fury it became, and stayed that way. 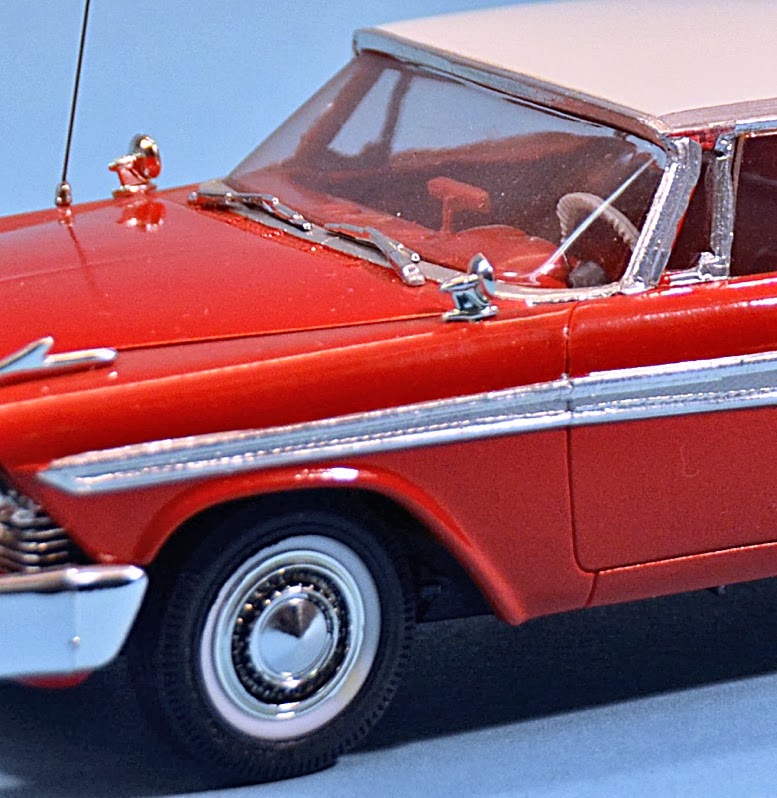 The kit AMT originally made was the two-door Belvedere, and this issue is still the Belvedere, though Round-2 has played safe and this time purely called the car a 1958 Plymouth. The Belvedere name is visible on the rear quarter panels, but it is easy enough to sand this off. Strictly speaking, there should be a Fury badge on the large anodised panel on the rear quarter panel, but it’s not very prominent. 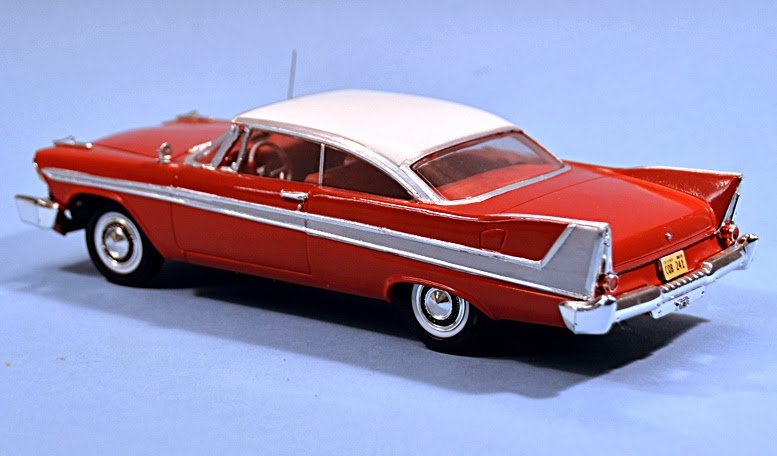 In reality, the movie used a number of cars to portray Christine, a mix of 1957 and 1958 years, including both Belvedere and Fury, and probably even the Savoy and Plaza variants. Sources do vary, but it seems that around 25 cars were employed in the making of the film - and 15 of them were wrecked in the process!

Thanks to Round 2 Models for the review kit 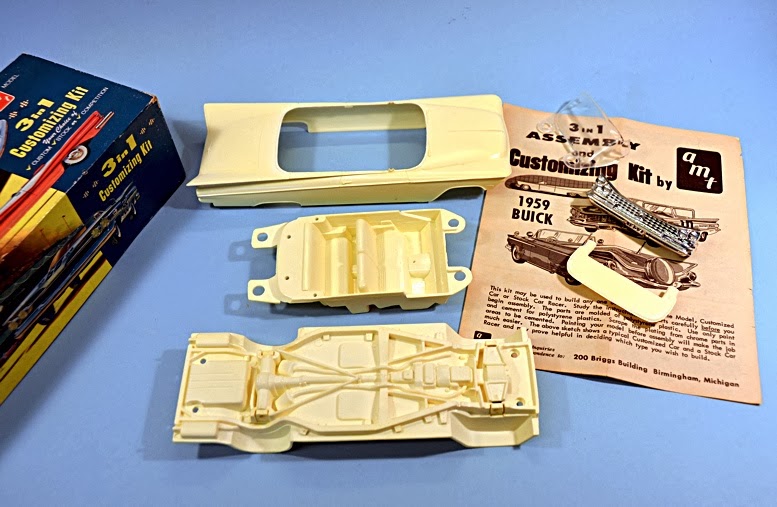 As a comparison (above) an AMT 1959 annual kit, actually a Buick. It shows the one-piece interior tub and one-piece chassis. 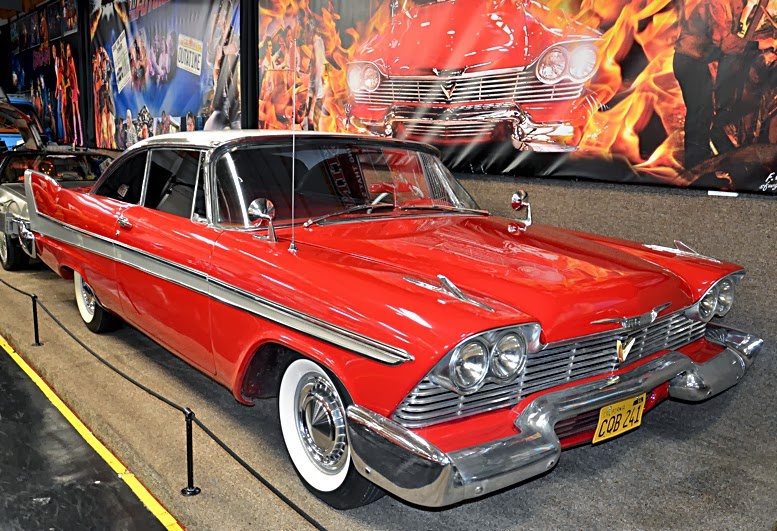 A Christine car at the Volo Auto Museum, Illinois (above, below). This almost certainly isn’t one of the actual movie cars, and is probably a Belvedere, less the nameplate. It does, however, have the correct licence plates. 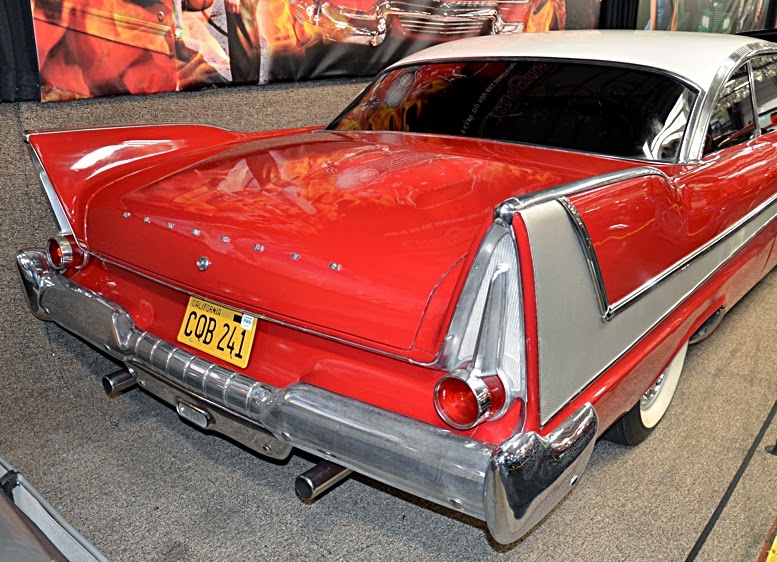