ANOTHER BLAST FROM THE PAST: ROUND 2 RE-RELEASE SOVIET-ERA VOSTOK SPACE LAUNCHER TO 1:100 SCALE

This is a 1:100 scale model of the classic Soviet A-Type launcher in its best-known Vostok version, as used to launch Yuri Gagarin, the first man in space, on April 4, 1961. This time, the MPC kit comes as a Round 2 re-release.


The kit was first issued by MPC way back in 1970, when details of the launch rocket were still relatively new in the West. The design, featuring four tapered strap-on boosters, looked distinctly odd then, especially compared to cylindrical Western launchers. However, the design is now highly familiar - the basic rocket is still used to launch Soyuz and Progress craft to the ISS (International Space Station) and now also by ESA (European Space Agency) as one of its main launchers.

The new box (header pic) has a 'Made in USA' label, a sign that at least some kit manufacturing is returning from the Far East. The name ‘Sharik’ (Russian: 'little sphere') is printed under the Vostok title, though this really refers only to the single-seat spherical descent section contained in the nose. As is now common with many Round 2 issues, the bottom of the box (below) is packed with information.

The 1:100 scale kit is moulded mostly in white styrene. Some parts are chrome-plated, and there are three clear components. The model can be built not only as a Vostok launcher, but also as the launcher for earlier, uncrewed craft, in this case Sputnik 2. However, more of that later. 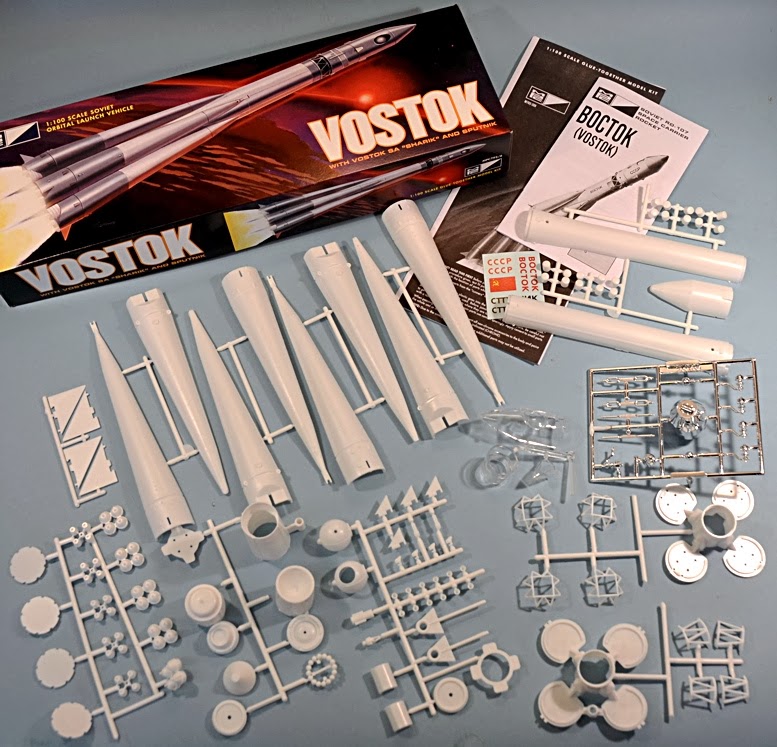 The MPC model features separate details for the first stage and booster rocket engines, in that the base plate can be removed to show details. Unlike early US launchers, which usually had a small number of large engines, Soviet designers took the opposite view, and used a large number of smaller engines. So whereas the Saturn V Moon rocket had five massive F-1 engines for the first stage, the A-Type has twenty in all, four in each booster plus four more in the central core. All those, plus a dozen smaller sustainer engines.

The paperwork includes new instructions, but the booklet and decals are reproductions from the original kit. 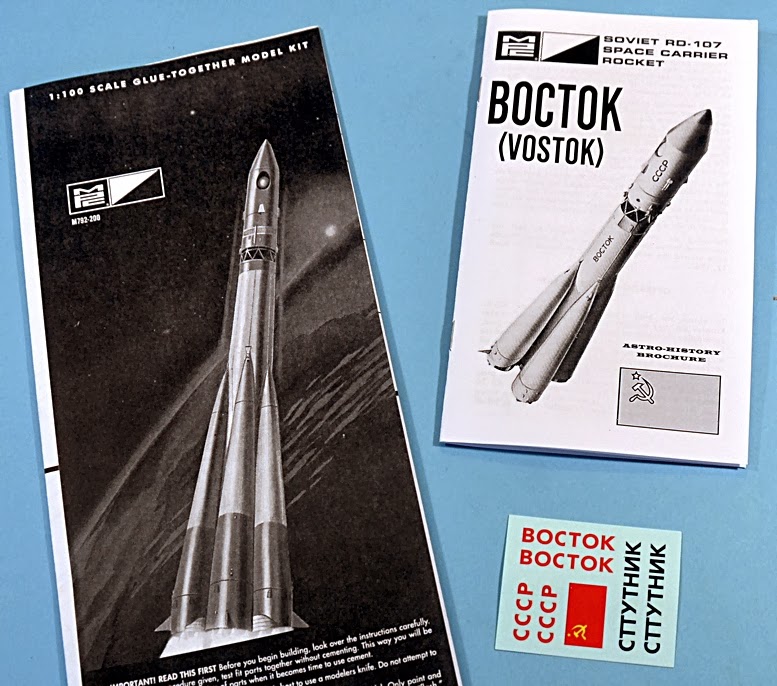 The odd inclusion of a chrome-plated runner (below) is possibly explained by MPC’s primary automotive output, for which chrome parts were (and are) essential. 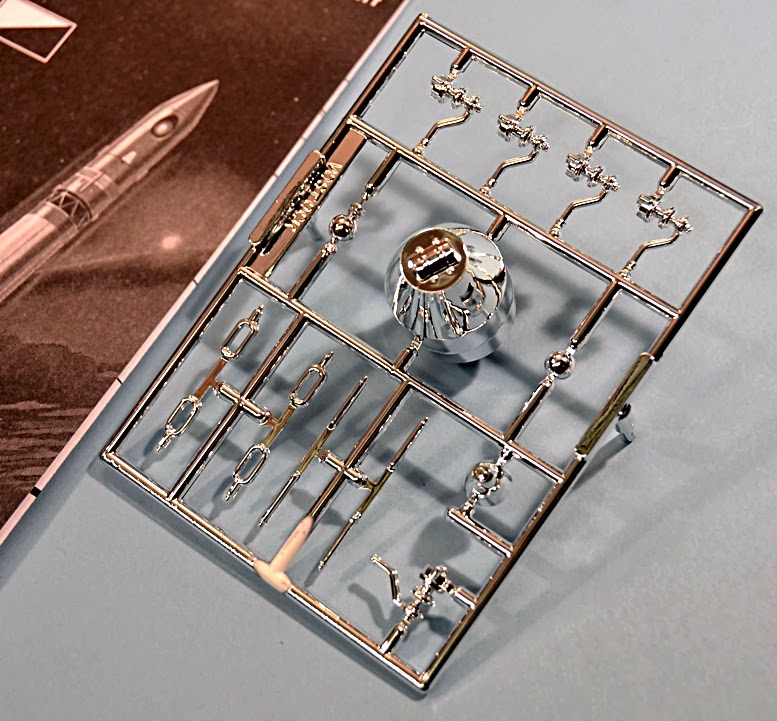 The MPC Vostok has a scale cosmonaut who can sit in the ejection seat, positioned inside the spherical section (below). Under that is the equipment module and retro-rocket pack, both sitting in the final stage, which sits atop an open truss interstage arrangement. Here, the truss is formed from four components that need a bit of juggling to get them to sit correctly, as both top and bottom surfaces have to be square-on. 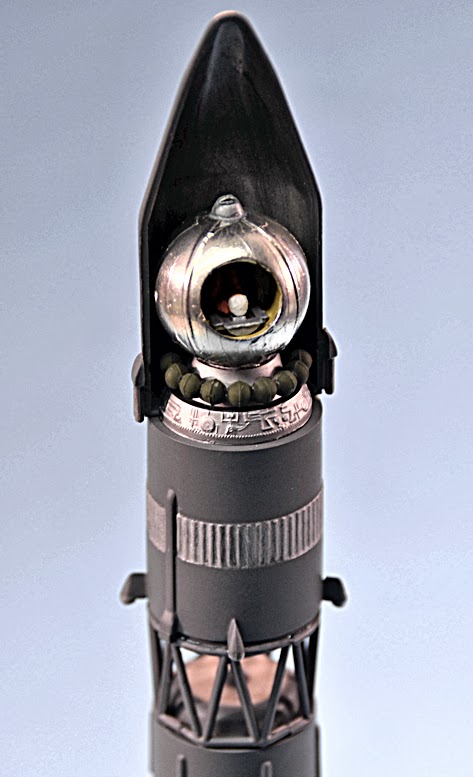 The parts (below) are not needed, as they are left over from the original MPC ‘flying’ option. The large fins, simplified engine plate, and odd ‘key-shaped’ components are seen at left. 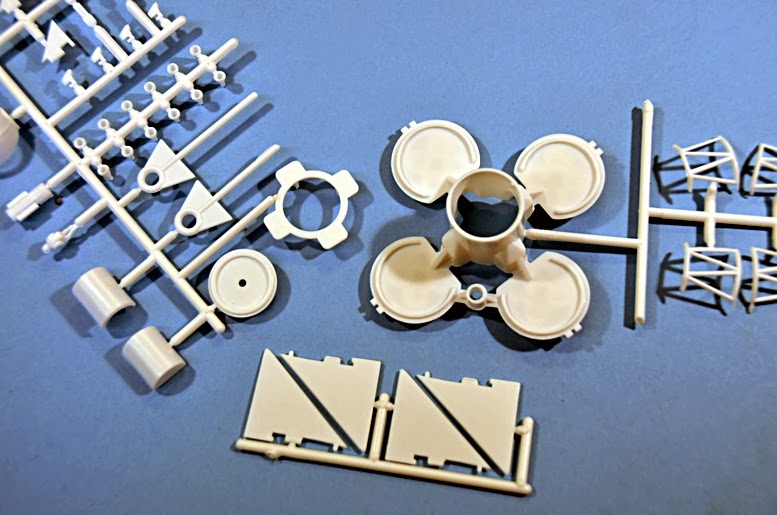 As the truss is somewhat flimsy, especially for a flying version, MPC provided a clear part that sat inside, firmly connecting the lower edge of the upper stage with the main centre core. This is still in the kit, so you can choose to use it or not, though with a static model it is not really necessary.

A transparent part also forms one half of the upper fairing shroud. This can be left clear, or painted mid-grey to match the main rocket body.

The original MPC kit, as issued in 1970 (below). Note the title, ‘Russian Vostok RD-107’. The box emphasises the build to fly option, now mostly omitted. The text at top right, ‘First time ever to be in scale model kit’ (sic), is incorrect. Apart from the slightly dubious English, Airfix beat MPC to the market by one year. 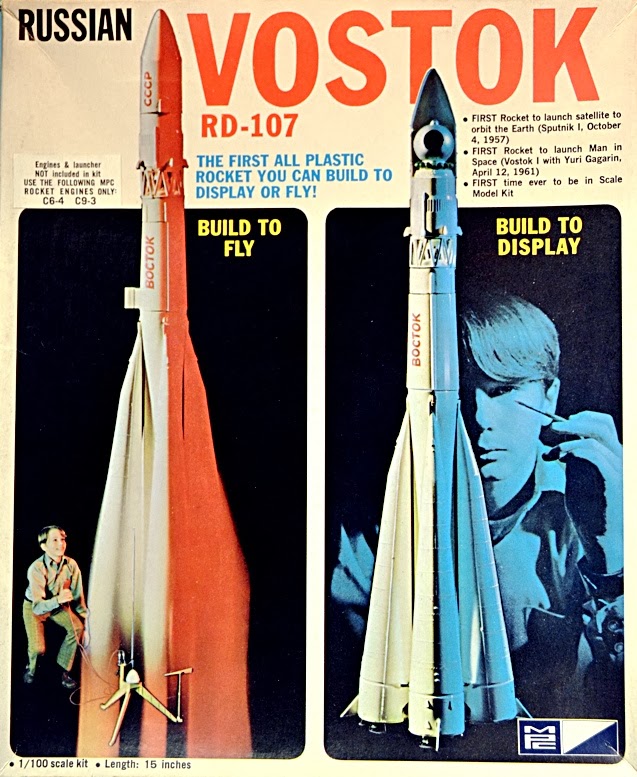 This should not be in the earlier white scheme that all Vostok models used when it was assumed that white was correct. Display replicas were painted white (many still are) and the ‘white’ seen in launch photos was actually frost, formed by low temperature cryogenic fuels inside the casing.

I have a slight connection with this kit as I advised Round 2 on up-to-date rocket details, including the colour scheme.

White display versions usually have red CCCP and Vostok (or rather the Cyrillic ‘BOCTOK’) markings, and the kit supplies decals for these, should you wish to go down this route. Grey-finish flight versions have no prominent markings. 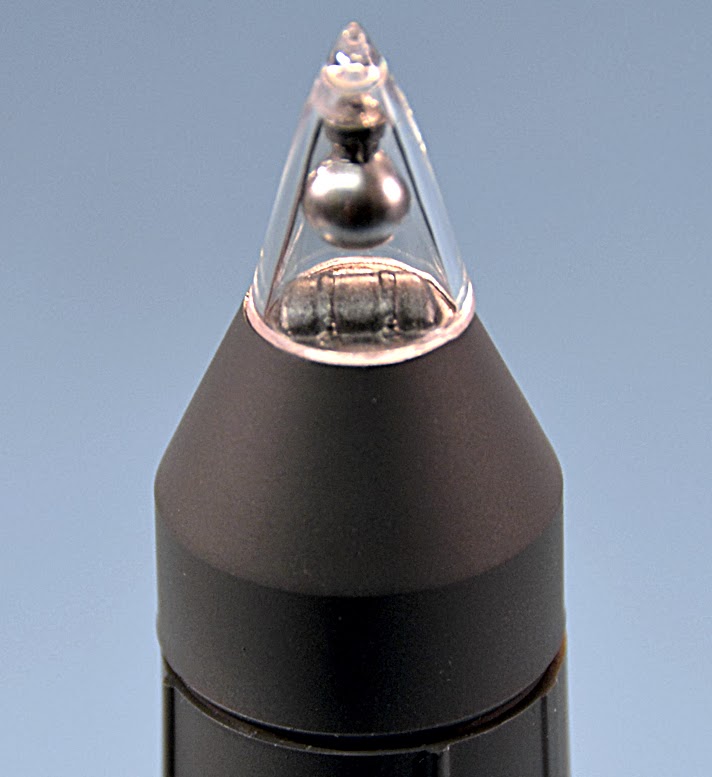 The optional payload was originally termed Sputnik 1, which was wrong, as the fairing was the wrong shape - Sputnik 1's fairing was a simple cone. Overall, the double-cone shape in the kit is closer to Sputnik 2, though the angles are still incorrect. However, the satellite itself - visible under the clear section of fairing - is reasonably close to Sputnik 2, the lower horizontal cylindrical moulding being the pressurised container for the dog, Laika. 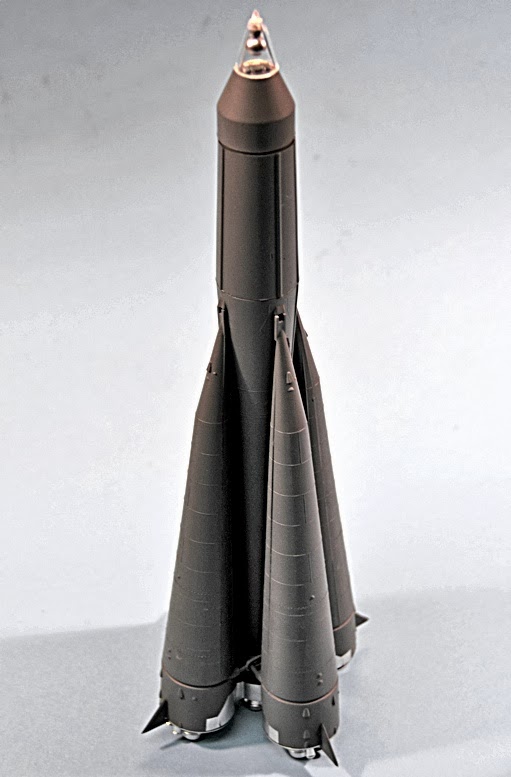 The central core and booster ends (below) should be painted bright silver. 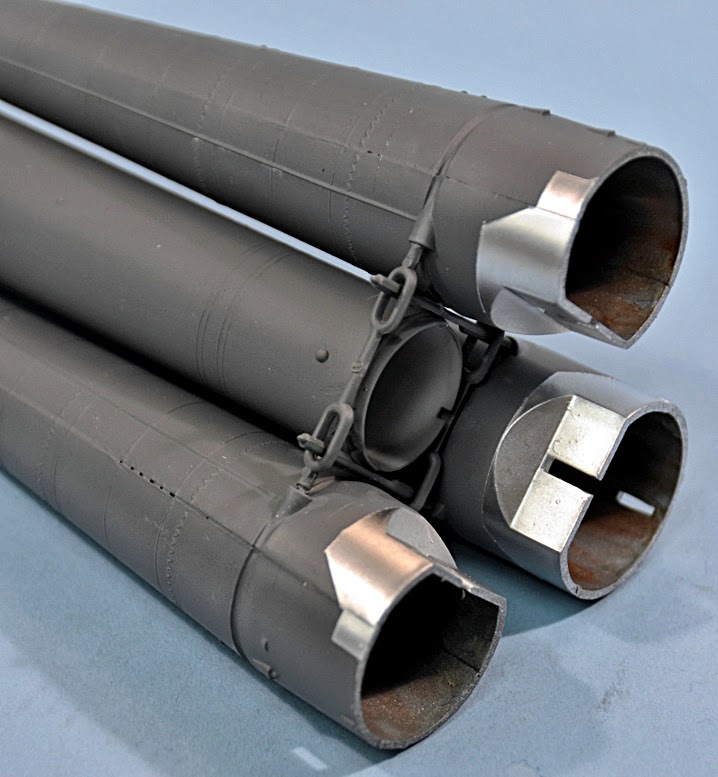 Rocket engine details inside the base plate (below). The outer booster engines are RD-107s, the inner central ones, RD-108. 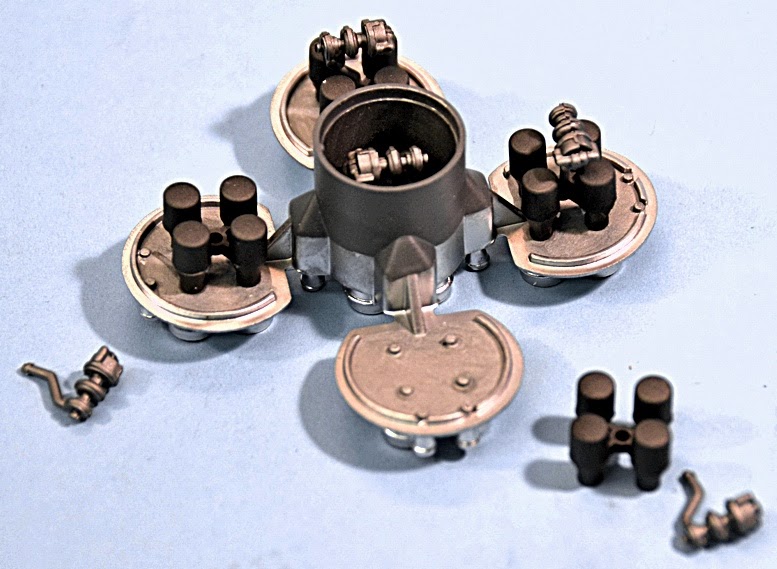 The assembled business (below). Note the dark copper-red inner surfaces of the engine bells. 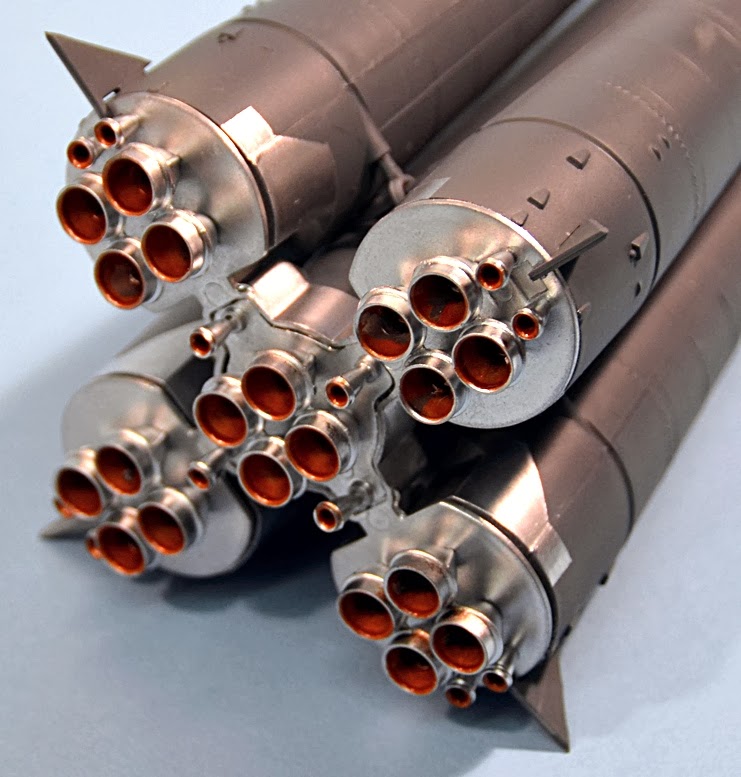 Summation
Basically a decent kit of this Soviet-era space launcher, and the only injection kit to 1:100 scale, usefully larger than the 1:144 scale Airfix version.

Thanks to Round 2 for the review kit, available in stores soon.

More background details
Back to the briefly mentioned optional version. This was billed in the original MPC kit as Sputnik 1, the world’s first artificial satellite, launched in 1957. In fact, details at the time were scarce, and the MPC model more closely resembles Sputnik 2, the satellite that carried the first dog, Laika, into space. The shape of the fairing for this was a double-cone, but here it isn’t entirely correct. It is indeed a double-cone but it goes from the base, ‘in’, then ‘out’ - the reverse of the real thing. But the transparent top fairing does, just about, show the structure in which Laika was housed.

The completed rocket (below) with Vostok payload in place. 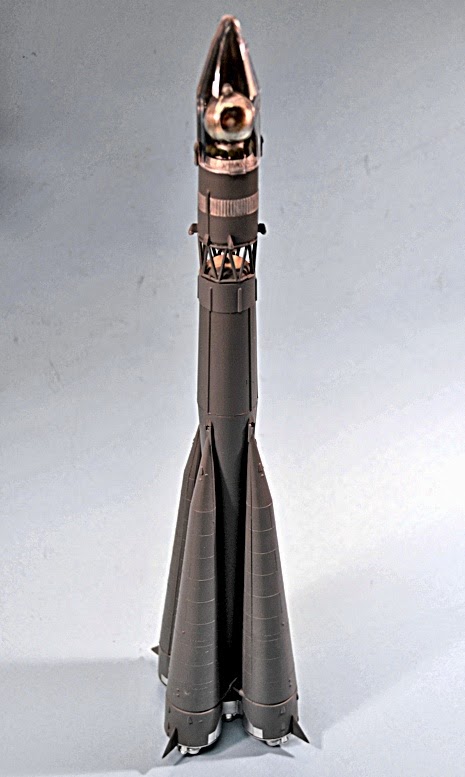 There is also the slight oddity of a chrome-plated runner. This is unusual for a rocket model, but perhaps normal for MPC, a model car company first and foremost. Actually, a couple of parts - especially the spherical satellite section of Sputnik 2 - are quite useful in chrome. The other components you can paint as per the rest of the rocket.

The initial Round 2 plan was to re-use the original box-art, but the idea had three major problems. First, the rocket was depicted in white, not grey. Second, the box emphasised the flying option. Third, Sputnik 1 was mentioned. Consequently, Round 2 decided to produce new box-art, and in fact the kit ended up with a completely different box size and shape.

Completed model (below) finished in the correct mid-grey finish. 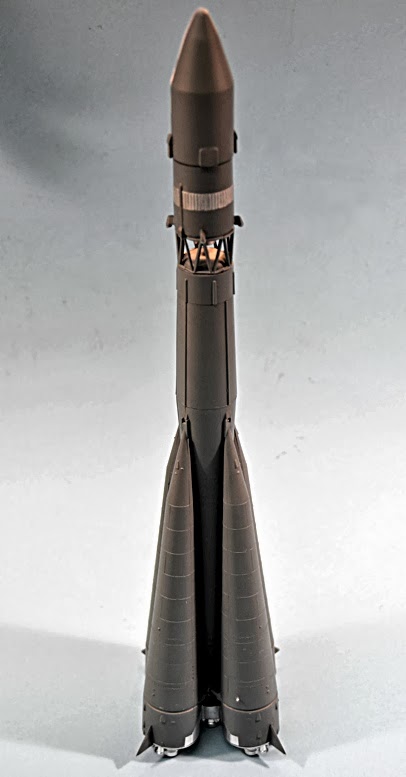 Another change that could be made from first time around, was to modify the kit’s name. When the kit was first issued it was actually titled, ‘Russian Vostok RD-107’. Putting aside that, for the time period, it should correctly be ‘Soviet Vostok’, the use of RD-107 is rather odd, as it is the name of the Vostok booster engine. Why MPC chose to use this terminology is unclear, as it was the equivalent of calling an Apollo launcher as ‘American Saturn V F-1’, F-1 being the Saturn’s first-stage motor. Odder still, why single out the RD-107? The main engines are RD-108s, so why didn’t they get a credit as well? Unfortunately, this is one model mystery almost certainly lost in the mists of time. 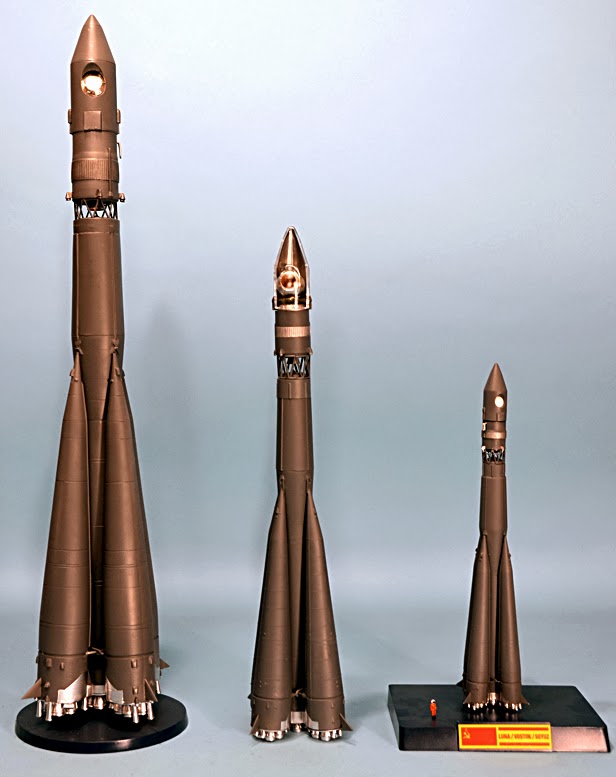 Flying model rocket
Many companies have made flying scale rockets, the best-known name being Estes, many kits of which can also make very presentable static models, so long as parachutes and engine tubes remain carefully hidden out of sight. What made the MPC Vostok - and its companion Titan IIIC kit - unusual is that they were the other way round - they were primarily static kits, but ones that could also be adapted to fly, though whether any survived such a launch is unknown.

The actual flying paraphernalia, such as parachute, card tubes to hold the rocket motor, and weights to get the balance correct, were included in the original MPC issue. This Round 2 re-release omits these, but several styrene parts remain in the kit, such as larger fins, and simplified structures for other sections.

These are still on the runners, although the plans do not mention them. All you need to do is omit them from the build, and put them to one side - more stuff for the ‘bits and pieces’ box!