LEONARDO’S MARVELLOUS MACHINES: FLAPPING-WING ORNITHOPTER FROM ITALERI, AS DESIGNED BY THE RENAISSANCE INVENTOR AND PAINTER 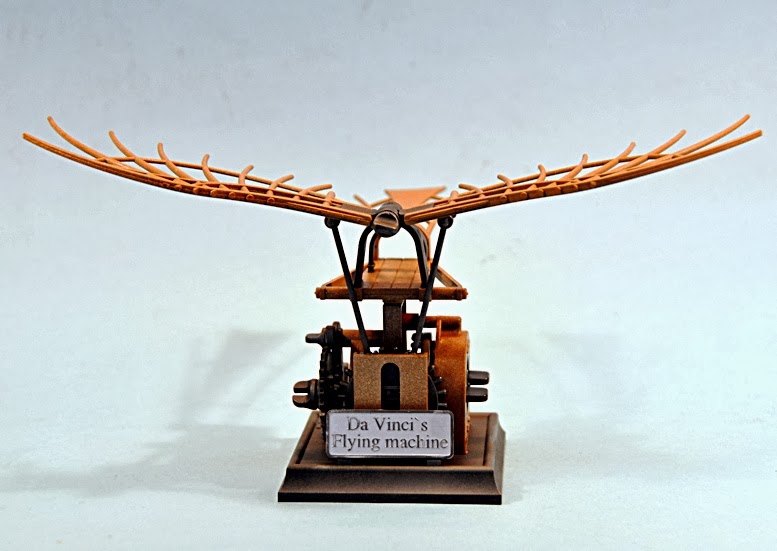 This is one of the second batch of Leonardo creations, originated by Academy in South Korea, then repackaged for the European market by Italeri.


Mat Irvine: The human-powered ornithopter is one of Leonard da Vinci’s best known concepts, a predecessor to the aeroplane, though designed with flapping wings like a bird or a bat. 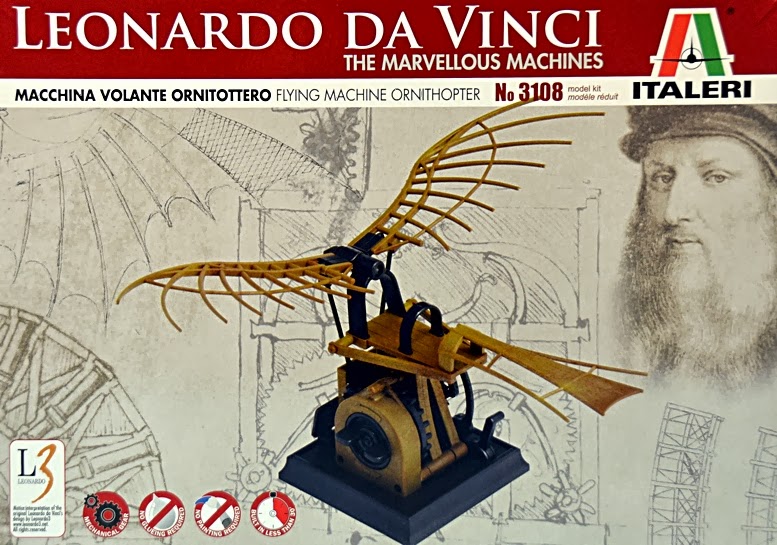 The 1:25 scale Italeri kit is one of the simplest you are likely to build, as all the components snap together, and you could probably have it complete in just 10 minutes or so. 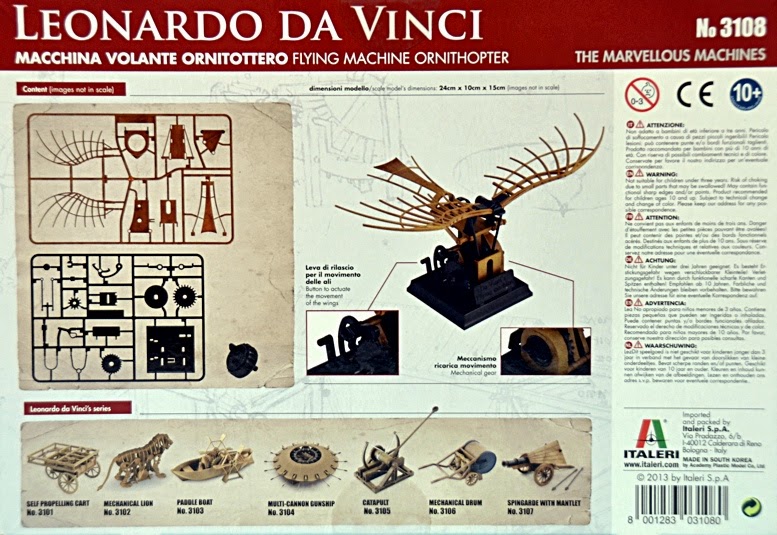 Moulded in two shades of plastic, representing wood and metal, most of the construction - and the components - go toward creating a working aspect, as the model is powered by a clockwork motor that makes the wings flap up and down. The ornithopter airframe itself consists of only nine parts, the remaining components consisting of gears and other parts that enable the wing motion. 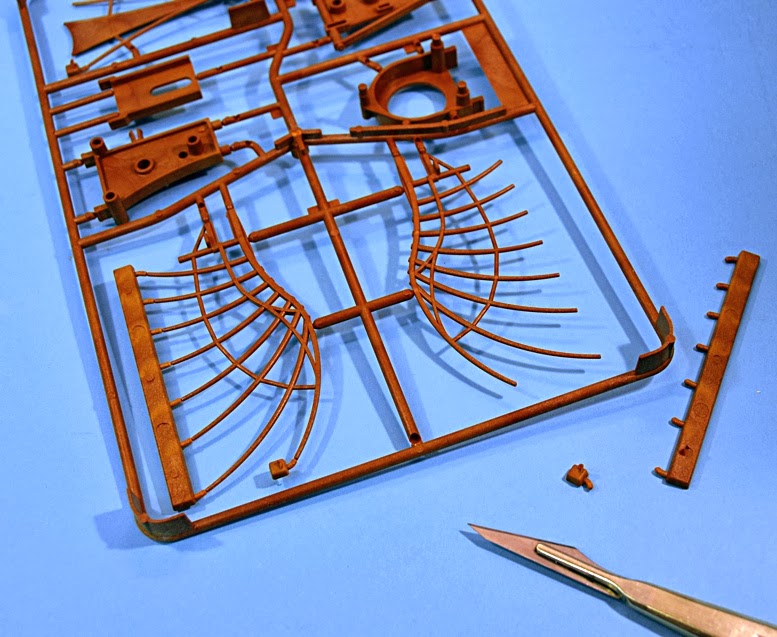 The ‘spines’ on the wings (above) have an extra cavity at their tips, so the molten plastic flows through. These lumps need to be carefully cut away - the left-hand one (above) is still in place, the right-hand one removed. 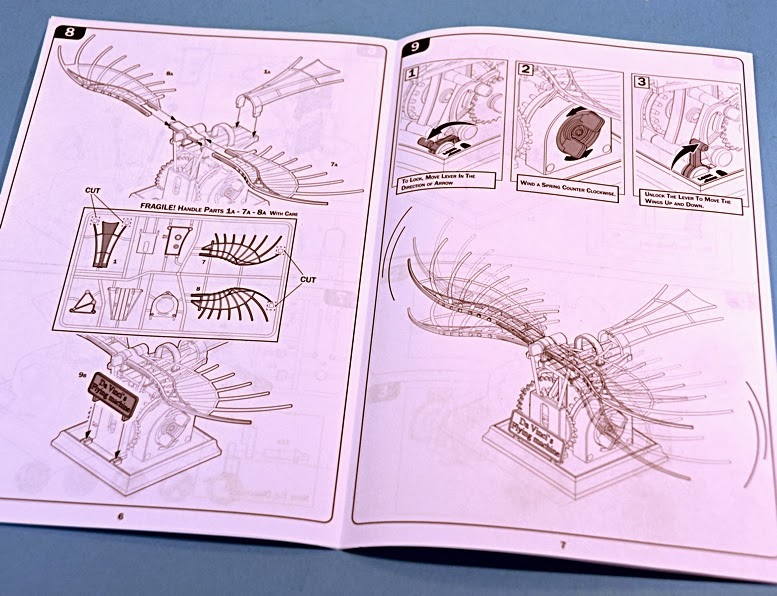 Note the pre-assembled clockwork motor (below bottom) supplied with the kit. It’s a good addition, as movement brings interest to the ornithopter, as well as revealing how it was supposed to work. 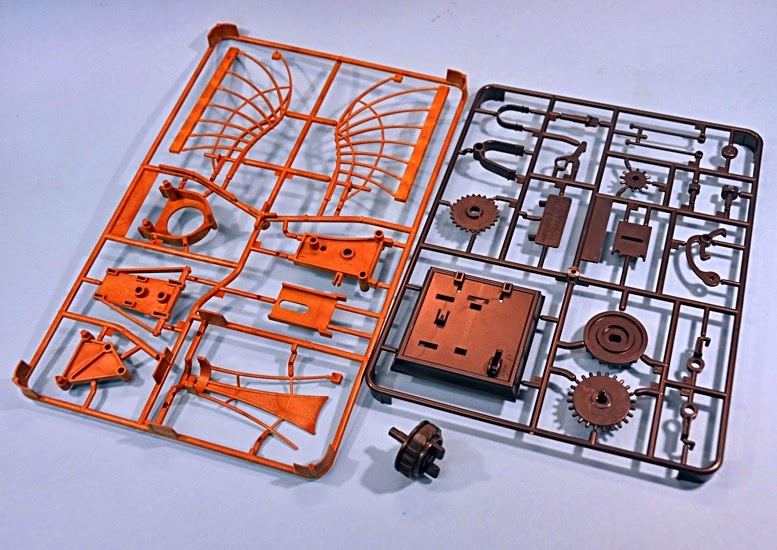 The model represents the ornithopter as Leonardo drew it (below) with skeletal bird-style wings, plus a simple central platform and tail. The sketches vary, as do most of Leonardo’s artworks. In one image, the pilot would lay prone, while others show him hanging underneath, rather like a modern hang-glider. In fact, taking the ‘flapping’ out of the equation, exactly like a hang-glider. 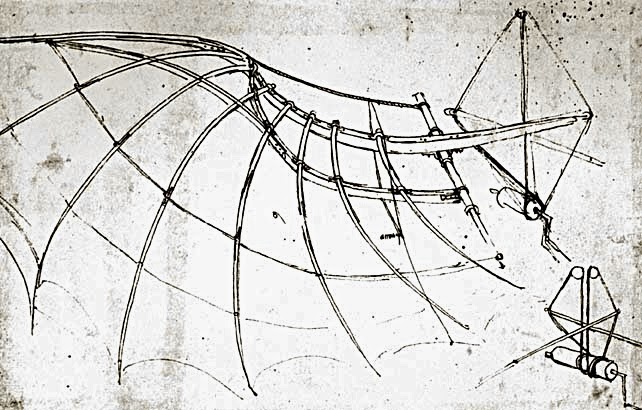 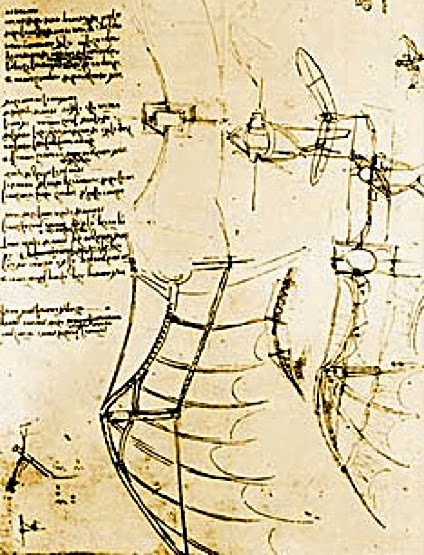 This model continues a resurgence of interest in the works and designs of Leonardo da Vinci. Oddly though, when the first three Leonardo kits were released, by AMT kits in the 1970s, they didn’t sell well at all. AMT had actually planned three more, but they were cancelled, due to poor sales of the first set.

Closeup of the business end of the clockwork mechanism (below) which doubles as a base with nameplate. 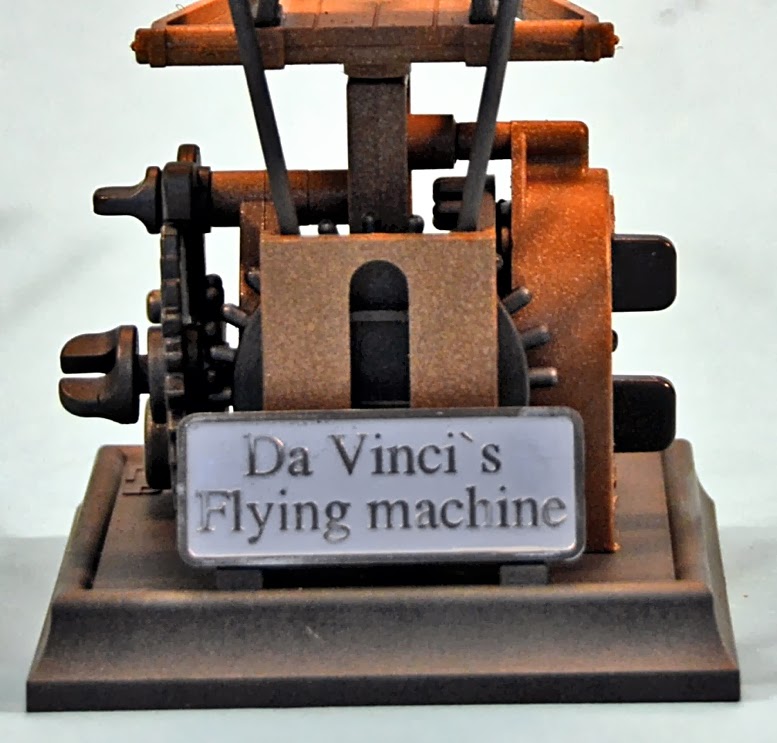 Now there are at least six model companies around the world, producing a wide range of Leonardo inventions, between them probably covering virtually everything he envisaged.  Some of these involve traditional materials that Leonardo would have been familiar with - such as wood and cloth - along with more recent materials such as plastics. Even there though, Leonardo would almost certainly have understood the industrial processes involved. 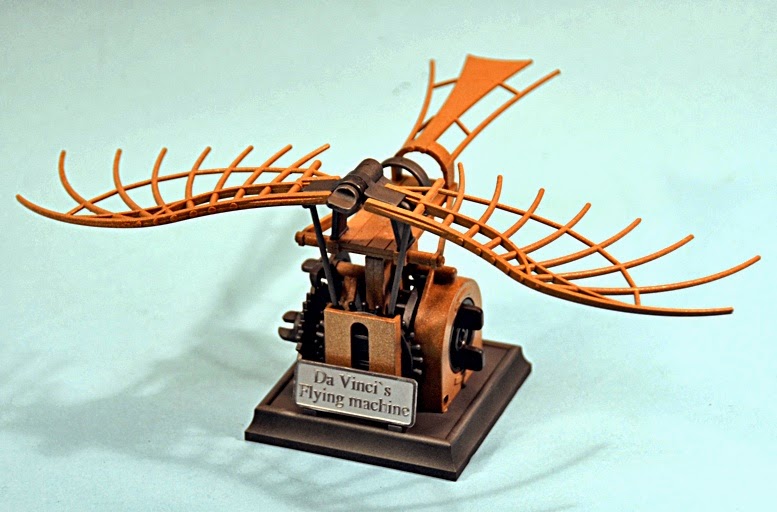 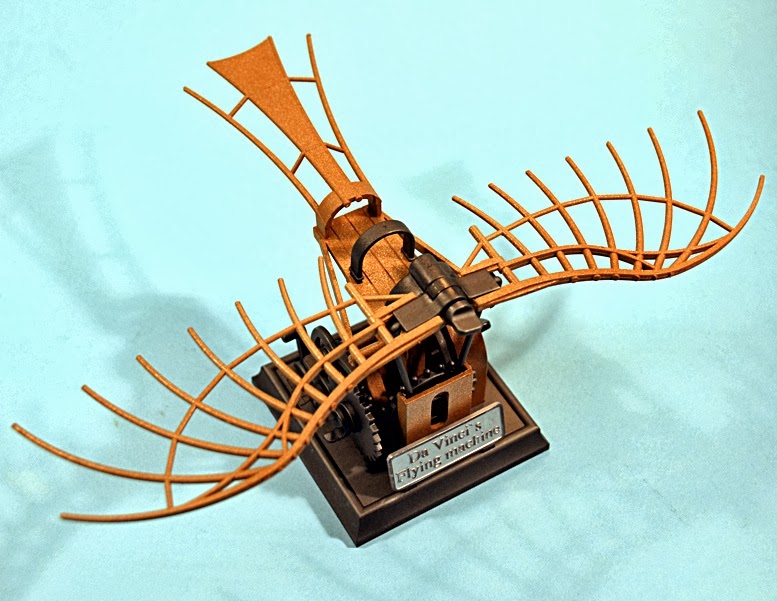 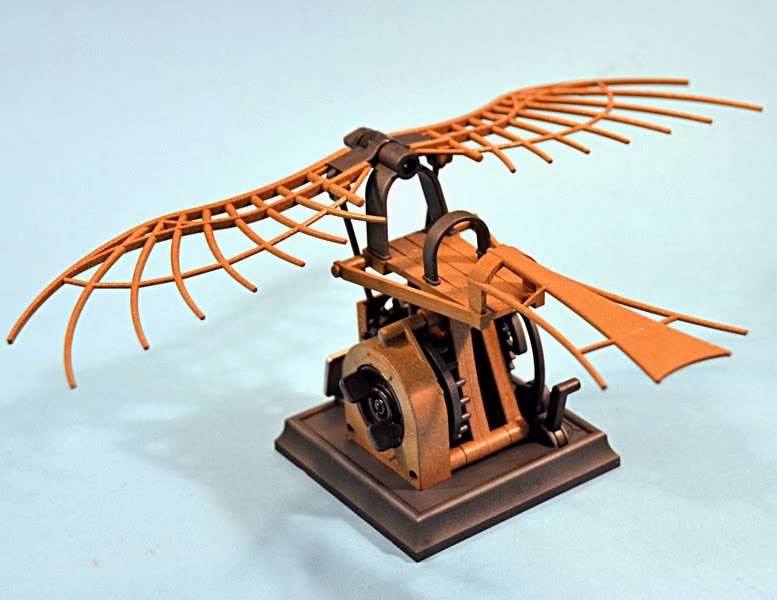 SMN Note: Steampunk and sci-fi fans rejoice: this kit is a gift to any diorama or model group that involves a fantasy element, and the 1:25 scale is a reasonably widely-used one, too. At a pinch, you could include Leonardo's ornithopter with suitable 1:18 scale cars - perhaps a DeLorean, a Batmobile, in fact, more or less anything that lends itself to a fantasy setting.

Then there's John Carter of Mars, a movie that vanished without trace, but one that had some really good special-effects, including some ornithopter Martian flying machines (below) the whole thing courtesy the writings of Edgar Rice Burroughs. 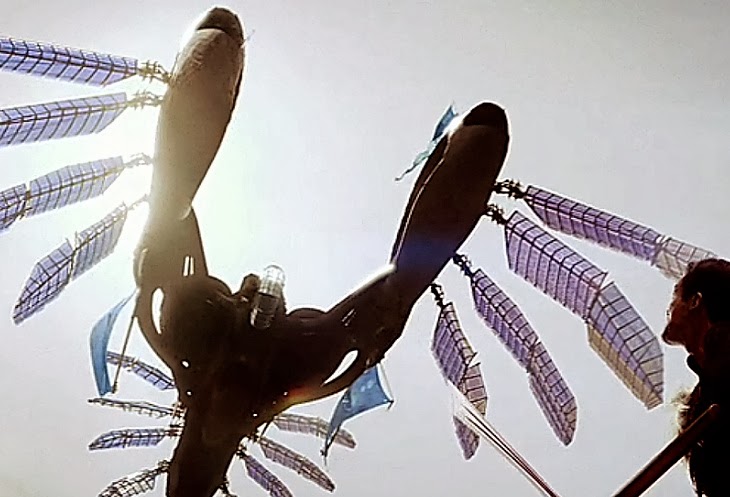