Mat Irvine: There is a new box, still with the Ron Miller artwork. It occupies the whole box-top, with no lettering to spoil the illustration. Underneath, poster-style art invites you to, Travel to Mars the Fastway. 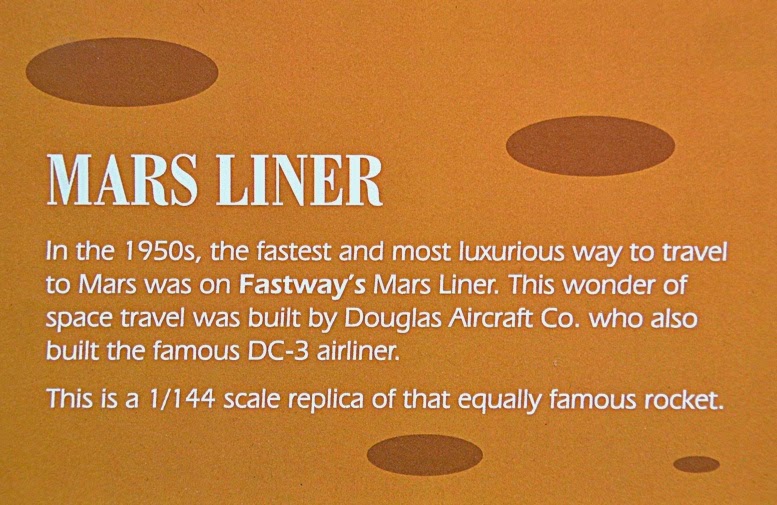 The kit tooling dates from 1956, and is now approaching 60 years old, so some allowance has to be made for its age. But Glencoe Models is owned and run by Nick Argento, and part of his company’s work is general injection moulding, so if anyone can get this half-century old tooling to run, it’s Nick.

The component layout (below) shows that most parts are in white styrene, with portholes and flight deck windows in clear. The original Strombecker kit had these in a tasty shade of green, with instructions to fit a pencil-torch through the rocket nozzle to illuminate them at night. 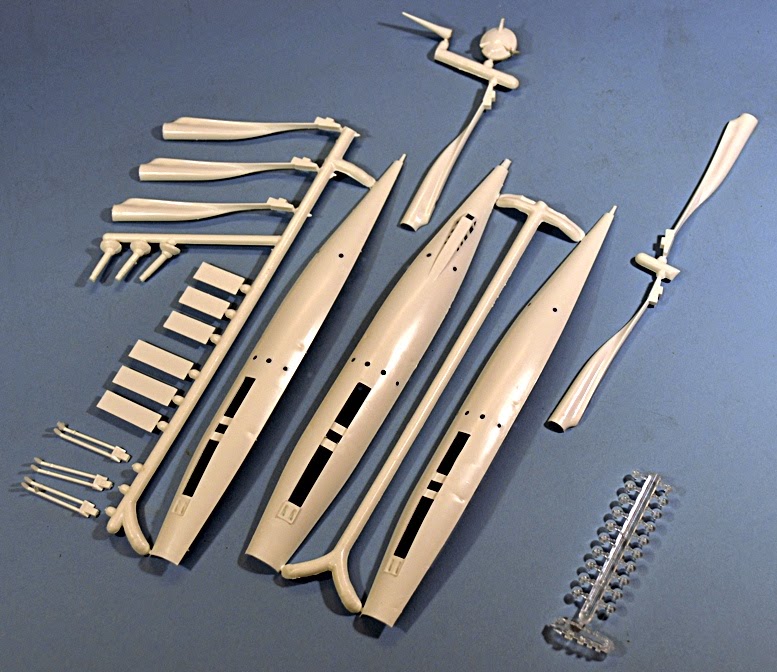 Given the kit’s vintage, the parts are surprisingly clean, with very little flash - some far more modern kits have a lot more. However, the ‘gates’, the sections where molten plastic flows from the runner into the cavity, are larger than more modern kits. In addition, you will see the runners themselves are somewhat thicker. You may find sink marks in some of the parts, especially the three hull sections. The sinks tend to occur where parts are quite thick, where locating pins are inside, and the plastic contracts slightly, leaving a depression. But it’s not difficult to fill the problem areas with model putty, and sand the area smooth.

The kit’s paperwork (below) includes instruction sheet, decals, and a postcard to enter the Glencoe 2014 Space Raffle, which will give away space art and posters. 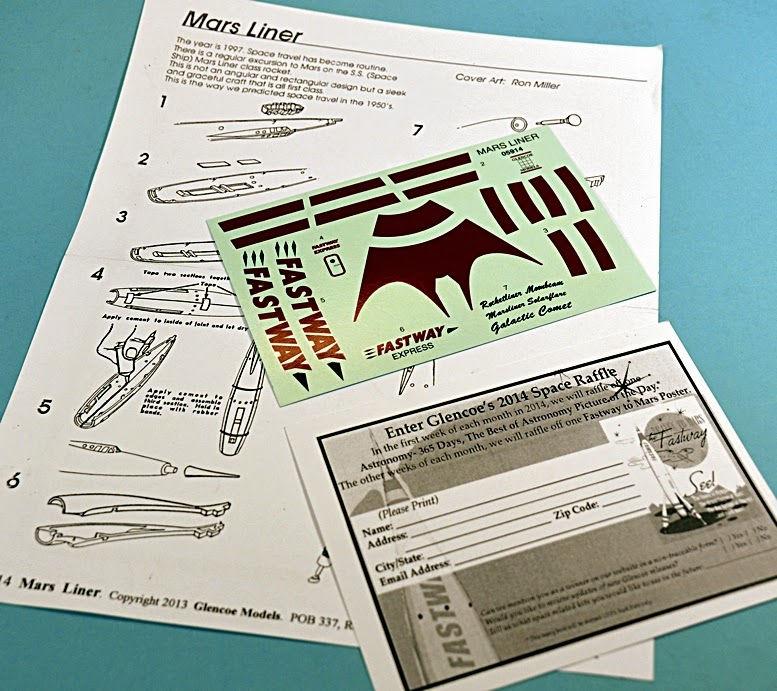 The scalpel blade (below) points to the somewhat larger gate than is usual with a modern kit, and the thicker runners. But this kit is over half a century old. 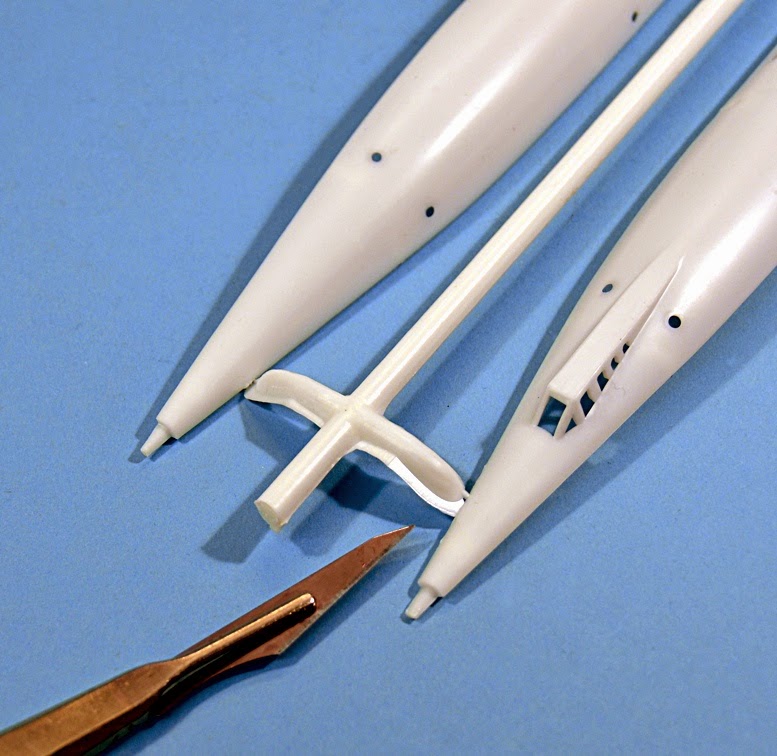 One construction situation that exists with this kit is that the hull is in three sections, and the tiny windows need to be fitted from the inside, before the three are fitted together. This means you may have difficulty filling and sanding before painting, as each tiny window would need to be masked. Much of this I cover in Chapter 3 of my book Scale Spacecraft Modelling, but here is one quick solution.

Cement two hull sections together, one of which should include the flight deck. Fill gaps and sand smooth, then fit the remaining hull section in place, but don’t glue it. You can do final sanding, though no filling, as that would require the parts to be cemented together. But you can now do final painting ‘as one’. Then remove this third section and fit the windows and cockpit canopy, after which the whole hull can be finally assembled. If you display the model with the ‘finished’ side to the front, you won’t really notice this ‘compromise’ at the back. 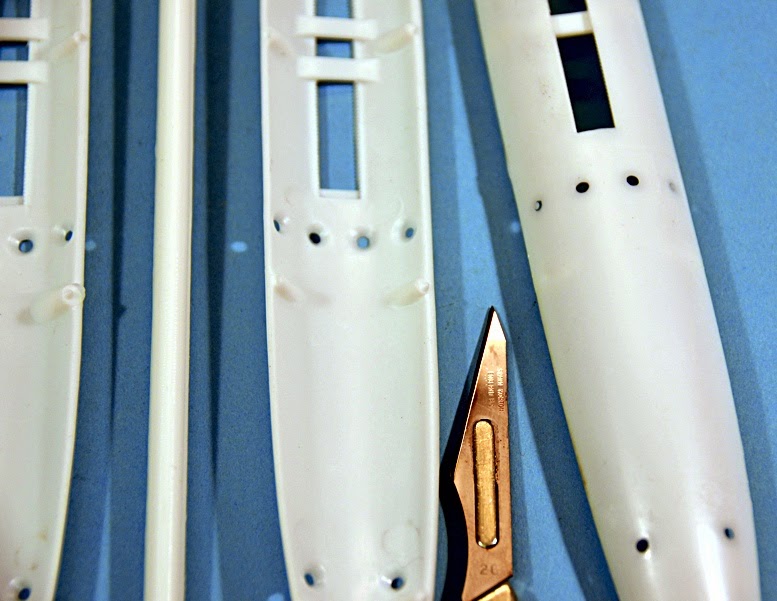 The scalpel points (above) to where locating pins on the inner surface can lead to slight sink marks on the exterior. They can be filled with model putty (below). Here picture shows two hull sections have been fitted together, the third left loose. 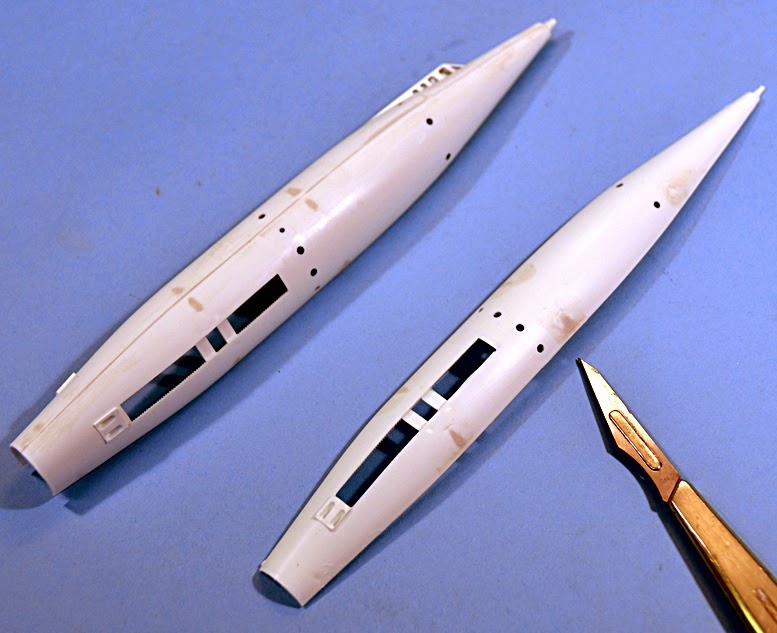 The original Disneyland Moonliner was white, with red stripes and markings of the first sponsor, Trans World Airlines (TWA). The Marsliner decal sheet has the correct stripe pattern, but the lettering reads FASTWAY, which doesn’t need much of a stretch of imagination to see that it contains the letters T, W and A. The only slight problem is that the red print on the decal sheet is too dark for an original Moonliner - but for a Marsliner, who is to say it is wrong? 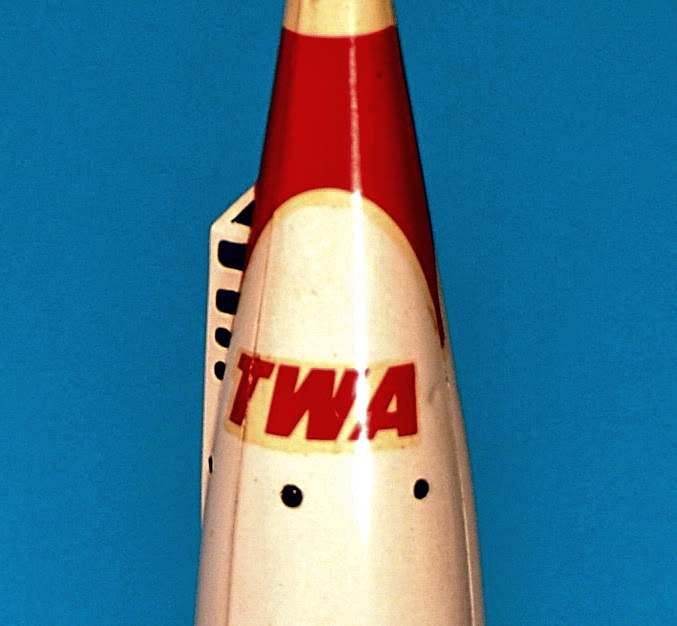 Closeup of classic Moonliner (above) in original markings. This is a somewhat time-worn Strombecker original. The Glencoe Marsliner (below) finished as a Fastway interplanetary spacecraft. 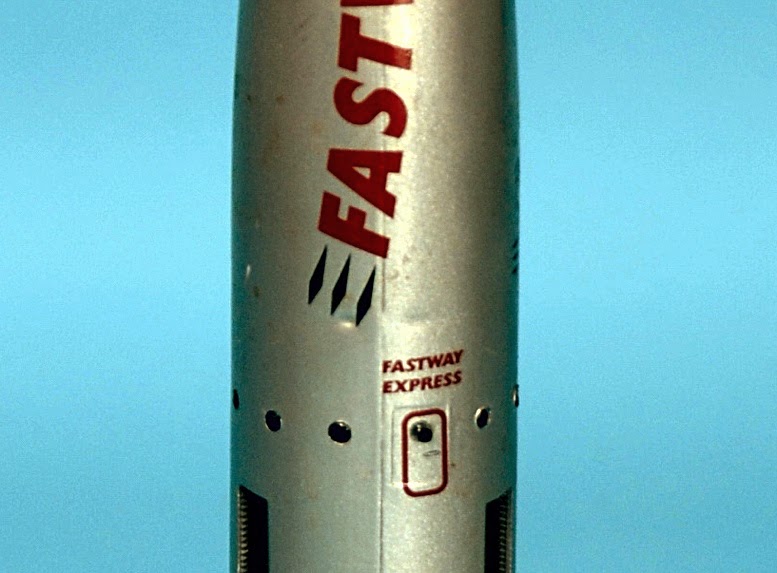 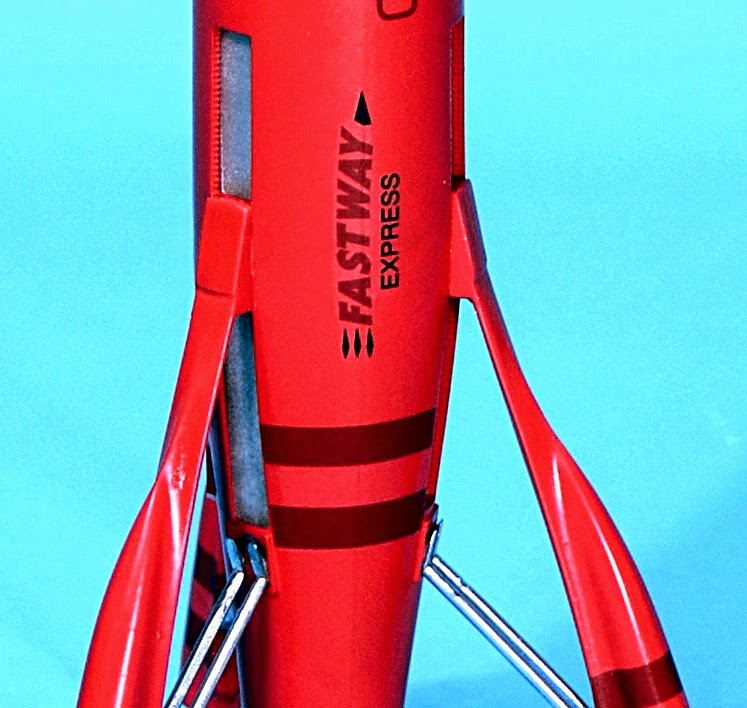 All three versions of the spacecraft: a Moonliner and two Marsliners. 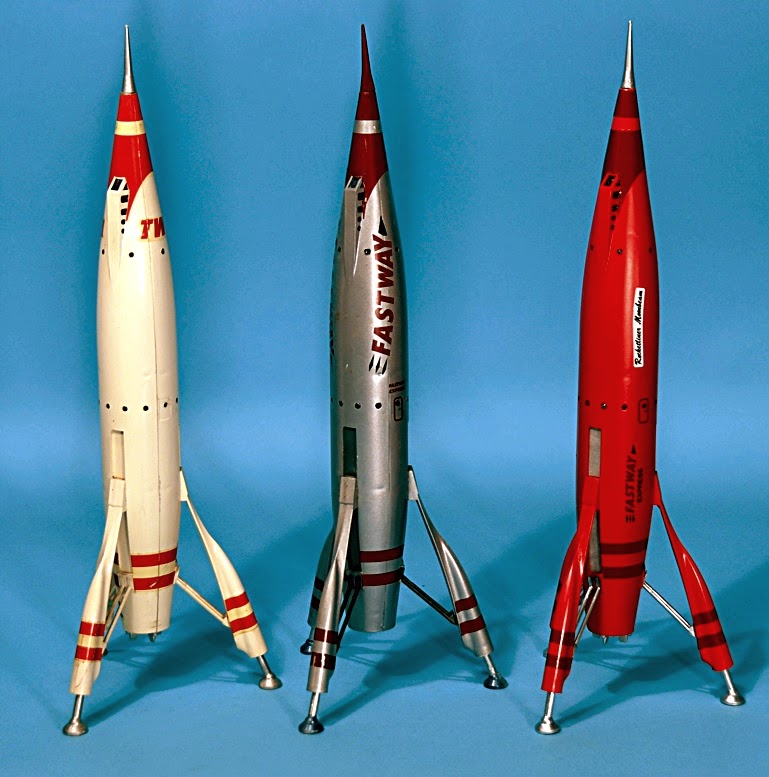 A variation I featured in Scale Spacecraft Modelling was to build the legs folded for flight, as pictured on the original Strombecker shop display backing board (below). These shop displays were literally that - a card diorama with an assembled model for model shops and hobby stores to display. Most are highly collectible now. 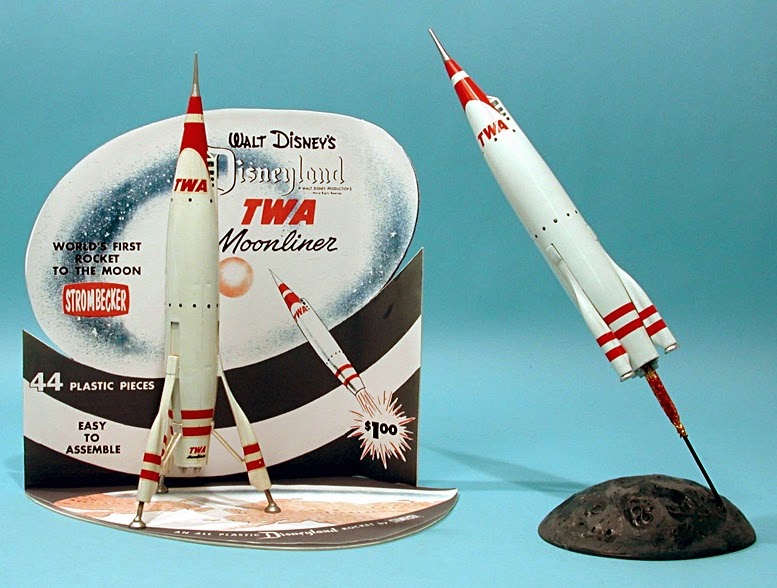 Another diorama idea (below) using two Glencoe Strombecker reissues, the base for the three-stage rocket, and an ex-ITC Precision Miniatures Sikorsky S-55 helicopter. 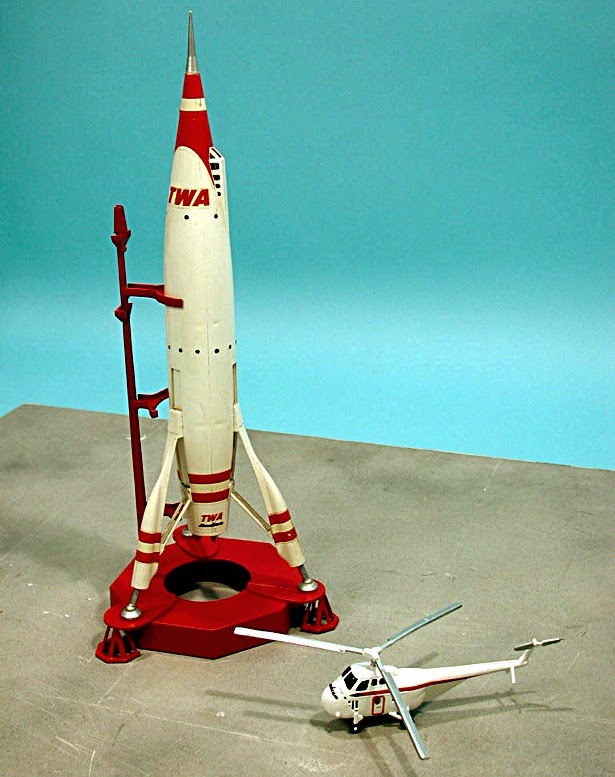 Walt Disney (below) with assorted models, including the Moonliner. Note this version’s spindly landing legs, which are very different from the ones used in Disneyland or the model kits. 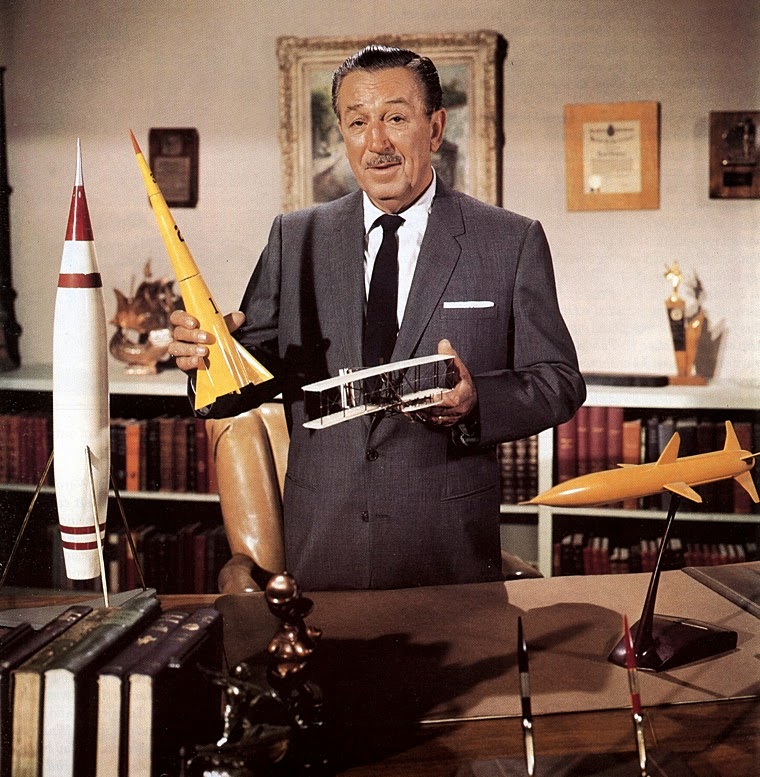 SMN note: The Disney TWA Moonliner was BIG, standing some 23 m (76 ft) tall. Even then, it was only a one-third scale model. As envisaged, a real Moonliner would have been a nuclear-powered spacecraft, standing more than 61 m (200 ft) high.