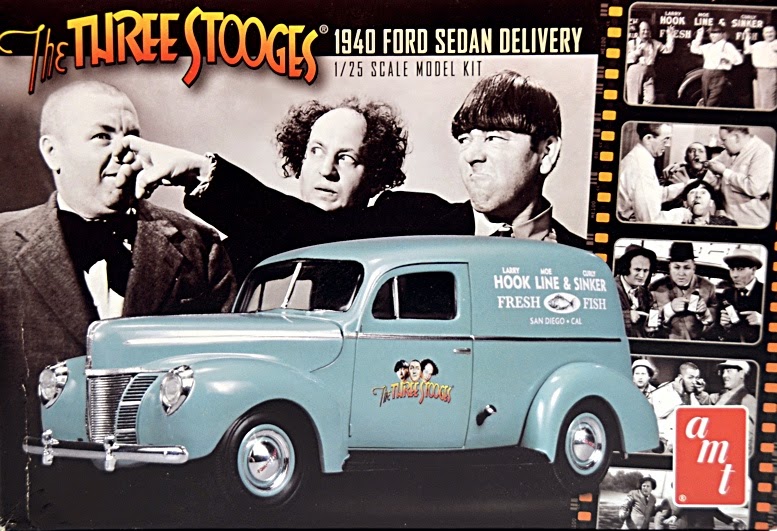 Here’s a 1:25 scale auto kit that doesn’t quite fit under the AMT ‘Silver Screen Machine’ series, but does have a movie connection.

Mat Irvine: This kit is basically a straight Round 2 reissue of the AMT 1940 Ford Sedan Delivery, the commercial version of the then-current car, and what today would simply be called a panel van. The box end (below) shows movie stills, and decal sheet content. 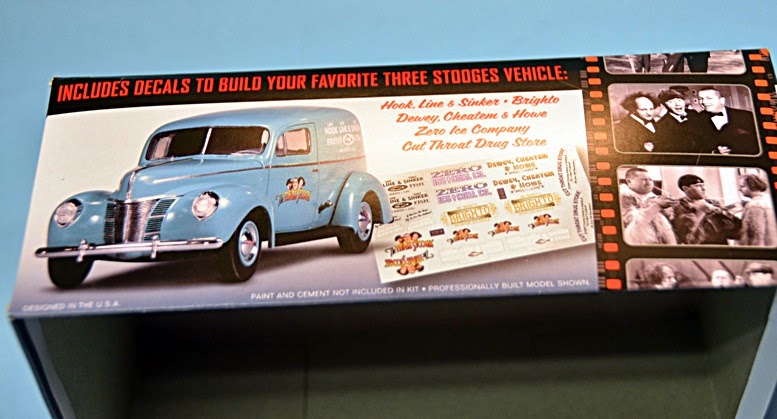 The kit first appeared in AMT’s Trophy Series and could be built as a classic ‘3 in 1’, or in one of three ways - stock, custom or competition. With this AMT re-release, you get all the original parts, the majority moulded in white, clear for the windows and lights, plus the usual chrome-plated runner for all the shiny bits. 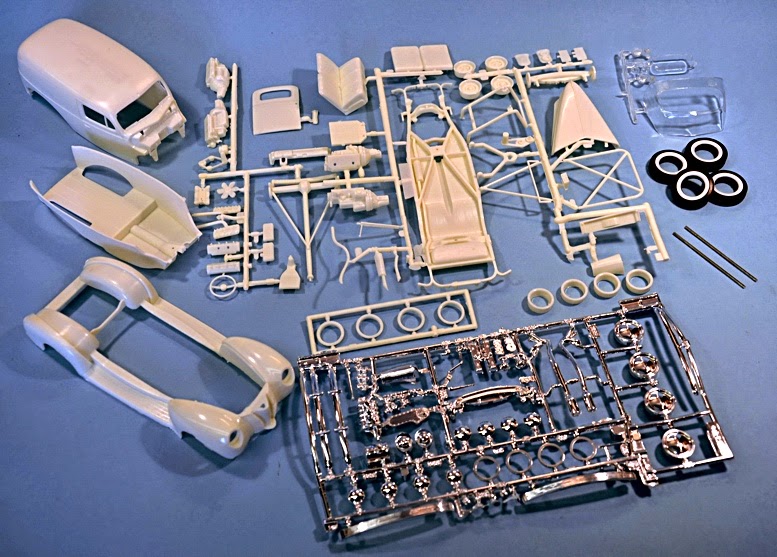 Two engine blocks are provided, a stock Ford side-valve V8 and an early 1960s Buick overhead-valve V8. The latter can be built with triple carbs for the custom, or with a GMC blower (or ‘supercharger’ for those uninitiated into the language of drag racing) for the competition version. Wheels are stock steels, custom wheel covers, and - again for the drag route - mag (magnesium) wheels, with slick tyres at the rear.

Rear door (below) cut out from the vehicle body shell, with thin plastic strips that allow it to sit neatly in place. 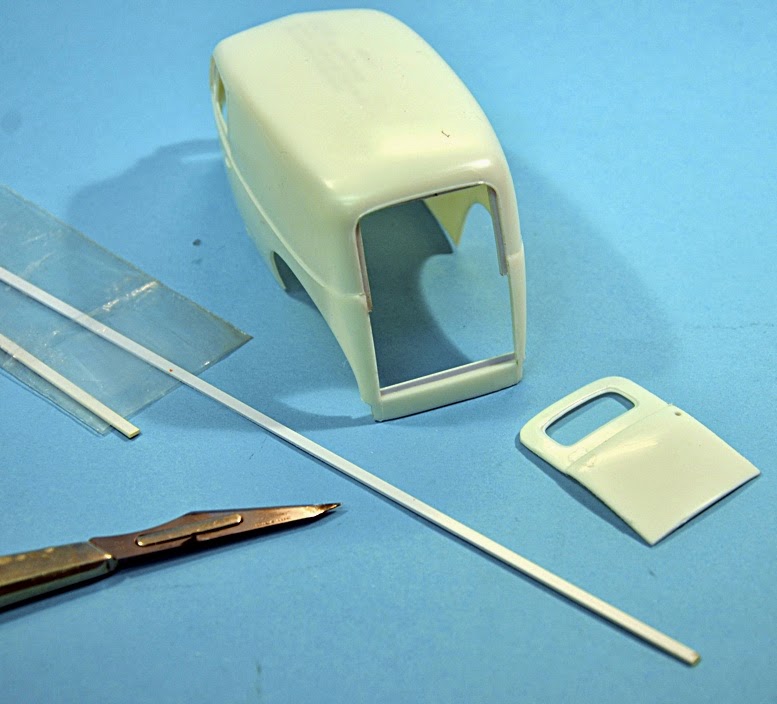 The interior is slightly more staid. As it is a commercial vehicle, the section behind the front seats is a flat floor, with wood panels and metal straps. The rear door is moulded in with the body, but it is a straightforward matter to cut it out, then it can be positioned open or closed. As shown in the pic, thin plastic strips can be added, to act as a door jam.

Rear door removed (below) with interior floor visible. The floor is painted to simulate wood, the metal runners covered in Bare-Metal foil. The object below the floor is the spare tyre, though you only get this moulded representation, rather than a complete tyre. 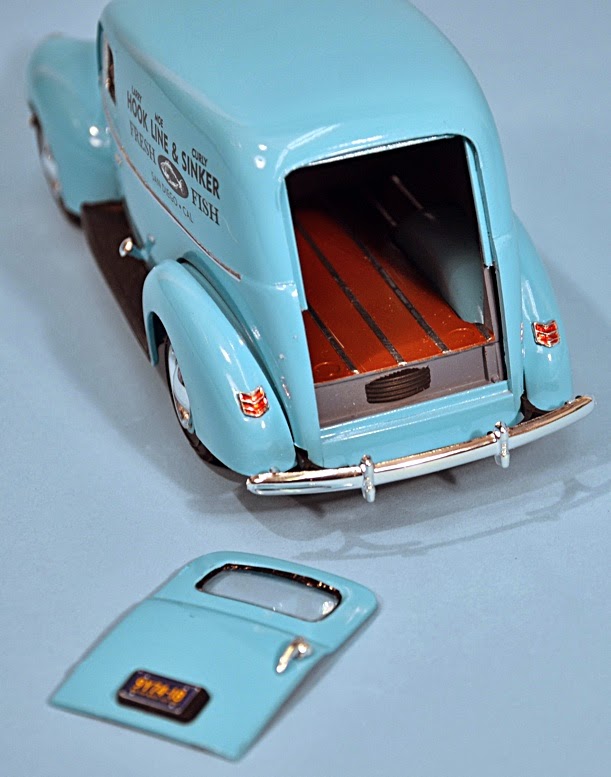 Custom or drag versions of this Ford Sedan Delivery van can have a roll bar, and a ‘Moon-style’ fuel tank. The interior can be fitted with a snazzy gear shifter, which has a die as the knob. Front and rear ends have stock bumpers or custom ‘nerf’ bars, while the spare engine, the one you don't use, has a stand on which to display it. Alternatively, the vehicle can be treated as a custom car kit, in which you can mix and match all these parts just as you wish.

The box top (header pic) prominently features the Three Stooges, in what is probably their best-known lineup, from left, Curly, Larry and Moe. The photo (below) shows the actual ‘Hook, Link and Sinker’ vehicle, most likely a 1930 Ford Model A panel van that featured in the 1945 short film, Booby Dupes.

If you are unaware of the Three Stooges, here’s some background info. They were an American comedy group that began in vaudeville, but moved to the silver screen, especially in ‘shorts’ - movies that could be fitted onto just two film reels. 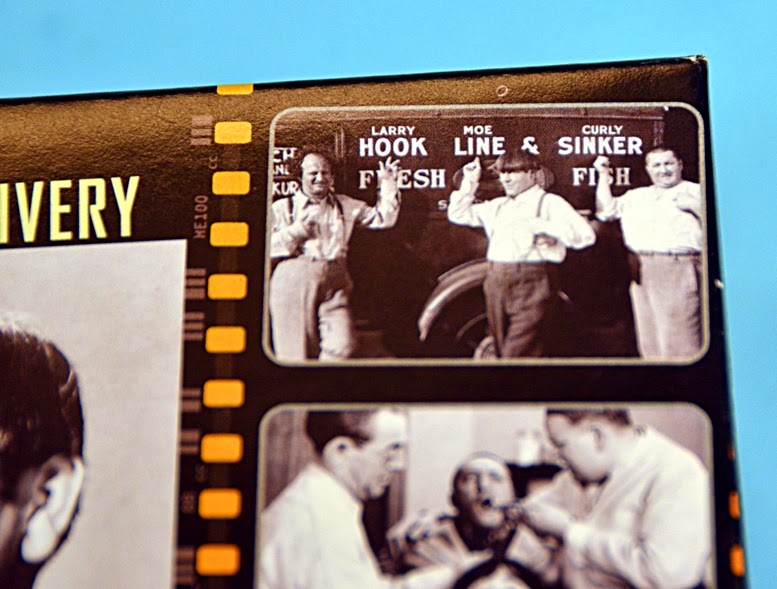 The kit’s Three Stooges connection is only in regard to the decal sheet. On this, you have such logos as ‘Dewey, Cheatem and Howe’, ‘Dr Bright’s Brighto’ and ‘Cut Throat Drug Store’, which are all genuine names that appear in the movies, although not necessarily on a vehicle. However the decal applied to this model was, 'Hook, Line and Sinker,' a line that’s definitely from an on-screen vehicle, as it is shown on one of the movie stills that adorn the box-art. However, that seems to be a 1930s-era Ford A Panel van, not this 1940s version.

The model's two main exterior sections (below) in finished form. The body is finished in Testors Light Blue, with running boards in Humbrol Satin Black. 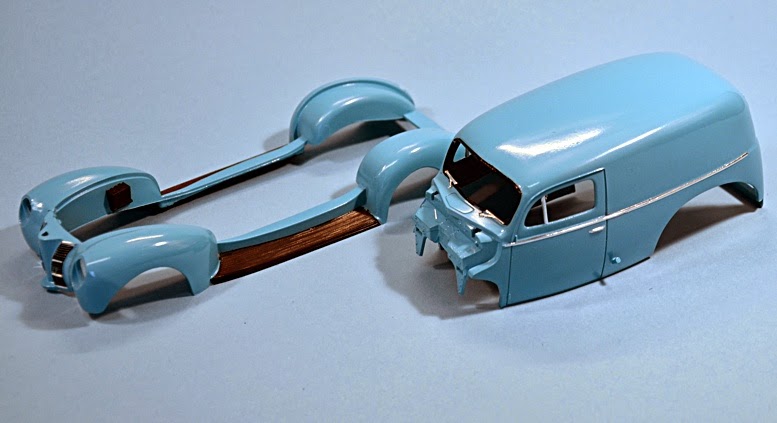 Their nearest equivalent is probably the Marx Brothers, though the latter were genuine brothers, five in all, though only four ever appeared in movies, and only three, Groucho, Chico and Harpo, were known really well. 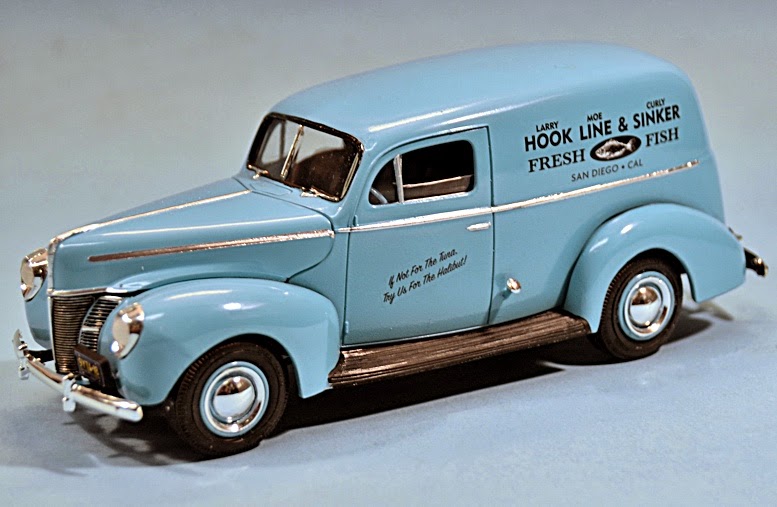 The Three Stooges are less clearly defined. There were sibling relationships, and most of the time the lineup consisted of brothers Moe and Curly Howard, plus Larry Fine. But there was a third Howard brother, Shemp, who actually started before Curly. He left the trio at one point, but returned to perform when Curly became ill. 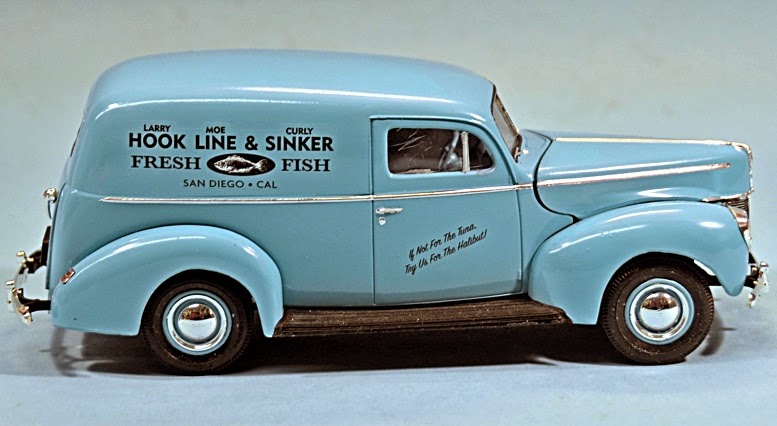 There were at least two other, non-related, Stooges in later years, hence the less-defined status of the trio - but then, that probably sums up the Three Stooges. 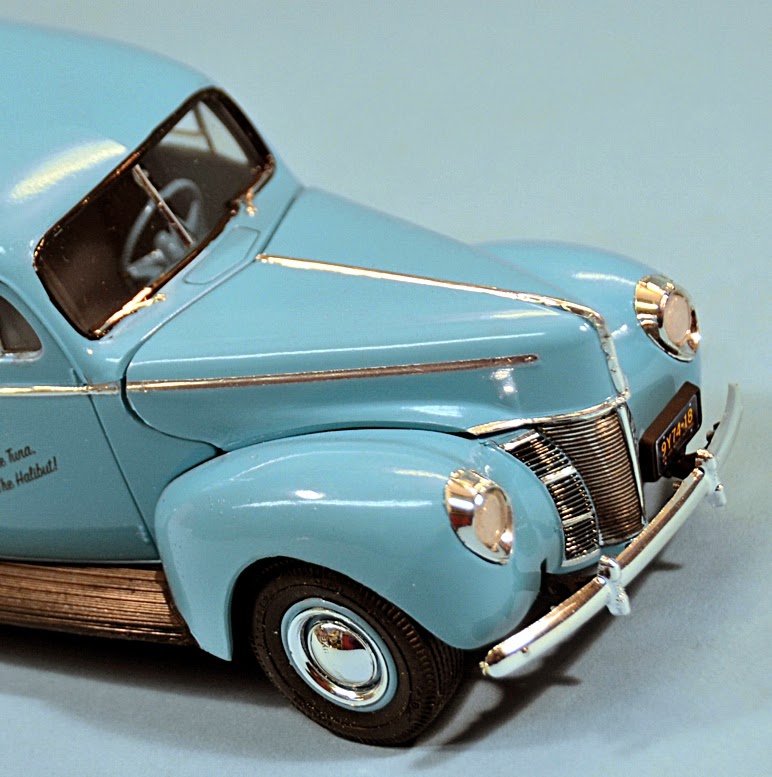 The engine block (below) is the stock side-valve Ford V8, but the custom Buick overhead-valve V8 could be used instead. 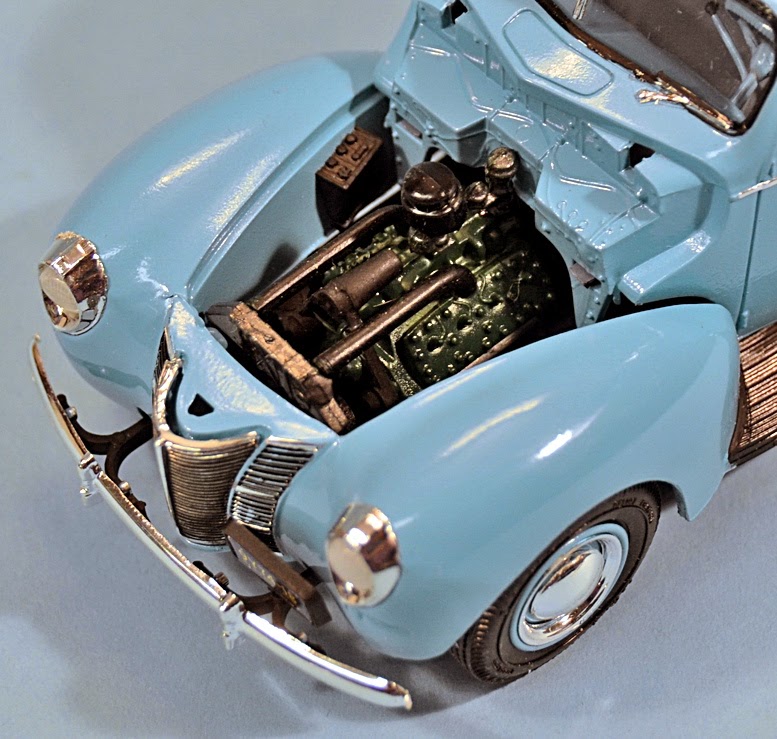 Rear view (below) showing the door in closed position. 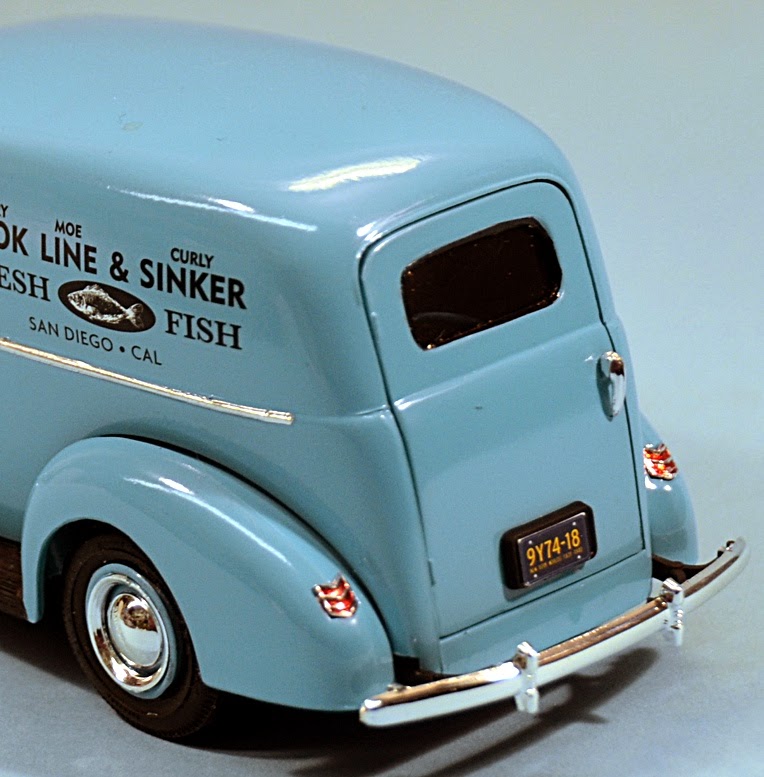 One nice touch that would set this kit off well would be figures, which are not supplied. However Round 2’s Polar Lights brand does offer a Three Stooges set (below) in 1:8 scale, making them around three times bigger than the 1:25 scale of the Sedan Delivery truck. 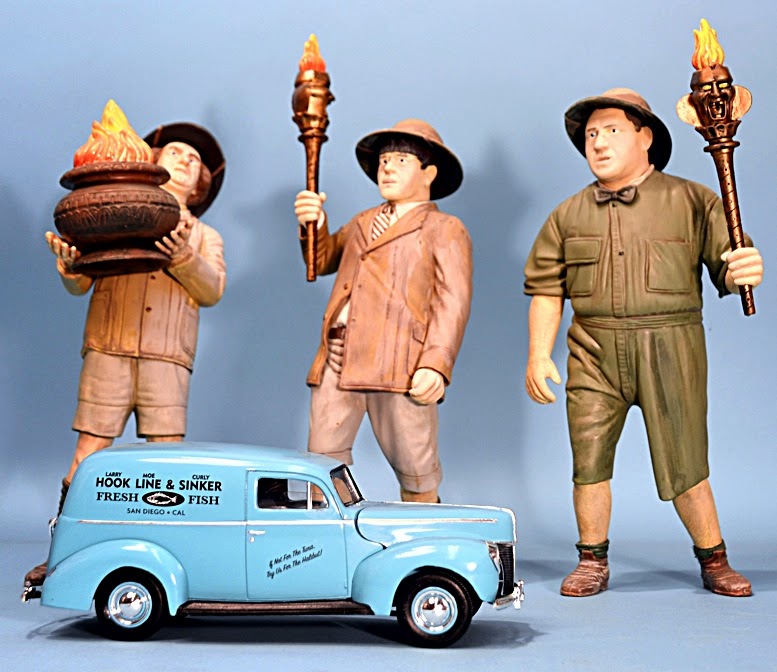 But a touch of Photoshop can perform wonders, as the combo pic (below) shows. Note that the Stooges are dressed as they appeared in the 1939 short We want Our Mummy so perhaps they are not entirely suitable for the Hook, Line and Sinker van. 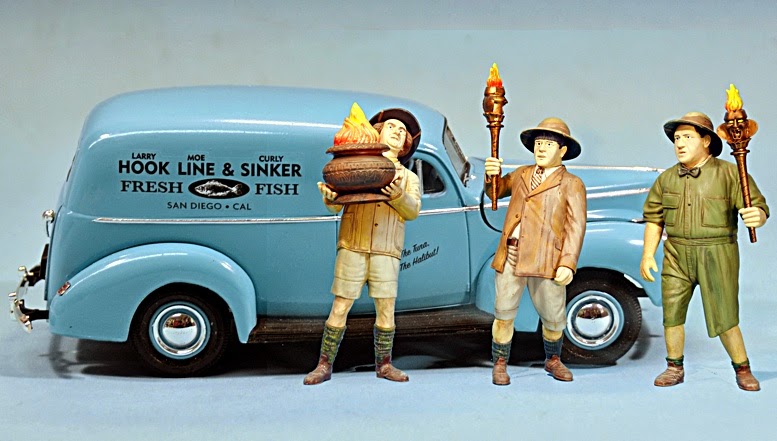 Three classic Stooges movies (below) available as downloads or on disc. Alternatively, their movies are available in boxed sets. 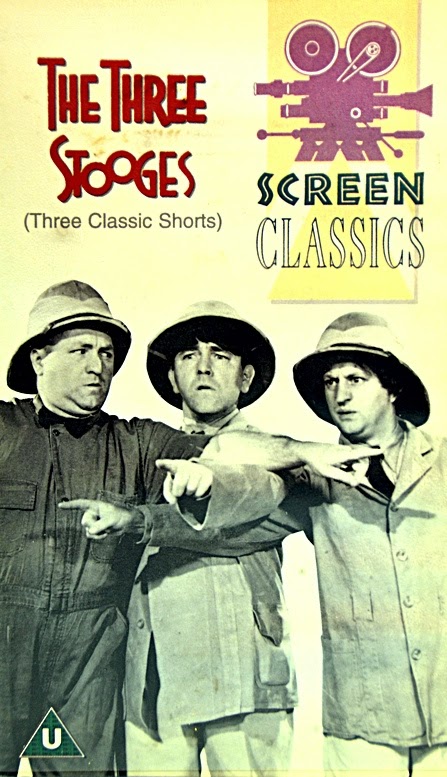 Thanks to Round 2 for the review kit, and to Ken Holewczynski for additional information.