Five years ago, we looked at Aurora kits which, "...represented a goldmine of exotica in years gone by. While other companies were giving us familiar (even then) P-51 Mustangs and Spitfires, Aurora teased us with luridly marked P-36 Peashooters and of course, movie monsters like The Mummy…"


Even today, the grisly old Mummy beats most nasties hands-down, and we said about the Aurora kit, "...Creatures from the movies were Aurora’s stock-in-trade, and made the range very different from the likes of, say, Airfix. Of the various Aurora offerings, The Mummy wins, for his classic gruesomeness."

Mr J added, "... But the nearest I got to frightening anyone with the model was to fix him inside a sealed black box, with a pair of eye holes in the front. “Look inside the box, Sue”, I said to my elder sister. She emitted a faint squeak as she stared at the dim ‘Glow in the Dark’ bits of The Mummy, then sighed and went back to combing her hair..." 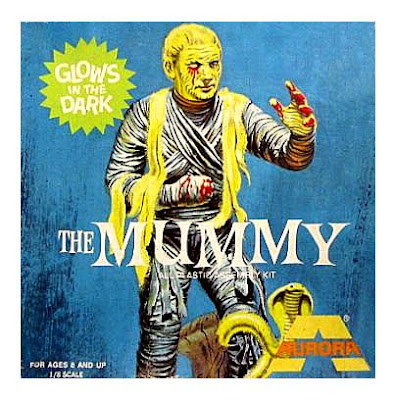 The Lockheed XFV-1 (below) raised our eyebrows, "...The 1950s was an era of dramatic invention, with a scale and range of aero-experiments that was mind-boggling. And Aurora was right there, reflecting those ideas. The XFV-1 was one of a pair of US VTOL prop fighters that achieved little flight success, never went into military service, but to a tech-obsessed youngster, their amazing looks were signs of things to come."

The Aurora Roman bireme was a reminder of school days, "...A school project got me going with this, and its 1:80 scale wasn’t too far away from standard aircraft 1:72. We created a Roman invasion scene with a plaster-of-paris sea, and a beach made with real sand. It looked pretty impressive, and I took it home afterwards to add a few 20th century items, thus creating a Rome-with-the-Allies D-Day landing zone." 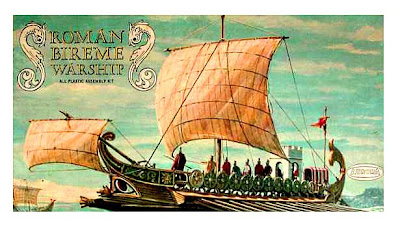 Mr J had this to say of the Aurora Swedish S-tank kit, "...I wasn’t an overly military boy (though my Dad was ex-Army) but I did enjoy a tank or two, with Shermans and Centurions among my top heavy weapons. The ‘S’ hit the spot for its futuristic weirdness - a tank with no turret? What were the Swedes thinking about?! The scale - 1:48 - sold it to me, as I was (and still am) a fan of this scale. But after assembly, it didn’t look much like a tank somehow, so I mounted an instant-coffee lid on top, attached various dish antennas, then sprayed the lot white, to create an exploration vehicle with built-in helipad. And I won a model competition with the result!"

And the Orion space shuttle brought a nostalgic tear to his eye, "...I was lucky enough to go to the London opening of Stanley Kubrick’s 2001, and it was the very first sci-fi movie I saw that had convincing special-effects: look - no strings! The Orion, complete with Pan Am markings, was my idea of what a spacecraft really ought to look like. As for being served by a tasty (and weightless) space hostess, the mind boggled. Aurora’s kit was made to a notional 1:144 scale, and had good detail for the time, including a spacefaring nuclear reactor in the tail."

We summed up this quintet of memories like this, "...Today, such kits achieve good prices on the collector market, and quite right too - though of course, once they achieve such status, they’ll never get built, which is a bit of a shame."

Here in 2014, these kits are as desirable as ever, though if pushed to make a choice of just one, it would have to be the XFV-1, which along with the similar Convair XFY-1, was a weird but wonderful experimental aircraft that we'll not see the likes of again.

That was the SMN Aurora Fab Five - what are your choices?