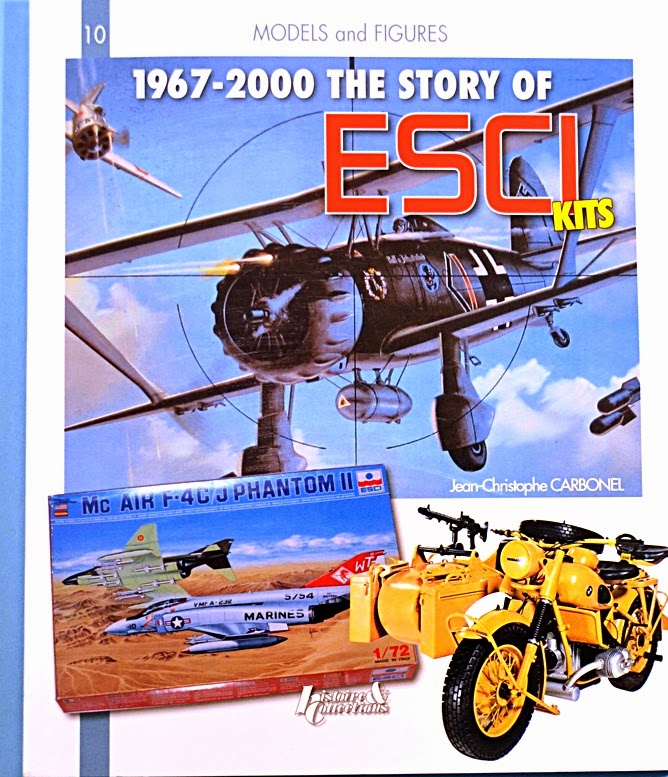 This is the fifth book French modelling expert Jean-Christophe Carbonel (universally known as ‘JC’) has written on aspects of various model kit companies.

Mat Irvine: JC Carbonel's book is about ESCI, one of Italy’s best known names in the modelling field, though one that ceased business more than a dozen years ago. This does however bring one advantage, in that the author can definitively chart the company’s entire existence, in this case from 1967-2000. To this end, most of the book has yearly announcements, with details of the significant new kits that were released over ESCI's 33-year history.

But those dates are not quite so simple, as JC explains, “The actual origins of ESCI can be traced to before World War II, when it was incorporated as the ‘Ente Scambi Coloniali Internazionali’ or Company for Trade with the International Colonies.” 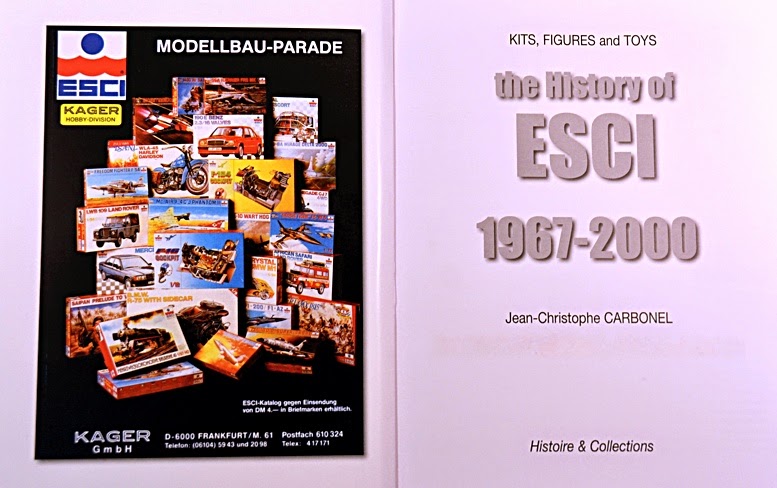 The inside front cover (above) carries an advert for Kager, ESCI’s distributer in Germany.

Initially ESCI just imported and distributed toys and models from Asian sources, such as Japan and Hong Kong. Even here, the use of the ESCI name came about as a convenience. Dino Coppola, ESCI’s founder, in an interview with the author stated, “Italian bureaucracy was complicated with lengthy procedures and incorporating a new limited company could lead to months of waiting…” But that problem was, “…circumvented by using the name ESCI as (it) had never been legally closed or liquidated.”

The book explains that ESCI didn’t start by manufacturing kits, instead the company produced detailed decal sheets for existing kits. As Dino Coppola said, “I had noted the poor quality of decals, with incorrect details and poor printing.” In ESCI’s first two years, some three million such sheets were sold. 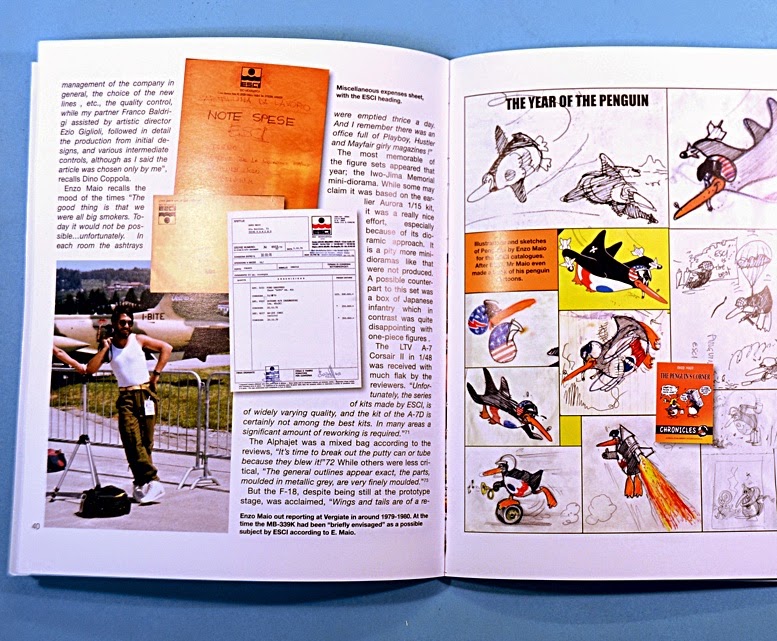 Most of the book is laid out chronologically, and we learn that it wasn’t until 1972 that the first ESCI kit proper was announced, a 1:9 scale BMW military motorcycle and sidecar. JC reveals that this was, “… the first military motorcycle kit to be marketed by any manufacturer, and it caused quite a stir when it was released.”

Besides the yearly announcements, the book has details and interviews with people associated with ESCI. Tony Chitto was one of the main box-art illustrators from around 1972. He recalls that initially, especially with military subjects, certain scenes were frowned upon. “I was asked not to paint violent scenes with dead people, gunfire or swastikas,” though he adds that this was later rescinded, so, “We could put explosions everywhere just like our competitors.” 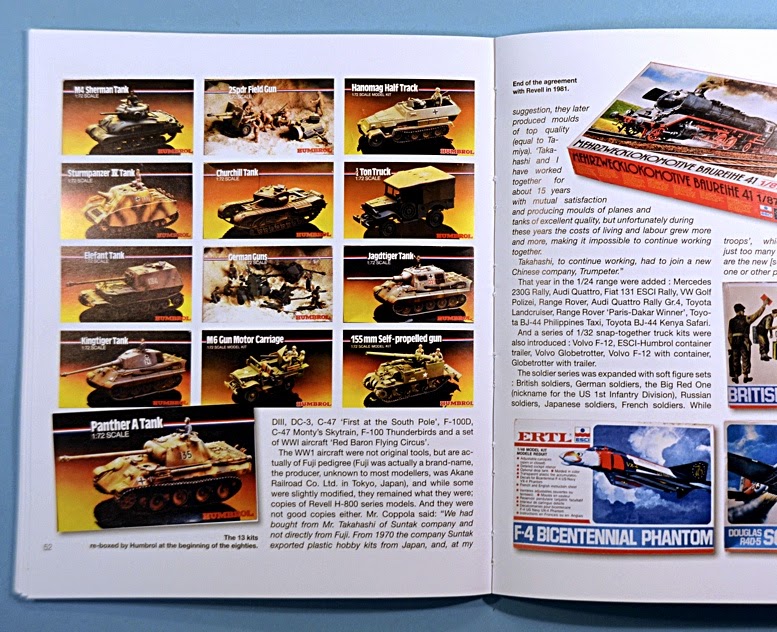 Most of the book deals with ESCI’s primary output of aircraft, AFVs and military figures. ESCI was one of the earliest companies to rival Airfix in producing 1:72/1:76/H0/00 figure sets. JC uses many quotes from model publications, such as the web-based Plastic Soldier Review, though some comments are not too flattering, suggesting that possibly ESCI’s 1:72 British Paratroopers were based on Airfix 1:32 originals. Here, JC quotes include, “For anyone wanting to see the Airfix 1:32 Paras produced in the smaller scale... this is about as close as you are going to get.”

As each year of ESCI’s existence is covered, JC charts the rise and fall of the company. Many new items were released in the 1970s and 1980s, but by 1990s, things had slowed down considerably. The book relates that in 1987, ESCI had been acquired by Ertl in the US which at that time also owned AMT and MPC, and there was considerable Americanization of the range.

A number of AMT kits were reboxed as ESCI items, though some ESCI cars were issued as AMT. But as JC says, “1991 was a blank year with no new announcement. The ‘beginning of the end’  one could say.” 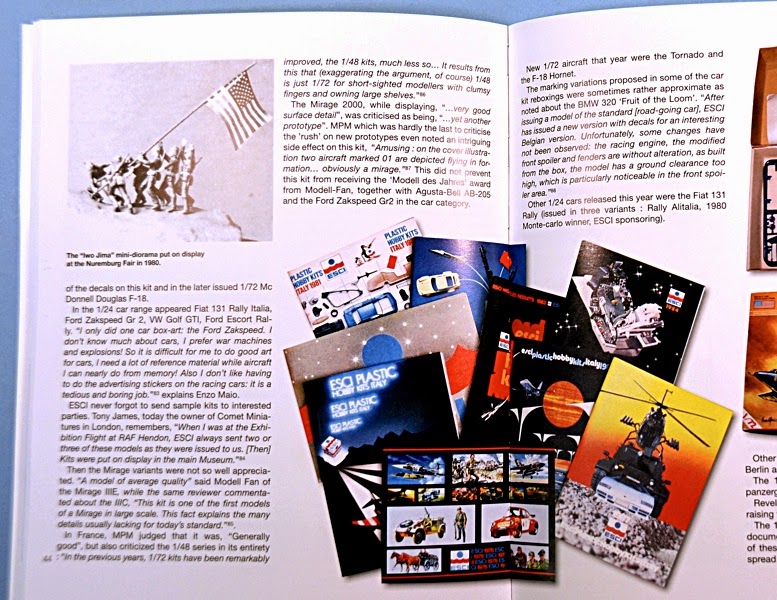 The last entry is, ‘From 1993 to the end’ and mostly covers what was planned but never issued. JC writes, “The many 1993 announcements remained just that… So we never got a 1:72 Rapier (missile) battery, a set of Modern Muslim Army Soldiers … or a B-52H.”

He adds that, “The 16-page 1999 catalogue is the last one issued under the ESCI name”. One last odd fact is that Enzio Maio, another ESCI illustrator, recalls that, “In the last year, production was done in Great Britain, with all the paperwork still being done in Italy. But the managers were all in the USA at that time.”

Finishing off this fascinating book, JC has included comprehensive appendices (below), including a listing of announced but unissued products, where ESCI used tooling from other companies, and - the longest appendix by far - a complete list of ESCI kits from 1967-1992, after which all kits were reissues. 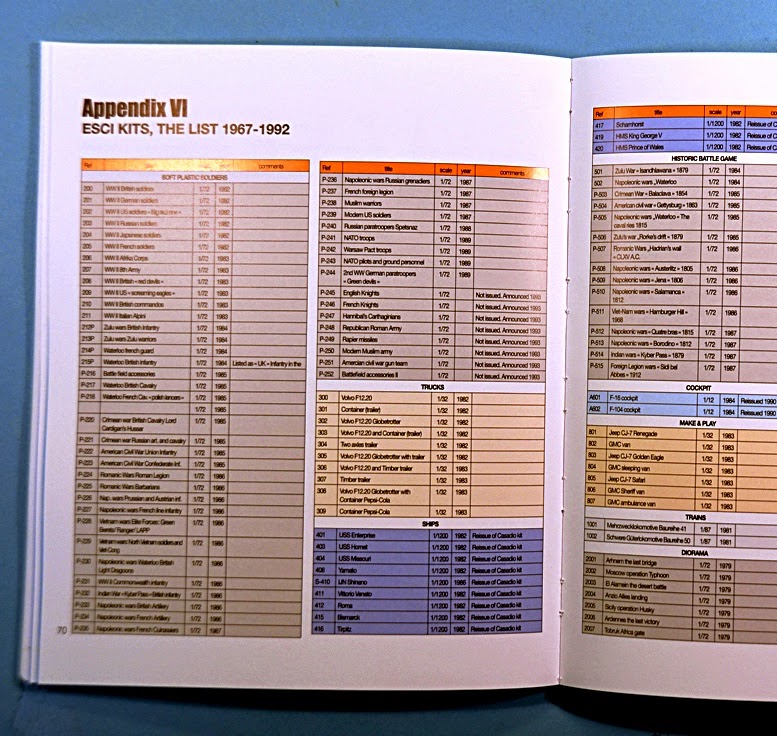 The appendices map out some fascinating facts, such as:
*  ESCI aircraft were produced in the two major model scales of 1:72 and 1:48, but nothing else, no 1:32 or 1:144, though there were two aircraft cockpit kits - an F-104 and F-16 - to 1:12 scale.
*  ESCI never produced its own ship kits, though it marketed some in 1:1200 scale from another manufacture.
*  ESCI released an eclectic range of 1:24 scale car and commercial vehicle kits, including a Ford Transit, original Range Rover, long-wheelbase Land Rover, and Mk I rear-drive Ford Escort (below).
*  I supplied JC with photos of these as built-up models for the book. 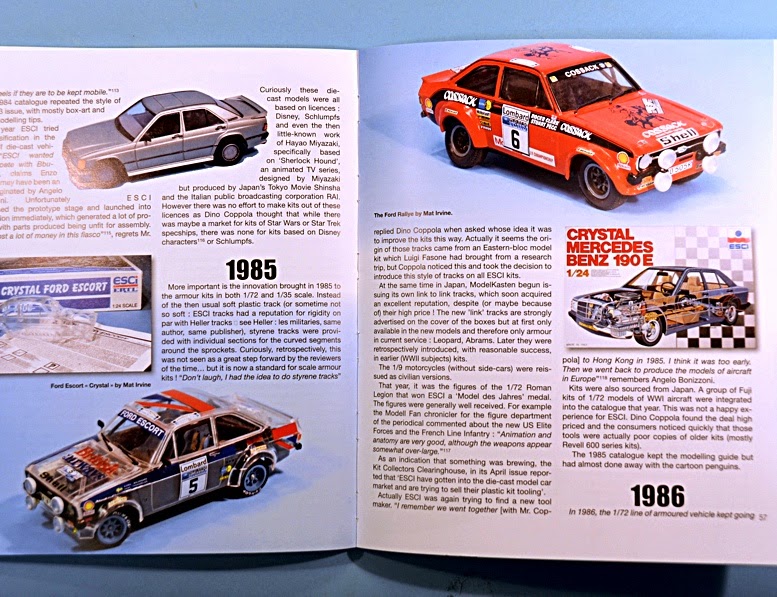 Summation
A worthwhile and fact-packed book from France. As JC says near the end, “If ESCI as a name is dead, the tools survive and are not forgotten.” The 82-page book is fully illustrated throughout.

Click here for discount prices on the ESCI book.

JC at a UK Scale ModelWorld show (below). He often attends these, as part of IPMS France. 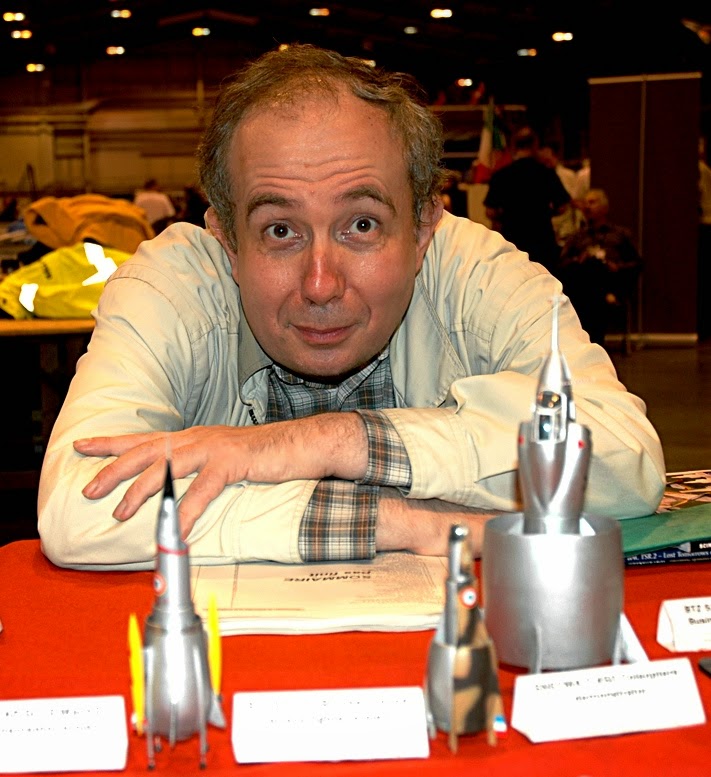