RIDE OF THE VALKYRIE: MACH 3 NUCLEAR SUPER-BOMBER FROM LINDBERG 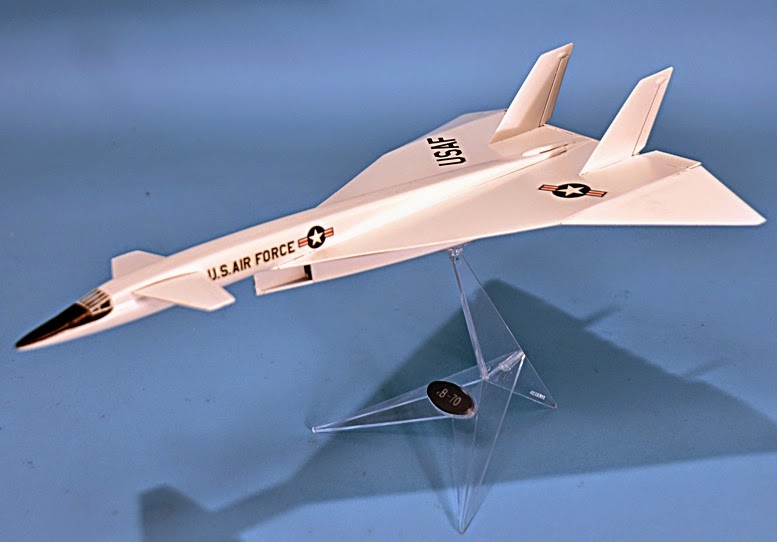 This is a Round 2 reissue of an original ‘Lindberg line’ kit, one of the first since the R2 takeover of Lindberg (and Hawk) in 2013.


Mat Irvine: This kit was made by Lindberg early on in the development of the aircraft, and is made in a ‘fit the box’ non-conventional scale, as was the style of the time. The original box did state, in standard engineering terminology, ‘Scale 1 inch = 14 feet 4 inches’, hence the 1:172 scale oddity. 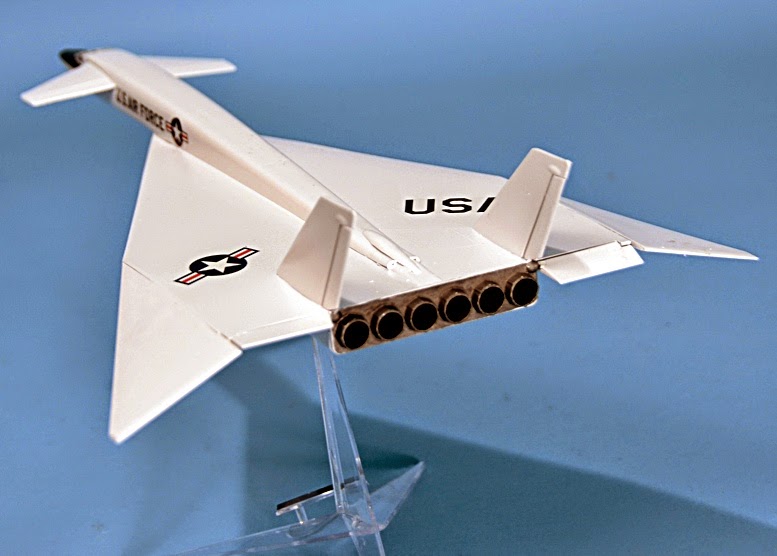 The kit first appeared in the very early 1960s, and supplies a retractable undercarriage with folding doors, though frankly, unless you really want this feature it’s best to cement the doors in place and finish the model in flight mode, supported by the supplied stand. The latter, somewhat ironically, given the simplicity of the kit itself, consists of six pieces, whereas these days, two would probably suffice! 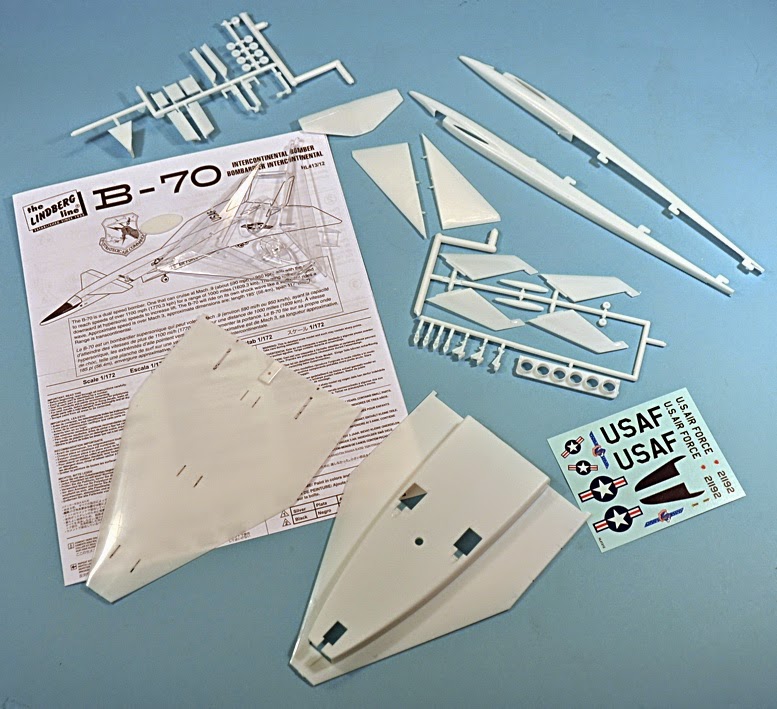 The construction is very simple, with the vast main delta wing being supplied in upper and lower halves, while the slender fuselage, plus the canard wing, fits onto this. Toward the rear are two fins, with - if you wish - working rudders. At the tail, an engine plate, with nozzles for the six General Electric jet engines, holds the elevons in place. These also work if you so wish, and can be positioned as required. 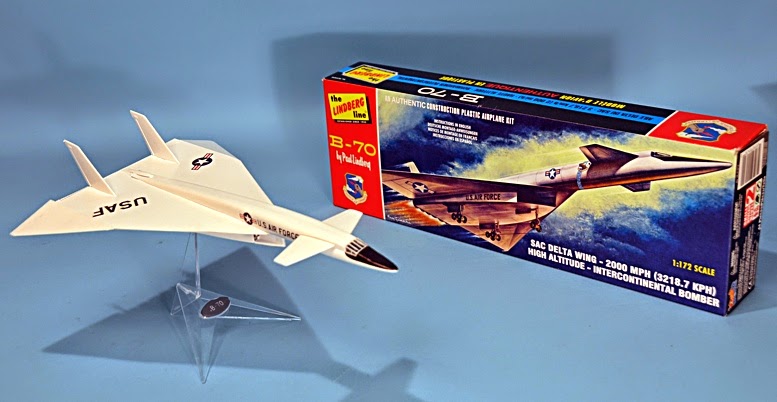 Overall colour of the only two XB-70s that were actually built was white, the only break in this being a black area in front of the cockpit, and metallic shades for the engine nozzles. The tyres, if you build the kit with the landing gear down, are actually silver-grey (as are SR-71 tyres) not the more usual black rubber finish. 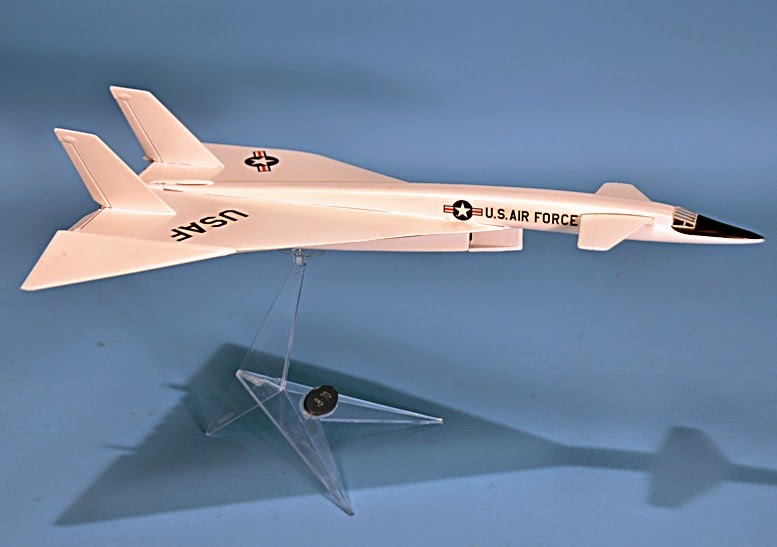 The supplied decals reflect the early nature of the kit’s original references, as ‘USAF’ is the wrong size, and the number supplied, ‘21192’ is not correct for either aircraft. The ‘US AIR FORCE’ decals are also indicated to be placed in the wrong position. As shown, they are shown under the main wing, whereas on the XB-70 they were aft of the canard wing, on the main fuselage - but again, it is because the kit was produced before the real thing actually flew. 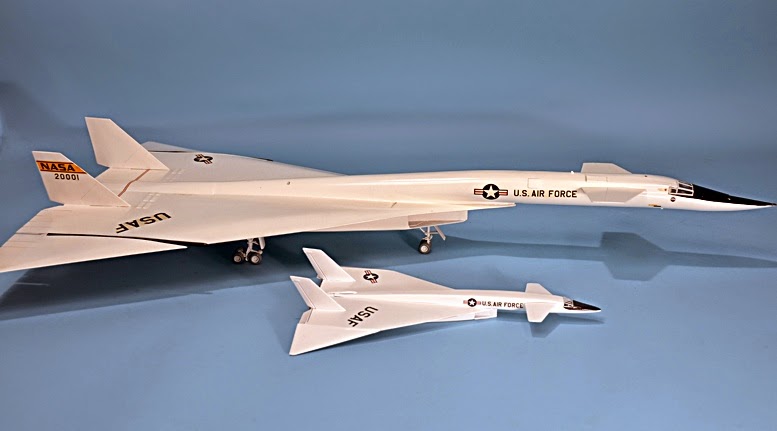 Overall, what you are really building is not a model of the XB-70, but of an early design for a production B-70. This of course still happens. Kits were made of early versions of the F-117A, F-22 and F-35, all of which had to be altered when the planes actually made it to the production line. But for a piece of model-kit nostalgia, and if you have limited display space, these early kits do have a charm of their own, and can be historically interesting, too. 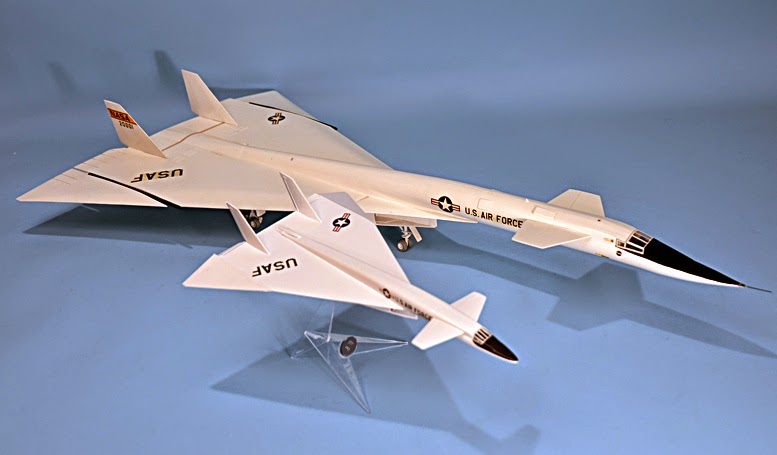 Somewhat ironically, this Lindberg kit, and a similar one from Aurora to a slightly larger scale and from around the same period, were the only mainstream kits of the Valkyrie until more recent years. Then AMT added a 1:72 scale kit to its growing range of large aircraft, to go with its car kit and science fiction kits. But due to one of those quirks of fate, the tooling for this wasn’t included when Round 2 acquired AMT. 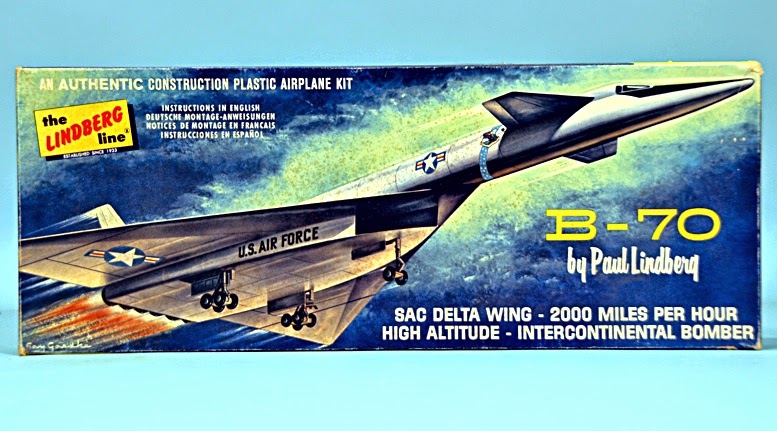 Original Lindberg box (above) with new red-stripe Round 2 version (below) still in its shrink-wrap cellophane protective covering.

It would appear that the XB-70 tooling was absorbed with the Esci line, but the Esci tooling moved to Italeri, and didn’t become part of Round 2. So you can still get the AMT 1:72 scale XB-70, but it is in an Italeri-labelled box. It’s a big kit - nearly 1000 mm (39 in) long, so requires suitable shelf space. Slightly smaller, and If you can work with resin kits, Anigrand makes one to 1:144 scale. Even so, it still measures some 450mm (18 in) from nose to tail, longer than many 1:72 scale aircraft kits. 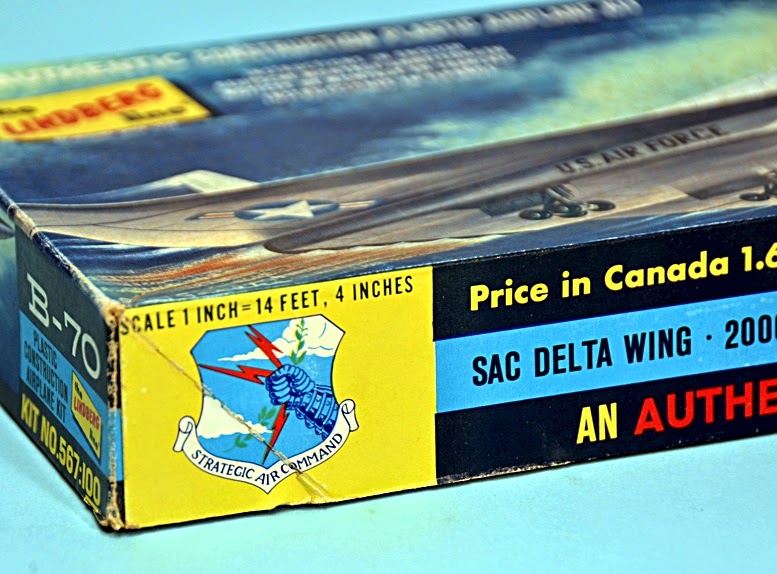 Note the scale reference in the original box (above.). Old and new boxes (below) reveals that the latest one has a metric speed conversion added. 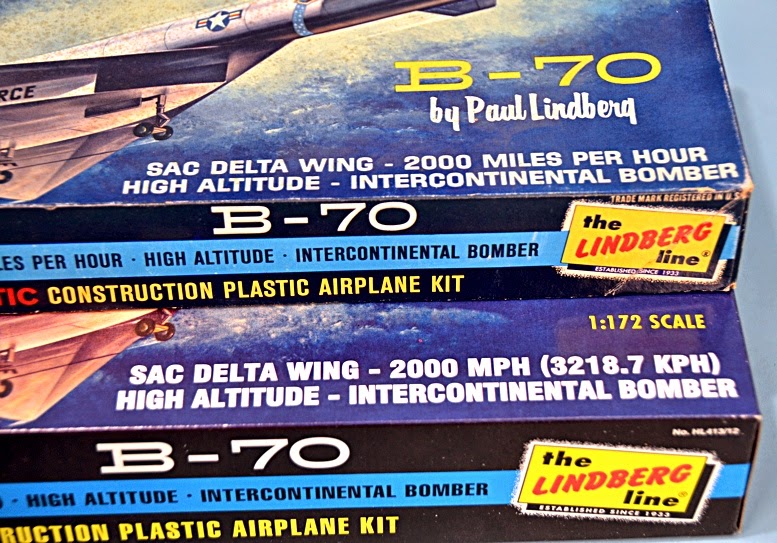 Summation
Weird scale, but a fascinating kit of a highly advanced supersonic bomber. 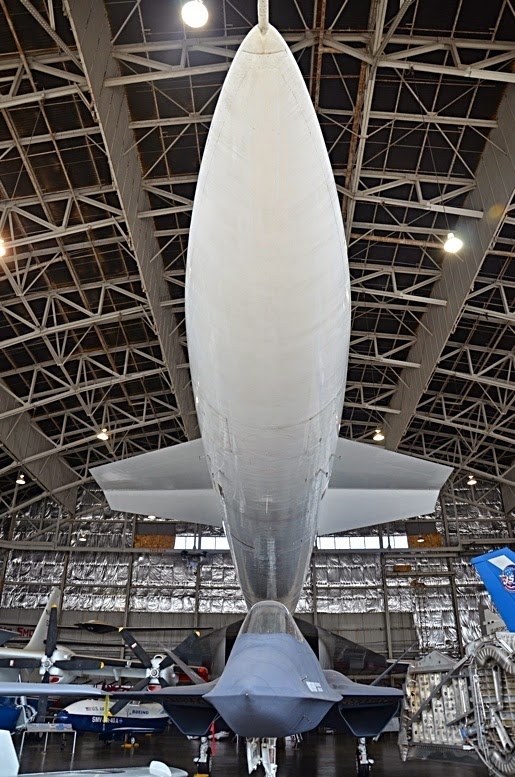 The real thing
The B-70 Valkyrie was designed by North American Aviation as a long-range high-speed bomber in the late 1950s. But the arrival of accurate long-range ballistic missiles meant that the day of the high-altitude strategic bomber was passing. Just two XB-70s were built, with fin numbers 20001 and 20207. First flight was in 1964 and the two craft achieved many records. Fastest speed was just over Mach 3 and one flight maintained this speed for over half an hour.

On June 6, 1966, disaster arrived when XB-70 20207 was flying in formation for a photo-shoot with four other aircraft. One of these, a F-104 Starfighter, got too close and clipped the XB-70’s starboard wing. The F-104 rolled onto the back of the XB-70, sheering off both fins of the larger plane and damaging the other wing. The F-104 plunged to the ground killing its pilot, while the XB-70 shortly went into a spin and crashed. The co-pilot was killed, though the pilot managed to eject. 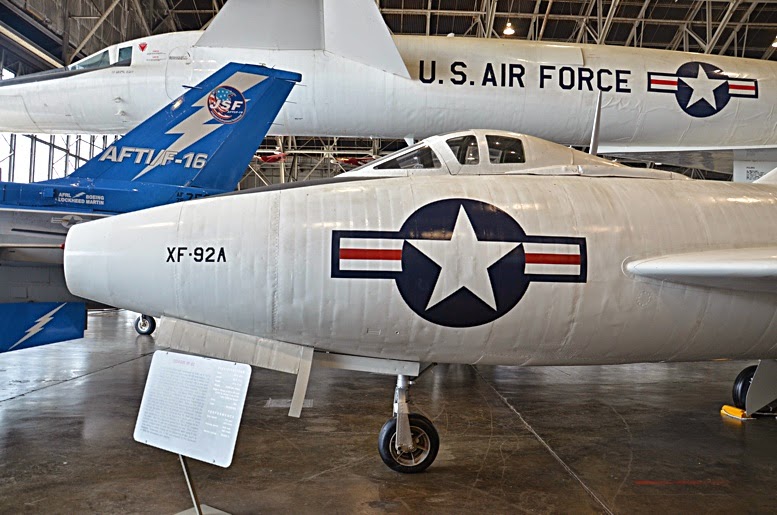 The other XB-70 prototype, 20001, was taken over by NASA, and flew on research missions until its eventual retirement in 1969. It is now on display (above, below) in the USAF Museum in Dayton, Ohio, dwarfing aircraft, such as the XF-92A (above) in the same hangar. 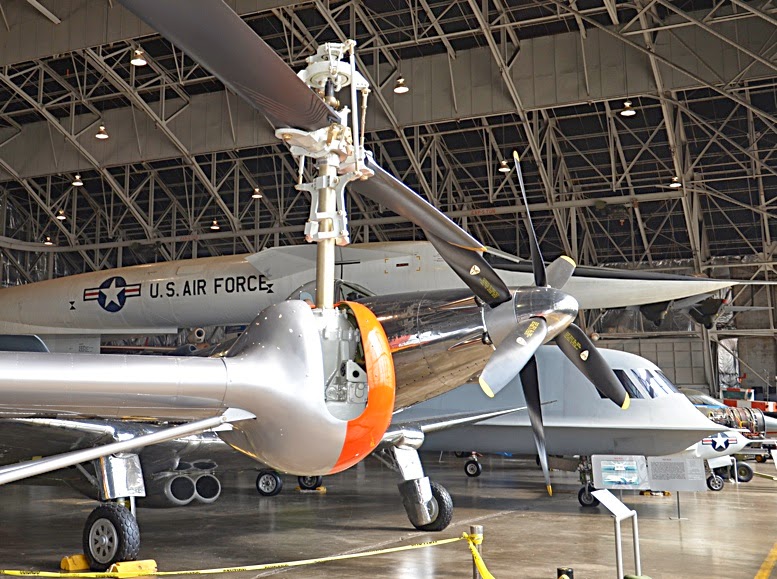 XB-70, seen (above) in the background, behind the wing rotor of the Bell XV-3 of 1955. The Fisher P-75A Eagle with its contra-rotating props is just behind. X-24B lifting body research vehicle (below) under the XB-70. 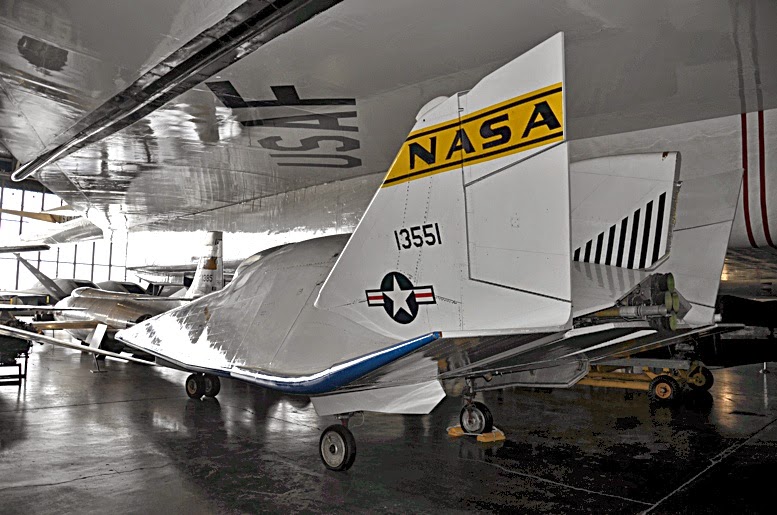 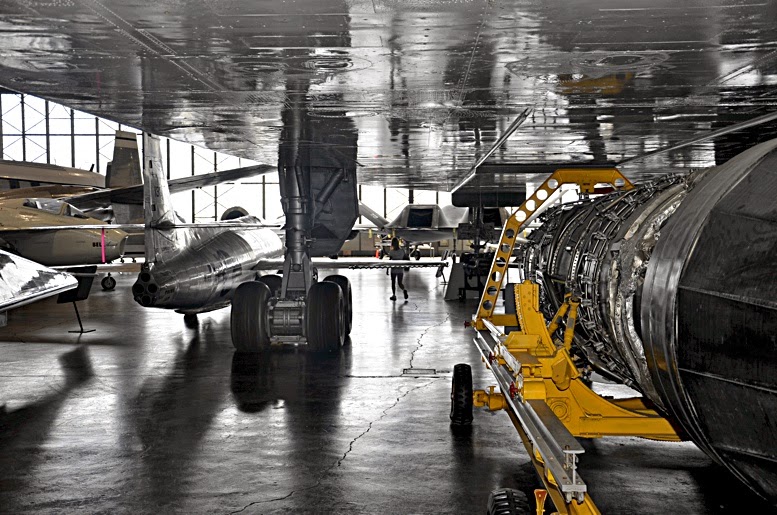 Looking forward (above) note the extended port main wheels. The XB-70 brings up the rear (below) while the Bell XV-3 is at front left. 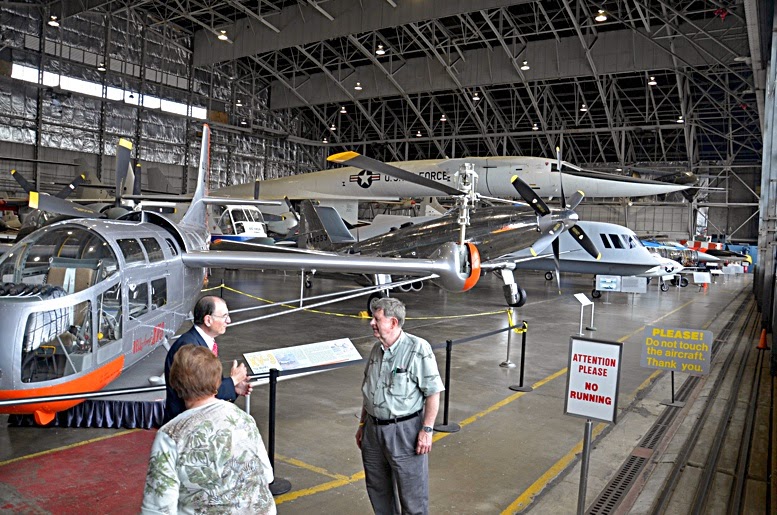 The XB-70 port main undercarriage, showing the silver-grey tyres (below). The Bell X-1B rocketplane is just behind. 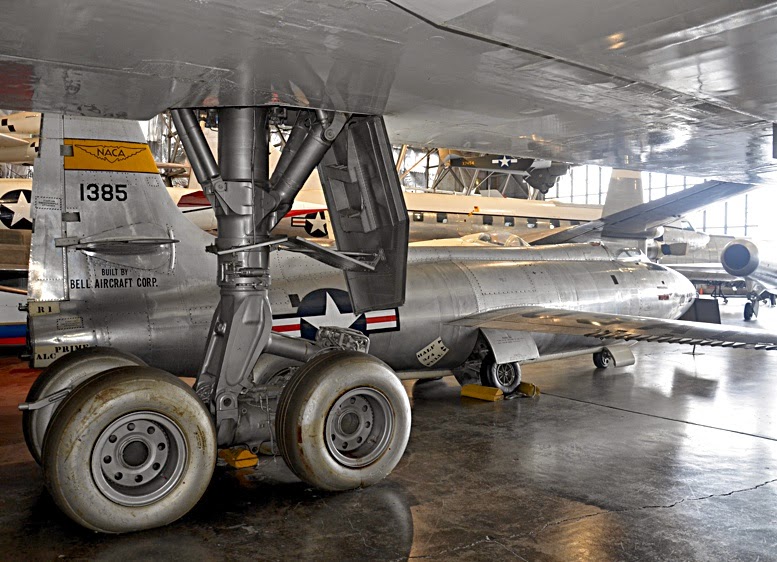