With Poland seemingly worried about possible Russian moves after the Ukraine and Crimea, this concept for a stealth tank looks well timed. It also makes a fine subject for a kit bash.


SMN report: This is the PL-01, a three-crew 35-ton concept tank that can hide from heat-seeking infrared missiles, thanks to an advanced defensive skin of thermal tiles that can change their temperature to match the local environment.

The PL-01 was designed by OBRUM, Poland's military weapons development group, and shows that there is advanced thinking going on in this former satellite of the old Soviet Empire.

The idea behind PL-01 is to reduce or eliminate the infrared, radar, and visual 'signature' of the traditional tank. Backing this up are the design's other features - high mobility, huge firepower, and good protection for the tank crew. The PL-01 is not the first OBRUM design - the Anders multi-role combat vehicle (below) was shown in 2010. 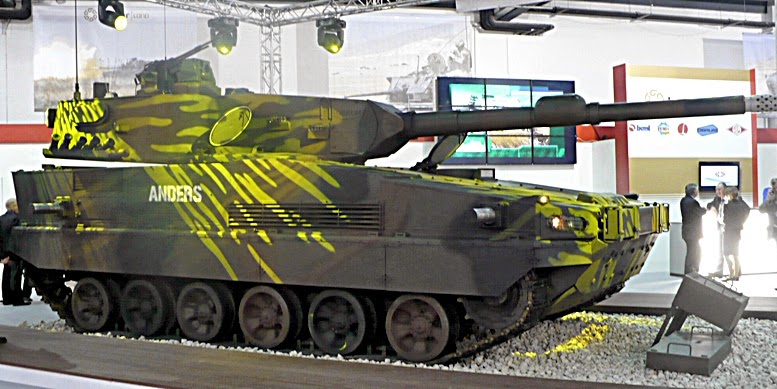 On to kit-bashing, then. Well, there is no kit of the PL-01 available, more's the pity, but the stealthy planar design means that cutting out sections from plasticard sheet shouldn't be too difficult, so the question is what sort of base tank to start with.

The Swedish S-tank looks a good starting point. It already looks quite futuristic, though there is no turret. Uniquely, the 'S' is designed to aim its gun by digging in and moving its tracks from side to side. For a PL-01 lookalike, you need to add a turret onto the S-tank's hull, and that means something like a German Leopard.

There are plenty of Leopard kits around, and some of the bigger ones can be bought as ready-made RC systems. Complete fidelity doesn't matter too much, as you're going to cover the structure with a new one that looks something like the PL-01. The OBRUM design is a concept only, so there's no need to be slavish over the work - the important thing is to end up with a convincing future tank that has more than a hint of stealth to its appearance.

Of the S-tanks around, the new-tool Trumpeter kit is a good one. It's to military-model standard 1:35 scale, is highly detailed, and has 263 components, moulded on five runners, with Swedish Army decals.

Click below for radio-control and kit tanks. Note the German Leopard and Swedish S would make fine bases for kit-bashing this stealth AFV.

Here's another interesting video (below) that fills in some background where OBRUM's impressive development work is concerned.