POLIKARPOV I-16 FLIES IN NEW ZEALAND 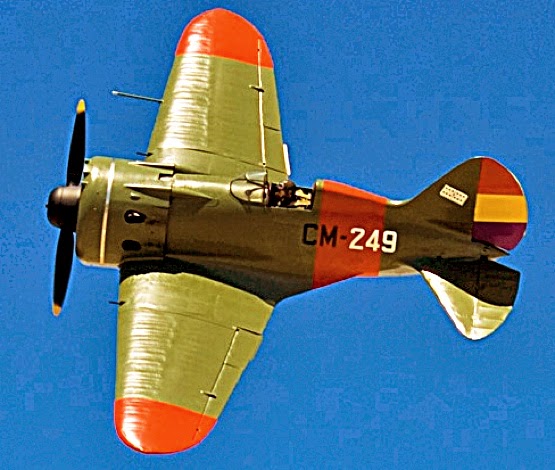 This video shows the first public display of a rebuilt Polikarpov I-16, as flown at the Wanaka Air Show, New Zealand, in 1998.


The pilot was Mark Hanna, who sadly died the following year from injuries sustained in a landing accident near Barcelona, Spain, in a Hispano Buchon, a licence-built version of the Messerschmitt Bf 109.

About the real thing
The Polikarpov I-16 was a revolutionary design: the world's first operational low-wing cantilever monoplane fighter with retractable landing gear.

The I-16 was introduced in the mid-1930s and formed the backbone of the Soviet Air Force at the beginning of World War II.

The I-16, nicknamed ‘Ishak’ (Donkey) by its pilots, saw plenty of service before World War II. It flew in the Second Sino-Japanese War, at the Battle of Khalkhin-Gol, and also in the Spanish Civil War. In that conflict the plane was named Rata (Rat) by the Nationalists, and Mosca (Fly) by the Republicans. Yet another nickname came from pilots in the Finnish Air Force, who called it the Siipiorava (Flying Squirrel).

The I-16’s flight controls were light and sensitive, an aileron roll taking less than 1.5 seconds. However, it had poor visibility, and you couldn’t fly it hands-off because of the light controls. Even so, the I-16 was a reliable machine and was manufactured in big numbers - some 8644 were made.
Email ThisBlogThis!Share to TwitterShare to FacebookShare to Pinterest
Labels: Polikarpov i-16, Ray Hanna
Newer Post Older Post Home