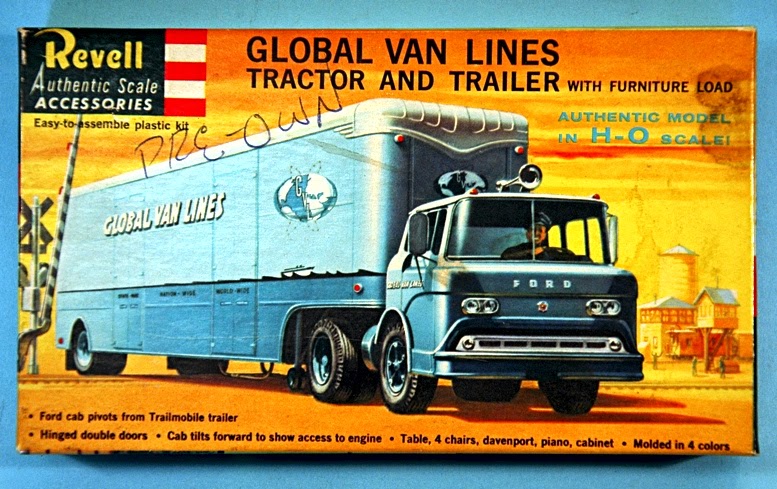 
Mat Irvine: The Chicago Toy Fair (far better known as the Kane County Toy Fair) is a venue where you never quite know what you will find. In fact, I’m often asked, “What are you looking for?” to which I can only reply, “I’ll let you know when I see it!”

The header pic (top) shows late-1950s Revell retro box-art at its finest. Unfortunately, the words 'PRE OWN' have been scrawled with ball-point, but they can probably be camouflaged.

The box and a Humbrol paint tinlet (below) provide a sense of scale - it really is quite a small kit. 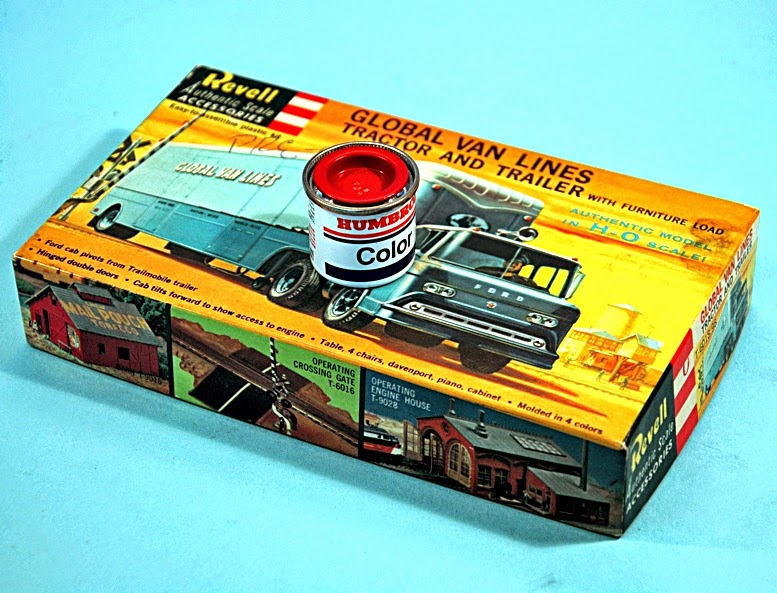 The Revell Global Van Lines Tractor and Trailer kit to 1:87 (H0) scale is a typical example of a lucky find, a little gem that turned up quite by chance, and although I’m hardly an H0 builder or collector, this one really wins, if only for the nostalgic box-art. The kit was also priced at a very reasonable $10 USD, although I got the seller down to $8 USD. I did feel slightly guilty at doing so, but Kane County is all about bartering!

What you get in the box (below) - instructions, decals, and components in four shades. 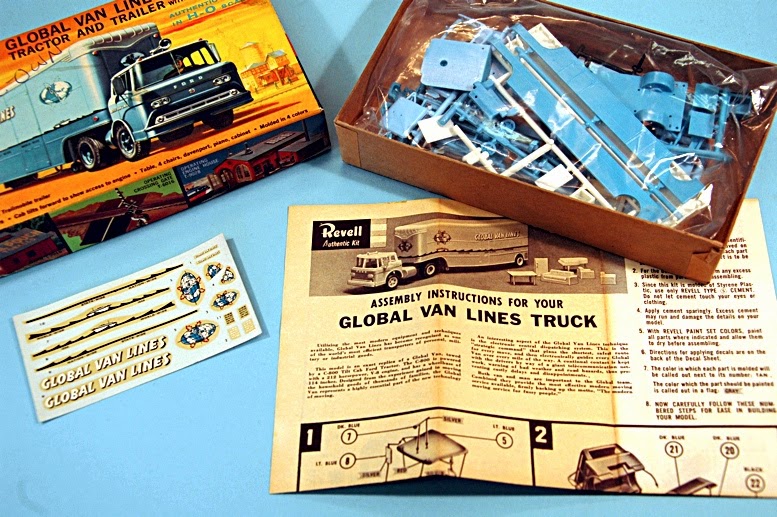 When the kit was released - this one is dated 1959 - American model companies making items for American railroad modellers was standard fare. Being in H0 scale (1:87) the kit - even as a truck and trailer - is tiny. When built, it is only about 150 mm (6 in) long, but consists of 60 components, and is packed with detail. It is also moulded in four colours - white, black, dark and light blue - plus a full-colour decal sheet, and even a driver figure. 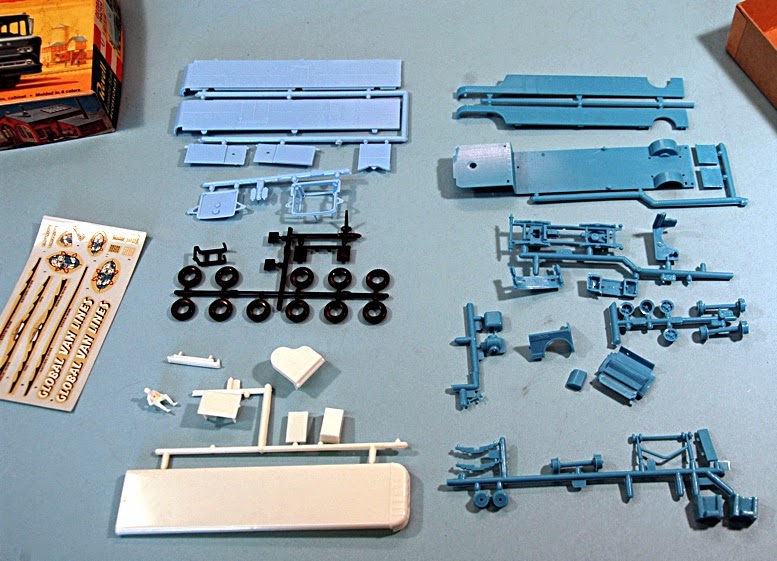 But what is probably most amazing is that you get not only the tractor and box trailer, but also some household items, ready for removal. Included in the kit is a refrigerator, a table, a three-piece furniture suite, and best of all, a grand piano. Those were the days. 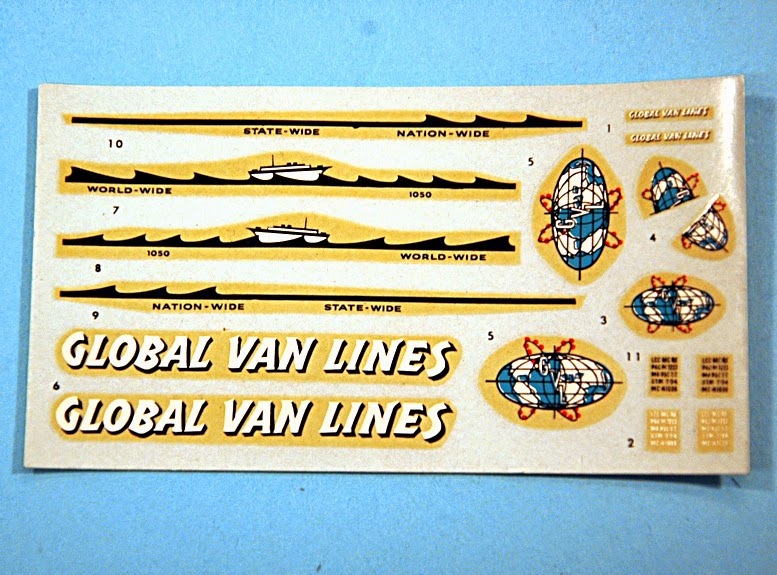 And here’s the load (below). Two seats in blue, the fridge (on runner), table, and grand piano in white. Unfortunately, my buy did not include the three-seat sofa, labelled part number 43 in the instructions. 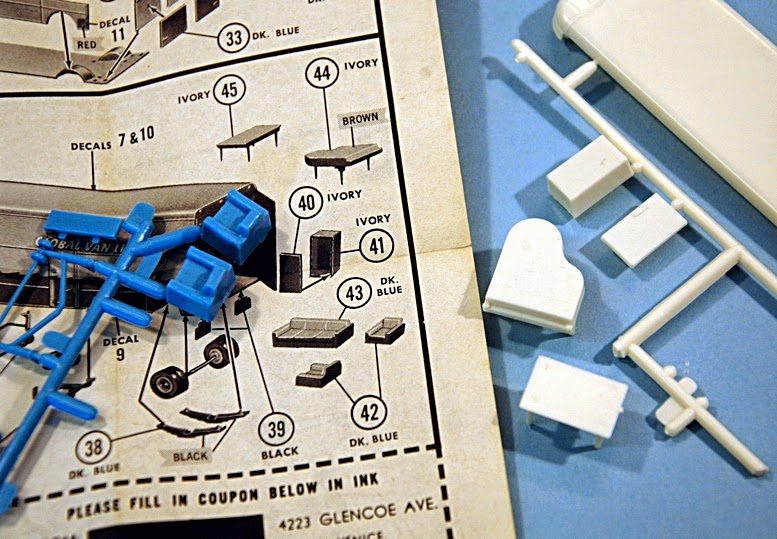