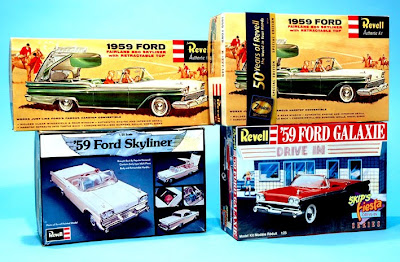 Those wonderful 1950s-era US cars sometimes had more than wings and chrome to set them apart from common or garden designs from other countries.


Mat Irvine: The Ford Skyliner was one of those automobiles, for it came with one of the best mechanised foldaway tops made. At a time when the average convertible made do with soft canvas, attached with a variety of awkward clips and grips, all the Skyliner needed was the touch of a button.

The Skyliner’s folding system was extraordinarily complex, involving no less than seven motors, ten power relays, eight circuit breakers and nearly 200 m (600 ft) of wiring, all to move the hardtop roof completely in and out of the trunk. The videos (below) demo the lot in working order.

The car was such a splendid machine that model company Revell jumped on the bandwagon and made a plastic kit. The pix (below) of the model are from my collection. The sequence (below) shows the model Skyliner's up, over, and down operation in detail.

The Skyliner was produced from 1957 to 1959, and Revell made a kit of the last year of production, with a completely working roof. OK, you had to move it by hand, but given that this was produced in the early years of model kits, it was a masterpiece of miniature engineering.

The kit has been reissued a few times over the intervening years, including the ‘Skip’s Fiesta Drive In’ series and was later reissued in the Selected Subjects Program Phase 9 (Winter 1995). Revell-Germany’s 50th anniversary range also featured the car, so examples could still be around.

The kit is not made at present, though you can find them on sale at eBay from time to time.

Then-and-now videos (above, below) reveal the secrets of the 'hideaway hardtop' Ford Skyliner with its retractible roof in operation.