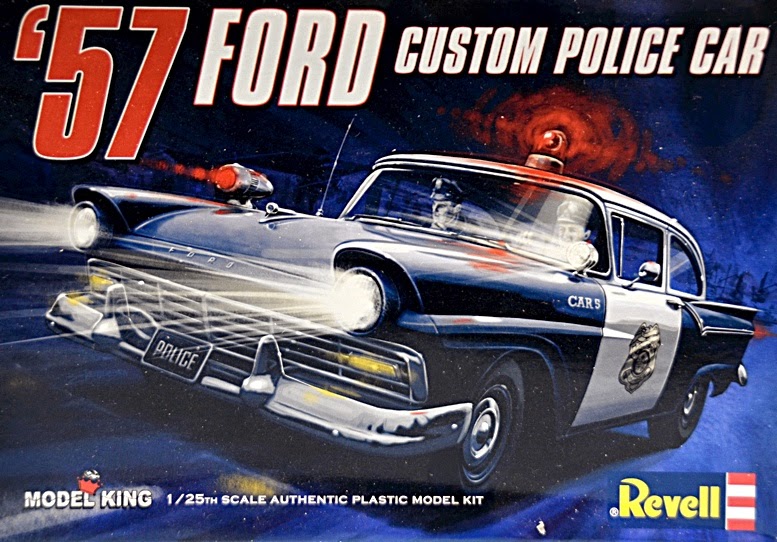 This is the third issue of Revell’s new 1:25 scale 1957 Ford Custom car kit, this time as a cop car of the period. The kit has been created in conjunction with the specialist model company Model King.


Mat Irvine: The kit is a new-tool production, the result of using modern techniques and methods such as a chassis separately moulded from the floor pan, and metal stub axles to hold the wheels. The interior is now made up from individual panels for the floor and sides, which makes painting far easier than the classic one-piece moulded tub.

Most parts (below) are moulded in white, making overpainting other colours straightforward. 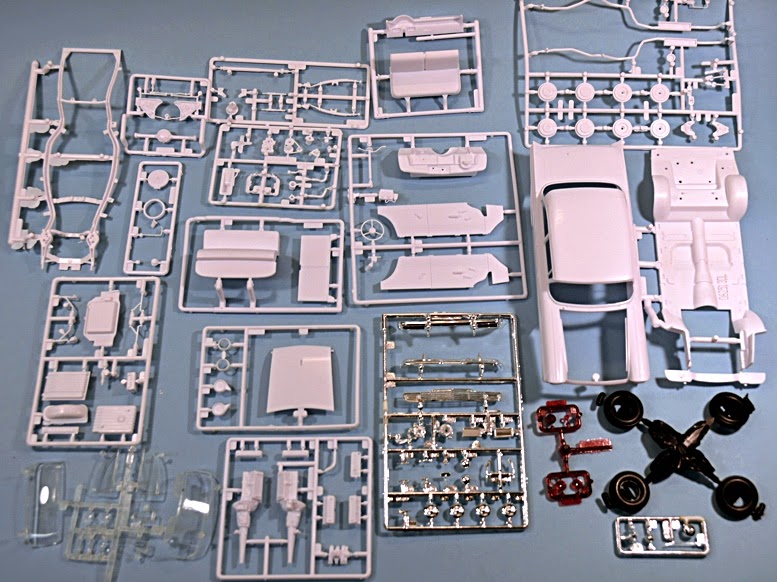 Much of the kit is identical to previous issues, so you can build it up stock, and add the police accessories at the end. However, this would tend to dictate the colours you use, so here the classic ‘black and white’ of police cars of the period, or any period for that matter, has been used. And being a black and white, it’s the white that goes on first, and it needs to dry thoroughly before any masking is attempted and the black coat sprayed on.

The white has already been applied to the bodywork (below). It was masked for the black coat only after drying for at least two weeks. 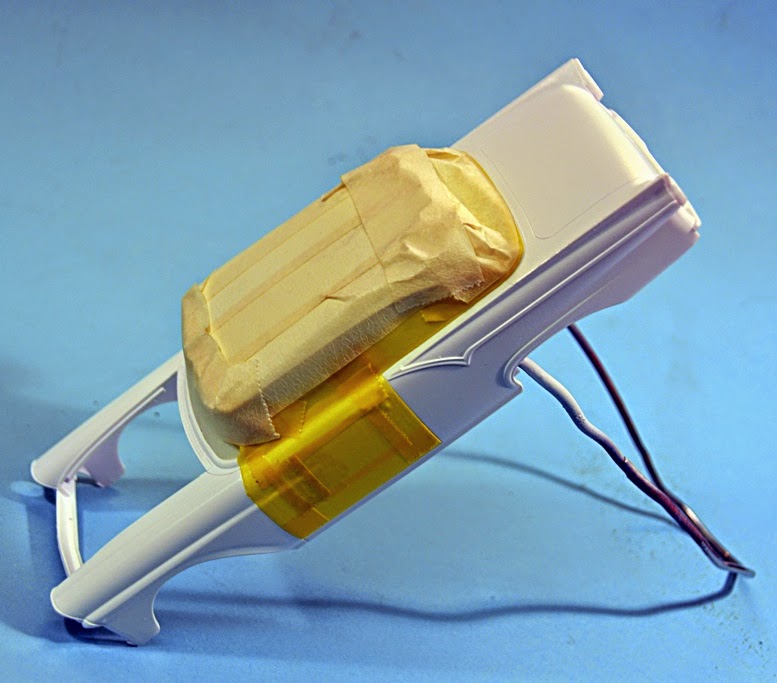 Unfortunately, you need to be patient, but you can eventually add the second colour. When you do so, remove the masking as soon as possible, as it allows the ‘line’ between the colours to blend in slightly, leaving less of a ridge between the paint layers.

Black coat sprayed on (below). 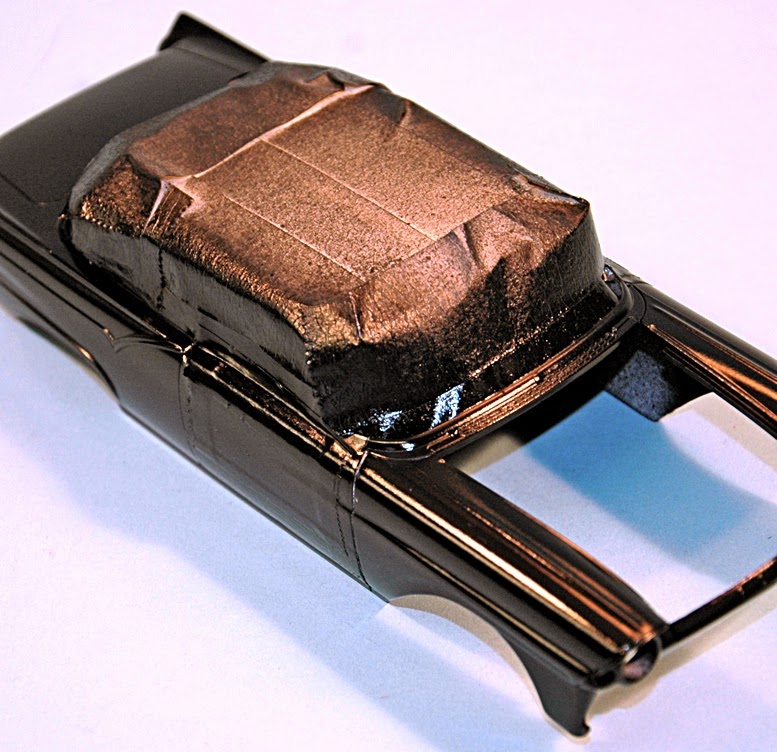 The interior comes complete with decals for the seat pattern and the interior sides. The interior handles for windows and doors, can be chromed with BareMetal Foil, and decals applied over the top. The kit has cut-outs for these in the decals, so there’s no fiddling about with a scalpel.

Details (below) of the interior side panels. BareMetal Foil has been used for the window winder and door handles. Decals have already been applied in the upper example. 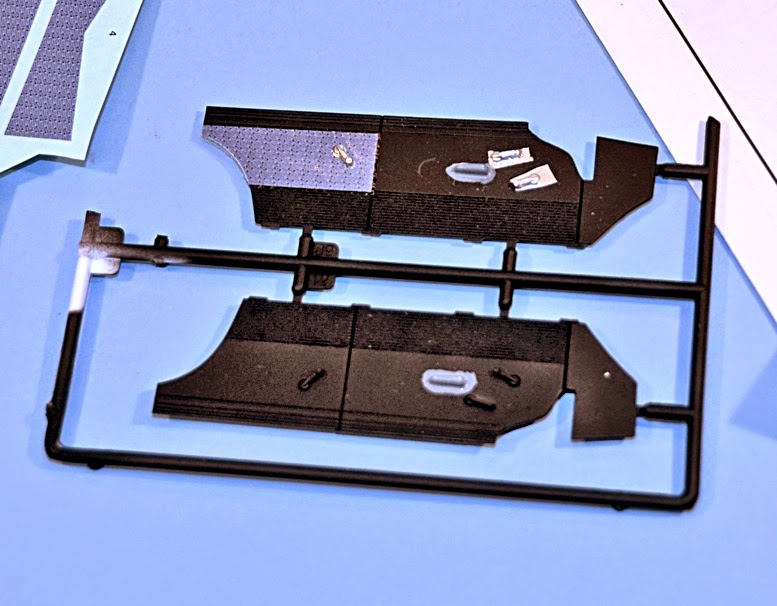 The only interior police option concession is a separate radio (below) that fits under the central dash area. There are no enormous racks filled with guns and rifles, or piles of computing equipment, cell phones, and readouts, for this kit represents a car from an earlier time! 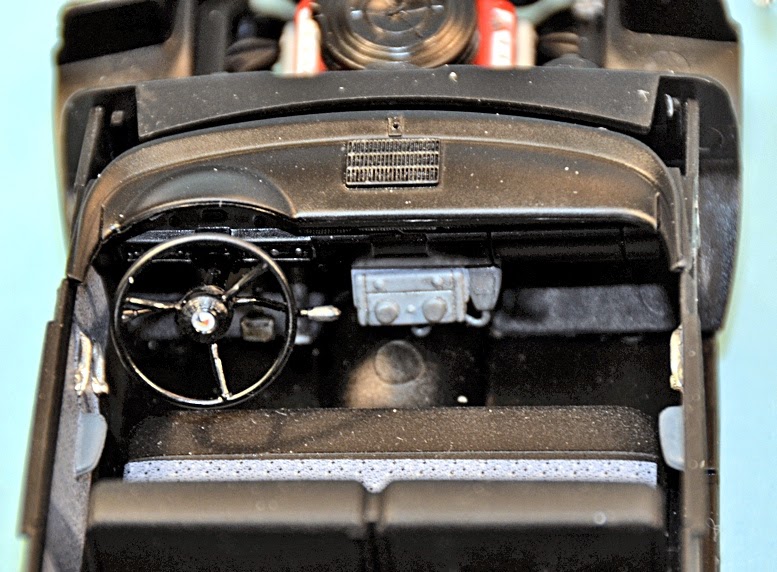 Similarly, the exterior does not have the vast flashing light bars you see today, just a classic red domelight for the roof, a unit for the fender, and a spotlight. The car is a two-door, whereas police cars usually have four, but there has to be an exception, and here it is.

The engine (below) is not super-detailed (so no plug leads) but the decal sheet provides rocker cover labels. 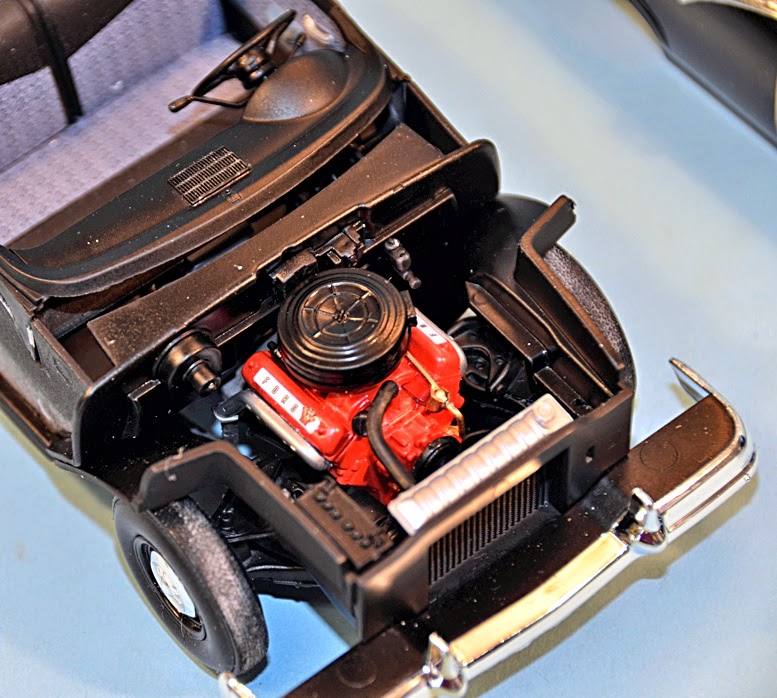 Although sold as a police car, the decal sheet is full of markings for other official cars -  Border Patrol, Sheriff, Airport Security and Fire Chief - even a Mexican police option - so you should have enough to choose from.

The completed body and rolling chassis (below) ready for final assembly. 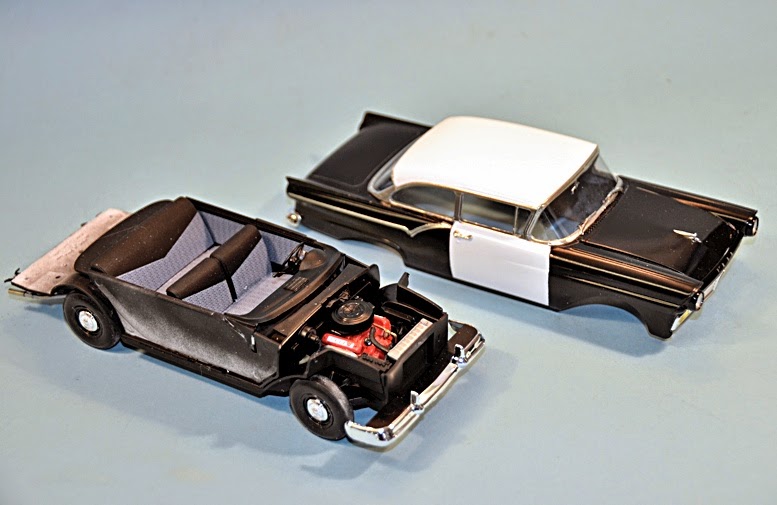 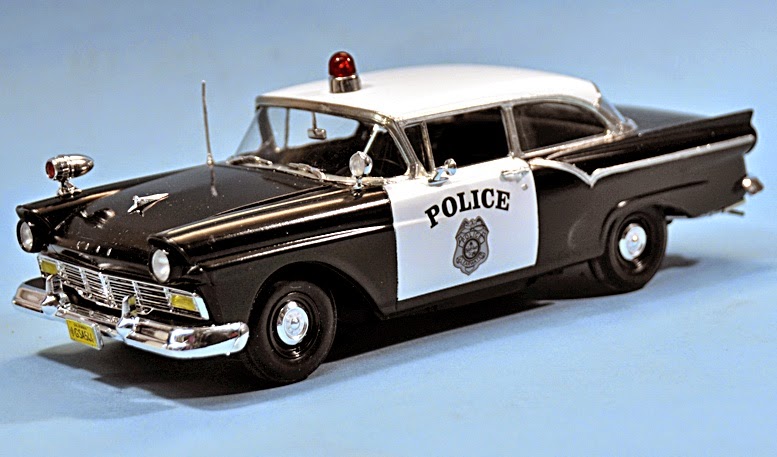 There were actually two other options in my mind when I was building the kit. One idea was prompted by the recent review I did of a scene from the movie Plan 9 from Outer Space which did not feature a police car, but did include a ‘zombie’ version of the police inspector. 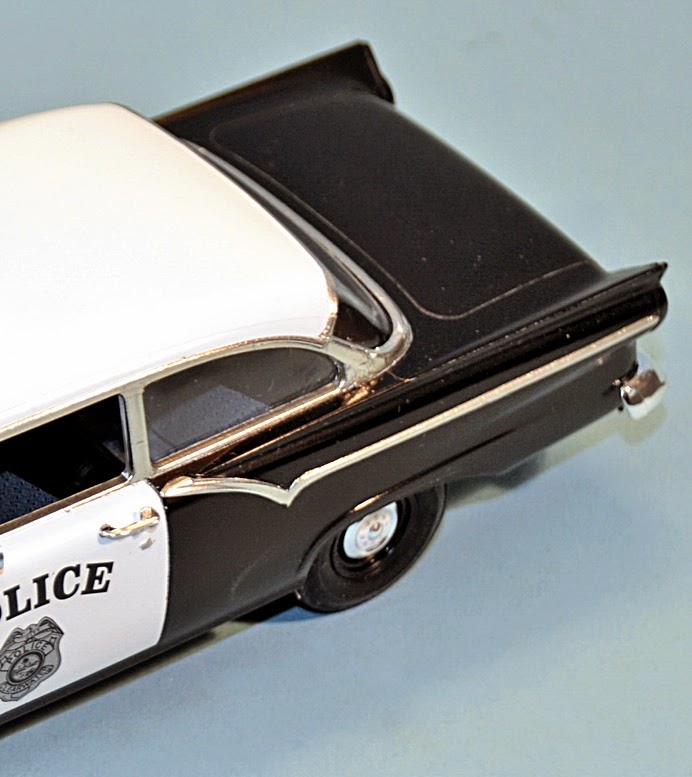 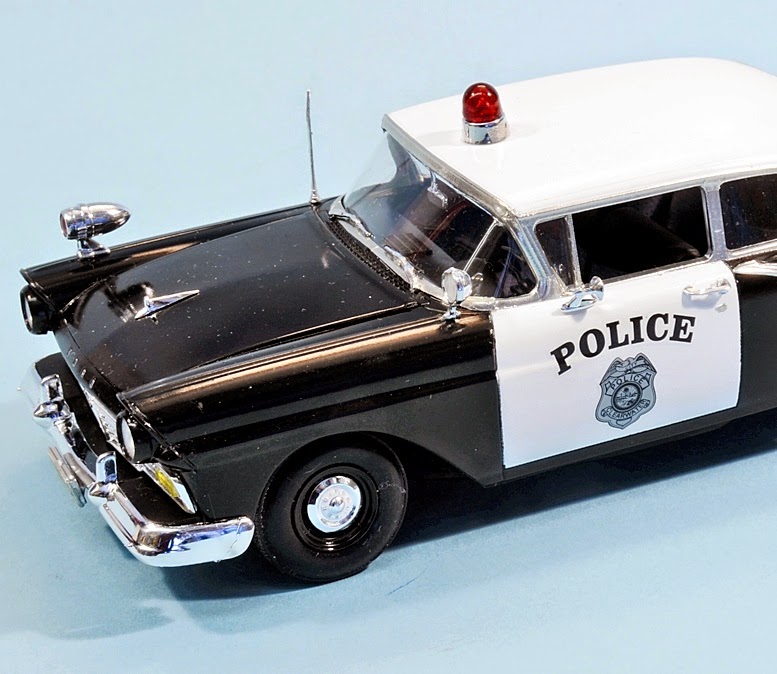 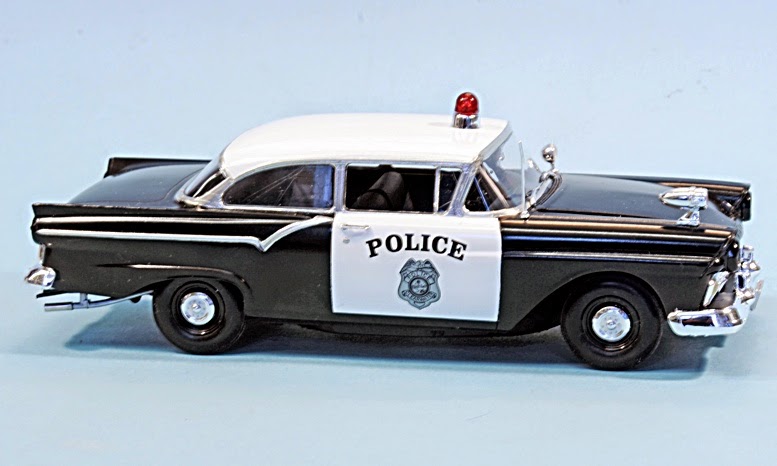 If you’ve seen the film, you will likely be aware that scenes of police cars rushing to the scene of the action defy continuity and regularly changed versions from one scene to the next. So whatever the markings are on this car, they probably would match at least one scene in Plan 9! 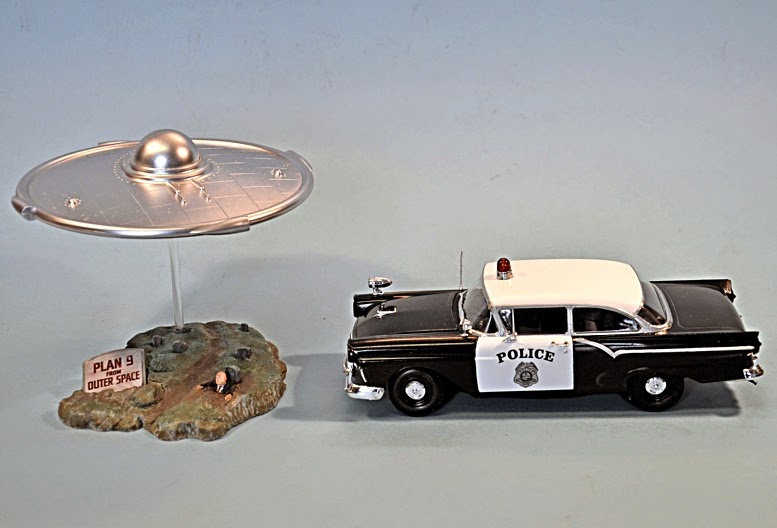 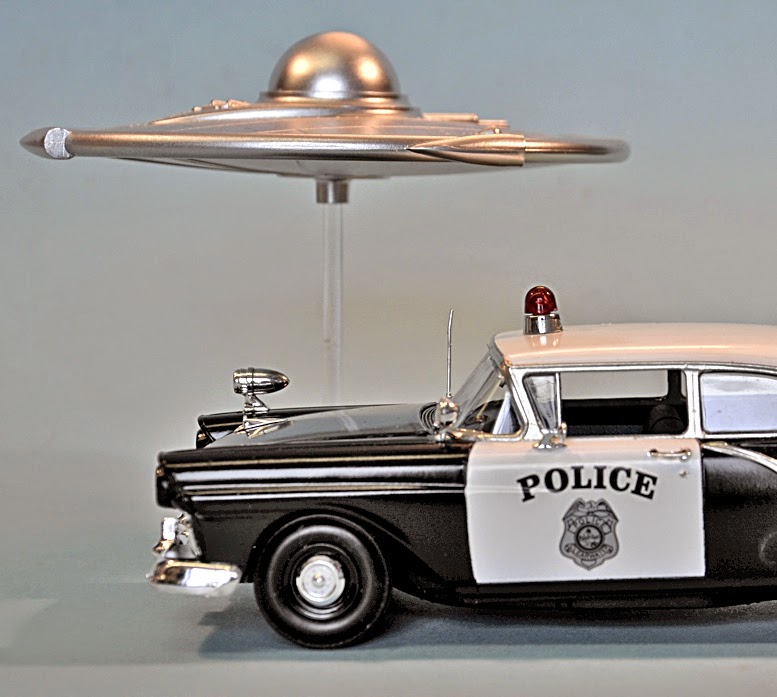 My other idea came from a classic TV cop show of the era, Dragnet, and from that series came one of the earliest Star Cars, from Ideal Toys, featuring a 1955 Ford.

It’s a very rare kit now, and is more an unassembled toy than a true model kit. It’s not exactly helped by the somewhat ungainly scale of 1:19, but is probably the first-ever model car kit to be sold as, ‘from the TV series.’ 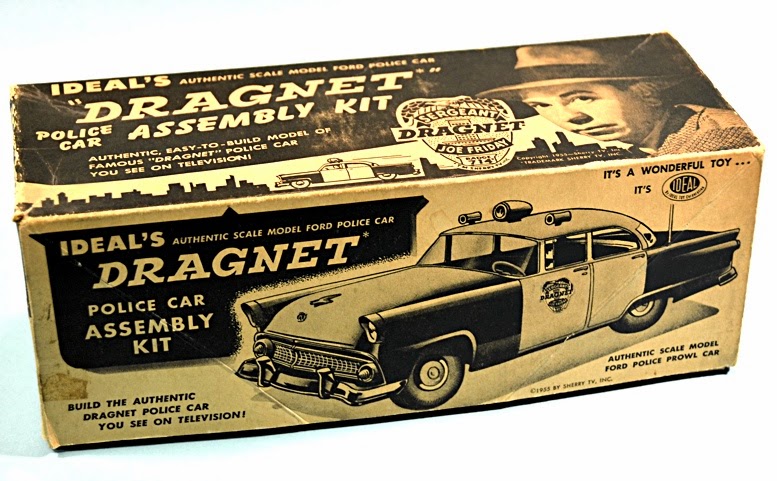 Bodies of the two kits compared (below). The Ideal Toy (left) is to 1:19 scale, the Revell kit is to 1:25 scale. However, the Ideal car does have a police-standard four-door body. 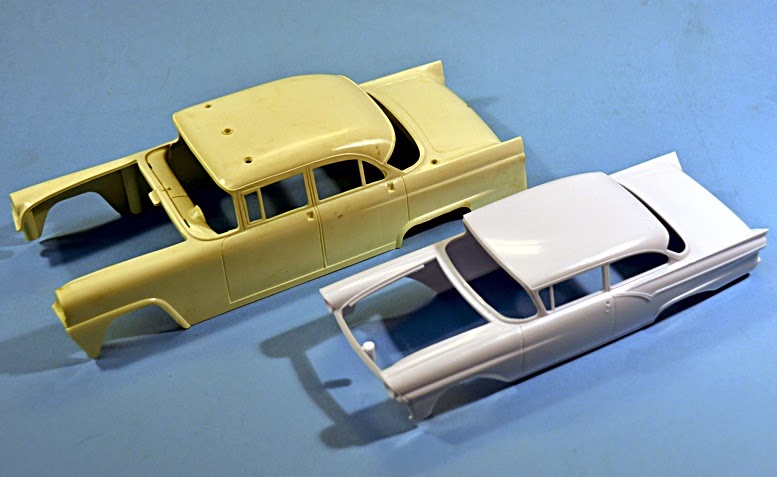 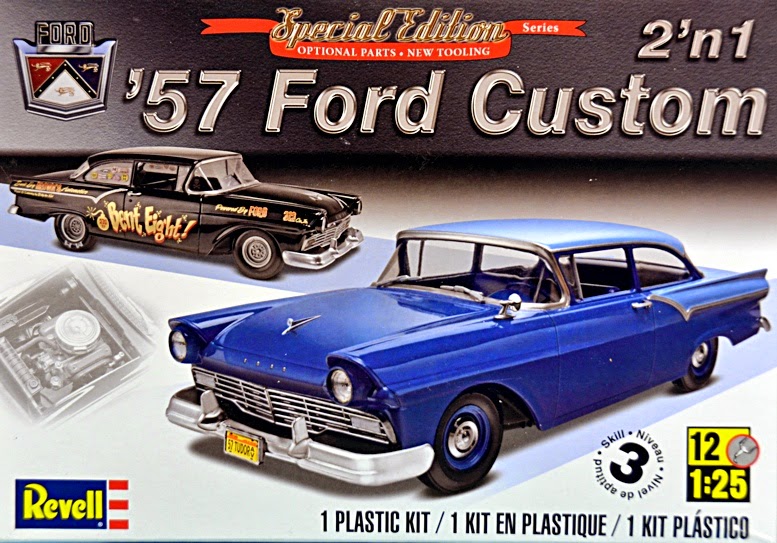 First issue (above) of the new '57 Ford kit, with second issue (below). 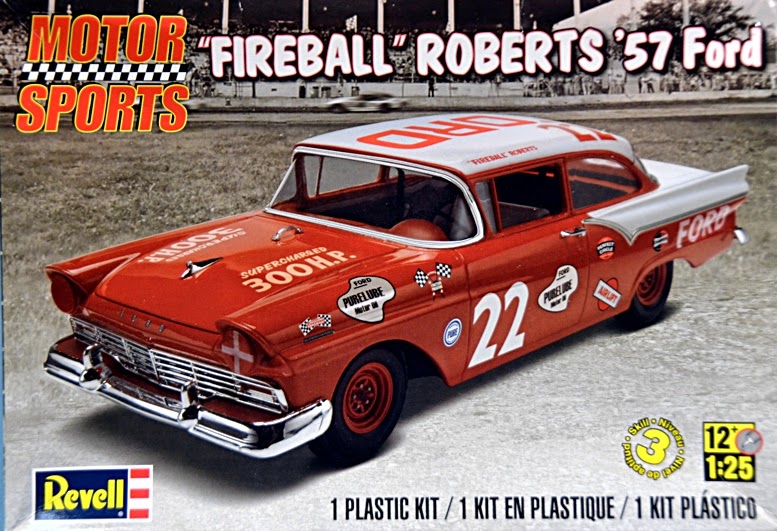