The 1:100 scale Round 2 MPC Titan IIIC launch rocket is a companion kit to the same-scale Vostok I reviewed a short while ago, and, as with the Vostok, I also helped with some technical details.


Mat Irvine: The Titan IIIC is a reissue of a kit first released in 1970, and with the Vostok, was unique in being primarily a static model, but one that could also fly with the aid of an Estes-type solid-rocket motor. I wrote the text for the box bottom (below). Well, most of it…

The flying options have been omitted on this kit, but some parts that are on the runners with other components, are still included, as with the Vostok. So there's an opportunity to add some spares to the bits-and-pieces box. You still get a chrome-plated runner with some parts, which was a feature of the Vostok kit, and is a legacy of MPC’s model car production.

The original booklet (below middle) is reproduced for this reissue. 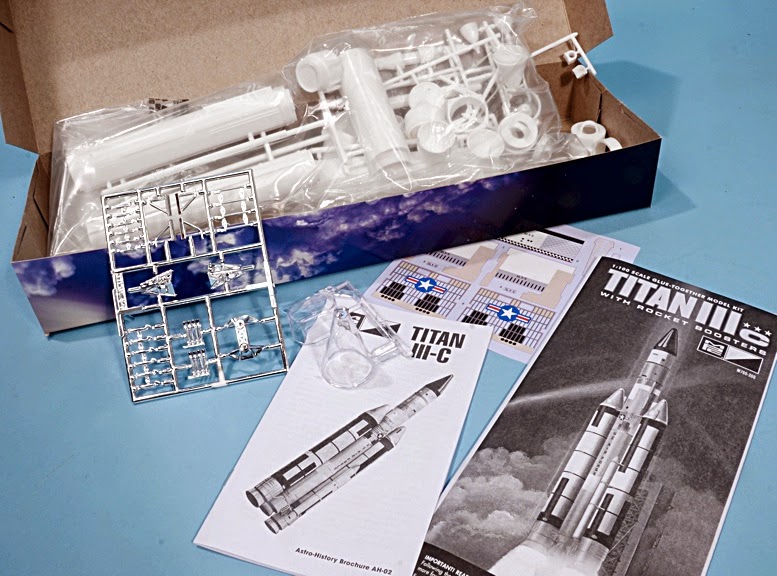 Construction of the Titan IIIC is reasonably straightforward, with two identical booster sections, and a central core. However, unlike the Vostok, which was straightforward to paint as it was basically all grey, the Titan III colour scheme is more complex, and this dictates the order of construction.

Parts layout (below). Note that this is a test shot, so the runner at bottom right has yet to be chromed. 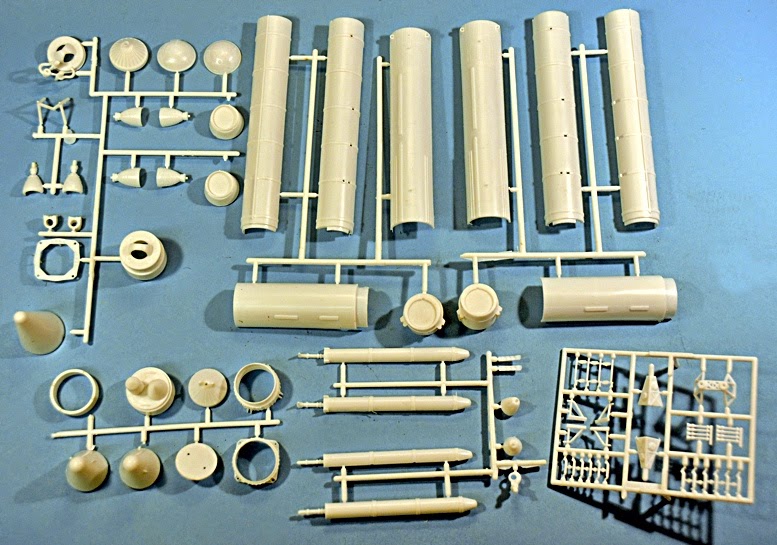 The Titan IIIC boosters are white, silver and black, while the central core uses the same colour, but in a different pattern, to which is added a section of tan colour. It is best to build up the boosters, spray-paint them white, then add silver separately to the nose cone and engine section. The circular bands are added with silver decal stripes, with black panels made from decal stock.

What a difference a decal makes. The original set (below) next to the much larger and better new sheet that is now supplied. Only the US stars and bars remain the same. The lettering is now correctly printed in black, not red. 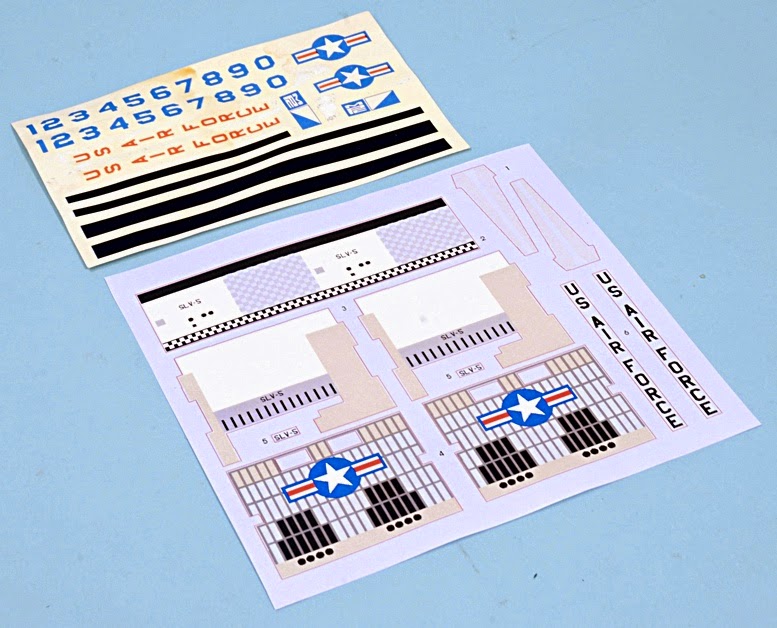 Similarly, I painted the central core in white, followed by masking and spraying various sections silver, as they are larger areas than on the boosters. One change from the original kit however is a great help, and it is that the decal sheet this time around is far more complex. This fortunately provides the complex pattern that adorn the upper section of the first stage, and much of the second stage. In earlier releases, you had to paint this yourself! 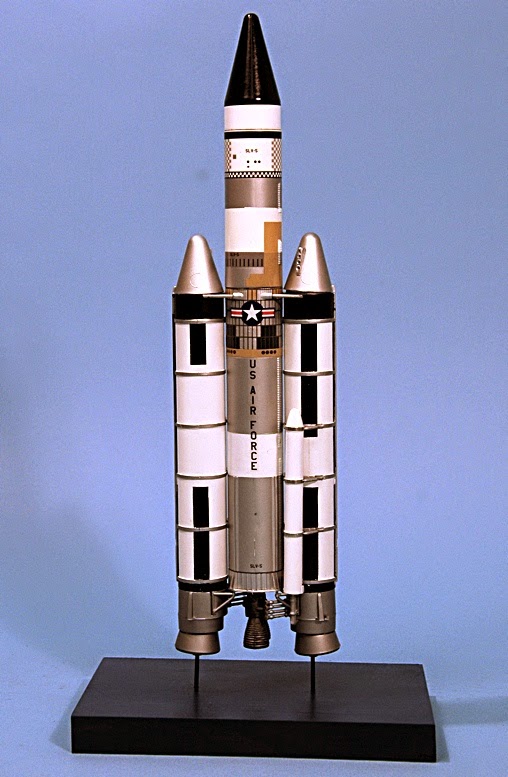 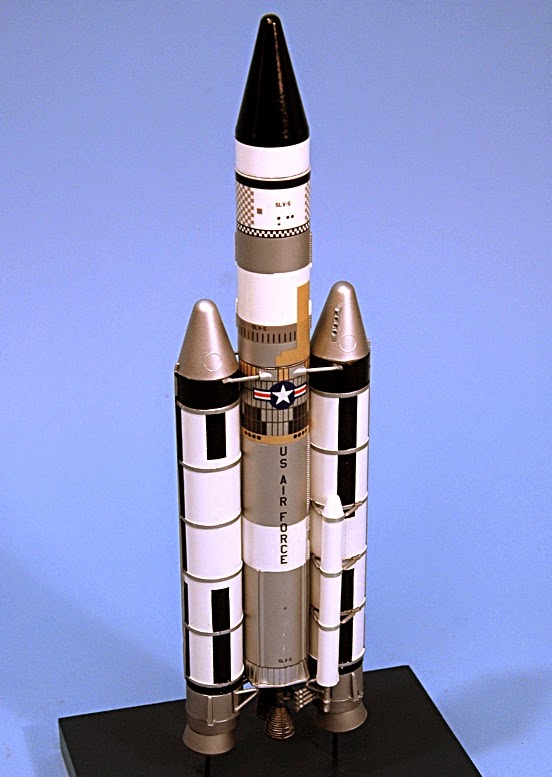 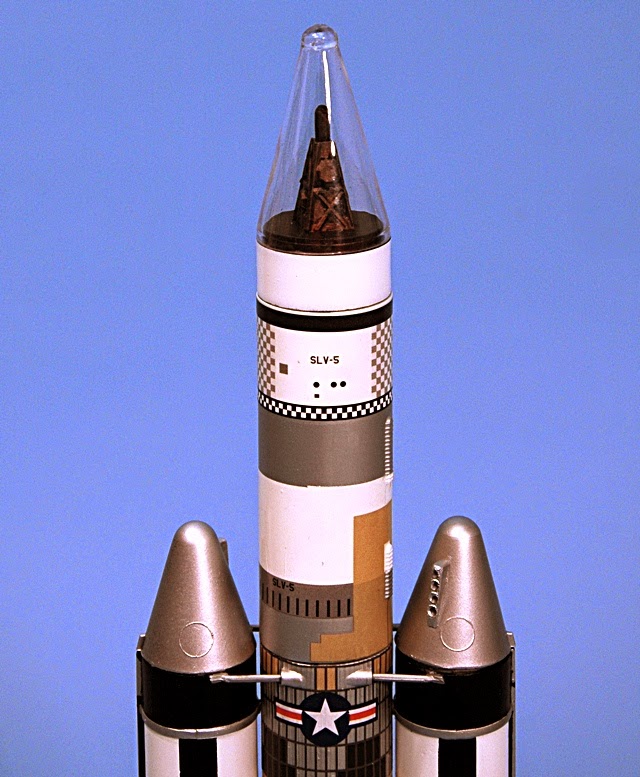 There is a representation of a satellite payload under the nose cone (above) attached to the final stage, and there is the option of using a transparent nose cone to show this off. 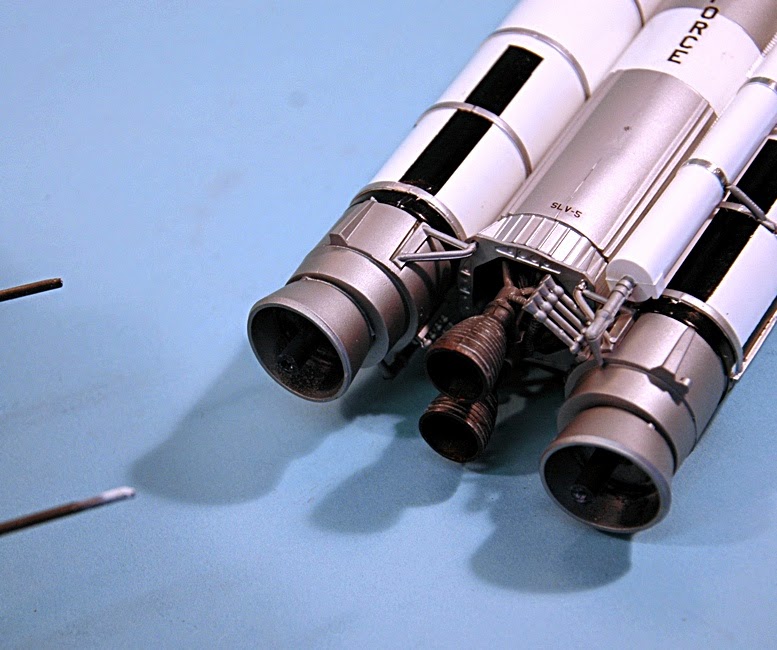 One method of support is to drill holes in the boosters, then fit them to rods attached to a wood base. 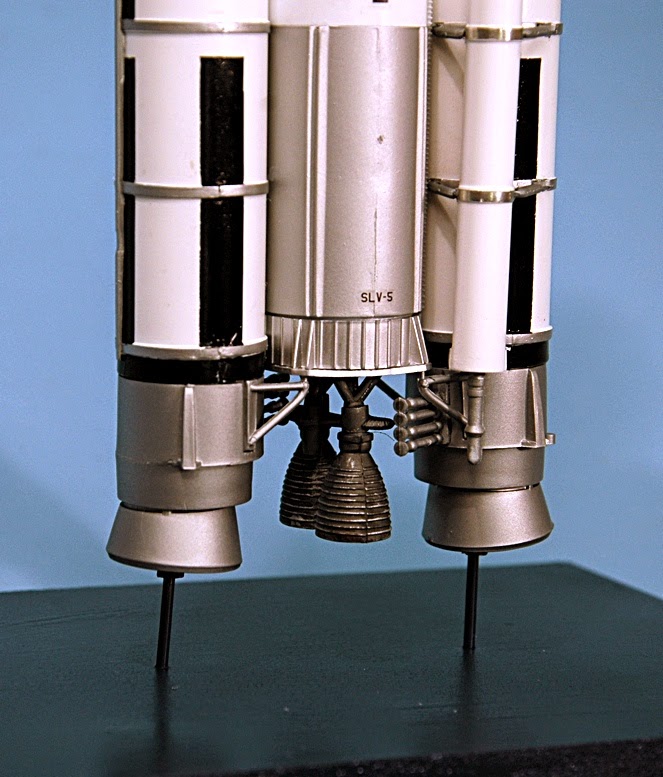 Unlike the Vostok, which would stand on its boosters and central core without a base, there is a slight problem with the Titan, in that it does not conveniently stand erect by itself. The launch lugs for the flying option are still in the kit, so one way would be to glue these on one side, and slide them over a rod, as if it was a flying rocket ready for launch. The photos show an alternative method, which is to drill holes in the boosters, and fit them over two rods, fitted to a base cut from a rectangle of MDF.

First time round, here is the portrait-format box (below) as supplied for the original kit. 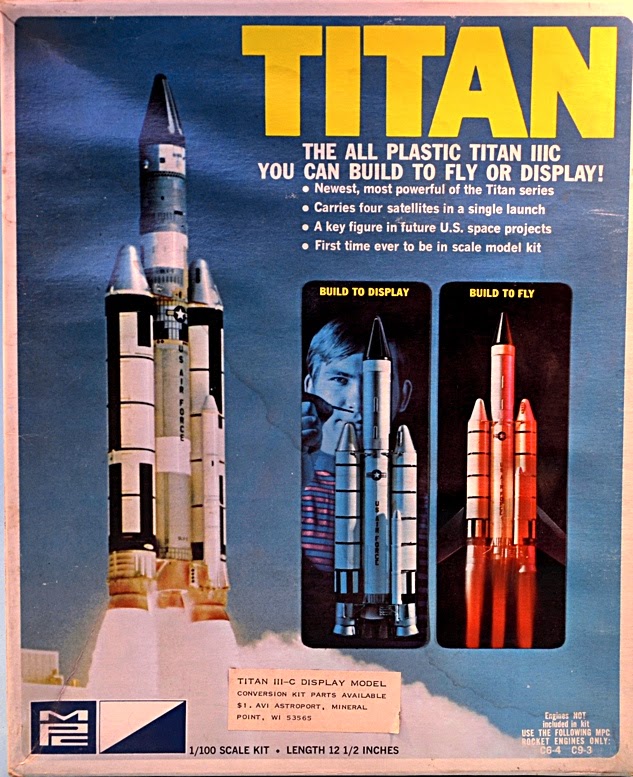 The best known use of the Titan rocket was to launch Gemini two-man space capsules. This was the Titan II, and perhaps it’s odd that MPC didn’t feature this, rather than the IIIC. Urban myth has it that MPC made a ‘Gemini Titan’, but in fact this is the only Titan version MPC produced.