TIME FOR YOU TO PUT ON THOSE COOL SHADES - REVELL 1:25 SCALE HUMMER H2 FINISHED IN CSI-MIAMI MARKINGS 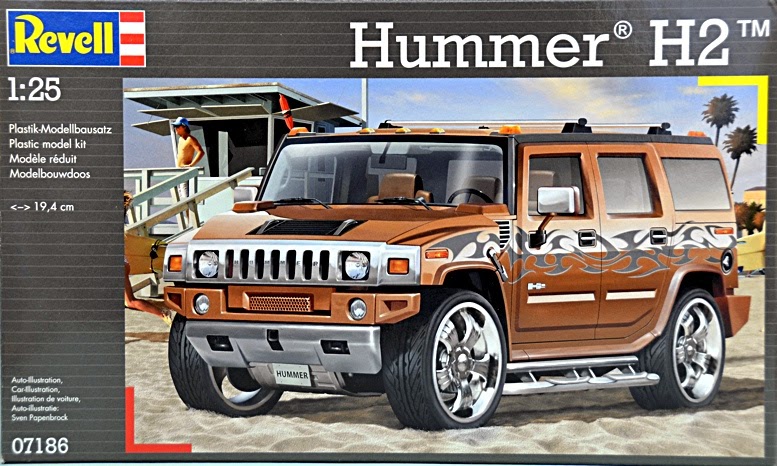 The Revell-Germany 1:25 scale Hummer H2 kit has been through several incarnations before reaching this latest iteration.


Mat Irvine: Previously this Hummer H2 had been issued by Revell-Monogram (RM) for the US market, starting off as a ‘diecast’ kit, where the body was in metal, pre-finished with paint and markings, though the rest of the parts were in conventional plastic and needed assembly. 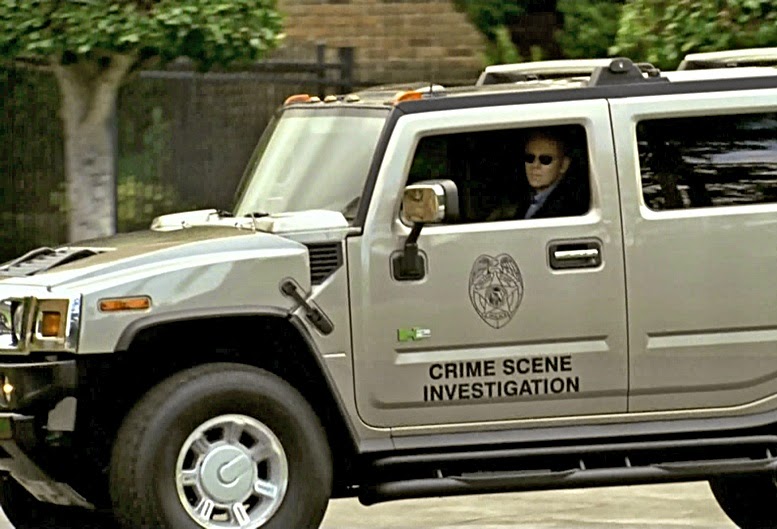 In addition this first version was issued as from the TV series, CSI-Miami (above) in which Hummers were used as the general mode of transport for the CSI crew. 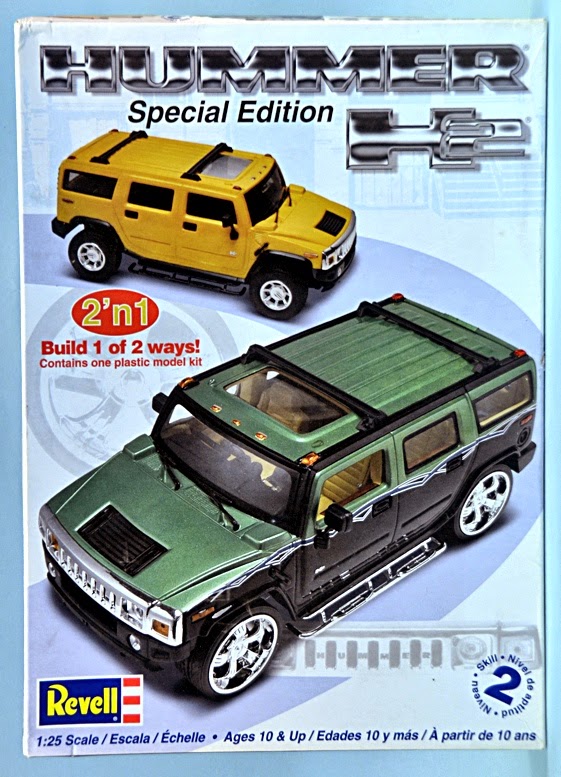 The CSI issue (below) was the only one where the body was metal, subsequent issues moving the moulding of the body over to plastic. A custom version was also made, which primarily meant giant sized ‘Donk’ wheels replacing the admittedly already pretty large stock wheel and tyres, and installing a suitably gigantic sound system. RM issued the kit with both these stock and custom options, though the stock was purely that, with no CSI scheme. 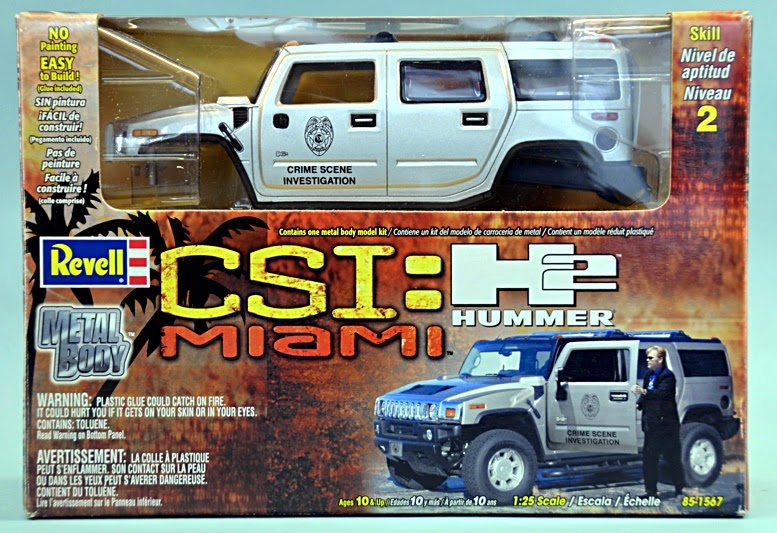 This latest release has only the custom options, but with a bit of mixing, matching, and scratch-building, a CSI version can be built, as shown in my photos. 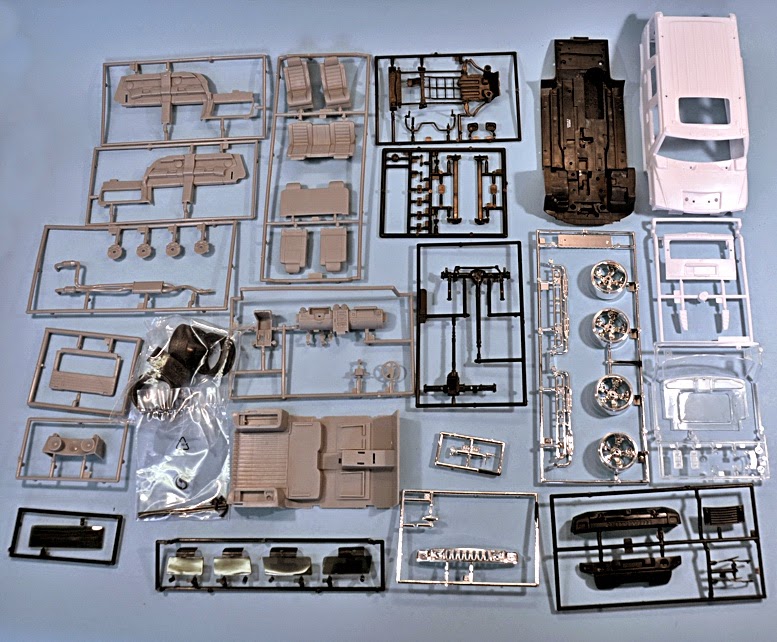 First, the construction. This is a glue-assembly kit, but a lot of the parts almost snap into place, and although the diecast kits Revell made were simplified slightly, in that there was no opening hood or separate engine, everything else is well up to the detail you’d expect in a conventional kit. The underside has a complete four-wheel drive system and separate exhaust, while the interior has separate seats, side panels, built-in speakers, and decals for the instruments. 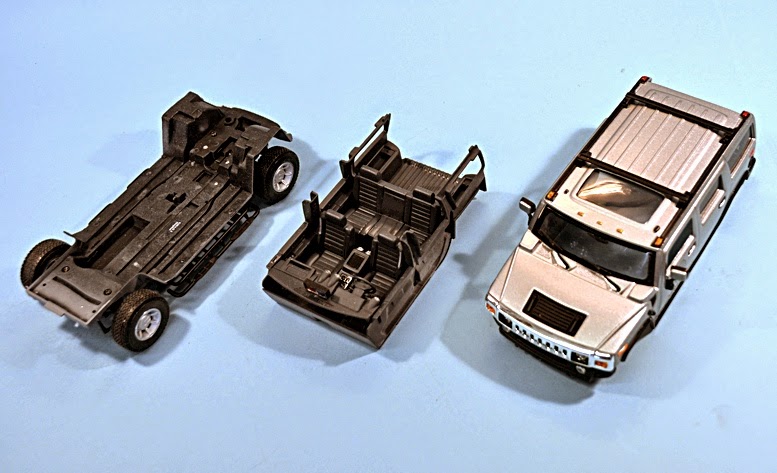 If you are building a custom Hummer H2, well, anything goes regarding the colour scheme. However, all the CSI cars were finished in silver with black trim, and for the silver on this model, I used Testors ‘Diamond Dust’ from the One-Coat Lacquer range, though other model paint manufacturers do similar shades. 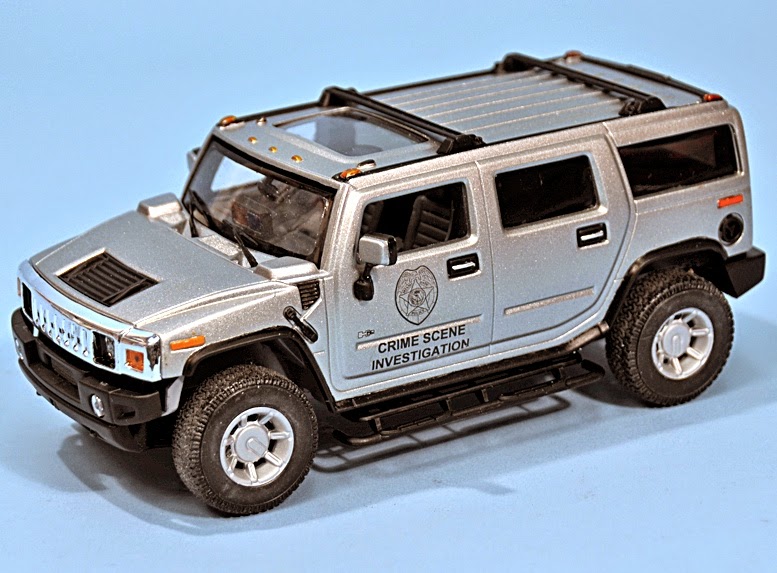 The decals were home-made, with lettering being word-processor generated. I found the badge online. 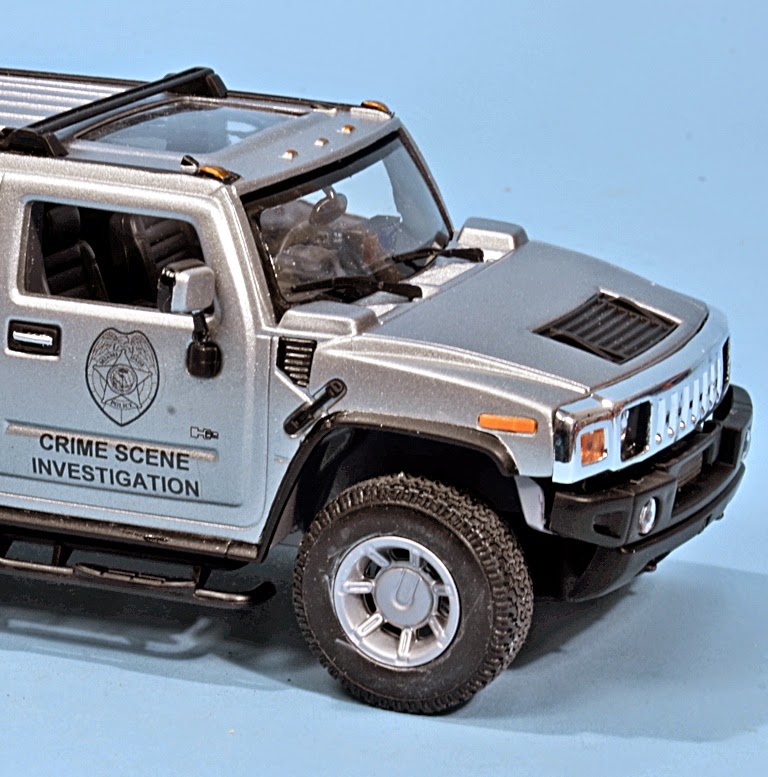 One point about Revell’s original diecast kit range is that most examples also made a completely finished version. In these cases, there was also an included extra in the form of an appropriate figure. In the CSI-Miami Hummer (below) this was the team leader, Lt Horatio Caine, played by actor David Caruso. 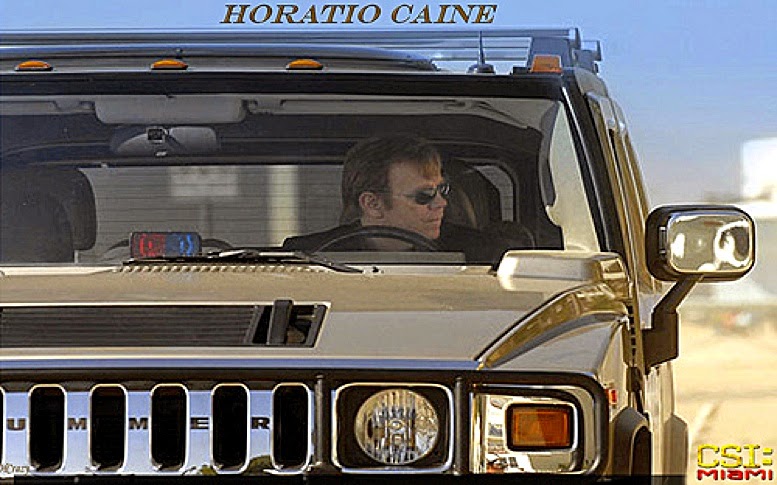 Adding such a figure to these ‘Star Car’ kits adds much to the final look, and in this case, you could have taken the figure from the ready-built version and added it to the kit. 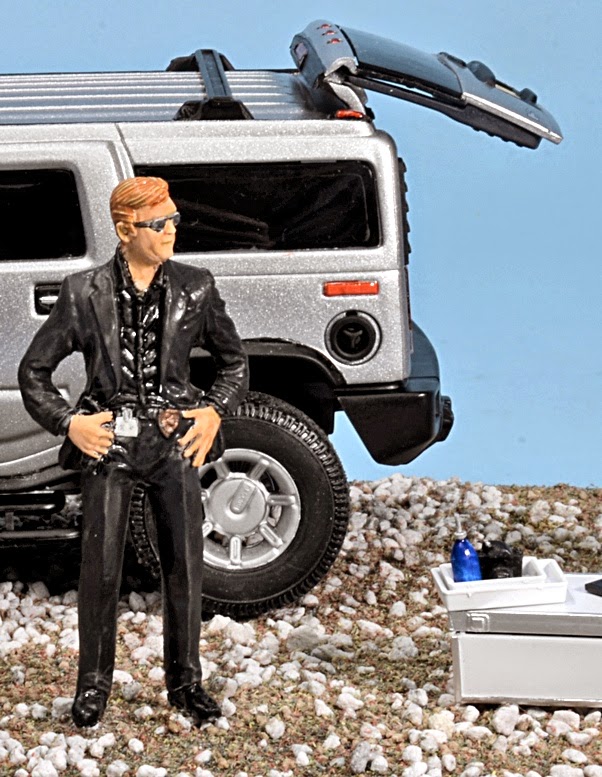 OK, it’s an expensive way of doing it, but you’d have the figure. Except that in this case you couldn’t, as although Revell advertised a ready-finished CSI Hummer in 2004, the model was never released. 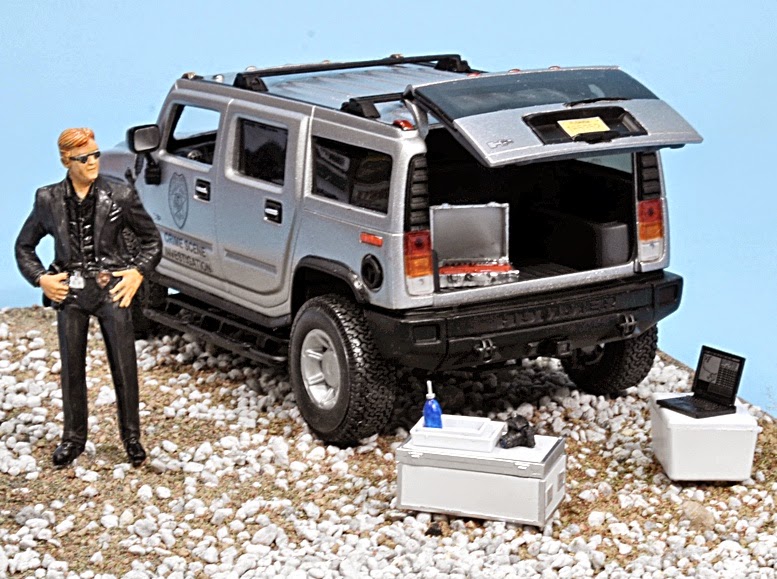 But all is not lost - the German model car accessory company Scale Production has a range of 1:24/5 scale figures in resin, one of which depicts Horatio Caine (above two pictures and below). 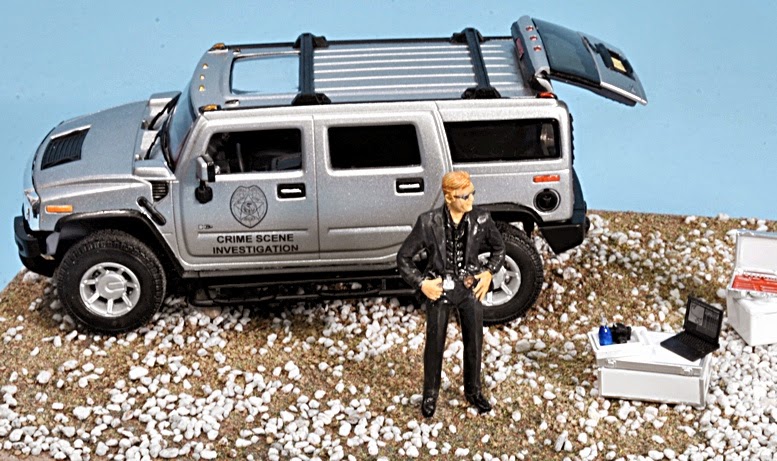 Actually this is about the only ‘star’ name that does what it says on the tin, the others being couched in more enigmatic language. For example, Michael Knight (from the TV series, Knight Rider) is down as ‘Michael K. Rider,’ and Colt Seavers (from the action-adventure TV series The Fall Guy) is listed as ‘Colt Guy’.

The figures require painting, unlike those from Revell, which would have been pre-painted. To finish the small diorama scene, I found some suitable CSI-style equipment. Some nondescript boxes are included in Italeri’s truck accessories kits, but the tool case, box, and laptop, are from the Tamiya Rally Mechanics set (below). 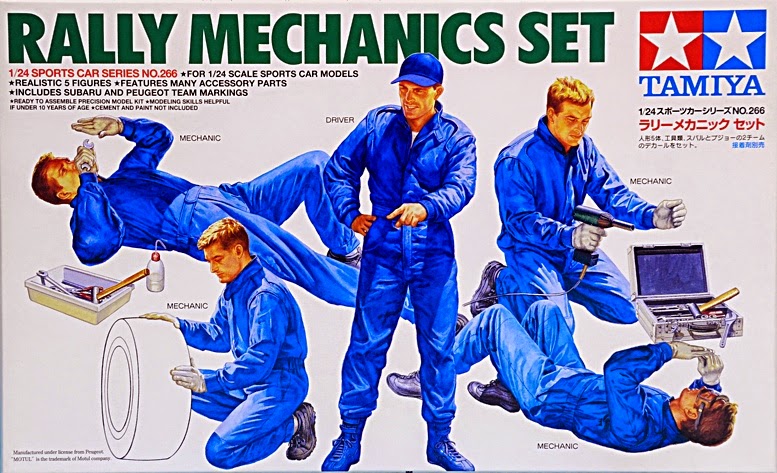 The supplied trays in this kit can also be used, and what started as the oil bottle can be converted into a puffer or maybe a container for that favourite of forensic scientists, the blue-glowing chemical, Luminol. The camera comes from Tamiya’s larger 1:20 scale Formula 1 Mechanics set. It’s a Nikon-style SLR, which could be film or digital, but as Nikon DSLRs vary in size, the scale difference isn’t important. 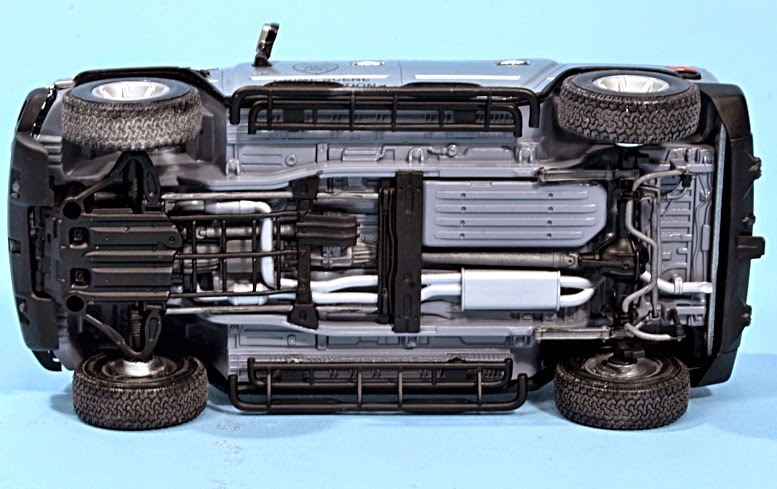 Completed underside assembly (above) showing the full 4WD setup neatly detailed and moulded. The finished model (below) looks good, and has the correct 'sit' on that chunky rubber. 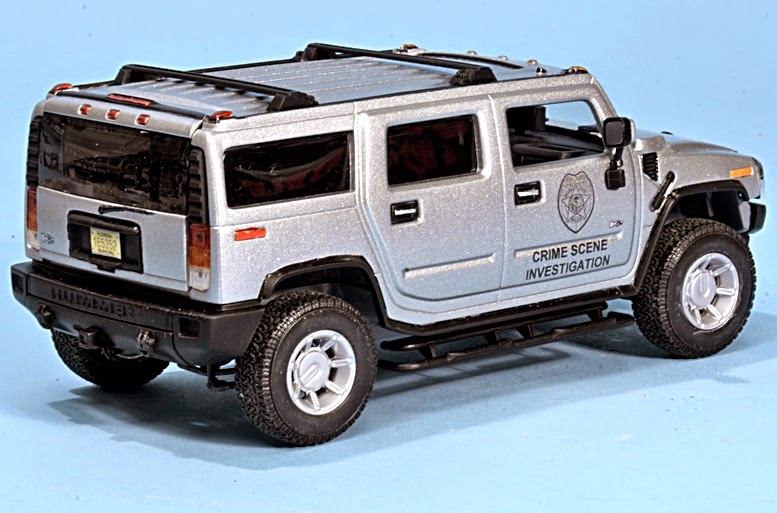 Thanks to:
Revell-Germany for the Hummer kit.
Revell-Monogram for the earlier US issues.
The Hobby Company for Tamiya and Italeri.

Click here for the Revell Hummer H2 and assorted others.