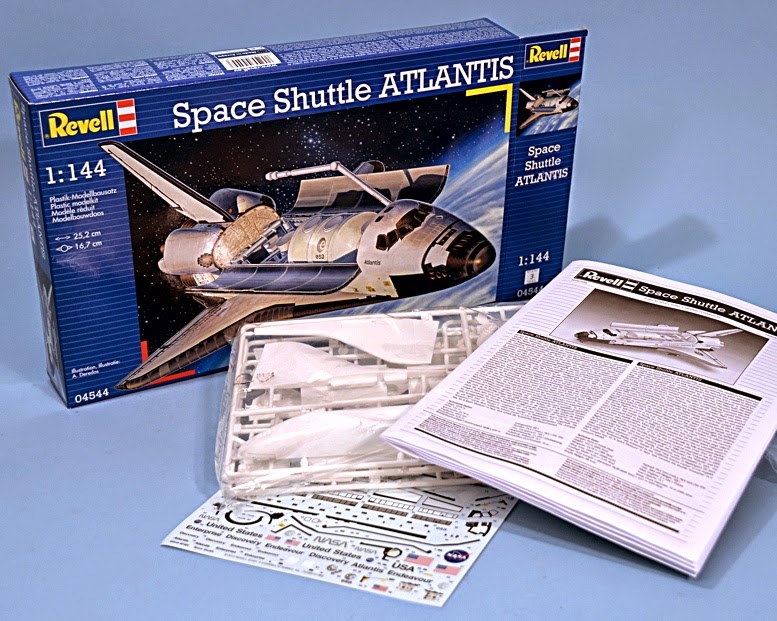 
Mat Irvine: These are both reissues of kits that started life way back at the beginning of the Space Shuttle programme. In fact, the Boeing 747 SCA (Shuttle Carrier Aircraft) was the first-ever Revell kit of the Shuttle system, issued in 1977. This kit featured the Shuttle Orbiter Enterprise on the box, though separate Columbia and Challenger box-art was also made.

The 747 SCA has box-art that shows it flying over the specially-constructed display buildings at the Smithsonian Udvar-Hazy Center, Dulles Airport. This did have Enterprise on display, but now houses Discovery. Enterprise has been moved to the Intrepid Museum, NYC. 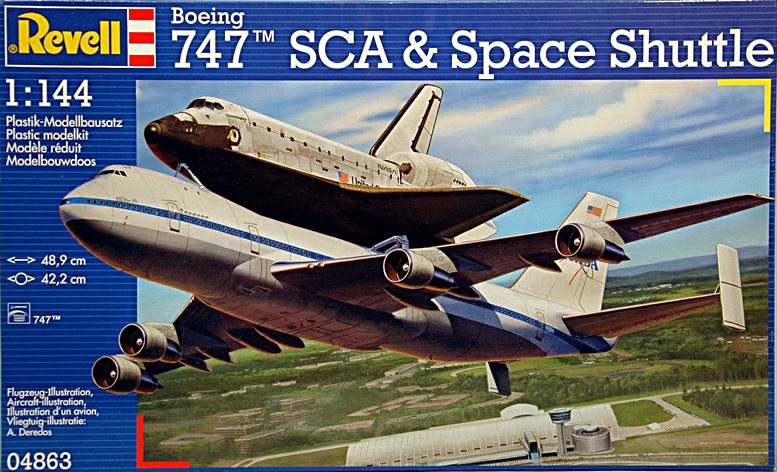 However, these kits featured no payload or interior detail. In 1978, the Orbiter was issued by itself, and this time a generic Spacelab payload was included. Although many of the Spacelab components soon stopped flying, this payload stayed, and fact both kits feature Orbiters with Spacelab payloads. In the 747 SCA case, the payload doors are left closed as the Orbiter is not transported with them open, or with any payload inside. Although the parts are included, you are not instructed not to use them, as there’s no point. With the Orbiter stand-alone kit though, you can choose either option. 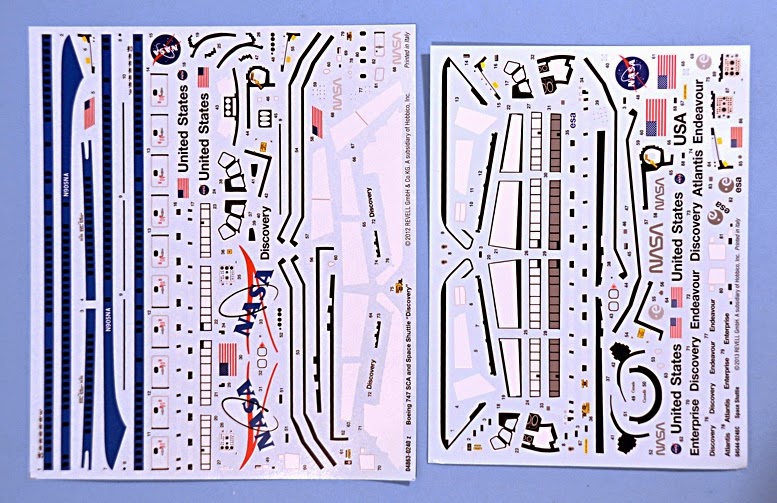 The main point about these reissues though, is that all-new markings can be included, which is the case with both kits. At left (above) is the 747 SCA set - note the blue NASA cheat line and the ‘swoosh.’ Decals for the Atlantis kit are at right.

The Orbiter features markings for all six craft - including the non-orbiting Enterprise - although it really concentrates on the last three, Discovery, Atlantis and Endeavour, as their markings were similar. To this end the plans no longer instruct you to paint it ‘black and white, with a touch of grey.’ Instead, comprehensive layouts are provided. The  differences - especially between the ‘whites’ - depends on the thermal coverings, and the before-and-after 1998 point, when markings were changed from the NASA ‘worm’ logo to the reintroduced old ‘meatball.’

The Boeing 747 SCA takes advantage of the last colour scheme the two SCA aircraft were painted. Both planes were originally ex-airline machines, from American Airlines and JAL, though this kit supplies only the number for the first, N905NA, the other being N911NA. Initially the SCAs kept much of their original civil schemes, replaced by classic NASA white upper surfaces and mid-grey undersides. In the kit you get the classic blue NASA cheatline down the sides, along with the new-style NASA ‘swoosh’ for the tail. 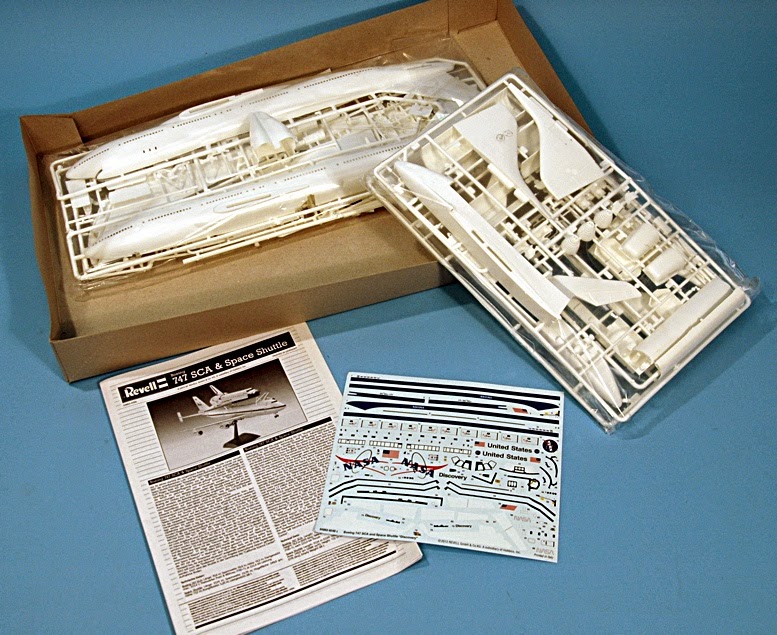 Slightly oddly, the Orbiter markings in the SCA kit are different to those in the Orbiter-only kit. Firstly, they are only for Discovery, and secondly, the tail fin black and white colours are supplied as decals, whereas the Orbiter kit supplies only black edges. But of course, as both kits are to the same 1:144 scale,  there is no reason why the decals - and in fact the Orbiters - can’t be interchanged.

Delivery flights
After Shuttle spaceflights were terminated, the SCAs carried three of the remaining four Orbiters, Enterprise, Discovery, and Endeavour to their final resting places on display, while Atlantis remained at the Kennedy Space Center. 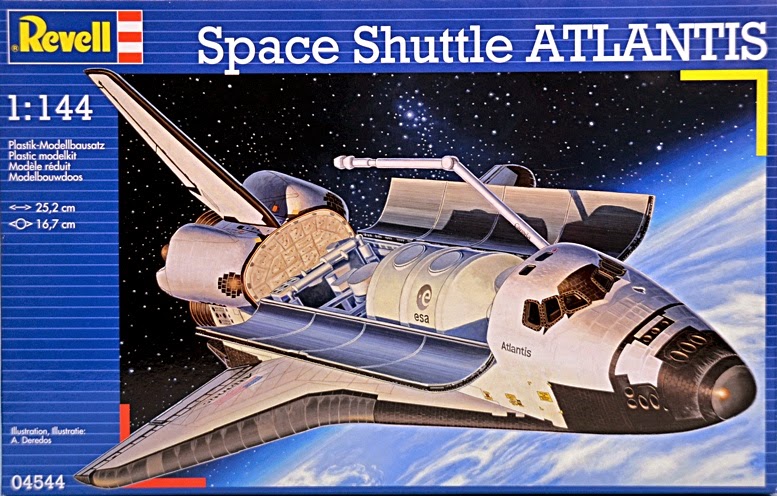 Both SCAs are now retired, the ex-JAL 911 being used as a source of spares for NASA's Stratospheric Observatory for Infrared Astronomy (SOFIA) an infra-red telescope carried on board a 747. It’s based at the NASA Armstrong Flight Research Center, California, renamed from its previous title, the Dryden Flight Research Center, on March 1, 2014.

The ex-American Airlines 905 is due to go on display in 2015, at Houston Space Center, Texas, complete with a replica Shuttle Orbiter in position.

Thanks to Revell-Germany for the review kits.