US COAST GUARD LIFEBOAT BECOMES A MOVIE STAR - AND GLENCOE HAS A 1:48 SCALE KIT TO MATCH 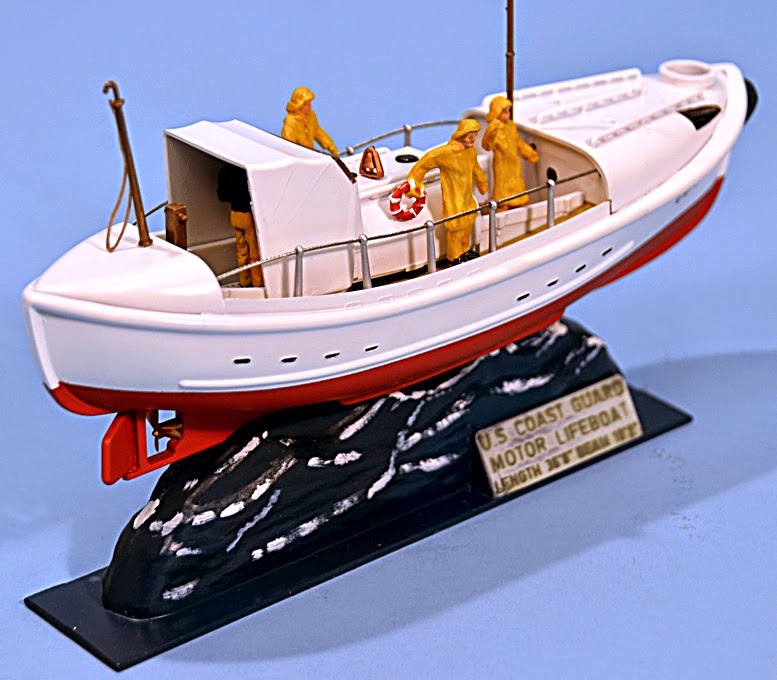 This 1:48 scale model lifeboat began as an ITC kit in 1959, and has been available from Glencoe for many years. Now the vessel has become a star in its own right, as it featured in the best selling 2009 book The Finest Hours, presently being made as a Disney movie of the same name.


Mat Irvine: In 1952, Rescue Boat CG 36500 went to help the oil tanker Pendleton, being battered by a 70-knot storm off the coast of Cape Cod, Massachusetts. Thirty-two crew were taken from the stricken ship, and returned safely to Chatham Lifeboat Station. All four Coast Guard crewmen received the Gold Life Saving Medal for the mission.

The box art (below) was painted by Jack Leynwood, one of Glencoe's regular illustrators.

The kit is - due to its age - somewhat simple in construction. But even delicate parts such as the masts and railing supports still mould well, and the model builds into a neat little replica of the boat.

The runners (below) are far thicker than they would be in a new-tool kit, but the parts themselves are finely moulded. 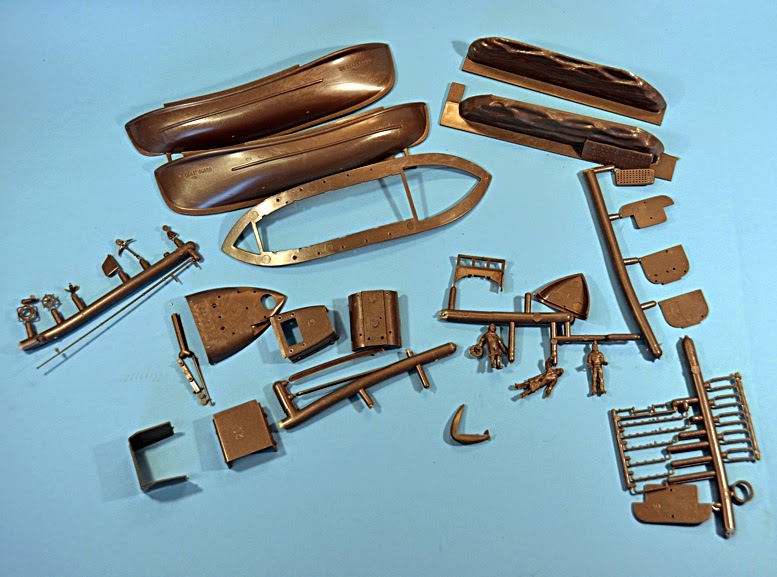 Out of the box, the model is a generic boat of its type, with ‘U.S. Coast Guard’ etched on the hull. Building it as CG 36500 was simply a matter of sanding this raised lettering off. You would probably do this in any case, as in real life, the letters and numbers are not raised, but painted. The colour scheme needs changing to overall white, the hull painted red below the waterline. Actually, this is how CG 36500 is at present (she is a floating museum) for over the years she has gone through several restorations. Check the website (address at bottom) that gives you more photos of the actual craft. 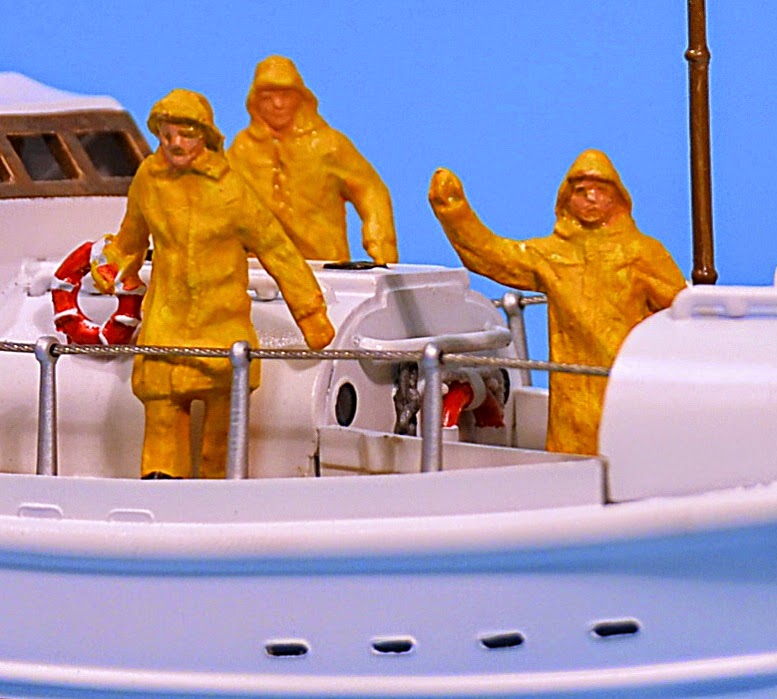 The instructions indicate that wire can be added for the port and starboard handrails, and thread for the aft mast that would hold any flag. The only actual modification for my version here was to generate the words, ‘U.S. Coast Guard’ and ‘CG 36500’ and print them onto decal-making paper. Future editions of the kit will have a new decal sheet with appropriate lettering. 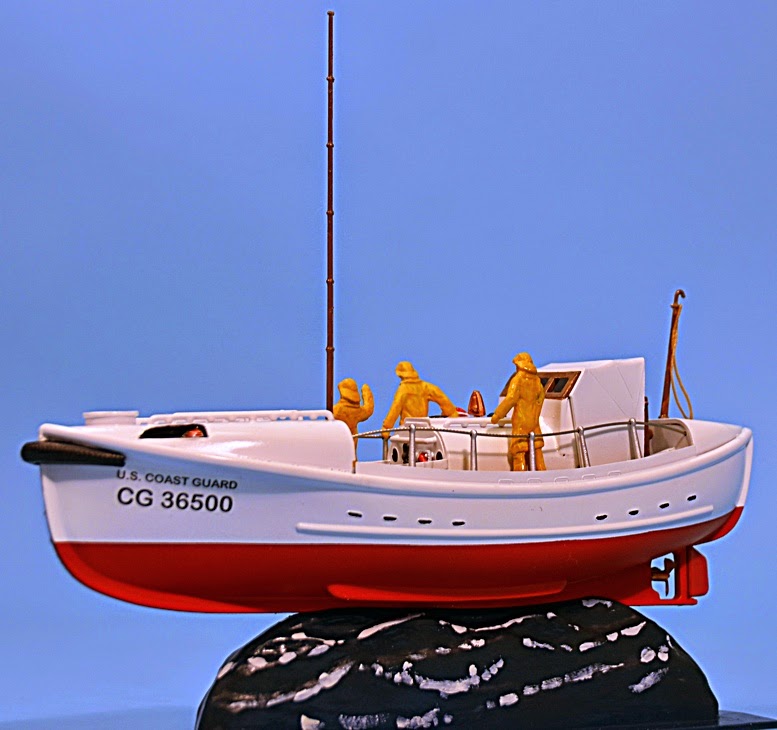 An addition of mine was to add a fourth crew member to the kit’s complement of three, consisting of a pilot and two men in waterproofs. The rescue mission carried four, so a spare figure was used from another kit, with his stance modified. The extra man is piloting the vessel under the canvas-covered wheelhouse, but if you don’t want to go to the trouble or expense of doing this, maybe the fourth crewman can be thought of as out of sight, below decks!

The stand shown in the pictures is supplied in the kit, and holds the vessel riding the waves of a stormy sea, an appropriate stance. 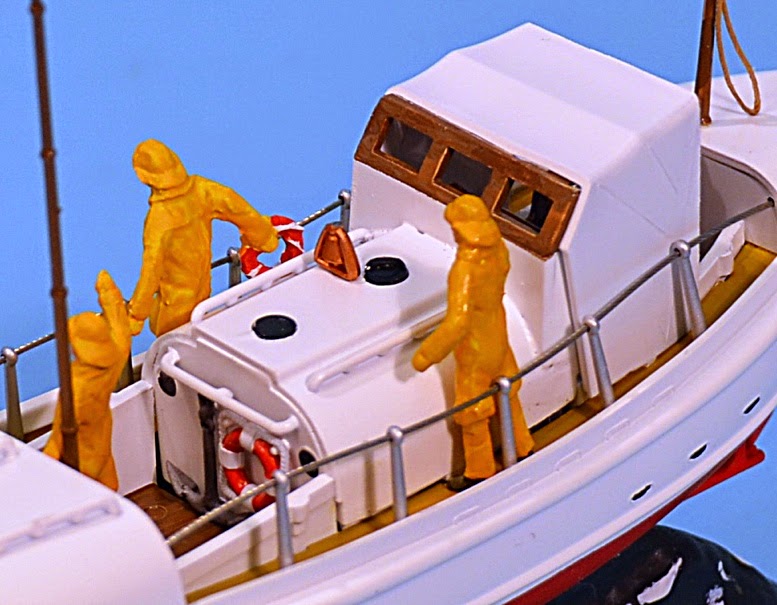 As I have mentioned before, I now webmaster the Glencoe Models site where you will see that I have set up a news page which gives more details, plus photos of the finished and assembled model.

Book and movie
The rescue is related in The Finest Hours by Michael J. Touglas and Casey Sherman, and now Disney is planning a movie based on the book. This will star Chris Pine, currently best known as Star Trek’s ‘new’ James T. Kirk, Captain of the USS Enterprise. Although he keeps his Captain status, he will be exchanging his warp-drive command for a somewhat slower vessel. The US Coast Guard Rescue Boat is of the same type as CG 36500, so Glencoe Models now has a real ‘starship’ in its catalogue.