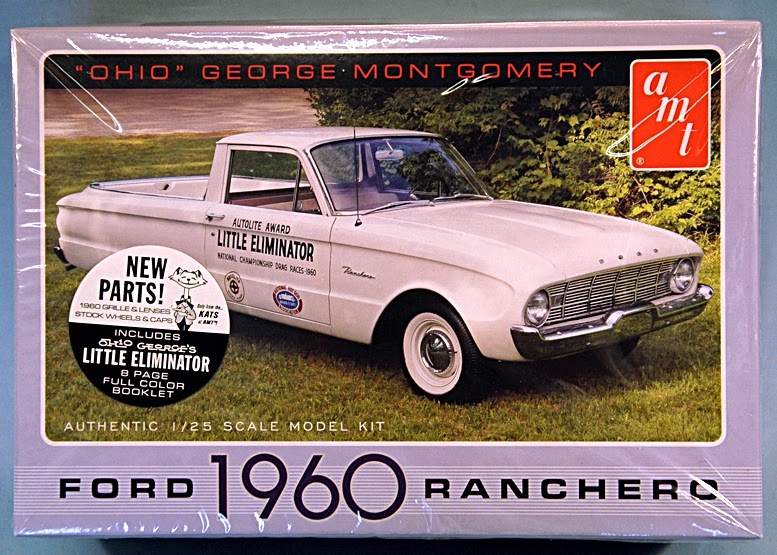 THE AMT 1960 FORD RANCHERO is a 1:25 scale model that first appeared as an ‘annual’ kit in 1961. This particular Ranchero is a 1960 version, but pickups didn’t change as much as sedans from year to year.


Mat Irvine: AMT has also issued the Ford Ranchero as the vehicle used by drag racing legend, ‘Ohio’ George Montgomery. He won the Autolite-sponsored ‘Little Eliminator’ Ranchero in 1960, as his prize for winning at the Big Go drag races that year. He used the Ranchero as a push-and-tow vehicle for the rest of his career, and still owns the car.

The Ford Ranchero was a sedan-based pickup, designed to give an owner the advantage of a car-like driving position, with a utilitarian pickup load bed behind. The pickup was based on Ford’s successful compact car of the time, the Falcon. 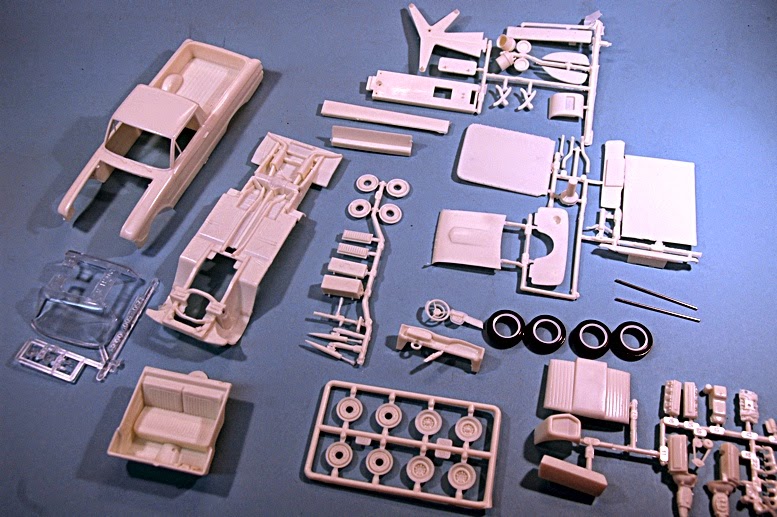 The kit (above, below) features some original custom components, such as a pleated top for the cab, louvres for the hood, and horizontal ‘tube’ aerials. If you wish to build a service vehicle, the kit includes oil cans, tool box, jack, and a push-bar for the front end. 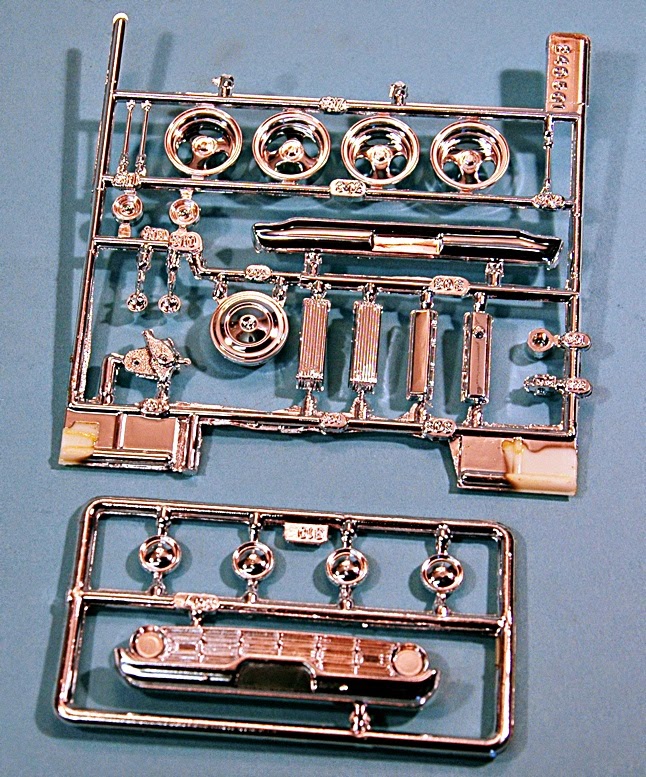 The ‘Little Eliminator’ version is basically a stock 1960 Ranchero, with a grille that slightly differs from the 1961 model, and has been newly-tooled for this kit. A booklet is included that shows the actual pickup, so you can match your model to the full-size original. 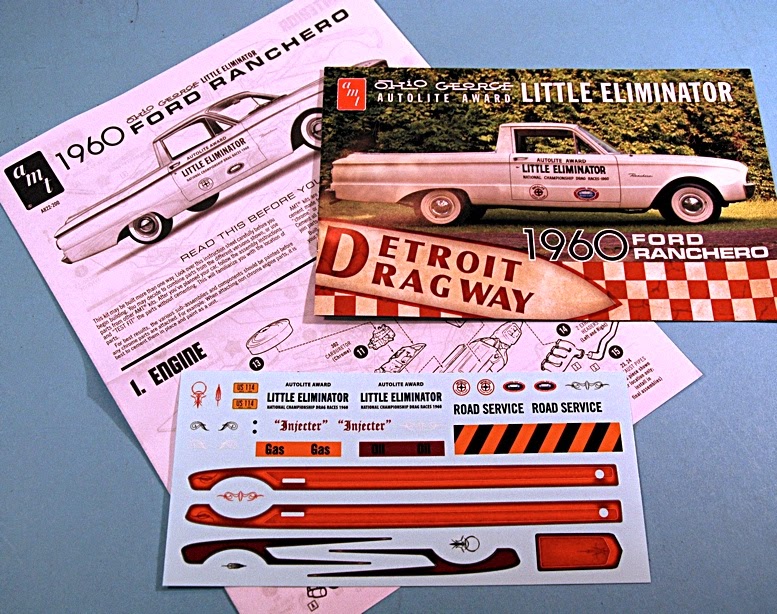 The overall colour is white, with the interior an interesting two-tone ivory and reddish-brown. Although it’s a vehicle from the 1960s, there is little chrome trim, and I used BareMetal Foil to create what is required for the model. 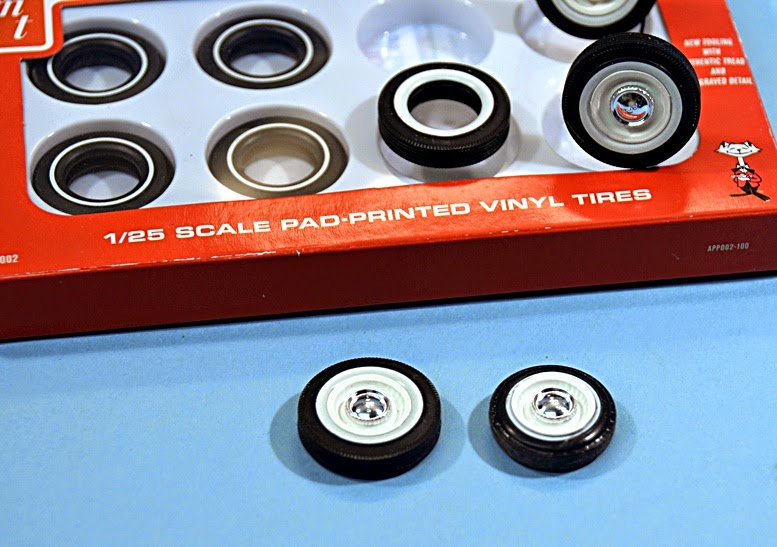 A modification I made was to change the supplied tyres (above, front right) for those included in one of the new AMT Accessory Packs, as the kit ones seem slightly too small to me. I also changed the plastic radio antenna to one made from thin wire, for added realism over the somewhat chunkier plastic version in the kit.

Below, you can see how I have matched the interior sub-assembly to the photo in the booklet. 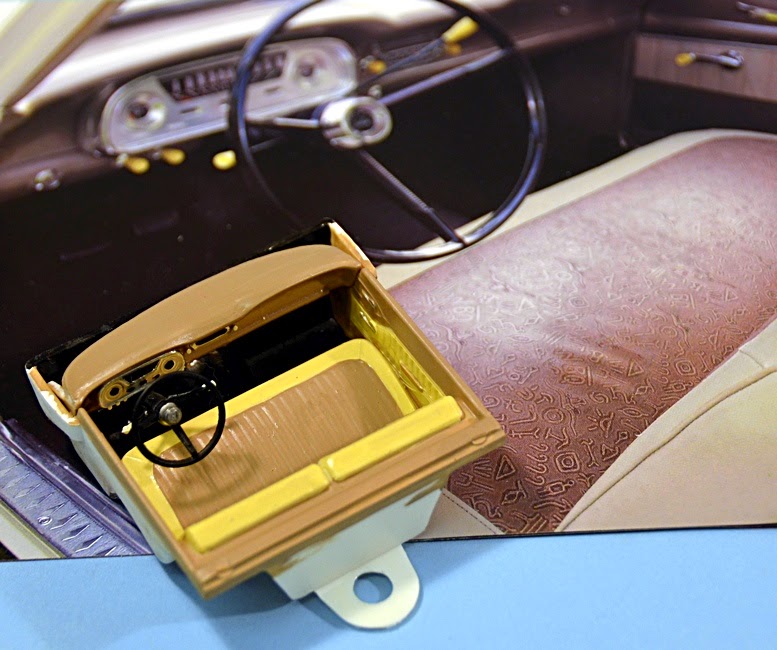 The booklet (front cover below) has plenty of details describing the Little Eliminator version you can build. 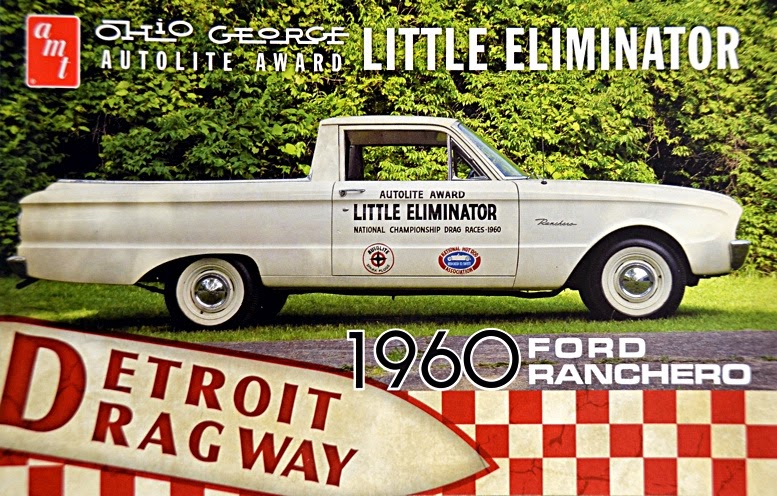 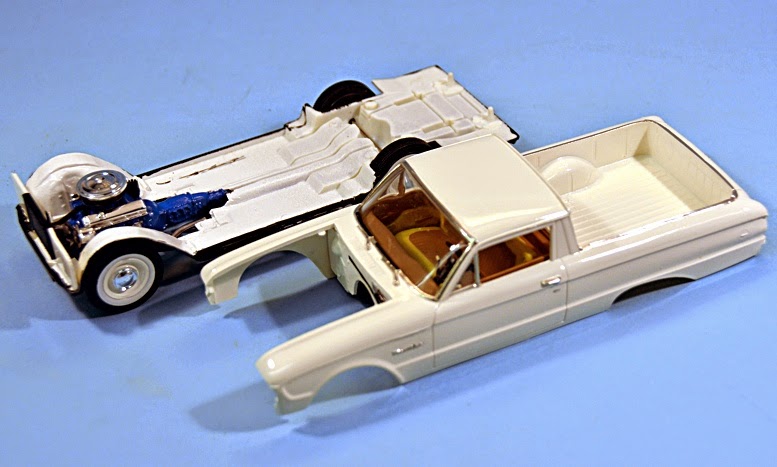 Tinting the tail lights (below) with Tamiya red transparent paint. 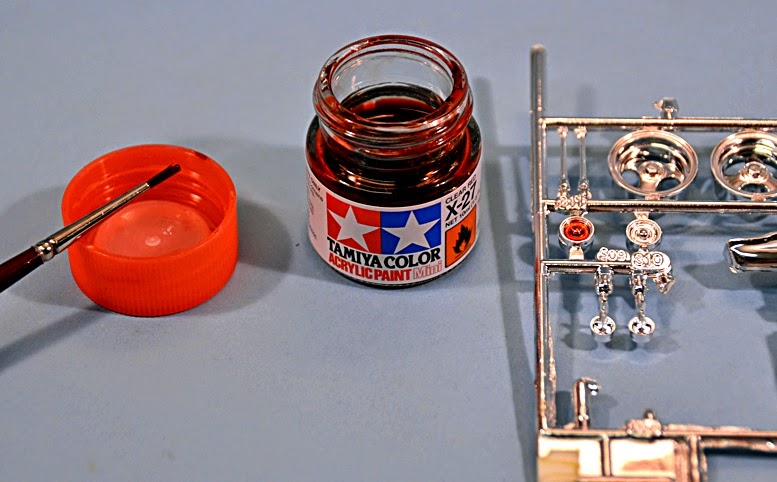 Comparing the original ‘Ranchero’ script on the front fender from a 1961 original (below top) with the new release. The reissue is not as sharp, but then the basic tooling is over 50 years old! 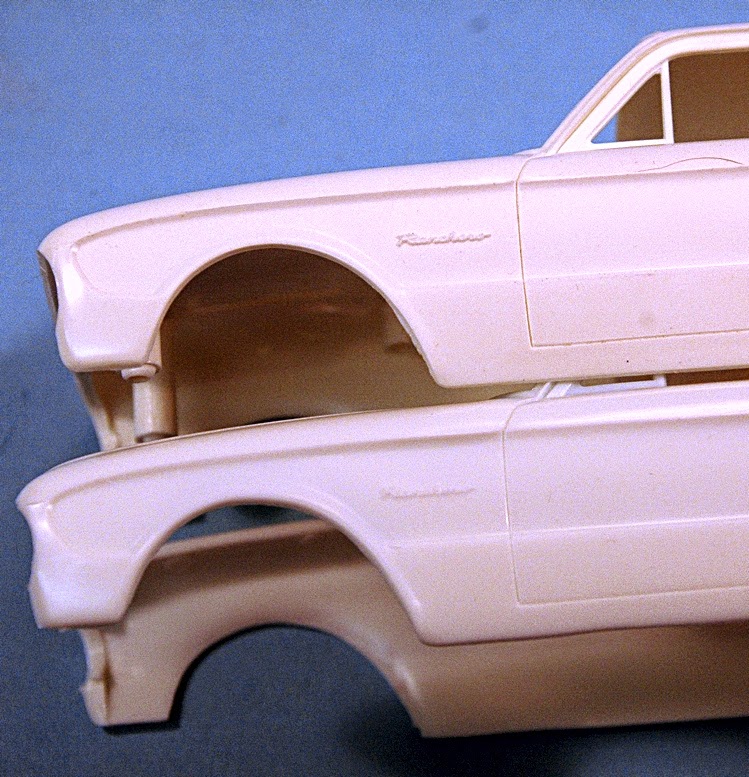 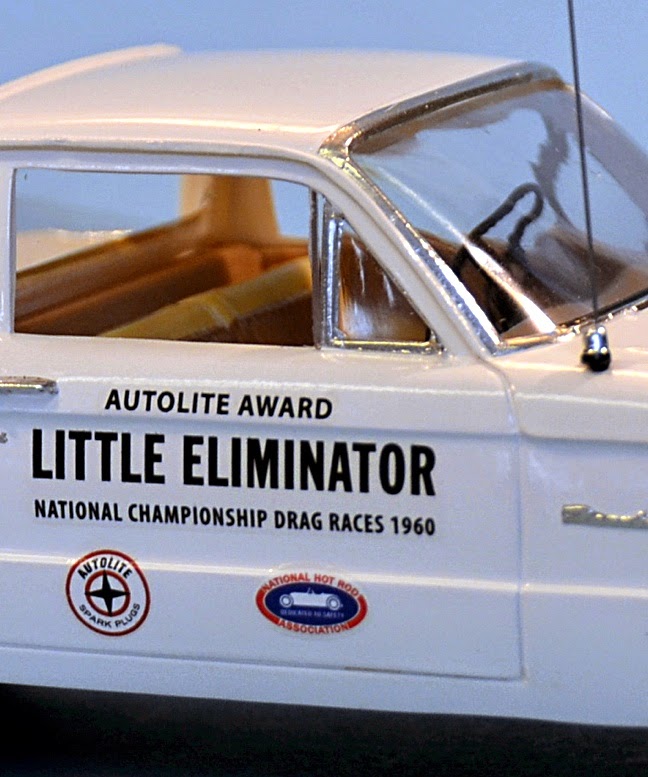 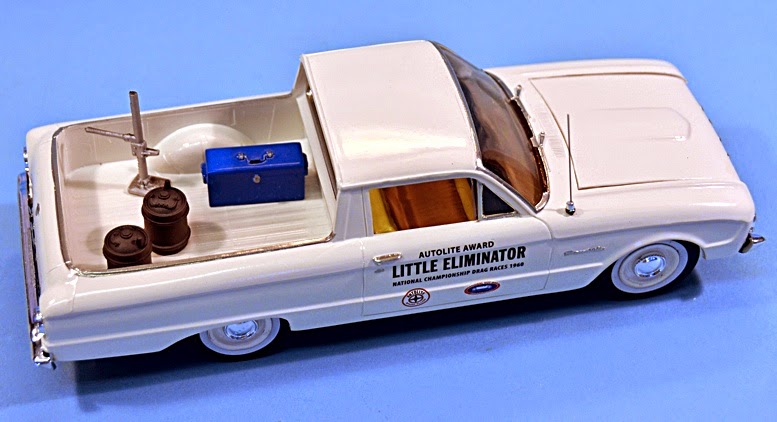 Finished pickup (above, below) with service equipment, and optional cover for the pickup bed. 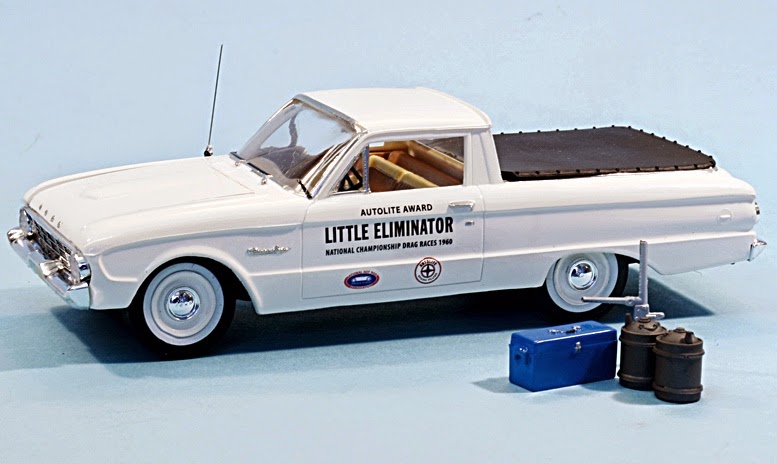 Box for the original 1961 version (above, below). Note this was a generic box design, the name of the actual kit inside being identified only by the label stuck on the end. 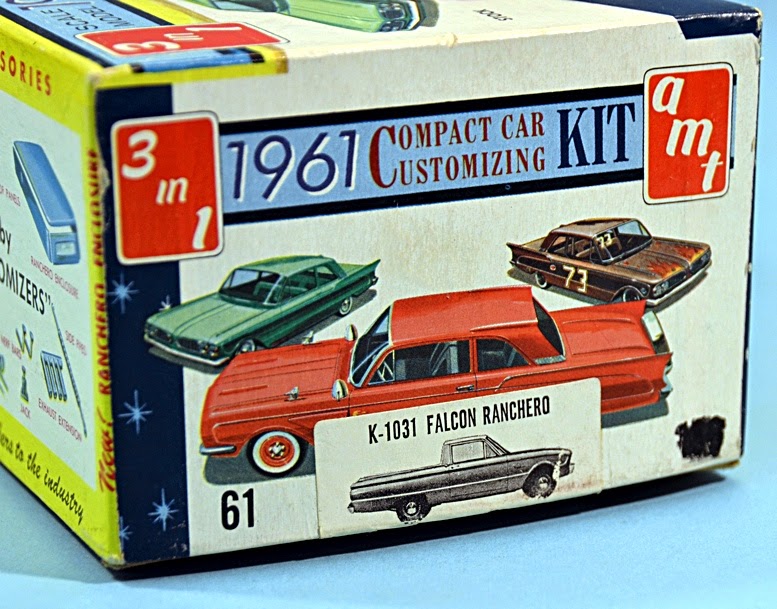