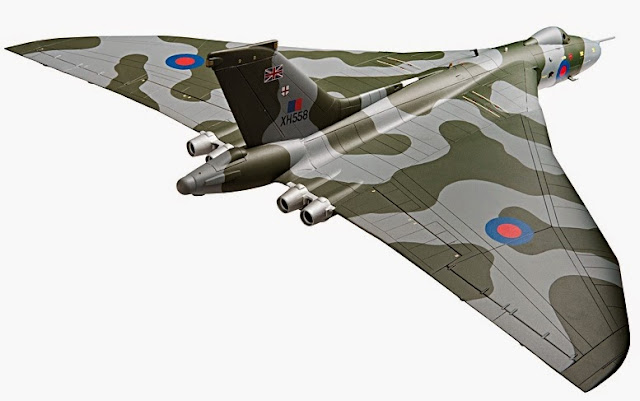 THIS LOOKS TO BE QUITE A BEAST from diecast manufacturer, Corgi. And the video interview shows that there's been useful cross-fertilisation from Airfix during the design process. 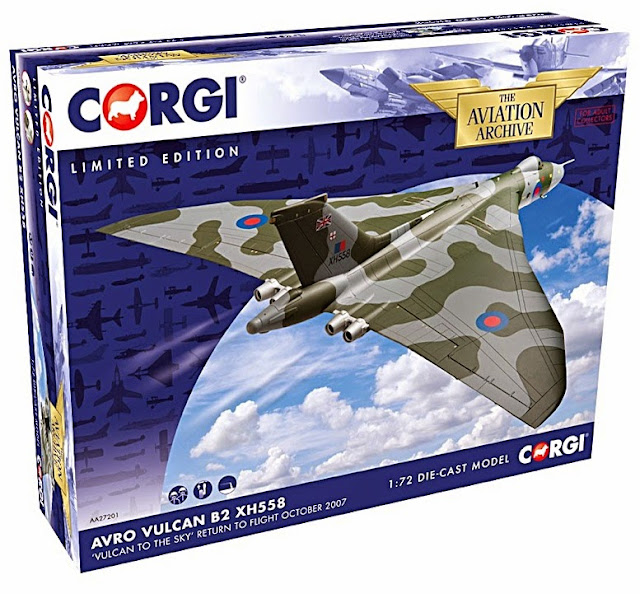 Hardly surprisingly, the box (above) is a big one, though we shouldn't take the 'Limited Edition' label too seriously, except where the markings are concerned. There will doubtless be many variations in finishes to come, and maybe some intriguing models too - we'd like to see a Blue Steel version, and a Black Buck Falklands War veteran.

The video (below) reveals that photo-etch parts are used for some details, and there are fascinating shots of various CAD drawings. It's well worth watching from start to finish.

The model features a particular ex-Royal Air Force Avro Vulcan B2, serial number XH558. It's the same aircraft that has been the focus for the 'Vulcan to the Sky' Return to Flight campaign, details below.

About the real thing
In Corgi's words, "After the disbanding of the last Vulcan squadron in 1984 and the subsequent grounding of the Vulcan Display Flight in 1992, the skies over England were deprived of the unique sight and sound of the Avro Vulcan.

"This was rectified in October 2007 when after years of hard work the ‘Vulcan to the Sky Trust’ succeeded in having a Vulcan grace UK skies once more. Various CAA approvals had to be sought and many observers thought that it would never happen but, thanks to tireless fund raising and countless man hours of hard work by the team, XH558 took to the air once more.

"This was the same aircraft that had been grounded in 1992, having spent the time in-between performing taxi runs and being meticulously looked after, in preparation for returning to its proper place, in the air."

Brilliant work by all concerned, and hats-off to Corgi for homing in on this particular aircraft.

Summation
The Corgi 1:72 scale Avro Vulcan is on the approach path, with a release date of September 19, 2014.

We can't wait to get our hands on this diecast model of one of the three British Cold War 'V-Force' bombers. As a step up for Corgi from the existing 1:144 scale model, it has to be a winner.

It will be interesting to see how the approach to finish and detail differs from the other Avro Vulcan in the Hornby lineup, the 1:72 injection-moulded kit from Airfix.