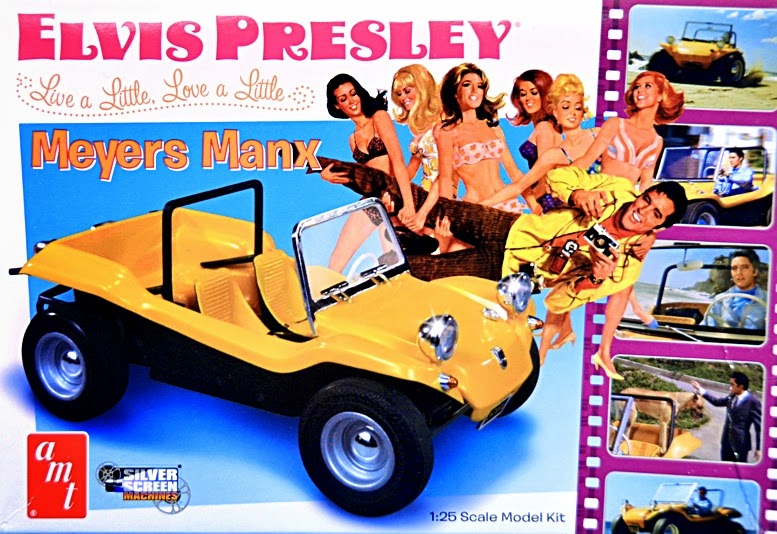 Round 2 continues to mine its back catalogue to reissue many of the older ‘Cars of the Stars’, while adding some new ones. This is one of the latter - in this form at least - as it originated as a much older AMT kit of the classic Meyers Manx Dune Buggy.


Mat Irvine: This time the link is one of Elvis Presley’s many movies (often thought one of his better efforts) Live a Little, Love a Little from 1968. In it, Elvis plays photographer Greg Bolan, who juggles jobs, girlfriends, and bosses. As such, he needs a suitably quirky mode of transport - enter the Meyers Manx, kit box (below) loaded with useful reference photos. 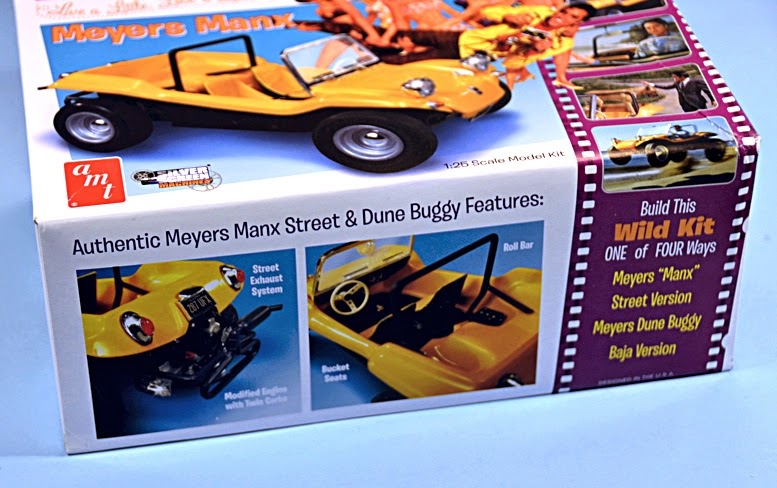 This kit first came out around the same time as the film, though at that point there was no movie connection. It was issued as ‘The Original Meyers Manx Dune Buggy’ and came complete with a card diorama, as was common with a number of AMT kits of the period, and which have since been recreated in a number of retro-reissues. 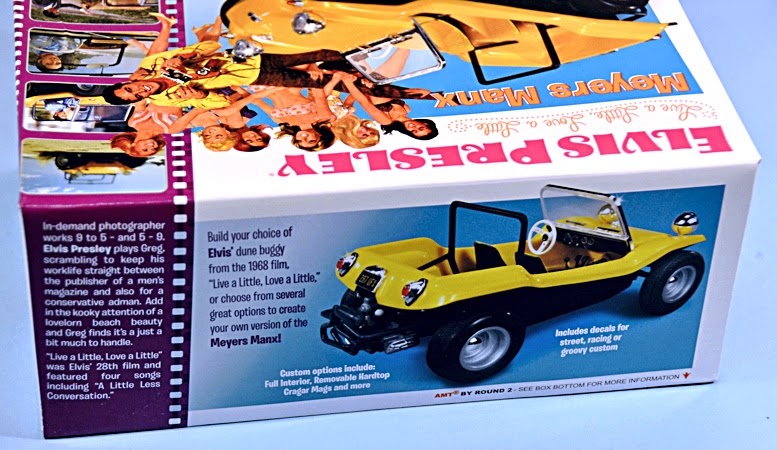 So far as the plastic parts are concerned, this is a straight reissue of the original kit, though the card diorama is omitted and there is new box-art to reflect the Elvis movie. 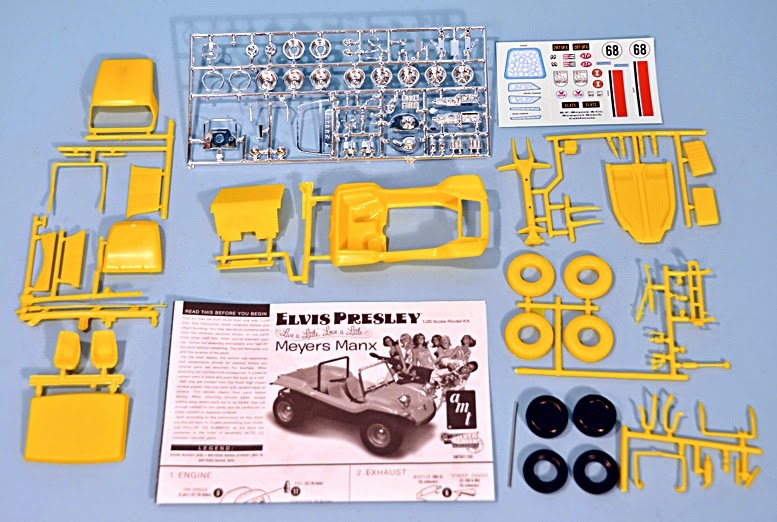 The Meyers Manx was one of the first of its kind, taking a VW Beetle running chassis and adding new bodywork. Being basically a custom, variations were endless, and the AMT original kit gave the builder four options: Meyers Manx, Street version, Dune Buggy, and Baja. Arguably, the Manx and Street looked very similar, as did the Dune and Baja, but each had differences, and of course, you could mix-and-match the components to create your own variation. 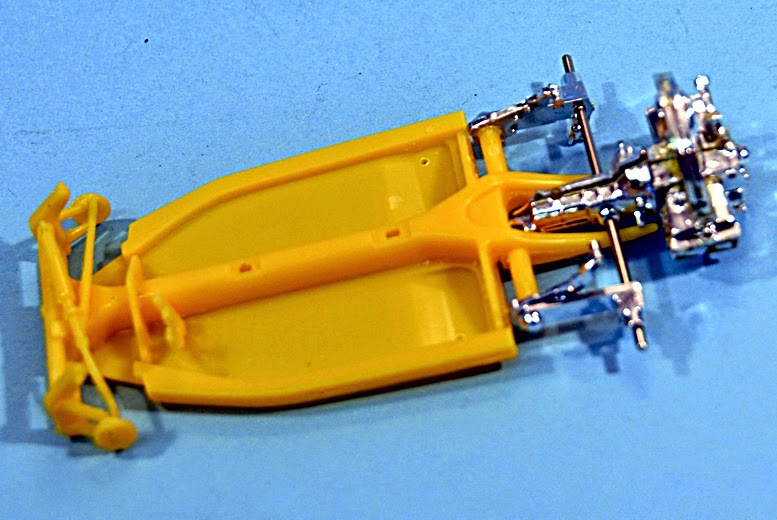 The new 1:25 scale Elvis Live a Little kit is the basic Street version, so it has lights, license plates and runs on street tyres. And as the car is based on a Beetle chassis, you get the famous air-cooled four-cylinder horizontally-opposed engine at the rear. This is supplied (above) fully chromed, not usually the case with VW engines, but handy if you want to go down the extreme custom route.

Alternatively, you could paint the engine aluminium for more authenticity. Strictly speaking, the chrome-plating should be removed beforehand, as it is somewhat thick around some of the smaller and more delicate parts. An oven cleaner can do this task, but do use gloves as these cleaners are highly caustic. 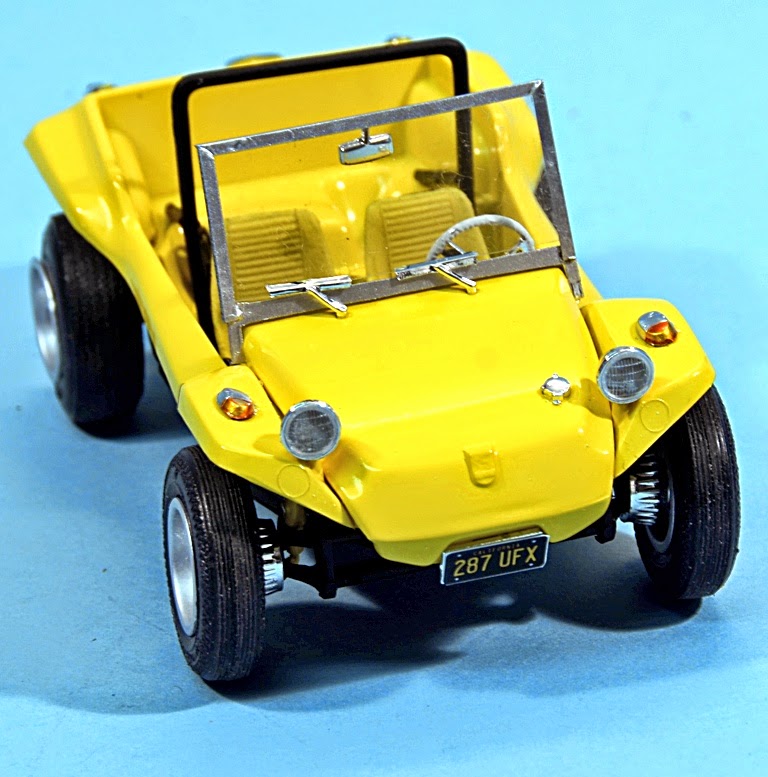 Assembly is not difficult - the engine fits to the rear of the stock VW chassis pan, and the body goes over the top. The body itself is in two parts, main body and front hood, onto which the headlamps, gas filler cap and license plates are attached.

Read on, and you will see I had some issues with colour eventually settling on a warmer yellow than my first Humbrol yellow attempt (below). 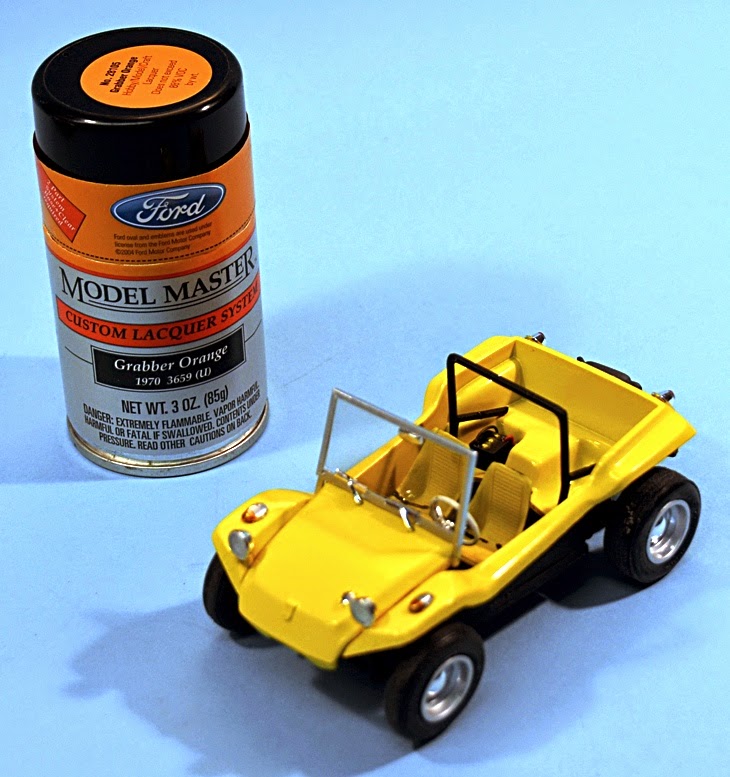 As with previous Round 2 Silver Screen Machine kits, movie-stills are printed on the box, so you can cross-check details. Of the four optional wheel-tyre combos supplied, the movie car matches the ‘reversed-chrome’ ones with the mini Moon discs best. 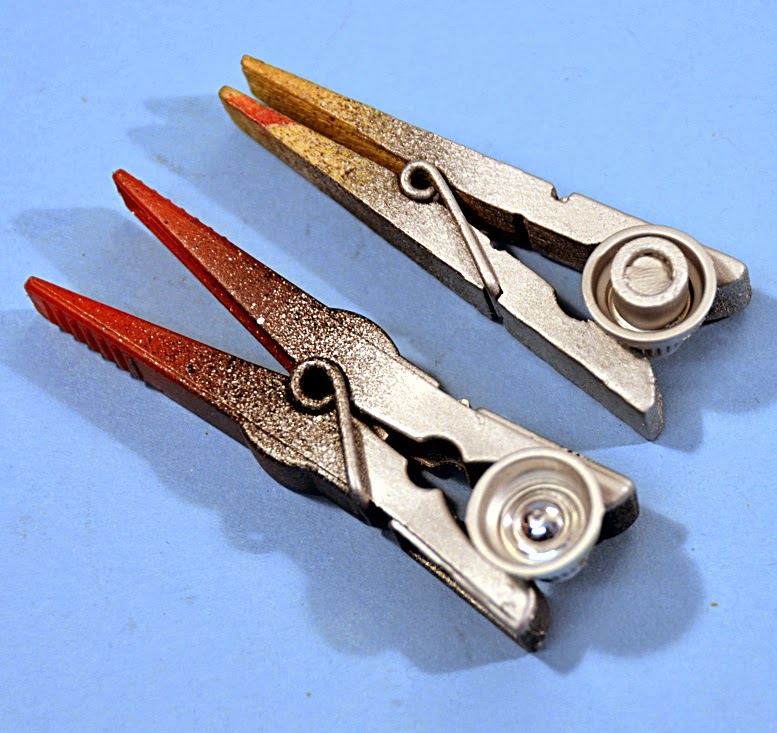 In my build of the car, I masked the central Moon disc, spraying the outer rims aluminium, to give a contrast (above). The discs should have the original VW logo stamped in the centre, but for these you’d have to find an alternative source. There are various stock Beetle kits out there, so finding a set shouldn't be too difficult. 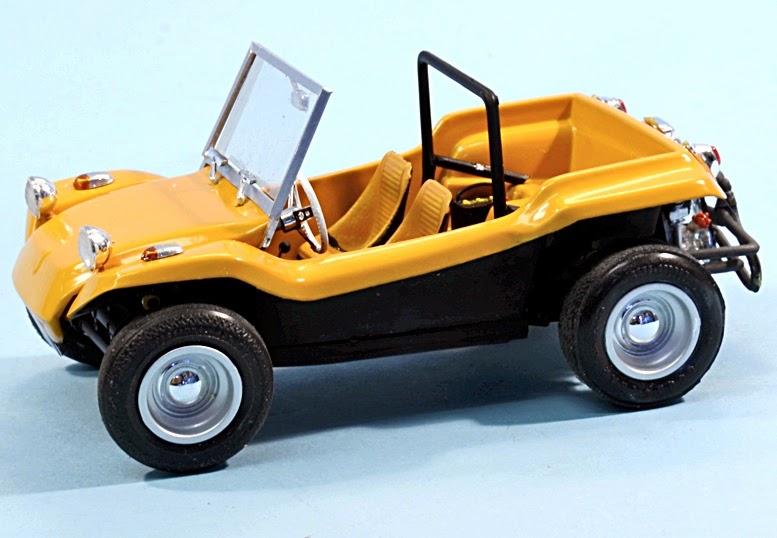 I have a query regarding the overall colour. The box-art shows it in yellow, and the kit has most of the parts moulded in that colour, but movie-stills mostly show it in a more orange shade. However, the film was made in Technicolor which has a notoriously warm colour balance, so this could be an aberration too. 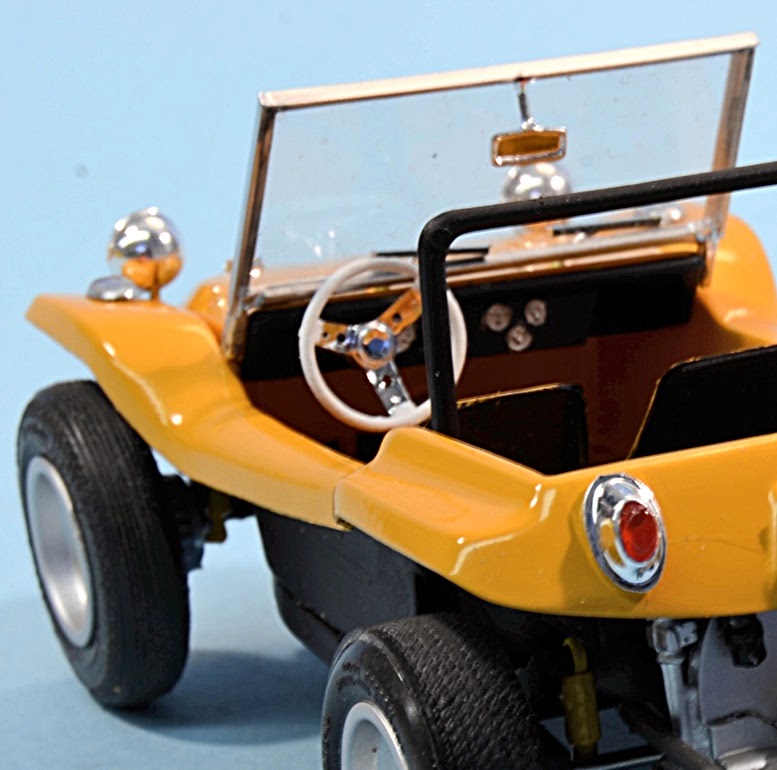 Having first finished the whole kit in yellow from the new Humbrol range, I convinced myself it should be more orange. So I ended up stripping off all the added parts, and respraying the car in the more orangey Testors Go-Mango. 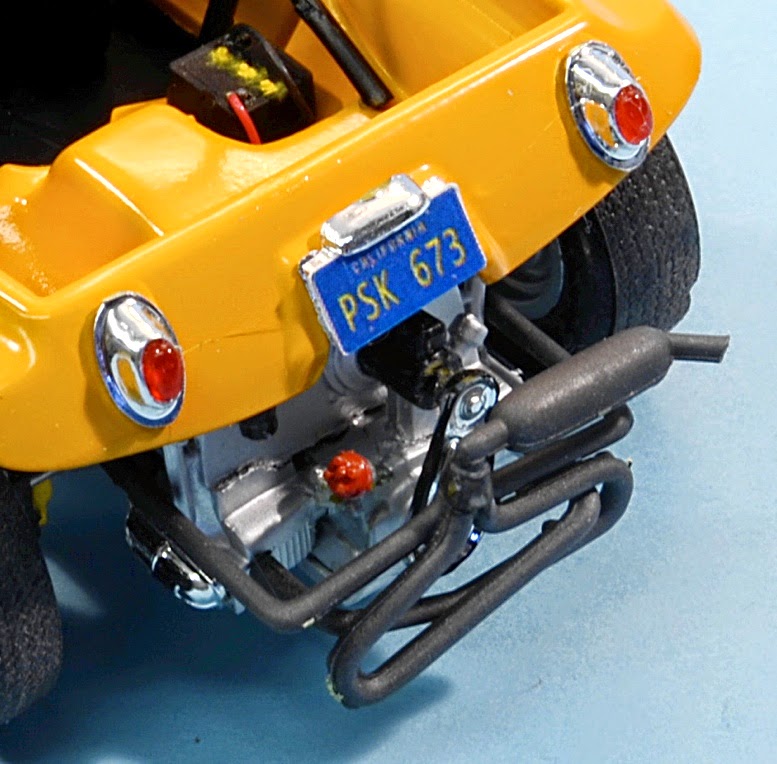 I also made a few other small changes. The windshield frame of the movie version is squarer (and uglier) than the one supplied in the kit. So I used the base of the kit component, removed the original frame, and built a new frame from plastic strip. The windshield glass is clear acetate, cut to fit. 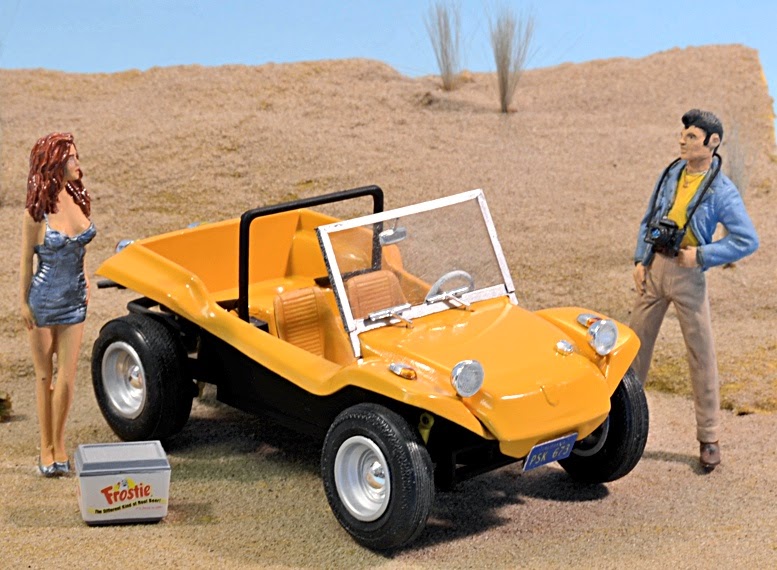 The headlamps as supplied seem slightly too large, so I dived into the bits-and-pieces box and came up with a pair that were slightly smaller. The kit supplies small turn-signal lamps which can be attached near the front, but the movie version has these sitting directly on top of the front fenders - so that meant another hunt in an appropriate spares box!

The beach diorama pictures show the two figures I included in the scene, Elvis cast in white metal, Bernice moulded in resin. More on them below. 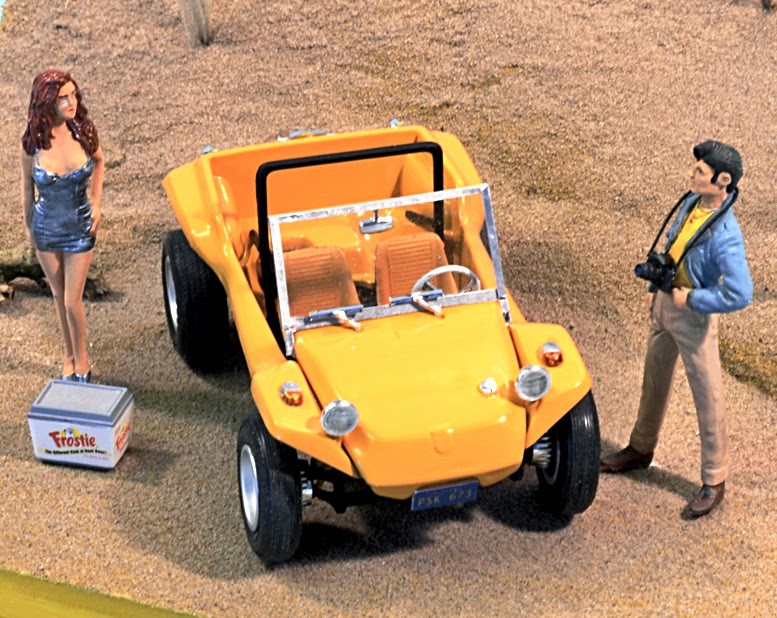 A final change (below) was to the license plates. No movie stills show them clearly, but finally (and after some searching) I found a plate with visible numbers in a publicity photo. So I made a new plate (below right) using a computer app, and printed it out. There is no need to use a decal sheet for this: I just printed the plates out on some reasonably heavy duty paper, and glued them into place. 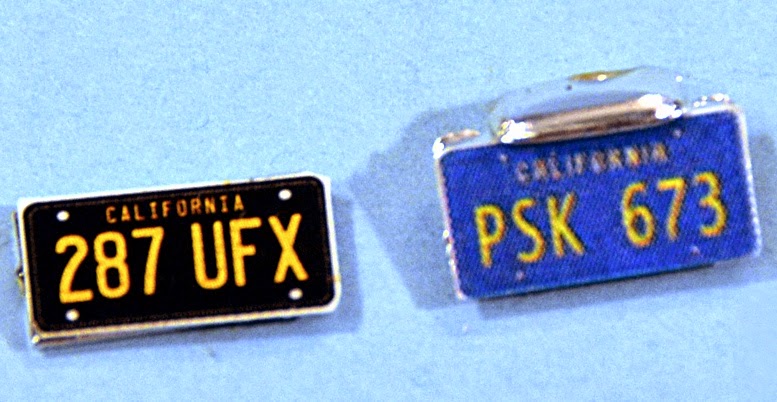 The Meyers Manx is hardly a large vehicle - the AMT 1:25 scale model measures just 125 mm (5 in) long - and the original issue (also reissued a few years ago, so should still be around) came with a card diorama of a burger joint diner, which gave the whole thing a bit more substance than the car alone. This time there is no diorama supplied, so instead I built up a small beach setting, and added two figures.

There are no figures from Live a Little available, so I created an Elvis lookalike from an old white-metal Miniature Autobits figure. His main love interest, Bernice (played by Michele Carey) came from a resin figure produced by Pegasus Hobbies. I added a camera slung from Elvis’s neck, from the Tamiya rally set, I used in the CSI Hummer conversion. Last but not least, I used a cooler box from the short-lived Jo-Han Rambler station wagon reissue, which has given the whole thing a reasonably authentic ‘beach movie’ setting. 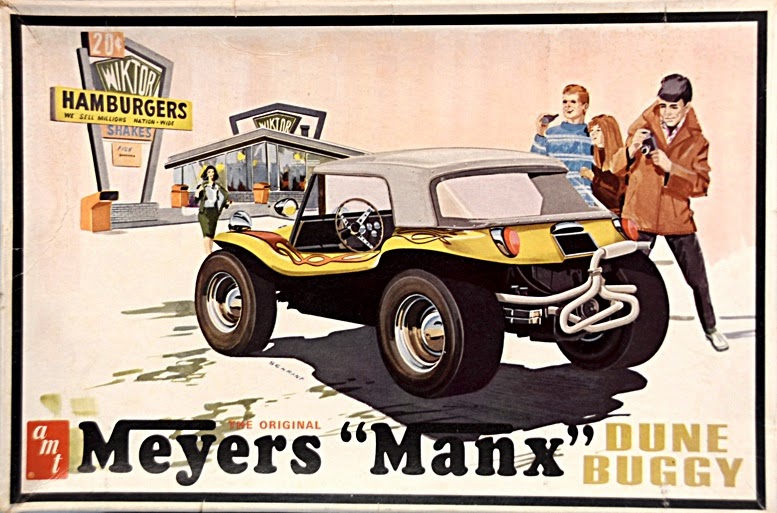 Original first issue (above) of the AMT Meyers Manx. The kit was issued in ‘retro’ form a couple of years ago, the kit including the card diner, with burgers on sale for just 20 cents.

The final model (below) includes new license plates and changes to the windshield frame. The headlamps are slightly smaller, and front indicators are on top of the fenders. 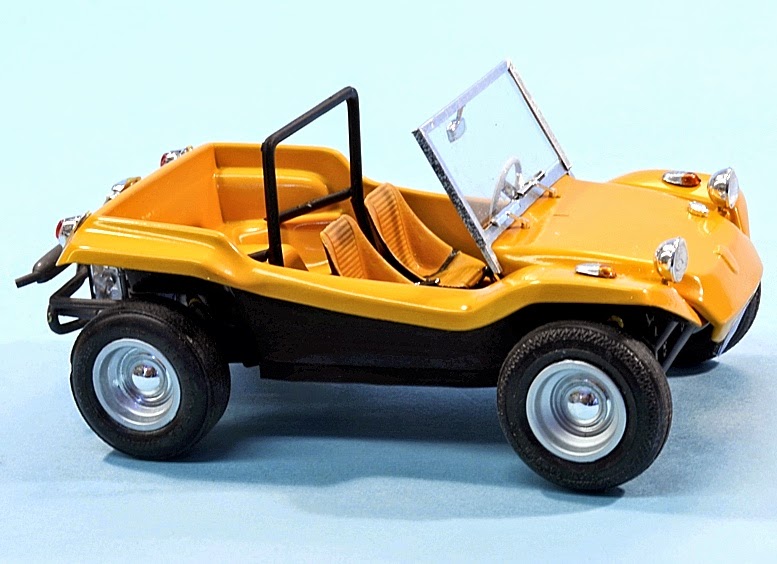 
Oh to be a playboy photographer who clicks with the chicks! Posters and movie stills from Live a Little, Love a Little. 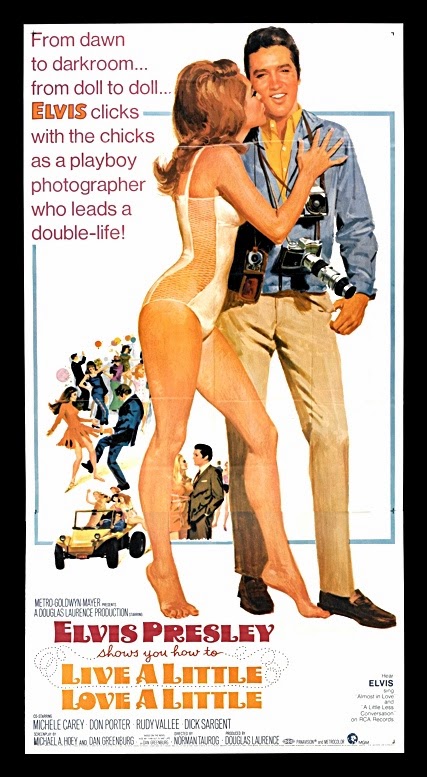 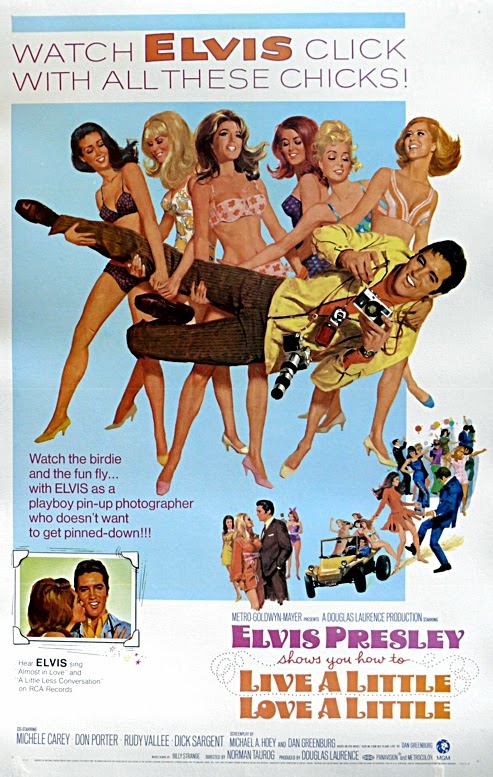 Frame grabs from the movie.

The number plate was finally revealed on this black-and-white publicity picture, Elvis at the wheel.