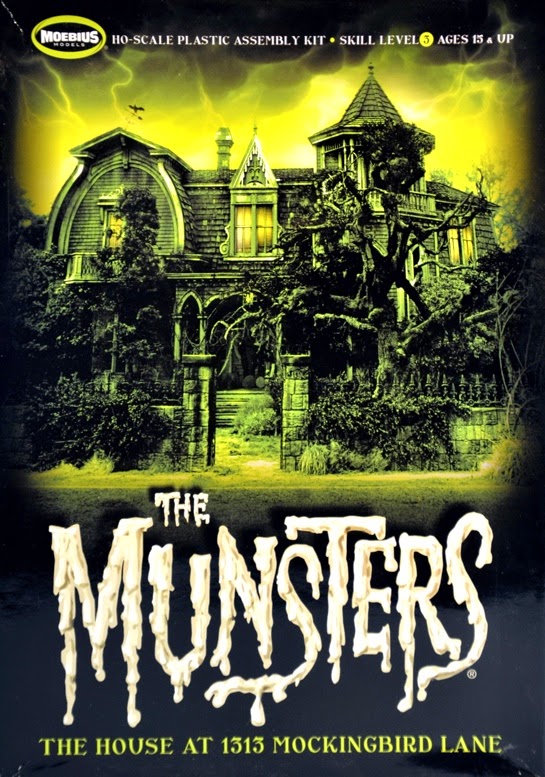 Inspired by the original Aurora kit of the monstrous Addams Family, this Moebius Models production of 1313 Mockingbird Lane is something that Aurora might have made as a kit, way back when.


Mat Irvine: Oddly enough, Aurora did come up a kit called ‘The Munsters’ Living Room’ (recreated as a kit by Polar Lights) but not the house itself. But now Moebius Models have come up with the goods. 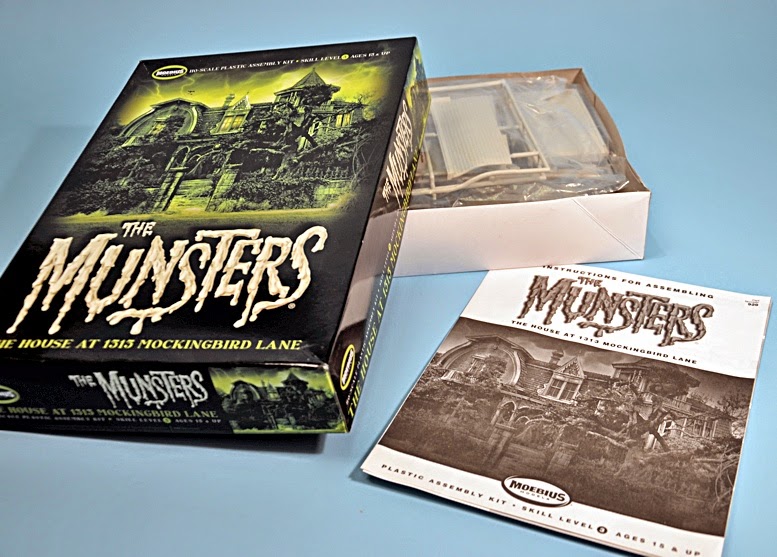 Being a building, rather than a car or plane, construction is slightly different to more usual modelling subjects. Thought has gone into how the finished model could be displayed, and to this end each window, and there are 24 of them, has a transparent insert, with a coloured image of the frames, drapes, cobwebs and the like. This has the reasoning of lighting the model from the inside - but more of this later. 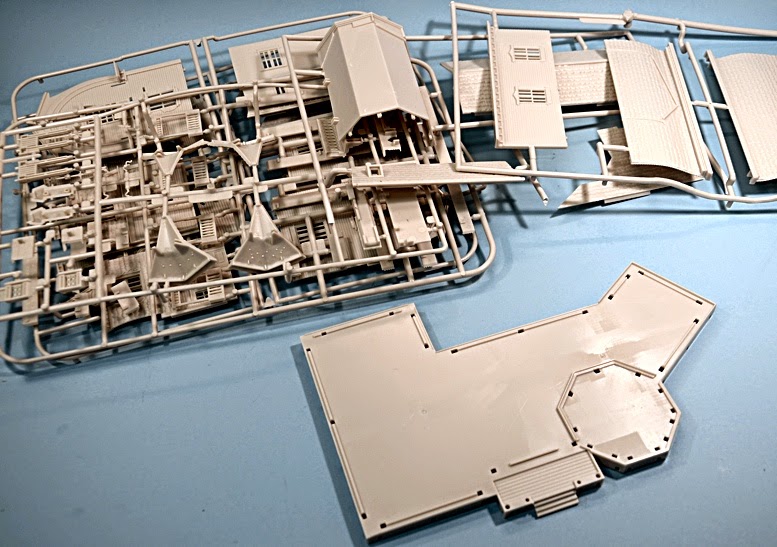 The house consists of four main sections: front door and hallway, three-storey tower section, the back rooms, then the largest section, termed the West Wing. These sections fit onto a single base moulding. If you are planning to add lights, it’s best to drill a few holes in this for the wiring before progressing further, even if they are installed later on. 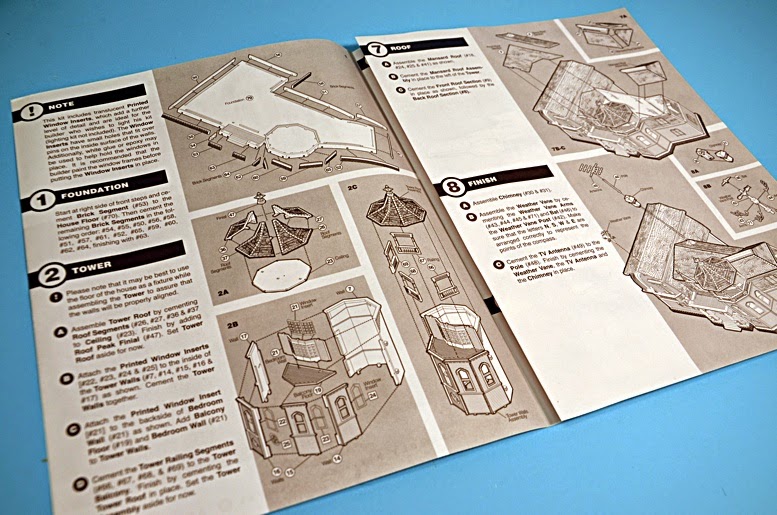 Most of the fun with this sort of model is with the finish, as 1313 Mockingbird Lane is not perhaps the easiest property for an estate agent (or realtor) to describe. ‘Has individual charm, ideal for DIYer, needs some renovation’ all spring to mind. As with any model building, it’s best if you start with an overall primer coat, then add details on top. 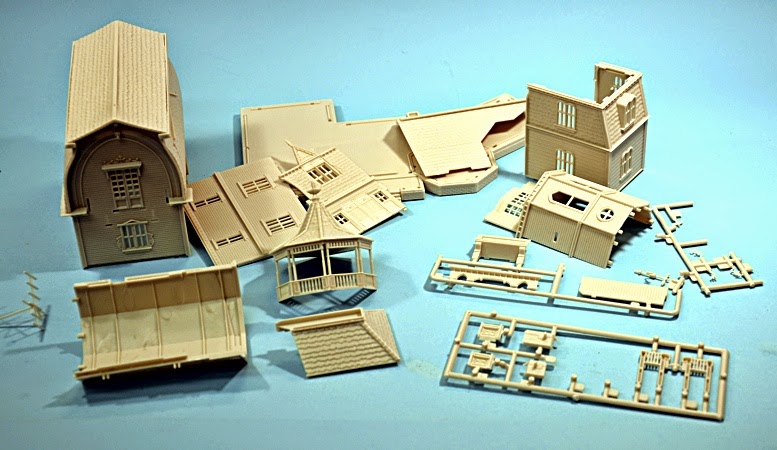 The house as seen in the TV series (and it was a real structure) was mostly white for the columns and window frames, with cream walls, and brown roof shingles. But the house definitely needs finishing with grimy washes, and dry-brushed weathering into the shingles and siding.

Checking the window inserts (below) against the instructions. 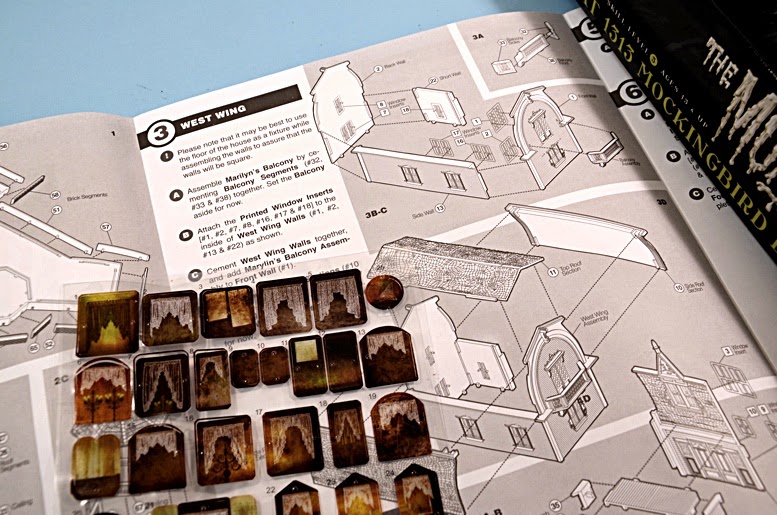 Actually, you could argue that the colouring is somewhat irrelevant, as the TV series was shot in black-and-white for all 70 episodes. Only the movie Munsters - Go Home. and sequels including The Munsters Today and most recently Mockingbird Lane were in colour, so you have the possible alternative of painting it in 50 shades of grey… 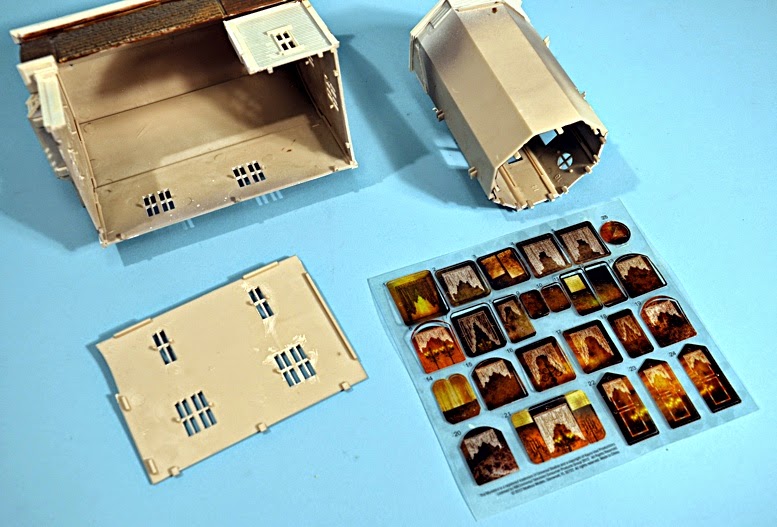 At least three aftermarket companies have produced detail-up parts for this kit. ODG Studios make a resin base, dead tree and the Munsters’ pet, Spot, digging his (its?) way under the house. ParaGrafix makes a set of resin walls and a photo-etch brass sheet for the gates and railings, plus fine-scale replacement parts for the TV antenna and weather vane. You even get 2D in-scale representations of the family. Finally, VooDooFX makes a lighting kit, and this can take full advantage of all those transparent windows. 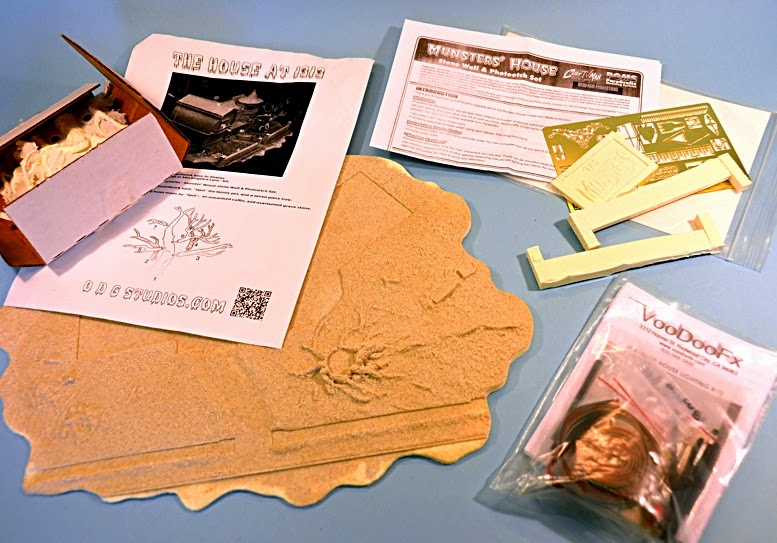 All three kits are available from CultTVMan 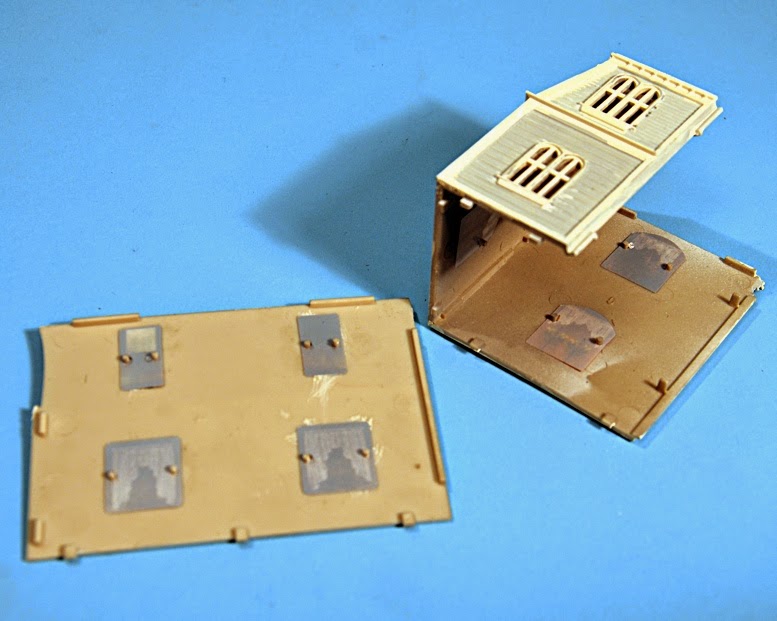 History of the building
Although suiting The Munsters perfectly as the Munster Mansion, the structure had been built by Universal in the mid-1940s, later being relocated to the back lot as a standard American Victorian-style building, appearing in a number of movies and TV shows, Wikipedia listing no less than 24 of them!

Fitting the inserts (below) and testing them against a light source. 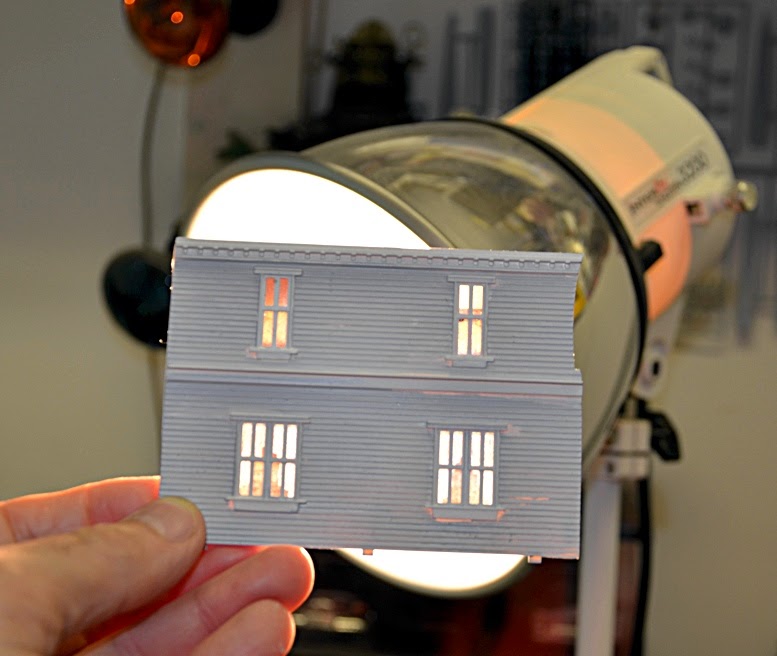 The house also appeared in Dragnet (TV and movie), Murder, She Wrote and The Incredible Hulk. Its oddest showing is probably the most recent, for after much remodelling it found a second life as ‘4351 Wisteria Lane’ in the hugely successful TV series, Desperate Housewives.

However, it was as The Munsters’ home that the mansion found true fame.  The shots of the finished model (below) show that the kit can be assembled to make a really convincing miniature, with the bonus of window lighting for those night time scenes. 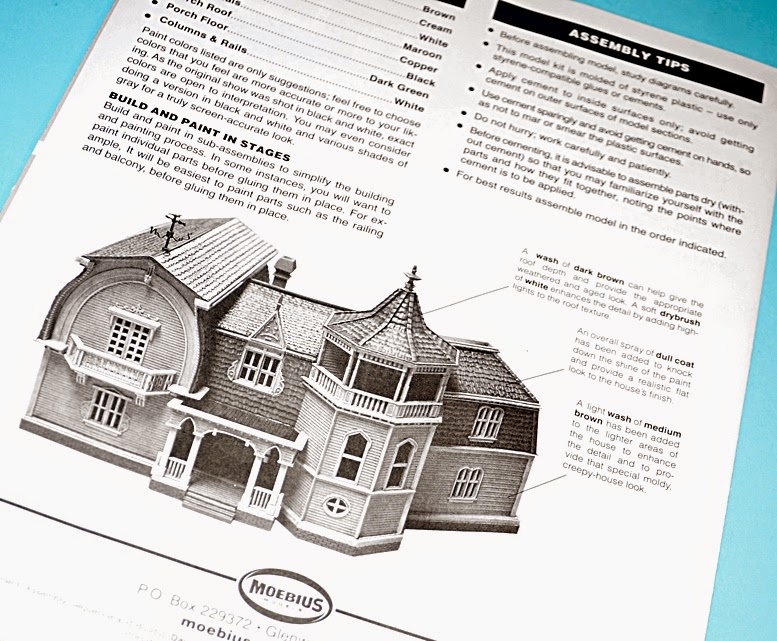 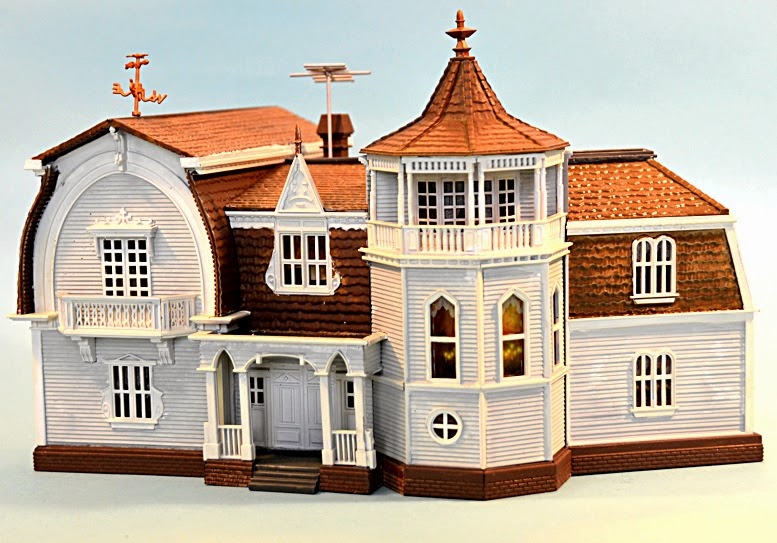 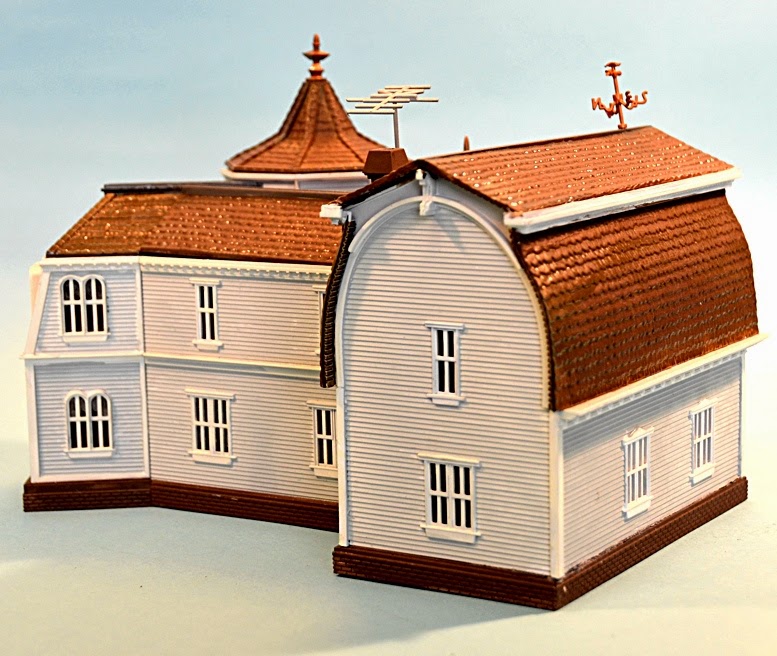 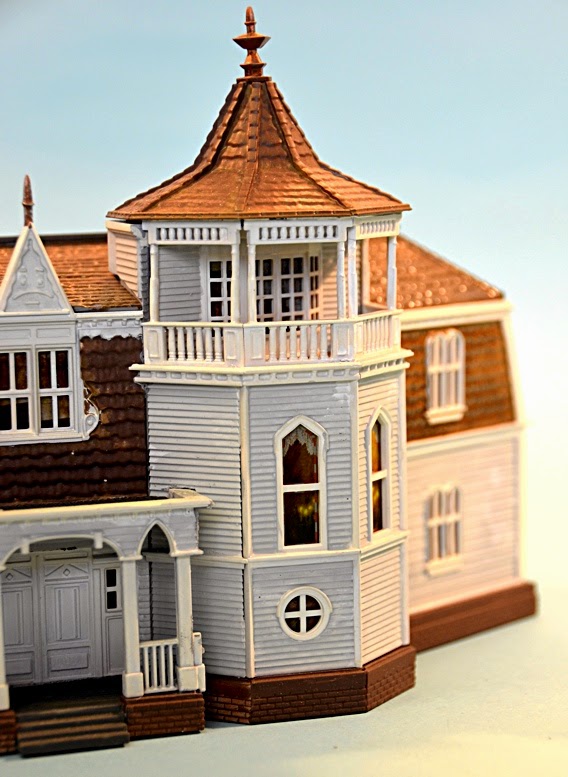 Thanks to Moebius Models for the review kit, and to CultTVMan for sourcing the aftermarket kits.